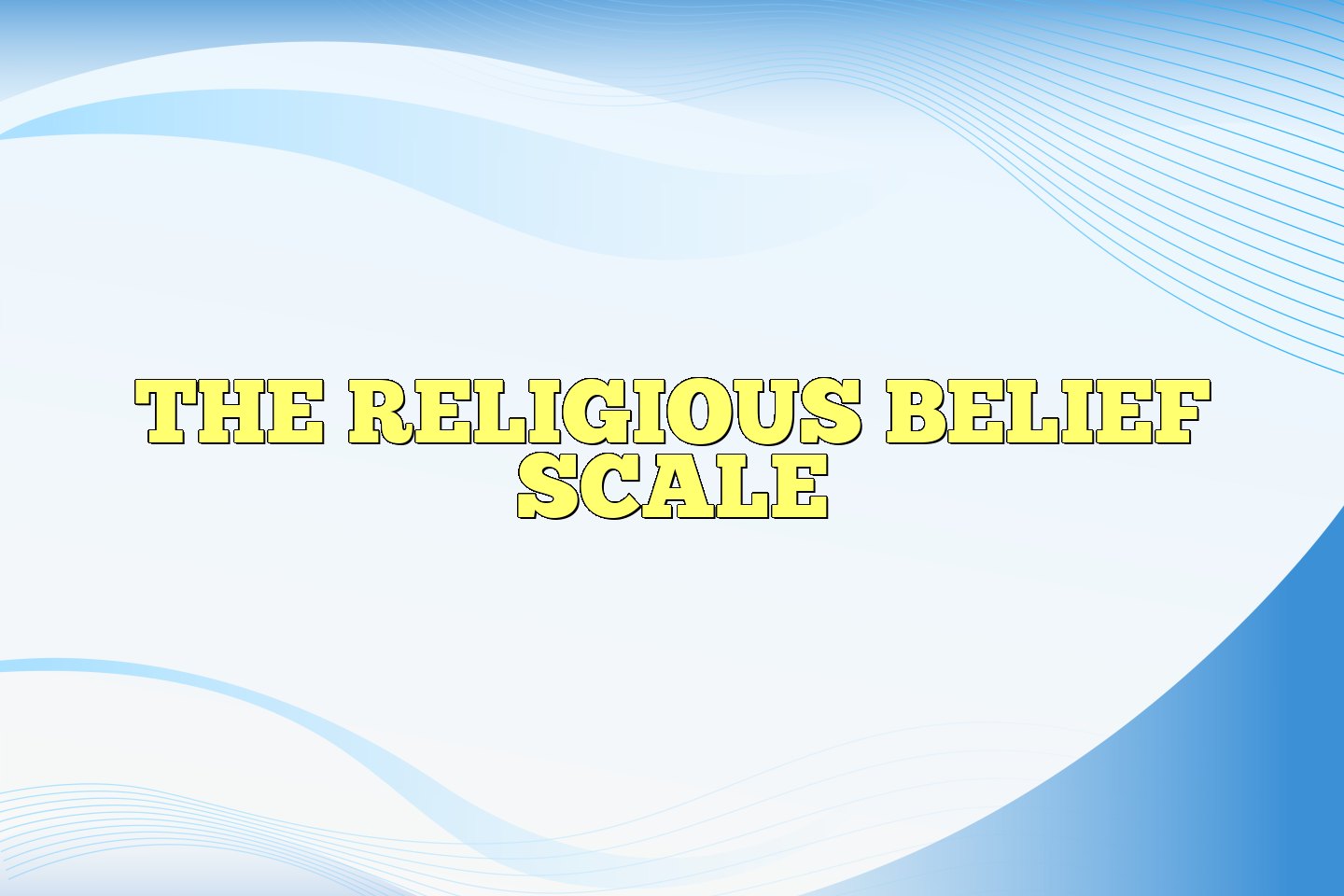 The Religious Belief Scale (RBS) was developed as a measure of Judea-Chris­ tian religious belief in individuals. The con­ tent of the RBS items centers around "belief. . . in the Bible, in the efficacy of prayer, in an afterlife, in a personal God who is near and present, in the divinity of Jesus, and in the church and religion as necessary for a good life" (Martin & Nichols, 1962, p. 4). The RBS measures acceptance of religious teachings and positive valuing of religion (Shaw & Wright, 1967).

Martin and Nichols (l 962) borrowed items from several established re­ligious belief scales and wrote additional items for an initial pool of 50 items. The au­thors specifically developed the RBS to test certain personality and demographic correlates of religiosity. Nine items were dis­ carded due to nonsignificant correlations with the total score in a sample of 80 sub­ jects. The resulting 41-item true-false in­ventory (see appendix) constitutes the RBS. Subjects respond "true" or "false" to each item on a separate answer sheet. Eigh­teen of the 41 RBS items are negative and thus are reverse scored. One point is scored for each positive item marked "true" and one point for each negative item marked "false." Points are summed for the total RBS score, which can range from O to 41. High scores suggest acceptance of religion and religious teaching (Shaw & Wright, 1967).

This paper-and­ pencil measure requires no special examiner skill to administer, score, or interpret. In­structions are printed on the test form, which directs the subjects to respond either "true" or "false" to every item on the basis of their agreement or disagreement that the item content is true about them.

The only data available regarding the RBS were obtained from a sample of 163 undergraduate college students. Fifty-nine male and 104 female students completed the RBS in a group testing situation. No additional data regard­ ing this sample was reported. Unfortu­nately, Martin and Nichols ( 1962) only reported correlations for the RBS with other variables and neglected to report the sample mean and standard deviation. To date, there is no normative data regarding the RBS.

Using a subgroup (N = 83) of the original sample, Martin and Nichols (1962) reported a Kuder-Richardson reliability coefficient of .95. There has been no subsequent confirmation of the scale's reliability.

Face validity of the RBS items was paramount in item selection. Review of the scale's items suggests considerable homogeneity in content, which is reinforced by the rather high reliability coefficient. RBS items appear to consistently reflect common Judeo-Christian religious teachings. There is little empirical confirmation of the scale's content or construct validity. Martin and Nichols (1962) reported significant positive correlations between the RBS and demo­ graphic variables such as a rural back­ ground, female gender, church membership, church attendance, and having experienced positive parental attitudes toward religion. Contrary to prediction, the RBS was also significantly positively correlated with the Authoritarianism Scale and there was no significant relationship between RBS scores and level of religious information. The au­thors report a curvilinear relationship be­ tween RBS scores and level of information about religion, with subjects in the moderate range of information (biblical and general religious) obtaining the highest RBS scores.

Subsequent Research: A review of the literature revealed no subsequent published re­ search using the RBS.

These items are negative and must be reversed for purposes of scoring.