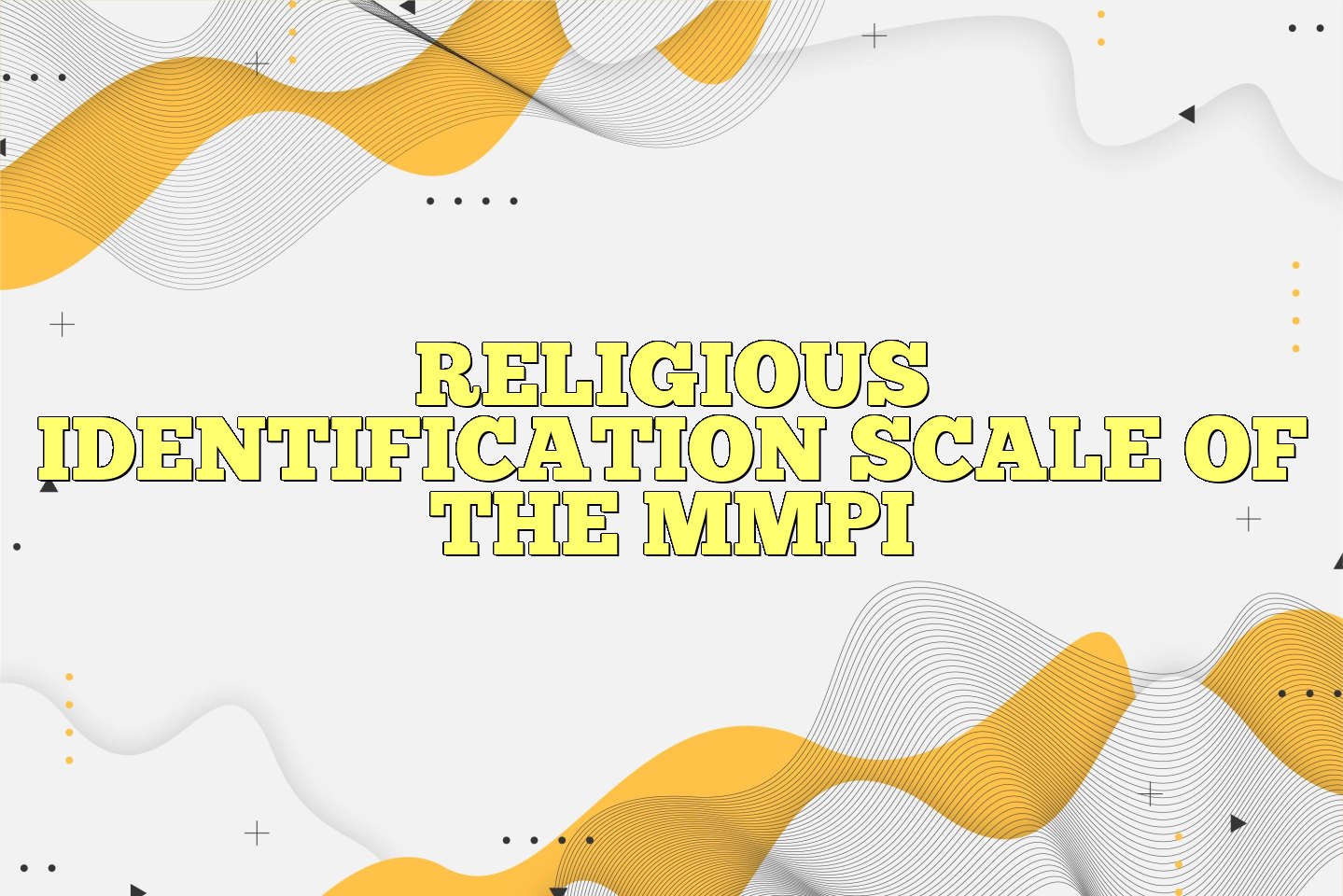 The Religious Identification Scale (RI) is an item content scale from the Min­nesota Multiphasic Personality Inventory (MMPI: Hathaway & McKinley, 1951) de­veloped by Panton (1979). The RI was in­ tended to reflect the individual's "identifica­tion with and participation in religious activities irrespective of faith or denomina­tion within a faith" (Panton, 1979, p. 588). High RI scores imply belief in and identifi­cation with a religious faith as well as indi­vidual or collective participation in the wor­ship tradition of that faith. Low RI scores reflect little or no participation in religious worship, lack of identification with reli­gious principles and/or rejection of religion altogether (Panton, 1979).

Panton, a prison psychologist, had discovered from experience and previous unpublished research that inmates who had identified with and participated in religion prior to incarceration often made a more ade­ quate adjustment to prison confinement than inmates without such a religious identifica­tion. Panton reasoned that a measure of reli­gious identification would facilitate prediction of adjustment versus maladjustment among the inmate population.

Hathaway and McKinley's (1940) origi­nal MMPI item pool of 550 statements were classified into 26 item categories. Category 15, "religious attitudes," was composed of 19 religious-content items. Panton (1979) subjected these items to rational-intuitive evaluation based on each item's manifest re­ligious content. Five of the 19 items were rejected secondary to their implication of a psychotic illness (i.e., "my soul sometimes leaves my body"). Two additional items that reflected specific fundamentalist beliefs not shared by most faiths were also rejected. The remaining 12 items composed the RI scale (see appendix).

Approximately half the items reflect broad Judeo-Christian content, with the re­maining items reflecting nonfaith-specific religious content. These items are spread throughout the MMPI and all items are scored 1 if true, with the exception of items 369 and 491, which are scored 1 if false. The RI shares 10 items in common with the Reli­gious Fundamentalism Scale (REL: Wig­ gins, 1966) and it is unclear why Panton does not refer to the REL in his development of the RI. Given the significant item overlap between these scales, one must assume the REL and RI tap largely the same construct. However, two items contained in the REL and not the RI reflect more overt fundamen­talist beliefs (i.e., "everything is turning out just as the prophets of the Bible said it would") and thus some distinction between scales may be warranted. The RI items ap­ pear congruent with the "identification" con­ struct or what may best be described as ad­herence to religious belief and behavior. Norms are reported in terms of raw scores, which range from O to 12 (higher scores in­dicating greater religious identification). Panton's (1979) article also offered a T-score conversion table for the RI scale.

Unfortunately, available normative data is based on stan­dard administrations of the full MMPI. While no norms are available for separate administration of the RI items, research indicates minimal effects on results when sin­gle MMPI scales are administered sepa­rately (Perkins & Goldberg, 1964). The MMPI contains 566 items, which cover a range of subject matter from physical condi­tion to the subject's moral and social atti­tudes. Time for administration varies but rarely exceeds 90 minutes. Subjects must have a sixth-grade reading level and are in­ structed to respond true or false to every item. The MMPI is easily self-administered and requires no extra instruction or supervi­sion. RI scale scores must be obtained by hand scoring the 12 scale items. In contrast to the standard MMPI scales, no K-correc­tion or other internal adjustment procedure is available to correct for self-favorableness versus self-criticalness on the RI scale. Due to their controversial nature, nearly all of the RI items were deleted during develop­ment of the MMPI-2 (Butcher, Dahlstrom, Graham, Tellegen, & Kaemmer, 1989), making it impossible to calculate the RI from MMPI-2 data.

The RI scale was normed on an initial sample of 234 male prison inmates (Panton, 1979). Panton did not report demographics such as age, race, education, or crime classification for the sample. One hundred seventeen of the in­ mates had been referred for evaluation due to difficulty adjusting to the prison environment (maladjusted sample). One hundred seven­ teen additional inmates were randomly se­lected from the population of inmates who had adequately adjusted to incarceration (ad­justed sample). The mean RI score for the ad­justed sample was 8.8 (SD = 1.5; Range = 5-12), whereas the mean for the maladjusted sample was 4.0 (SD = 1.9; Range = 0-8). A second "validation" study was reported by Panton (1979) utilizing similar samples of adjusted (n = 100) and maladjusted (n = 100) prison inmates. In this study, the mean RI scores were 9.1 (SD = 1.5) for the adjusted group and 4.6 (SD= 1.7) for the maladjusted group. The only other study to employ the RI scale (Megargee & Carbonell, 1985) also uti­lized a prison population. In a sample of 1,214 male offenders, the mean age was 22.2, the mean Beta I.Q. was 100.83, and the mean highest school grade attended was 9.85. Sixty-four percent of the sample were white and 35% were black. The authors reported a mean T score on the RI of 52.89 (SD = 14.21). Additionally, the mean score for black inmates (54.32) was significantly higher than the mean score among white in­ mates (52.12) at the .0 l level of significance.

Neither the original develop­ment study by Panton (l 979) nor the subse­quent validation study (Megargee & Car­ bonell, 1985) offers information regarding the reliability of the RI.

In developing the Religious Identi­fication scale, Panton (1979) attempted to ensure the scale's content or face validity through careful item selection. Panton 's only attempt at empirical validation of the RI involved a demonstration of criterion-re­lated validity using the method of con­trasted groups. Utilizing distinct groups of adjusted versus maladjusted prison inmates (described earlier in this review), Panton found that an RI cutting score of 7 success­ fully identified 89% of the maladjusted and 95% of the adjusted sample. Between-group differences in mean RI scores were signifi­cant (t = 21.34, p < .001). A second study with similar prison samples confirmed these findings, with the RI effectively identifying 90% of a maladjusted sample and 94% of an adjusted sample (t = 20.45, p < .001).