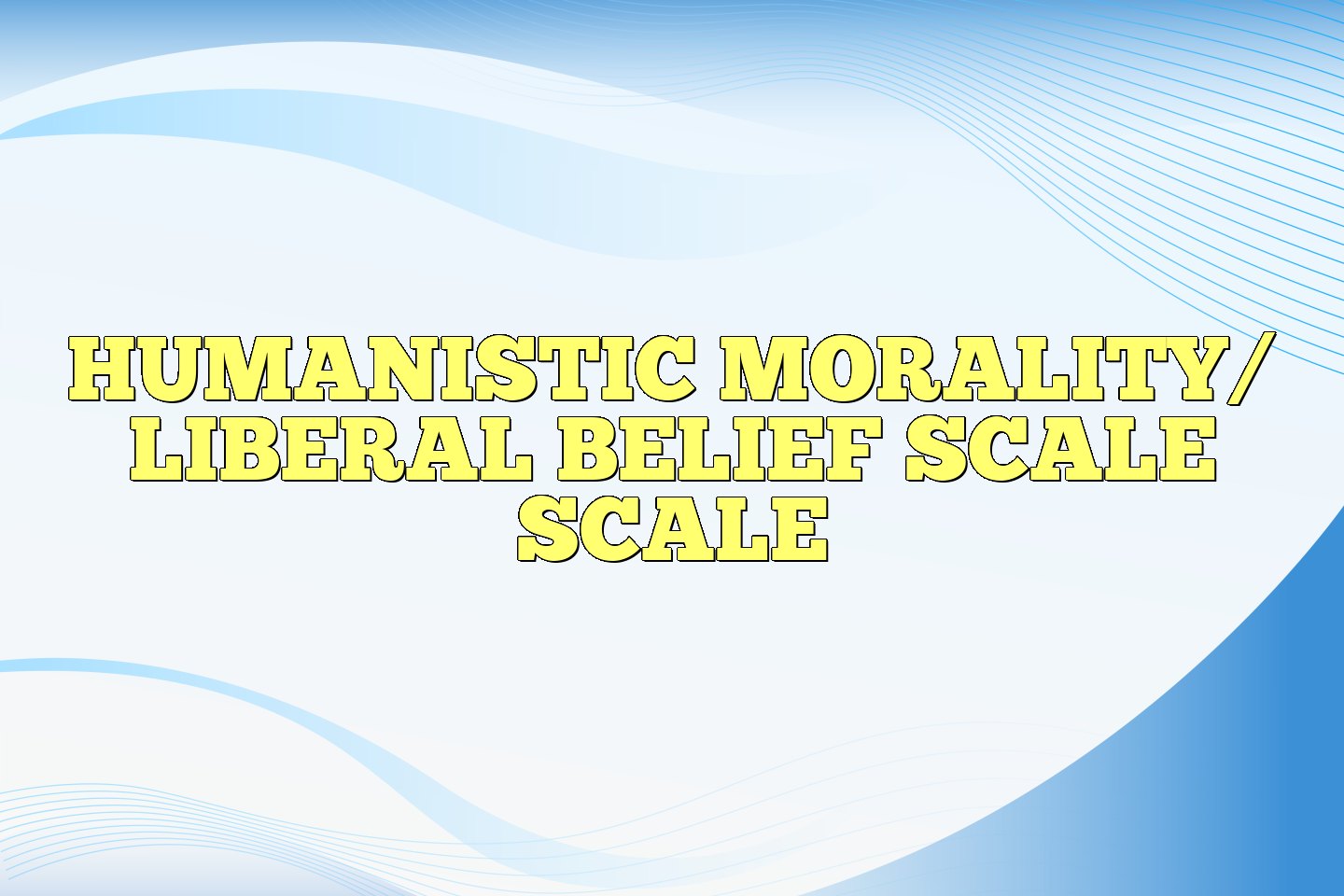 The Humanistic Morality and Lib­eral Belief Scales were developed by Nor­wegian psychiatrist Eystein Kaldestad as part of a larger effort to create a battery of measures usable with Norwegian subjects in studies of the relation of religiosity to personality and mental health. Several of the scales he employed are translations of reli­giosity measures prominent in the English­ language literature (e.g., the Allport-Ross Intrinsic and Extrinsic Scales and Batson's Quest Scale; see Kaldestad, 1991). Con­cluding that these established scales do not adequately assess the increasingly liberal re­ligious views found today among Norwe­gians, 92% of whom are at least nominal members of the Norwegian Lutheran State Church, Kaldestad developed his Liberal Belief and Humanistic Morality Scales. Available now in English translation, they should be serviceable in other countries as well.

Kaldestad's Liberal Belief Scale takes its inspiration from Andrew Weigert's (1988) delineation of liberal and fundamentalist types of Christian eschatol­ogy. The scale consists of eight items, all of which are positive expressions of the liberal point of view. Responses to each item are made on a 5-point Likert scale, ranging from "strongly agree" (5) through "do not know" (3) to "strongly disagree" (1 ). Total scale scores are calculated by finding the mean rating that was given the eight items.

Kaldestad's Humanistic Morality Scale, which was designed to give expression to the more permissive and relativistic morality that emerged in Norway following World War II, started out as a five-item scale but was expanded to eight items to raise its reli­ability. Once again, all statements are writ­ ten as positive expressions of a liberal per­spective. Subject responses are made on the same 5-point scale, and total scale scores are calculated as above. The Humanistic Morality Scale correlates about .70 with the Liberal Belief Scale, which indicates that they have virtually half of their variance in common.

These two scales are brief enough that researchers could eas­ily include them with other religiosity mea­ sures. Kaldestad suggests, however, that new versions of these scales might first be in order, especially to eliminate one of the two potentially conflicting elements in each of the first three items of the Liberal Belief Scale as well as to make the scales more in­ ternally homogeneous. Given the relatively high correlation between the two scales, re­ searchers could also consider combining them into a single liberalism scale.

Like many other scales of their type, these two are intended for use strictly as research instruments. Thus no norms have been made available for interpreting individual scores. Kaldestad's (1992) original report on these scales does contain some means and stan­dard deviations that could be use for com­parative purposes.

Content validity of the scales was assessed by asking, on two occasions, a total of 15 theologians to sort the randomly arranged statements into their respective scales. On both occasions, all of the theolo­gians sorted the Humanistic Morality Scale items without error. There was similar una­nimity for six of the eight items on the Lib­eral Belief Scale and the great majority con­curred on the remaining two.

Convergent validity-the tendency of a scale to correlate appropriately with similar or related measures-was first demonstrated by comparing the mean scale values of a group of persons who said that they "strongly agree" with the statement "I am a believing Christian" with the means of all those who gave a less confident answer (but did not strongly disagree). For both scales, the more hesitant believers scored signifi­cantly higher, on the average, than the firm believers. Much as we might expect, the Liberal Belief Scale correlated -.59 with Batson and Ventis's Doctrinal Orthodoxy Scale and -.48 with Woodrum's Moral Con­servatism Index. It also correlated .37 with Batson's Quest scale, and -.43 and .49 with the Allport-Ross Intrinsic and Extrinsic scales, respectively. The Humanistic Moral­ ity Scale correlated -.50 with the Moral Conservatism Index, -.58 with the Doctrinal Orthodoxy Scale, .48 with the Quest Scale, -.46 with the Intrinsic Scale, and .56 with the Extrinsic Scale. The correlations with the Allport-Ross Scales, which are consistent with findings in earlier studies, suggest that these widely used scales incorporate more of the liberal/conservative dimension than they were originally intended to have.

The factorial validity of Kaldestad's scales, finally, was examined by factor-ana­lyzing each of the scales separately and then in combination with the Moral Conser­vatism Index and the Doctrinal Orthodoxy Scale. Factor-analyzed separately, the Lib­eral Belief Scale yielded two factors, ac­ counting for 37.0 and 16.8 percent of the variance, respectively. The first of these factors, which includes items I, 2, 4, and 5, would seem to be a biblical literalism fac­ tor. Factor analysis of the Humanistic Morality Scale likewise yielded two factors, explaining 42.5 and 14.3 percent of the variance, respectively. When these two scales were factor-analyzed with the other two, their items tended to be scattered among four or five of the resulting seven factors, suggesting to Kaldestad that the scales may not be sufficiently homoge­neous. As Anastasi (1988) points out, how­ ever, scale homogeneity is not a virtue when the criterion is itself heterogeneous, as is likely in this case.

Slightly revised versions of several of the statements, along with further discussion of the scales' reliability and validity, can be found in

In his continuing in­vestigations of the relation of religiosity to personality and mental health, Kalkestad has found that nonpsychotic psychiatric patients tended to score higher than nonpatients on both the Liberal Belief Scale and the Humanistic Morality Scale. Furthermore, the two scales showed low but significant positive correlations with the Obsessive and Hysteri­cal scales of the Basic Character Inventory.

Weigert, A. (1988). Christian eschatological identities and the nuclear context. Journal for the Scientific Study of Religion, 27, 175-191.