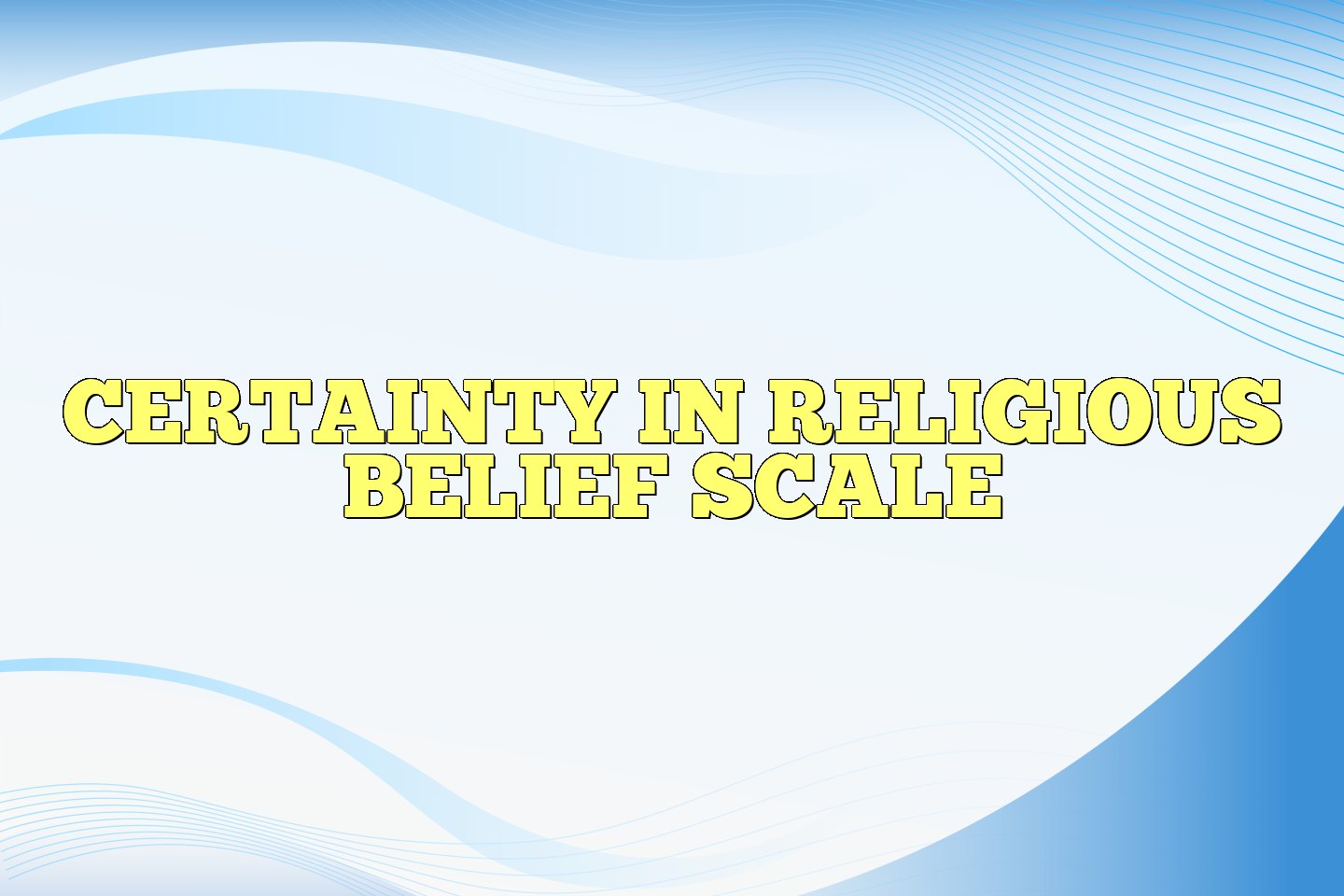 The Certainty in Religious Belief Scale was designed to measure a tendency toward certainty with regard to religious belief. Religious beliefs and attitudes, like all beliefs or attitudes, can be held with surety and passion or can be tentative and superfi­cial. Although the certainty of belief is im­portant, it represents only one aspect of religiousness.

The scale includes 40 items, 25 of which are religious. The other items are either nonreligious factual statements, political viewpoints, or philosophical state­ments that have little or no relation to reli­gion. Because many of these other state­ments reflect the culture and time period in which the scale was written (e.g., "The total national debt of Great Britain is more than a thousand million pounds."), it is recom­mended that the nonreligious items be dropped from the scale. Hence, what is re­ produced in this volume are only the 25 reli­gious items. It should be noted that Thou­ less's intent was to measure the degree of certainty held with religious versus nonreli­gious beliefs, and hence he included both types of belief in his measure. With the par­ticular items used, Thouless found that reli­gious beliefs maintained greater certainty.

The respondents are asked to indicate the degree of certainty with which they believe or disbelieve statements on a 7-point Likert­ type scale ranging from "complete cer­tainty" that the item is true (+3) to "com­plete certainty" that the item is false (-3). Ratings of 2 indicate a strong conviction, but not amounting to certainty, that the item is true (+2) or false (-2). Ratings of 1 (posi­ tive or negative) indicate greater tentative­ ness about the truthfulness or falseness of the item, and a rating of O demonstrates total uncertainty. The average degree of cer­tainty was determined by summing the scores on the items (disregarding signs) and dividing by the number of items. The possi­ble range was therefore O to 3. Thus, this scale measures neither belief content nor di­ rection, but the degree of certainty with which a religious belief is held.

This brief, self­ administered scale requires no special con­siderations for administration.

Thouless's origi­nal sample consisted of 138 students at the University of Glasgow, Scotland, during the early 1930s. The students were a "heteroge­neous collection of subjects of various occupations and of both sexes and of all ages from twenty upwards" (p. 17). The mean degree of certainty of the religious items was 2.13 with a standard deviation of .32.

No measure of the scale's relia­bility was reported.

No direct measure of the scale's validity was reported. Thouless did report a number of research findings that provided, at best, mixed support for the validity of the scale. Thouless had available intelligence scores from a portion of his sample. Con­trary to his expectations, he found no con­siderable decrease (in fact, a slight increase) in the tendency to certainty among those who scored higher on the intelligence tests.

Thouless also devised a measure of or­thodoxy among the scale's items and found that certitude among the unorthodox was just as strong as among the orthodox. Thou­ less discovered no gender differences in the tendency to certainty. These findings may shed light on the scale but should not be in­terpreted as conclusive tests of validity.

Please rate each item below using the following rating scale: