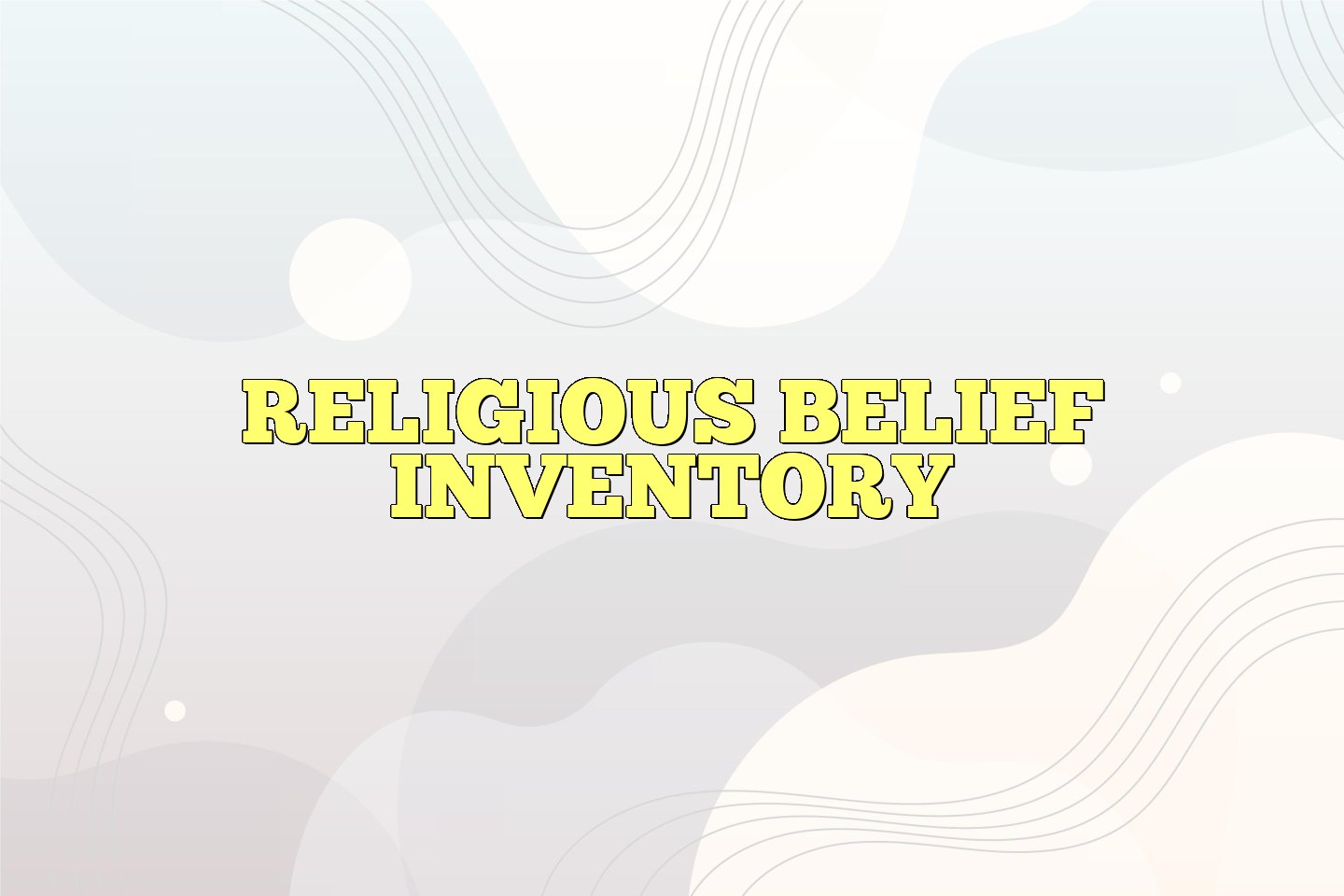 The Religious Belief Inventory (RBI) measures the extent to which one agrees with various doctrines of religious faith. It was based on the premise that "reli­gious beliefs cluster in homogeneous pat­ terns, as indicated by the existence of theo­ logical systems within the history of Christian thought" (Lee, 1965, p. l ). Lee developed this measure primarily to aid him with empirically investigating the relation­ ship between theological belief and person­ality.

The Religious Belief Inventory (RBI) consists of the following seven scales: Fundamentalism, Orthodoxy, Hu­ manism, Scientism, Puritanism, Pietism, and Liberalism. This multidimensional reli­ gious belief inventory was designed to re­ flect various historical currents within Methodism. However, Lee hoped that the RBI would generalize from Methodists to Protestants in measuring religious trends.

Each of the seven scales of the RBI con­ sists of eight items. In addition, the RBI has four ad hoc items designed to stimulate fu­ture research. Thus the entire RBI consists of 60 items.

Each item on the RBI is scored on a 5- point "agree-disagree" continuum. A sepa­ rate score is obtained for each of the seven scales. Four of the eight items on each scale are reverse scored. Each scale is scored by, first, reverse scoring the appropriate four items and, second, summing across all eight items. Possible scores for each scale range from Oto 32.

Practical Considerations: This measure is self-administered and takes approximately thirty minutes to complete.

Several caveats are offered for the inter­pretation of this scale, arising from the pre­ sent author's experience of administering it to lay church members. First, the negatively worded items confused some people. Sec­ond, the use of sophisticated language made a number of items difficult to comprehend (e.g., "fallible," item 4, and "natural procre­ation," item 20). Third, obscure scriptural references made some items difficult for people to know how to respond. For exam­ ple, when the RBI was administered to lay members of fundamentalist churches, a sur­prising number of them asked if item 47 ("When Joshua commanded the sun to stand still, it did so.") was really in the Bible. They added that if it was, they would score the item "strongly agree" and that if it was not, "strongly disagree." Overall, these three caveats suggest that this measure would be more suitable for a seminary or clerical population than for laypersons.

A fourth caveat regarding this scale in­ volves the lack of gender-neutral language. Future revisions of this scale would be able to rectify this with substitutions such as "people" for "man" (e.g., item 43: "People are not sinful, merely foolish").

The Garrett Theological Seminary sam­ple consisted of 302 students (27 l males; 31 females), with an impressive response rate of 85%. Means and standard deviations ob­tained from this sample were as follows:

Lee found that only three of the original seven scales were reliable and ho­mogeneous: Fundamentalism, Orthodoxy, and Humanism. As a result, Lee revised the RBI and administered it to a sample of l l l of entering Garrett Theological Seminary students. Reliability statistics on the revised RBI found only Fundamentalism and Ortho­ doxy Scales to be reliable. Due to this unex­pected finding, Lee recommended that fu­ture research on the RBI use the revised version of the measure, with the exception of inserting the Humanism Scale from the original RBI. (The "combined" version of the RBI is included in the appendix of this review as Lee recommended, i.e., the re­ vised RBI with the original Humanism Scale). The revised RBI's most effective component was the Puritanism Scale, which was found to be significantly more reliable than the original version of the scale.

Overall, the following four Scales of the combined RBI were found to be sound, reli­able, and homogeneous: Fundamentalism, Orthodoxy, Humanism, and Puritanism. Guttman reproducibility coefficients (a measure of homogeneity) were excellent for each of the four scales, respectively: .93, .88, .88, and .94. The Kuder-Richardson re­ liability coefficients were, respectively: .72, .69, .50, and .62. Split-half reliability coeffi­cients were, respectively: .70, .54, .45, and .60. Of all the scales, the Fundamentalism scale was found to have the strongest psy­ chometric properties.

The validity of the Fundamental­ ism, Orthodoxy, Humanism, and Puritanism scales were investigated by administering the RBI to a seminary sample, a secular uni­versity sample, and an agnostic/atheistic sample. The Fundamentalism scores were significantly lower for the agnostic sample than for the other two groups. The same pat­ tern was found for scores on the Orthodoxy and Puritanism Scales. On the Humanism Scale, the atheistic/agnostic and secular uni­versity students both scored significantly higher than the seminary sample. Thus, the scores obtained from these three samples supported the validity of all four of these scales.

Lee developed the RBI, in part, to aid him in testing the hypothesis that the seven orientations of religious belief were differ­entially associated with intelligence and personality styles. He tested these hypothe­ sis by correlating RBI scores in his Garrett sample with scores obtained on the Wech­sler Adult Intelligence Test, Rorschach Inkblot Test, and Crowne-Marlowe Social Desirability Test. While his particular hy­potheses were generally not supported, he nevertheless did find other significant re­sults. Thus Lee found that the RBI could be used to glean valuable information on the personality characteristics of various reli­ gious orientations. Subsequent research using the RBI has likewise focused on in­vestigatng the relationship between theolog­ ical beliefs and personality styles.