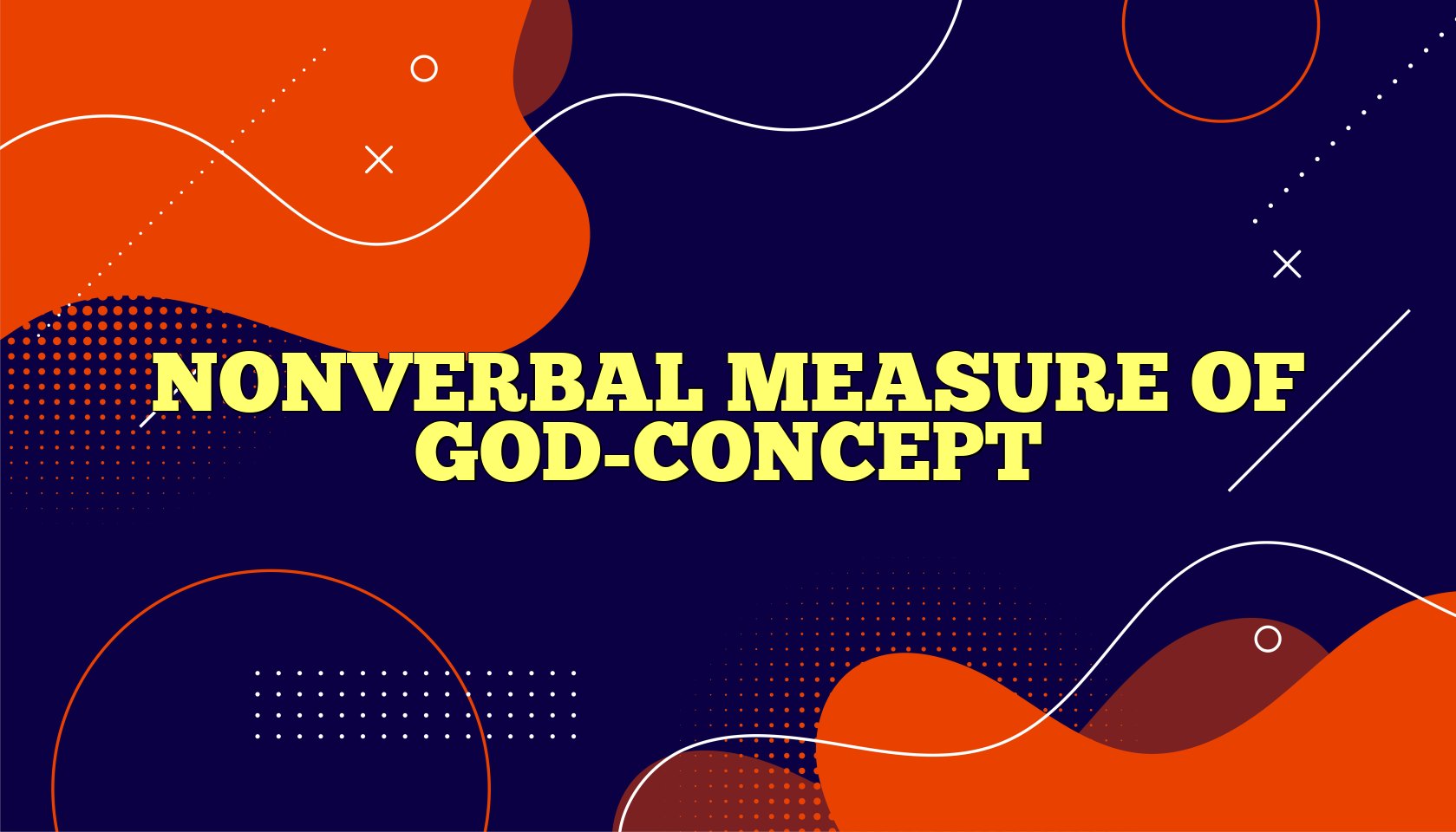 Twenty-one black and white ink drawings printed on 5 by 7 cards constitute the 1990 version of this measure. The ink drawings are either realistic (e.g., a man with a beard, Jesus with children) or symbolic (e.g., cross, flame, and dove). These draw­ings were selected because they reminded subjects from different cognitive stages (pre­ operational, concrete operational, or formal operational) of their God concept. In the 1990 version, 3 drawings were selected by subjects of the age usually associated with preoperational thinking (4-6 years), 4 pic­tures by subjects of the age usually associ­ated with concrete thinking (8-10 years), and 14 pictures by subjects of the age usually as­ sociated with formal operational thinking (12-adult). In the 1994 version, there are 15 drawings. Five drawings each were most fre­quently selected by subjects determined to be in a preoperational, concrete, or formal oper­ational stage by standard cognitive tests. The cognitive tests used to distinguish preopera­tional from concrete subjects were for conservation of volume, mass, and number. The cognitive tests used to distinguish concrete from formal operational thinkers were paper­ and-pencil tests (Lunzer, 1965) for class in­ clusion (e.g., leather is to soft, shoe or hide as hard, clay or house is to brick) and for com­pletion of sequence (e.g., 27, 18, 12, ?, 5½). Among the 15 available pictures selected, two pictures "seemed to differentiate the pre­ operational thinkers from others" (Bassett et al., 1994, p. 47) and five pictures "seemed to differentiate the formal operational thinkers from others" (Bassett et al., 1994, p. 47).

The three stages of cognitive develop­ment in which this measure is "loosely an­chored" (Bassett et al., 1990, p. 20) can be identified as follows. Preoperational thought is thinking in only one dimension at a time (e.g., height or width), relying on perceptual information (e.g., authority is determined by size) and confusing causes with their ef­fects. This stage usually characterizes chil­dren 4 to 7 years old. Concrete operational thought is being able to realize that physical dimensions (i.e., number of items, volume, and mass) remain the same despite new ap­pearances (conservation), and being able to recognize subclasses of objects. It is typical of children between the ages of 7 and 11. Formal operational thought is being able to make inferences about unobserved entities and to think about such hypothetical con­ structs as ideas or thinking. It is associated with children 12 years old and above.

The authors offer this measure as a start­ing point in nonverbal research, and rightly so: there are reasons to be concerned about how well these drawings can differentiate be­ tween Piaget's stages of cognitive develop­ment. Utmost caution needs to be exercised when considering how graphic representa­tions may reflect cognitive ones (Kosslyn, Heldmeyer, & Locklear, 1977). But as these drawings were developed, Piaget's stages of drawing development (i.e., synthetic inca­pacity, intellectual realism, visual realism) were not taken into account (Piaget & In­ helder, 1969). The forms that graphic repre­sentations take can change and may provide information about mental representations that goes beyond the development of drawing ability. For when a young child's limited ability to draw is controlled (e.g., using cutout parts), how the child forms her or his graphic representations corresponds with the undifferentiated representation seen in her or his own drawings (Bassett, 1977).

When preoperational 4-year-olds draw, they juxtapose simple shapes (i.e., circles and lines) into discontinuous patterns. Hu­ mans are often graphically represented with one large circle for a head, dots and lines for a face and some lines for legs. When 6- year-olds make the transition to the con­crete operational stage, they tend to draw all features intellectually related to an ob­ject, often taking in several visual perspec­tives simultaneously. Two ears and eyes are included in a human profile. It is not until ages 8 through 12 that the child's mental representations begin to approach visual realism (Krampen, 1991). Most of the drawings in this measure are visually realistic. They are inconsistent with how most preoperational and concrete opera­tional children draw. The younger children may not be reminded of their mental con­cept of God in this measure's dispropor­tionately large number of realistic draw­ings. The large proportion of drawings associated with the formal operational stage in both versions may attest to a formal bias inherent in these realistic drawings. More­ over, since the subjects selected rather than created their own God concept, not only might their own undifferentiating tenden­cies be underestimated but their selection may reflect what the subject has been taught to recognize instead of what reflects their actual internal God concept.

No special skills or instructions are needed to present the drawings, one at a time, before each subject, instruct the subject to point to as many (or none) of those drawings that "most remind them of God" and then to count the number of times a drawing was selected in a prede­termined group. If the comparison of inter­est is to determine how well these pictures differentiate between stages, then an independent measure of cognitive development is required. To analyze the data, familiarity with performing a one-way within subject analysis of variance, Kruskal-Wallis, and a post hoc Newman Keuls test is needed.

The purpose of this measure, to develop a standardized set of drawings that would nonverbally "indicate developmental changes in perceptions of God," is clearly stated. Also stated is their rationale for devel­oping a nonverbal measure. Namely, since significant portions of religious activity are not verbal, measures that investigate such nonverbal religious expressions are needed. In addition, a nonverbal measure would be of use to researchers where language use is an issue, such as when working with young chil­dren, or persons who are speech impaired, or when working across cultures.

To develop the first version of 21 drawings (Bassett et al., 1990), pictures of God were created by 198 members of conservative Protestant Sunday school classes with ages ranging from 2 to 75. Then these pictures were analyzed for religious themes and divided into three age­ groups. On the basis on these religious themes, 35 new ink drawings were created. These 35 pictures were shown to six male. and six female Protestant 6-year-olds, 7 male and 3 female Protestant 3rd graders, and 28 male and 18 female Protestants be­ tween the ages of 12 and 21. Nineteen draw­ings were eliminated on the basis of selections. This left I drawing that was regularly preferred only by 6-year-olds, 8 drawings regularly preferred by only 3rd graders, and IO drawings regularly preferred only by adults. After adding IO new drawings that might appeal to younger children, these 35 drawings were shown to 31 4-6 year-olds, 22 8-10 year-olds, and 38 adults. Based on the preference of these subjects' first mea­ sures, 21 drawings were identified.

In the second version of this measure (Bassett et al., 1994), the 21 drawings from the first measure plus 33 drawings with new religious themes inspired by pictures of God as drawn by 17 Catholics, 23 Methodists and I Orthodox Jew made up a new pool of 54 drawings. These drawings were shown to groups of females from the three different cognitive stages as determined by cognitive tests. There were 33 preoperational, 35 con­ crete operational, and 36 formal operational subjects. Within each cognitive group, both Protestants (conservative and mainline) and Catholics were represented. Consequently, the conservative Protestant bias of the sam­ples used in the first study was absent in the second sample, while the size of the sam­ples of each cognitive group was adequate (30+). Based on the preference of these sub­ jects, the second measure's 15 drawings were identified, five from each cognitive group.

No specific procedures were used to assess reliability, but three pictures used in the 1990 study were used again in the 1994 version. Among those, two pic­ tures-one of a bearded man and another of a cross, flames, and a dove-were preferred by subjects within the same stage as before, the preoperational and formal operational stages, respectively. The third drawing used in both studies, Jesus with children, was se­lected by the largest percentage among con­crete operational thinkers in the first study but failed to be preferred by any group in the second study.

The authors' procedure of assigning con­secutive numbers to the age-groups and then using these numbers as the data for ananaly­ sis of variance is not a justifiable test, as the authors acknowledge, and so does not support the idea that these drawings differentiate among age-groups. Their application of a sec­ond less powerful test, the distribution free Kruskal-Wallis, does support the idea that there is an overall difference in the frequency with which certain drawings were selected by a particular group. However, as an examina­tion of the residuals of the chi-square analysis would have demonstrated (Lehman, 1995, p. 298), this overall difference between groups primarily reflects the formal age-group's ac­ceptance or rejection of drawings, not the equal identifications with drawings across all groups. Even when the selection of drawings was influenced by subjects identified by a standard test for cognitive ability, most of the pictures that differentiated among cognitive groups differentiated the formal operational subjects. No drawings differentiated the con­crete operational stage from the other two stages in the second version. To further this instrument's effectiveness, other representa­tions of subformal processing, drawings or cutouts, need to be added.

But even with a more representative set of drawings, using the frequency with which a drawing is selected as a measure of cognitive differences does not necessarily mean that the religious content of the drawings reflects the content of the subject's cognitive perceptions. For it is equally pos­sible that formal-aged subjects rejected cer­tain drawings not because of the drawing's religious theme but because that drawing looked like what a younger child would draw (formal-aged subjects rejected the geometrically shaped man wearing a crown). If preferences for religious themes are to be investigated, then the form of a graphic representation needs to be stan­dardized. Eventually, the relationship between the processes mediating the images and the processing mediating the words used to those images (Pavio, 1990) should be part of the discussion of religious perceptions.

Also, the meaningfulness of material de­ rived from new versions of this measure will depend on how well the many chal­lenges to Piaget's theory of cognitive devel­opment are addressed. The authors point out that other cognitive approaches might also be explored. Despite the limitations of the current measures, in the psychology of reli­ gion, where words are only part of entire re­ligious experiences, the development of nonverbal measures is needed.

Bassett, E. (1977). Production strategies in the child's drawing of the human figure: Towards an argument for a model of syncretic perception. In G. Butterworth (Ed)., The child's representation of the world. NY: Plenum Press.