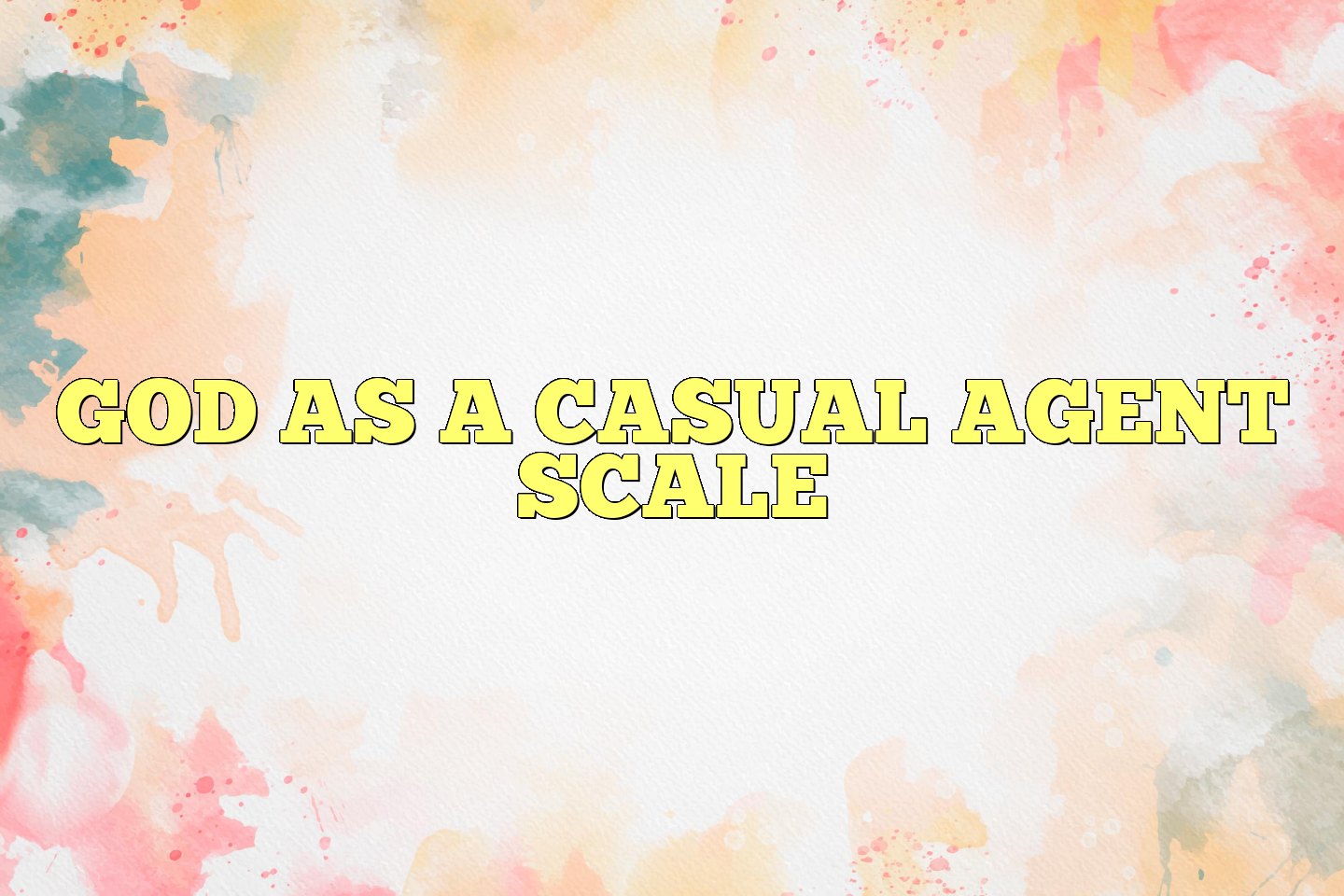 The God as a Casual Agent scale (GCA) point Likert scale, with high scores indicate- Scale is drawn from attribution theory whiching agreement. Seven of the items are states that one's explanations for external worded in a negative direction, and hence events and internal states have an important must be reverse scored. The result, after effect on human behavior. This scale at- summation, is a range of scores from 14 to tempts to measure one's general predisposi- 70, indicating the extent to which the retion to attribute events to God and divine inspondent is predisposed to attribute events tarnation rather than naturalistic causes. in a supernatural manner.

The authors argue that this scale may be a reasonable alternative for measuring religiosity. Instead of measuring religious be­havior, or belief, this scale attempts to mea­ sure the extent to which one believes that God is involved in a supernatural way with the human experience. Although this belief in the supernatural intervention of God as a causal agent is only one component of reli­giosity, it is a very important component and thus may be an excellent way to study religious behavior.

An original pool of 30 items was developed to assess one's belief in the effectiveness of prayer, the reality of mira­cles, and the experience of having received divine guidance. This pool was shortened to 14 items after pilot testing, based on item­ whole correlations.

Of the 14 items, 8 specifically concern the respondent's beliefs about God's divine intervention. The other 6 items ask the re­spondent to consider and react to other peo­ple's beliefs and experiences. The reasoning behind the inclusion of this latter type of item, presumably, is that they are worded so as to indirectly assess the respondent's be­liefs in light of their assessment of other people. The distinctions between these two types of items have led to criticism by Degelman and Lynn (1995). They argue that it is difficult to know what is being mea­sured because of the confused factor struc­ture. Item 7 seems to be a particular prob­lem because it asks only a factual question about what other people believe.

The scale is a short paper-and-pencil instrument. Half of the items are worded in the positive direc­tion, and half, in the negative direction. Item 4 may seem to be double barreled to some respondents, who may be confused as to whether they should base their answer on the statement about God's creating the world by his commands or on the particular number of days involved. (Should I disagree because it was done in six days rather than seven? or Should I disagree because I am not sure they were 24 hour days?)

Subjects were 128 college upper class students at a midwestern church-related college. (The homogeneity of this group would tend to deflate estimates of the reliability and validity of this instru­ment.) The overall mean was 52.1, the me­dian was 52.7, the standard deviation was 6.8, and the range was 20 to 66.

Reliability: The authors obtained a coeffi­cient alpha of .74. For 13 of the items, the item-whole correlations were between .46 and .62. The one weak item, number 7 (dis­ cussed above), had an item-whole correla­tion of only .09. This suggests that the dele­tion of this item would increase the coefficient alpha considerably. With the ex­ception of this item, the reliability numbers are strong.

The authors developed scenarios describing hypothetical situations in which the actors received a plausible but unexpect­edly favorable outcome. Subjects were asked to indicate, on a 9-point scale, the ex­ tent to which they believed these events were caused by natural or supernatural forces. These ratings were compared to the scores on the GCA scale. The analysis of variance design demonstrated that subjects who scored high on the GCA scale attrib­uted significantly more causality to super­ natural intervention than did those who scored low on the GCA. Unfortunately, the authors did not report the correlation be­ tween GCA scores and the rating of super­ natural intervention. They did, however, provide enough information to enable a cal­culation of the correlation between the GCA and the categorization of supernatural inter­vention into high and low groups. This point biserial r = .37. The Pearson r using the data in its original form might be somewhat higher.

Research by Jackson and Coursey (1988) provides some additional evidence. They found that GCA scores were correlated with internality (r = .26) using Rotter's (1966) Internal vs. External Control scale. This is consistent with the discussion by Parga­ment, Sullivan, Tyler, and Steele (1982) that God control, though external in nature, may operate in a manner more similar to an in­ ternal LOC approach. Jackson and Coursey (1988) also found a correlation of .32 with Hoge's (1972) Intrinsic Religious Motiva­tion Scale.

God as a Causal Agent Scale

Degelman, D., & Lynn, D. (1995). The development and preliminary validation of the Belief in Di­ vine Intervention Scale. Journal of Psychology and Theology, 23, 37-44.

Jackson, L. E., & Coursey, R. D. (1988). The re­lationship of God control and internal locus of con­trol to intrinsic religious motivation, coping, and purpose in life. Journal for the Scientific Study of Religion, 27, 399-410.

Rotter, J. B. (1966). Generalized expectancies for internal versus external control of reinforce­ment. Psychological Monographs, 80, Whole No. 609.