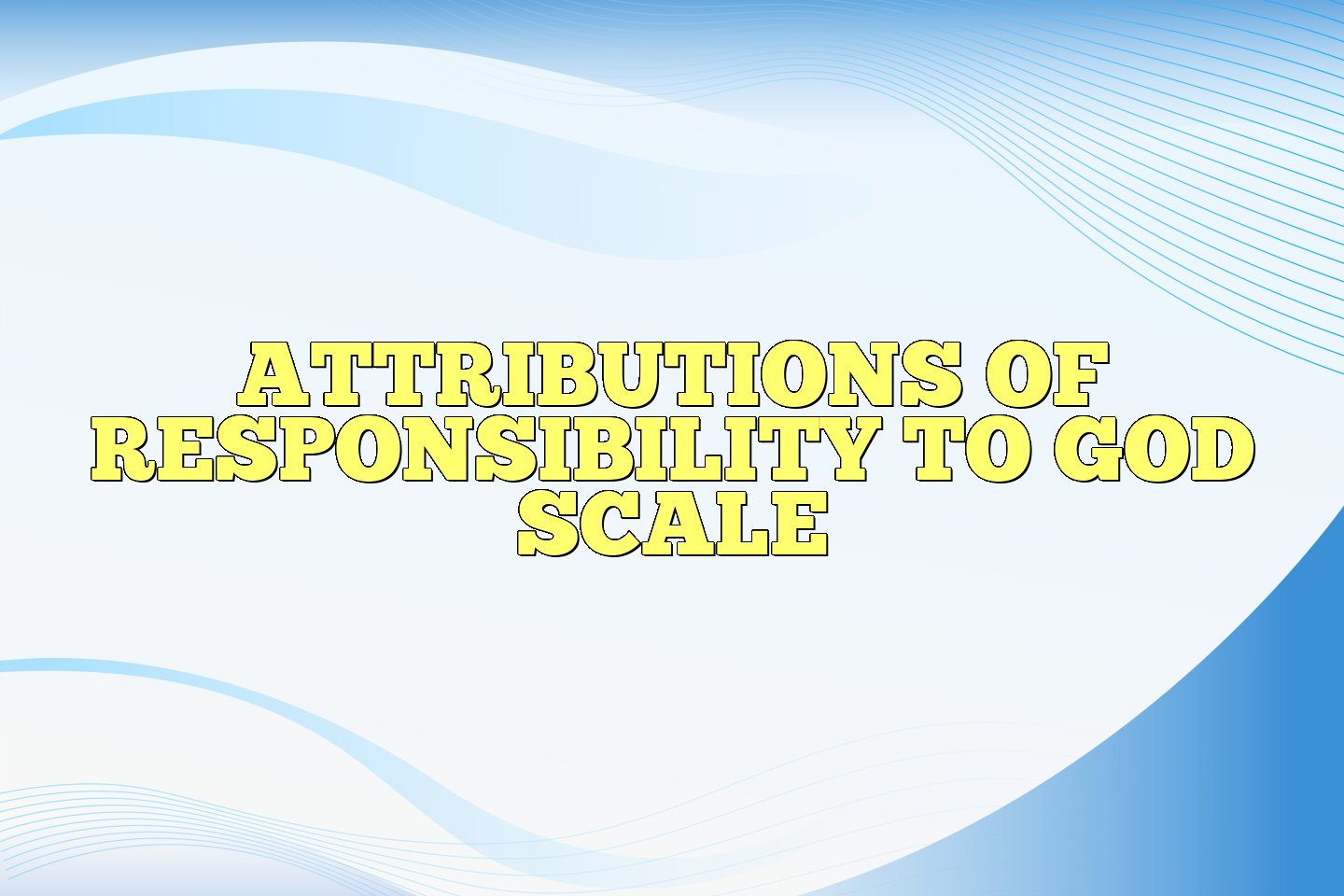 ATTRIBUTIONS OF RESPONSIBILITY TO GOD SCALE assesses the ex­tent to which individuals attribute certain life event outcomes to God. It does so by presenting four vignettes or stories that are varied along two dimensions: outcome probability (high vs. low) and outcome ex­tremity (extreme vs. mild). Then it asks re­spondents to evaluate the extent to which personal responsibility, luck, personal ef­ forts, or divine intervention are involved in determining the outcome of each story.

General attribution theory has been pro­ posed as a useful theoretical perspective for an understanding of religious experience. This is because it provides a cohesive and well-developed model for understanding the major dimensions and causes of one's beliefs and interpretations about life experi­ences and events (Glock & Piazza, 1981; Proudfoot & Shaver, 1975). In testing this model for the evaluation of religious attri­butions, Lowe and Medway (1976) de­ scribed some of the important situational features that would make it more likely for an individual to attribute an experience to God. In extending these findings, Gorsuch and Smith (1983) developed their instru­ment to evaluate how such features might interact with the religious traits of the individual in determining his or her "attri­bution to God" tendency for a given life sit­uation.

In the Attributions of Respon­sibility to God measure, all four vignettes provide events with positive outcomes. However, the outcomes can be varied along two dimensions: level of outcome probabil­ity (likely vs. unlikely) and outcome ex­tremity (extremely good vs. mildly good). The vignettes are also constructed so that causes for the events described are ambigu­ous. The vignettes involve experiences and feelings with which most respondents can readily identify and empathize.

After reading each vignette, respondents are asked a series of questions that evaluate the likelihood of a given outcome on a Lik­ert scale of O ("highly likely") to 11 ("highly unlikely"). Individuals are also asked to indicate whether they might find themselves in a similar situation. The re­sponse outcomes are counterbalanced in terms of likelihood of the outcome and the severity of the outcome.

Practical Considerations: The test is self­ administered and is relatively easy to com­plete. Although the required reading level has not been formally established, original data collected by Gorsuch and Smith were from college students. No other special instructions or administrator skills are men­tioned.

Norms/Standardization: The original sam­ple on which the instrument findings are based consisted of 164 undergraduate stu­ dents taking social science, nursing, and re­ligion courses at a small evangelical Christ­ian college. Prior to being administered the four vignettes, subjects were presented with portions of the Religious Attitude Inventory (Broen, 1957), which focuses on Christian fundamentalism of belief and one's "near­ ness of God" (see review of Broen's instru­ment in this volume; also see the review of Gorsuch and Smith's Nearness to God Scale and Fundamentalism Scale).

Reliability coefficients are not available from Gorsuch and Smith (1983).

This instrument has reasonable construct validity in that individuals higher on the "fundamentalist" and on the "near­ ness to God" dimensions of religiosity at­ tributed more responsibility to God for ex­treme life event outcomes. Other studies using different measures of religiosity have noted similar findings (Ritzema, 1979; see review in this volume). Other assessments of validity with this measure have not been found.

Note: Due to space constraints, experimental manipulations are included without repetition of other elements of the vignettes. The parentheses, underlining's, and labels (A, B, C, and D) do not appear in the original experimental booklet.

Outcome: After a number of sessions with the counselor, M. (C: was still a little depressed but was feeling somewhat better than at the beginning of counseling/ D: felt extremely better and felt rio more need for further counseling). M. said, "I feel like a changed person. I feel better than I have in years."

Outcome: Three months after moving to the new community, J. was (C: somewhat content with/ D: extremely happy and even excited about) the way things were going.

Outcome: (C: C. saw the offer of the ride as a friendly act and expressed appreciation to B.I D: After their trip, a deep and lasting friendship developed. C. later told B. how much their relationship meant to C. It was obvious that C'.s life had change in a positive way.)