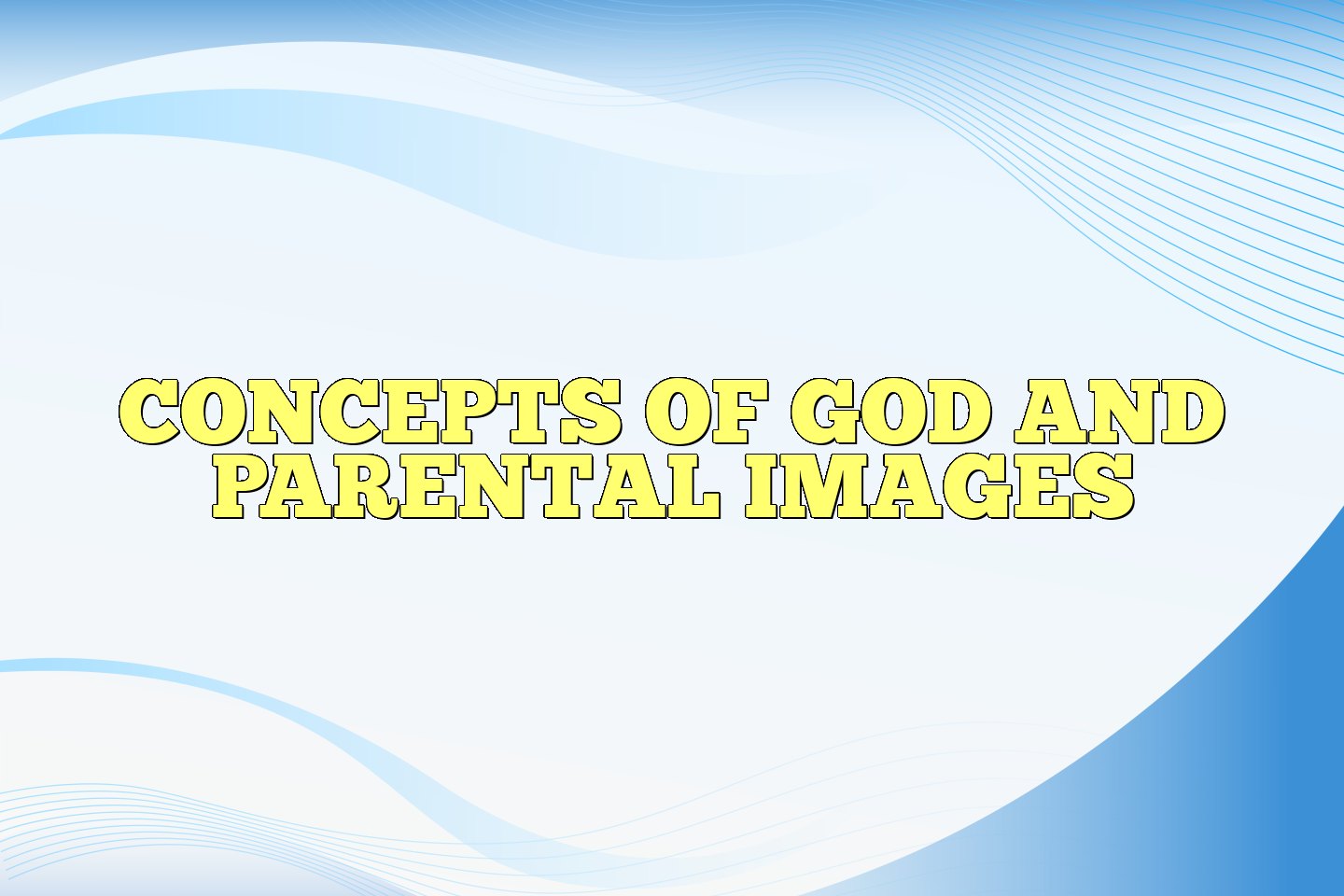 The Concepts of God and Parental Images Scale, developed at the Catholic University of Louvain in Belgium, is de­ signed to measure the relationship between individuals' symbolic images of Mother, Fa­ther, and God with respect to maternal and paternal characteristics.

This scale has been referred to as the God-Parent-Score or Score-Dieu­ Parent (Tamayo & Desjardins, 1976), and as the Semantic Differential Parental Scale (SDPS; Vannesse & De Neuter, 1981). Orig­inally constructed in Dutch, it has been translated into French, English, Spanish, and Italian. Like earlier research on God and parental images (e.g., Nelson & Jones, 1957; Strunk, 1959), it is theoretically grounded in psychoanalytic concepts and methodologically grounded in the Semantic Differential technique (Osgood, Suci, & Tannenbaum, 1957).

The Vergote et al. (1969) approach dif­fers importantly from previous work in that subjects are asked to rate, on both maternal and paternal qualities, their ideals of each parent at a "symbolic" level, not in terms of actual experience. Vergote et al. (1969) showed, as expected, that the God image in­ volves a mixture of both maternal and paternal qualities, although the particular pat­ terns observed varied across a variety of samples.

The scale itself contains 36 items, 18 of which are descriptions of maternal qualities and 18 of which are considered paternal qualities. Mother, Father, and God images are each rated on all 36 qualities, which are distributed randomly within the measure. Each item consists of a word or phrase to be rated in a Likert-style format denoting the degree to which the quality described in the item applies to the target image. All items are worded in a positive direction (i.e., higher ratings mean more maternal or more paternal, respectively).

In contrast to the more usual psychomet­ric approach in contemporary work, items are not summed to create total or subscale scores. Instead, specialized statistical tech­niques are used to assess the distance or similarity between entire profiles of scores (cf. Osgood et al., 1957).

A revised 72-item version of the measure (SDPS II) is presented in Pasquali (1981), but to our knowledge no research has been conducted with this version other than that reported by Pasquali.

The scale is easy to administer. Because no items are reverse scored and because items are not summed to create aggregate scores, no further scoring is required. However, statistical analysis of the similarities/distances between images requires knowledge of specialized statistics. To use the scale as intended, care must be taken to instruct respondents to evaluate the Mother and Father images at a "symbolic" rather than a "memory image" level, that is, "not as they really are, but as they should be" (Vergote et al., 1969, p. 80). None of the sources reviewed provided more specific detail about the appropriate wording for these instructions; however, Vergote and Tamayo (1981) provide a detailed explana­tion of the intended theoretical distinction.

Vergote et al. (1969) derived their original items from "more than a hundred psychological, philo­sophical, religious, and literary works" (Vergote et al., 1969, p. 80), which are listed in an appendix to Vergote and Tamayo (1981). From these sources they compiled a list of 226 maternal and paternal qualities, which were then rated by graduate students from various fields to determine those items that most clearly differentiated maternal from paternal images. The scale was further developed through a series of interview and paper-and-pencil studies, employing high school students, college students, and col­lege faculty, to determine the selection and final wording of the 36 items and to ensure equivalence of the various translations. (See Vannesse & de Neuter, 1981, and Vergote et al., 1969, for reviews of scale development procedures.) Vergote et al. (1969) reported results on an American sample of 180 Roman Catholic students, half male and half female, includ­ing equal numbers of high school students, college liberal arts majors, and college sci­ence majors. Mean ratings on each of the 36 images were presented with respect to Mother, Father, and God, as well as various measures designed to assess the degree of correspondence among these images. Fur­ther breakdowns by sex, age, and field of study were also presented, and informal comparisons were made between these results and those from previous research with two Belgian samples.

Because items are not summed to create a composite index, internal consis­tency reliability (e.g., Cronbach's alpha) is not applicable. No test-retest data were re­ ported in the sources reviewed.

In a mixed sample of 62 American high school and college students (Vergote et al., 1969), a sample of 200 French-speaking Canadian students (Tamayo & Dugas, 1977), and a larger sample of 300 American university students (Vannesse & De Neuter, 1981), all 36 items were shown to discrimi­nate significantly between the Mother and Father figures. In the latter study it was also shown that different results are obtained when the "symbolic image" instructions are given as compared to the "memory image" instructions.

Please rate the degree to which each of the following characteristics are associated with your mother/father/God using the following scale.

This scale seems to have been used by few if any researchers outside of the Belgian research group that developed it. A book-length collection of re­ search reports translated into English is available (Vergote & Tamayo, 1981), which includes studies employing the SDPS in a variety of cross-cultural comparisons (e.g., samples from Belgium, Italy, Zaire, Colom­bia, Indonesia, the Philippines, and the United States) and in various special populations (the elderly, juvenile delinquents, and schizophrenics). Other English-language publications reporting research utiliz­ing the scale include:

Vergote, A., & Tamayo, A. (Eds.) (1981). The parental figures and the representation of God: A psychological and cross-cultural study. The Hague: Mouton.