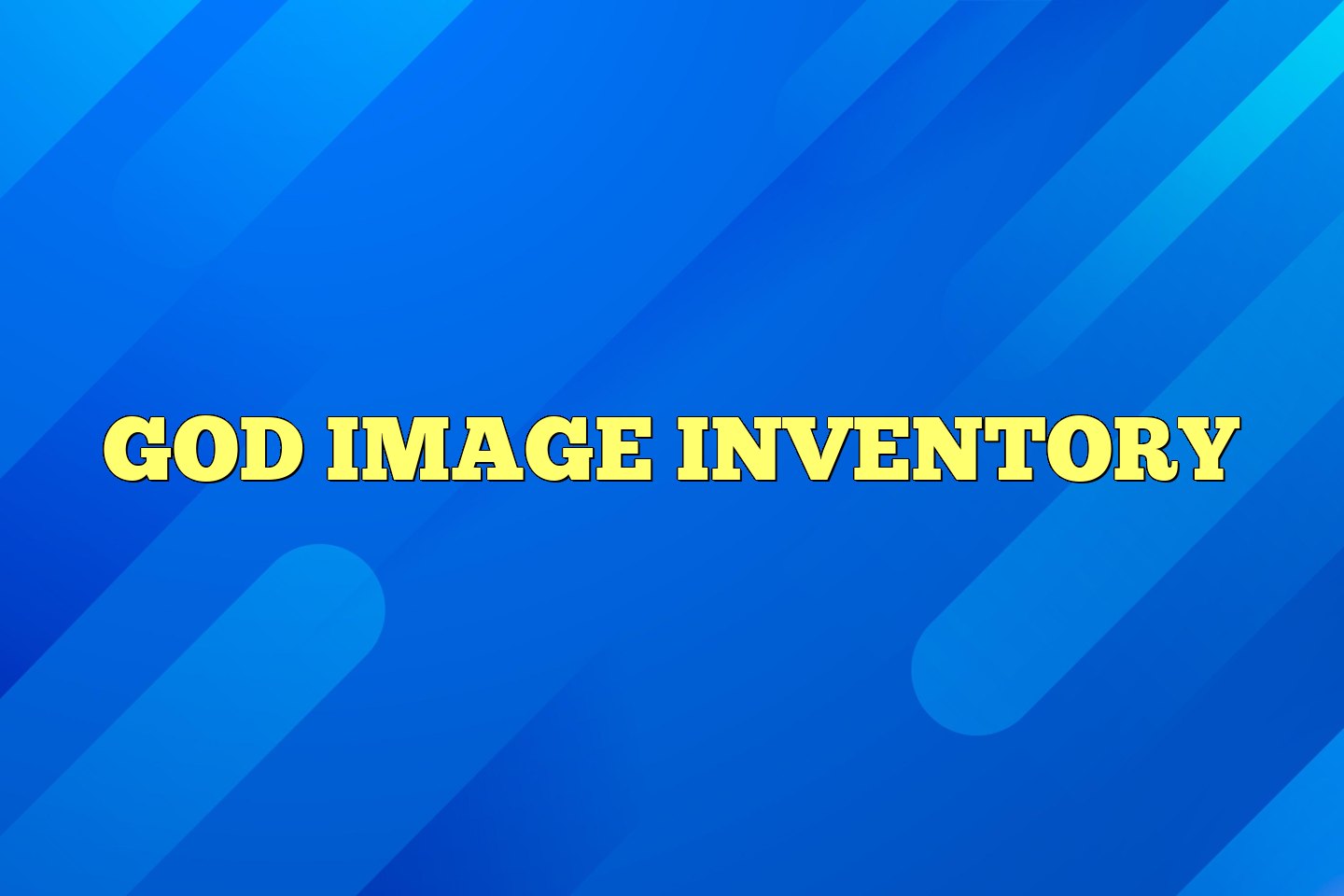 The God Image Inventory (Gil) contains six subscales measuring different aspects of God image: Influence, Provi­dence, Presence, Challenge, Acceptance, and Benevolence. In addition, the God Image Scales contain shortened versions of each of the six subscales for use in research.

The Gil contains a total of 156 items. Each of the six main scales consists of 22 items, while the two control scales (Faith and Salience) each contain 12 items. The instrument is scored on a four-point Likert scale with 1 indicating strong agreement and 4 indicating strong disagreement with each statement. Many negatively worded items must be reverse scored. Each subscale should be scored separately by simply sum­ming the items contained in it. Scores range from 22 to 88 for the six main subscales, and from 12 to 48 for the two control scales. A higher score represents a greater degree of the particular trait identified by the scale name.

Lawrence (1991) distinguishes between a person's God concept and his or her God image. The God concept is an intellectual­ized definition of God that is largely an arti­ fact of cultural and religious education. God image, by contrast, is one's intuitive sense of God-what Lawrence describes as "a set of remembered and interpreted associations and experiences" (Lawrence, 1991, p. 134). Thus instead of focusing on beliefs about God, it focuses on a more affectively laden experience of God.

In light of this theory, Lawrence created the God Image Inventory to assess individu­als' felt sense of who God is for them. Lawrence (1991) constructed sixerinipal scales (Influence, Providence, Presence, ( Challenge, Acceptance, and Benevolence) and two control scales (Faith and Salience). Based on Rizzuto's (1979) suggestion that the God image is created, altered, and used primarily for the purpose of preserving a tolerable tension between affectively laden experiences of self and others, Lawrence concluded that God image and self image are highly related to one another, and he sought to measure the relationship between the two. Lawrence used three basic themes for the self image as a framework for the six subscales: feelings of control, belonging, and fundamental goodness.

The theme of control was divided into two basic questions, one being more primi­tive and focused more on the self (How much can I control God?), the other being more focused on God (How much does God control me?). The first subdivision was la­beled Influence, and the second, Providence.

The theme of belonging was likewise di­ vided into two basic considerations, the first of which, drawn from the work of Winnicott (1953), suggests that "belonging" for the infant relates to the issue of presence and is experienced as the question "Is mother there for me?" Thus the first and most primitive belonging issue was labeled "Presence," ../

which is reflected by the question Is God there for me? The second aspect of belonging relates to the work of Kirkpatrick (1986), who, following Bowby (1969), out­ lined two roles for attachment figures. The first, which corresponds well to the issue of presence, is labeled "Safe Haven" and refers to a person to whom the child may retreat and find present. The second consideration, called "Secure Base," relates to the same person's availability as he or she provides empowerment for the child to move out and explore the world. Thus the second belonging issue was labeled "Challenge," which · can be represented by the question "Does God want me to grow?"

The theme of Goodness was again di­ vided into two components. The first com­ ponent, with more primitive emphasis on self image, can be characterized by the question "Am I good enough for God to / love?" This dimension was labeled "Acceptance." The second component, more reflex­ive and oriented toward God image, can be,, summarized by the question "Is God the sort j of Being who would want to love me?" This dimension was labeled "Benevolence."

Since these six dimensions are hypothesized to be fundamental questions about God image, self image, and the relationship be­ tween the two throughout life, these are viewed as being relatively independent of developmental stages or theories. Lawrence (1991) points out that although this does not mean that these basic questions remain sta­ tic throughout life, they are nonetheless measurable throughout life.

In addition to these six main scales, Lawrence (1991) added two shorter control scales for the convenience of the interpreter. The first one, Faith, attempts to measure the degree to which the subject believes in God as an existing being. The second, Salience, purports to measure the degree to which people find their relationships with God im­portant to their personal lives.

The test is self­ administered and requires no special exam­iner skill to administer or score. The instruc­tions explain the meaning of each choice (i.e., strongly disagree, disagree, agree, strongly agree) and emphasize that there are no "right" or "wrong" answers. It is de­ signed for research as well as pastoral and clinical use.

Lawrence (1991) standardized the GIi on a national sample of 1,580 respondents. These standards were demonstrated to be adequate for the inter­pretation of scores of adult American Chris­ tians across sex, age, education, and marital status. The means for the eight subscales ranged from 36.1 (Salience) to 73.3 (Benev­ olence). Standard deviations ranged from 7.0 (Faith) to 12.5 (Presence).

In order to establish convergent and dis­ criminate validity, Lawrence (1991) corre­lated the GIi scales with seven other mea­ sures (Extrinsic, Intrinsic, Achievement, Self-Esteem, Altruism, Locus of Control, and God Control) with which GIi scales were predicted to relate in particular ways. The extrinsic scale, as predicted, was found to correlate negatively with all the GIi scales. However, not all the correlations were small, as predicted. Lawrence pre­dicted that overall intrinsic religiosity would correlate most highly with Salience, since it measures the relational importance of the God image to the subject. Lawrence further hypothesized that subjects with a greater sense of God's availability for them (Pres­ence) would report a more satisfactory rela­tionship with God, and thus would be more religious overall. Lawrence also predicted that intrinsicness would correlate second best with the Presence scale. As hypothe­sized, the Presence scale correlated the high­est with the Salience scale (.76) and second highest with the Presence scale (.69), thus supporting the validity of these two scales.

The Achievement Scale did not perform as Lawrence had hypothesized, namely, that it would correlate positively with the Challenge Scale. However, it related negatively with all the Gil scales and reached significance only with the Providence Scale. Since it did not correlate significantly with Challenge, it nei­ther confirmed nor falsified the validity of the Challenge Scale. Confirming Lawrence's hypothesis, the Self-Esteem Scale correlated positively with the GIi Acceptance Scale (.54). Although Lawrence expected the Altru­ism Scale to relate significantly better with the GIi Benevolence Scale than with the other GIi scales, and second best with the GIi Acceptance Scale, it actually failed to discriminate the two GIi scales, and demon­ strated a very narrow range of correlations with all the GIi scales (.22 to .26).

Lawrence hypothesized that Internalization of a psychometric instrument for research, pastoral and clinical use in measuring the image of God. Unpublished doctoral dissertation, The Catholic University of America, Washington D. C.

Please respond to each statement by circling the response that comes closest to describing your feelings:

Lawrence, R. T. (1991). The God Image Inven­tory: The development, validation, and standard­ization of a psychometric instrument for research, pastoral and clinical use in measuring the image of God. Unpublished doctoral dissertation, The Catholic University of America, Washington D. C.

Kirkpatrick, L. A. (1986). Developmental psy­chology and religion: Potential application of at­tachment theory for the psychology of religion. Paper presented at the annual meeting of the Soci­ ety for the Scientific Study of Religion, Washington D.C.

Rizzuto, A. (1979). The birth of the living God. Chicago: University of Chicago Press.