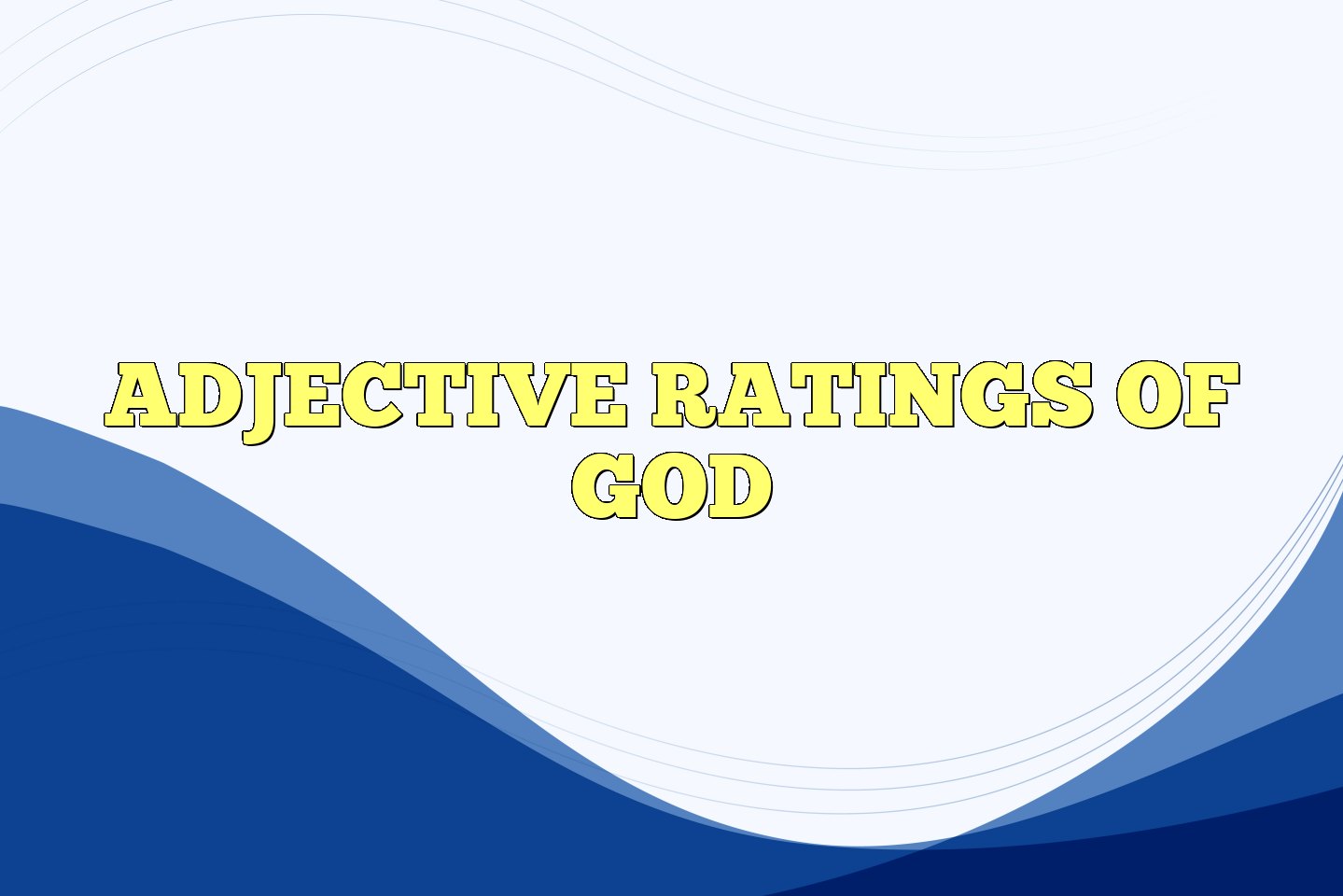 The purpose of the Adjective Ratings of God Scale is to push beyond the vague (but often asked) survey question, "Do you believe in God?" In particular, the scale measures specific concepts regarding the type of God (e.g., kindly, wrathful, etc.) in whom belief is placed.

Two primary theories were ex­plored as potential bases for these percep­tions. One (Spilka, Armatas, & Nussbaum, 1964) focused on the usefulness of anthro­pomorphic characterizations of God. Re­ searchers used 63 adjectives to derive five factors descriptive of a religious individ­ual's God perceptions (stern father, imper­sonal, kindly father, "omni-ness," and scales are easily extractable and are readily related to other constructs (e.g., intrinsic-ex­trinsic, etc.).

Responses were initially obtained from 585 undergraduate students (234 females, 351 males). The sample was moderately religious (29% at­ tended services at least once per week) and primarily Christian Protestant (77%).

three factors associated with the linguistic properties of adjectives (evaluation: good vs. bad; potency: strong vs. weak; and activ­ity: active vs. passive).

To these 91 words, Gorsuch added nine marker items (eight random variables and one denoting sex); the nine additional items are not a part of the final scale. Words were rated: (a) "the word does not describe 'God,"' (b) "the word describes 'God,"' and Ultimately, eight first-order, two second­ order, and one third-order potentially corre­lated factors were determined. From among the general items composing each dimen­sion, Gorsuch isolated items on 5 of the l l factors to construct reliable subscales. These five subscales compose the overall scale and consist of the following; Tradi­tional Christian

Completion time for this paper-and-pencil instrument is ap­ proximately 5-10 minutes. The five final

Eighty-five males randomly selected from the original sample and set aside as a cross­ validation sample displayed similar results.

These two studies with only moderate sample sizes did not attempt confirmatory factoring of the scales, nor did they treat "traditional Christian" as a higher order fac­ tor. Although the basic scales extracted appear solid, a full replication has not been conducted.

1 A lack of variance on responses to items in this scale severely attentuated reliability estimates.

2 The scale "kindliness" was not one of Gorsuch 's sug­gested scales, although it was present as a first order factor; it was used for heuristic purposes, even as "irrelevancy" was not used since that scale did not pertain to the research in question.

Overall, support was lacking for a purely semantic differential explanation of God concepts. The five factor finding of Spilka et al. (1964) was, however, essen­tially replicated, albeit in complex relation to Osgood et al. (1957). This replication suggests that the factors in question appear consistently. What remains is to compare di­rectly the Gorsuch scales with others that purport to measure similar constructs.

The following is a survey to determine what descriptive words apply to God. Please print a "l," "2," or "3" on the line before each word according to how well you think it describes what the term "God" means to you. There are no right or wrong answers; we are interested in what this concept means to each person. Use the following scale:

Gorsuch, R. L. (1968). The conceptualization of God as seen in adjective ratings. Journal for the Scientific Study of Religion, 7, 56-64.

Gorsuch, R. L. (1968). The conceptualization of God as seen in adjectiveratings. Journal for the Sci­entific Study of Religion, 7, 56-64.

Sundin, H., Ladd, K. L., & Spilka, B. (1995). The relation between God images and perceptions of God's control. Paper presented at the annual con­vention of the Rocky Mountain Psychological As­ sociation, Boulder, CO.