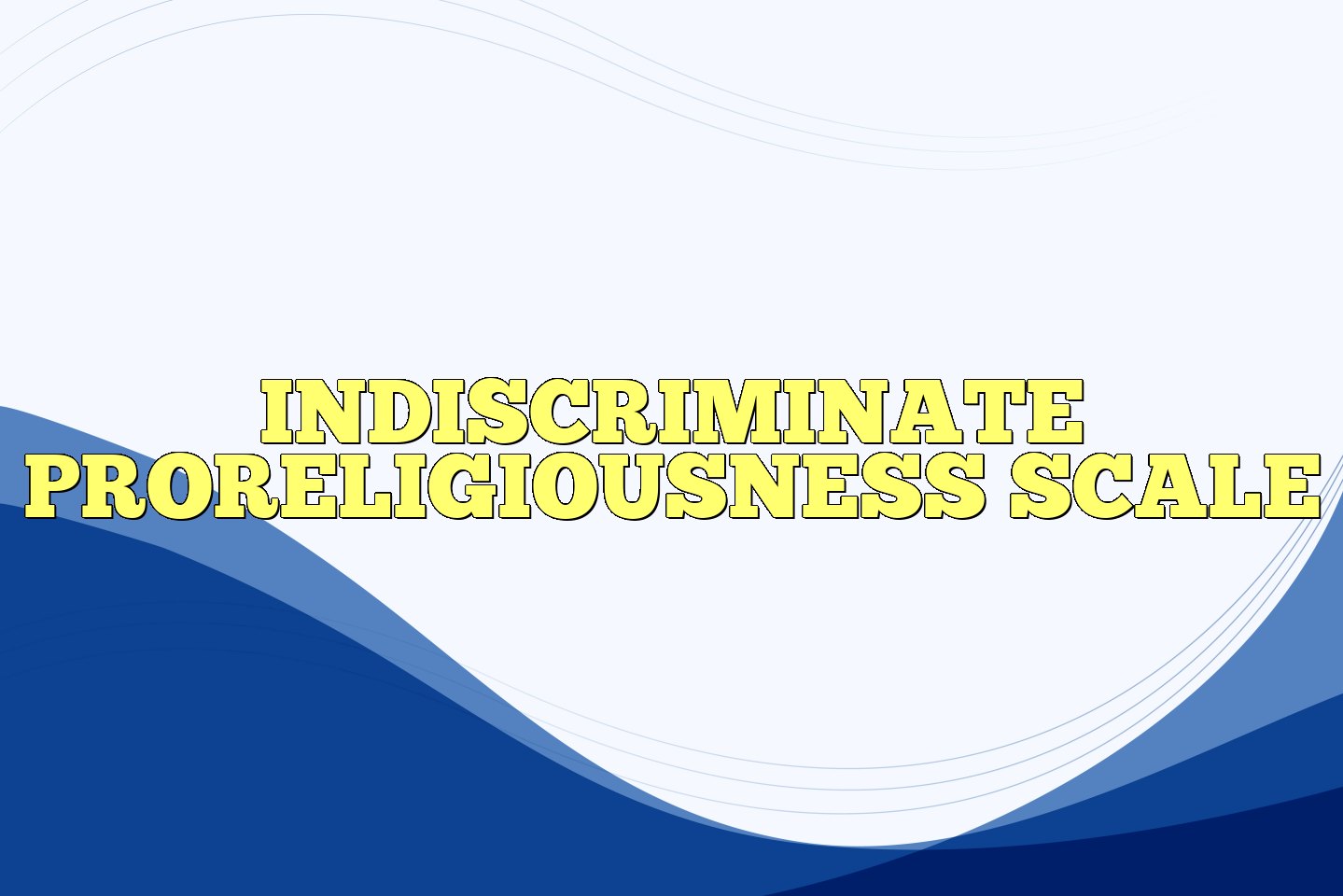 The Indiscriminate Proreligious­ness Scale (IPRO) measures the tendency to be both intrinsically and extrinsically re­ligious on personal and congregational lev­els. Pargament developed this scale after examining the way Allport criticized the logic of the indiscriminately proreligious individual who scored high on both the ex­trinsic and intrinsic subscales of the Reli­gious Orientation Scale (Allport & Ross, 1967). Pargament suggests that intrinsic and extrinsic orientations are not necessarily logically inconsistent. Individuals who score high on both scales may, according to Pargament, both "live" and "use" their reli­gion.

Pargament and his colleagues opera­tionally define indiscriminate proreligious­ness as a tendency to respond positively to religious material regardless of its plausibil­ity. For example, a person who consistently responds positively to such statements as "Members always know about all church activities" and "I always live by my reli­gious beliefs" would be considered indis­criminately proreligious by this scale.

Both the congregational and personal subscales use a true-false format to force the respondent to choose between an indiscrim­ inate proreligious position and a more dis­ criminating position. Each item clearly al­ lows for a choice of a proreligious position, and, in each case, this position is not plausi­ble. The PRO-C scale contains 16 items, 8 of which are reverse scored. The PRO-P scale has 12 items, with 5 reverse scored.

If a proreligious orientation is used as a categorical independent variable, it is rec­ommended that theoretical midpoints of the scales (8 for PRO-C, 6 for PRO-P) be used rather than median splits, thereby avoiding inconsistent classification across studies due to sampling differences.

One sample total­ing 261 subjects was selected from three Michigan churches: two Lutheran (total N = 155) and one Presbyterian (N = 106). Forty­ one percent of the sample was male and the median age was 43. A second sample was drawn from church-going student volunteers from a moderate-sized midwestem univer­sity. This sample of 305 subjects contained 27% males with a median age of 19 and consisted of 53% Roman Catholic, 43% Protestant, and 4% Other.

Validity: The content validity of the scale was determined by a factor analysis, using a promax rotation. All items have factor load­ings of at least .20 and, with the exception of two PRO-C items, do not load on the other factor. An agreement response set is largely eliminated by the presence of nega­tively worded items.

Construct validity was measured in a number of ways. First, PRO-C and PRO-P correlate only moderately with the Crowne­ Marlowe (1964) measure of social desirabil­ity (.52 with PRO-P and .29 with PRO-C in the church sample; .49 with PRO-P and .31 with PRO-C in the student sample). Second, PRO-P with PRO-C correlate only moder­ately with each other (.40 for the church sample and of .44 for the student sample), suggesting that the two subscales assess re­lated but distinct domains of indiscriminate proreligiousness. Third, the median correla­tions with measures of congregational cli­ mate and satisfaction across both church and student samples were higher with PRO­ C (.43) than with PRO-P (.22) and Crowne­ Marlowe (.14). Fourth, the median correla­tions with several religious variables (e.g., intrinsic, extrinsic, quest, God-control, or­thodoxy, church attendance, frequency of prayer, and religious salience) were higher with PRO-P (.30) than with PRO-C (.I 0) and Crowne-Marlowe (.09). The between­ sample (church and students) consistency in support of these hypotheses not only sug­gests high construct validity but also demonstrates evidence of generalizability. Fifth, a modest relationship was found be­ tween PRO-P and indiscriminate proreli­giousness as defined through the Allport and Ross 2X2 typology on the Intrinsic-Extrin­ sic Religious Orientation Scale.

Please answer "true" or "false" to each of the following items.

(R) indicates that the item is reverse scored.