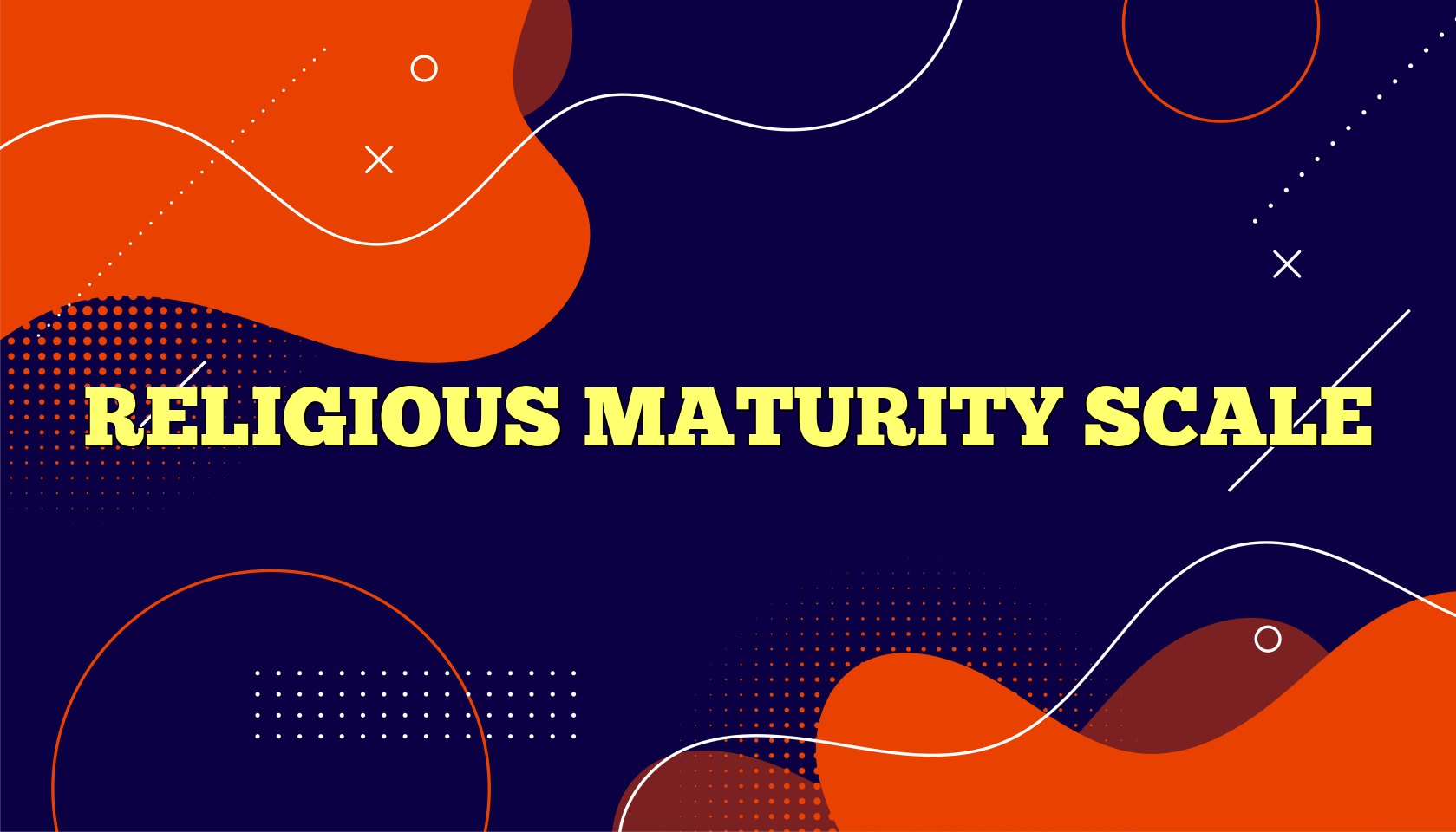 The Religious Maturity Scale (RMS) was developed in response to recent controversies in the psychology of religion. Widely used measures of intrinsic and com­ mitted religiousness originate in efforts to operationalize Allport's (1950) classic de­ scription of religious maturity. According to Batson and his colleagues (e.g., Batson & Ventis, 1982), these measures have failed to achieve their purpose. Allport emphasized open-mindedness as one aspect of religious maturity, whereas these instruments puta­tively record the orthodox fanaticism of a "true believer." Batson's Quest Scale seeks to redress this presumed problem by mea­suring a tolerant existential struggle for meaning. High scores on the Quest Scale are designed to reveal a more cognitively flexible religious orientation in which faith is wedded to doubt.

Like others before them, Dudley and Cruise (1990) criticize this conceptualization of Quest. They suggest that doubt is incom­patible with the sincere commitment that Allport identified as another aspect of ma­ture religion. To their way of thinking, a per­ son who scores high on Quest "would be re­ quired to strongly agree with one set of items stressing commitment and the impor­tance of faith while at the same time strongly agreeing with another set of items stressing religious doubts and uncertainties. To us this seems rather illogical, not to mention un­ comfortable" (Dudley & Cruise, p. 100).

In their Religious Maturity Scale, Dudley and Cruise present what they hope to be a more defensible index of the personal reli­gious search for meaning. They define reli­gious maturity within a psychological rather than a theological framework. The focus, in other words, is on the process of being reli­gious rather than on the content of particular theological beliefs. High scores theoreti­cally reflect a creative tension between sin­ cere commitment and a tentative open­ mindedness, rather than doubt. As described by this scale, the religiously mature individ­ual believes, "I want to be ready to progress in my understanding when a new piece of the 'truth' becomes clear to me. In the meantime I will live by the light I have" (Dudley & Cruise, p. 101).

As a process rather than a con-; tent measure of religious commitment, this scale may be appropriate for use with all types of religious subjects, including those outside of the Judeo-Christian tradition. , Items were written after a careful analysis of Allport's (1950) claim that a mature reli­gion should be "(I) well differentiated; (2) dynamic in character in spite of its deriva­tive nature; (3) productive of a consistent morality; (4) comprehensive; (5) integral; and (6) fundamentally heuristic" (Allport as quoted by Dudley and Cruise, p. 98). Twenty-six statements of religious maturity were combined with 28 other Intrinsic, Ex­trinsic, and Quest items to form a Personal Religion Inventory.

This inventory was administered to a sample of 491 mostly university students. Each statement was followed by a 5-point Likert-style agreement scale. A factor analysis of the entire inventory uncovered three orthogonal dimensions, with the third reflecting religious maturity. The 11 statements loading on this factor were combined into the Religious Maturity Scale (see ap­pendix). Three negatively scored items articulated religious immaturity, with eight others expressing maturity. Total scores were computed by summing across all 11 items, , resulting in a possible range of 11 to 55. /

The Religious Maturity Scale appears to be a straightfor­ward self-report measure. All items display an obvious face validity, and completion of the scale should be possible within ten and perhaps five minutes. Dudley and Cruise did not determine the reading level of their instrument, but comprehension of at least some items might demand a fairly high level of education. This possibility perhaps is il­ lustrated in the following item: "I have found many religious questions to be diffi­cult and complex so I am hesitant to be dog­matic or final in my assertions."

Most of the 491 subjects used by Dudley and Cruise were Catholic or Seventh-day Adventist university students. Seventy older adolescents and a smaller group of adults attending various religious functions were included as well. The Religious Maturity mean and standard deviation were not reported for this sample.

coefficient alpha of .55. They argued that this internal reliability was not higher be­ cause the construct is a difficult one to oper­ ationalize. It is not easy, they claimed, to combine "the intelligent and informed com­ mitment to a belief system, with the open­ minded tentativeness of the searcher of truth" (Dudley & Cruise, p. 103). The au­ thors did note, however, that a more accept­ able coefficient alpha of .68 was uncovered in another investigation examining a na­ tional sample of over 400 participants.

The title of this article explicitly states that the goal of Dudley and Cruise was to present "a proposed scale." The au­thors consequently supplied little supportive validity evidence. They did find, however, that their instrument correlated as expected with greater Quest (.37), but not with the In­trinsic (.10) or Extrinsic (.02) religious ori­entations.

Here are some statements that show how some people feel about religion. Please indicate how much you agree or disagree with each by circling a number on a 5-point scale where 1 = strongly disagree and 5 = strongly agree.