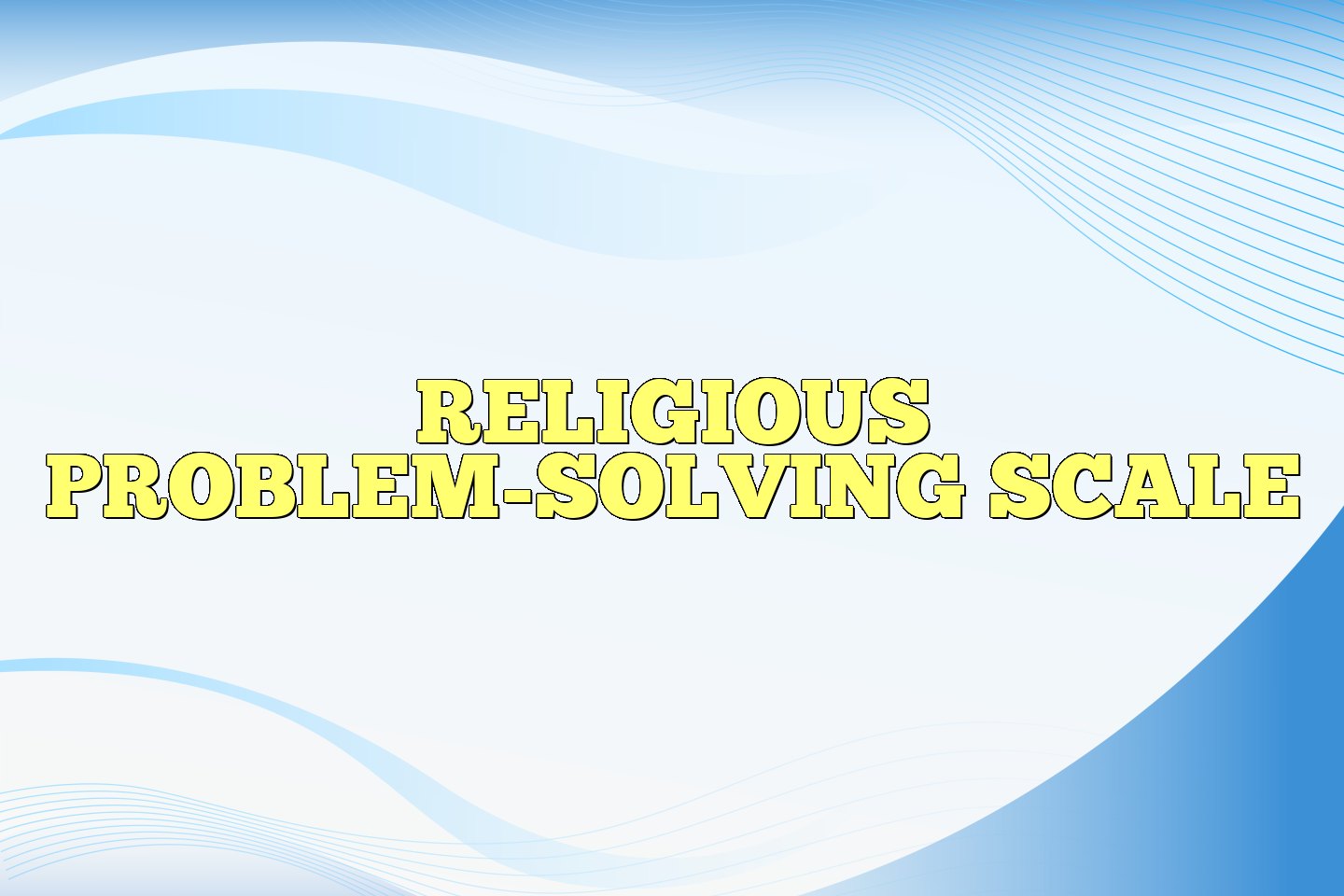 The Religious Problem-Solving Scale is actually comprised of three separate subscales. They were designed to distinguish different degrees of responsibility assigned to self or God in solving problems, as well as the level of initiative taken in problem solv­ing. The Self-Directing, Collaborative, and Deferring subscales were based on the hy­pothesis that responsibility and initiative in problem solving is associated with greater mental health. The Self-Directing scale was based on Fromm's (1960) notion of a human­istic religion which places the responsibility for problem solving on people rather than God. The Collaborative scale was based on a notion of persons acting as co-partners with God, working together to solve life's prob­lems (Abelson, 1969; Hart, 1984). The De­ferring scale was derived from Fromm's con­cept of an authoritarian religion which stresses the passive submission of persons to an omnipotent God when faced with prob­lems.

The RPS was also based conceptually on the literature which has outlined several phases to the problem-solving process: defi­nition of the problem; generation of solu­tions; selection and implementation of the solution; and re-definition of the problem once it has been solved. Each of these phases was used in drafting items for the RPS.

This paper-and­ pencil measure takes approximately twenty minutes to complete in its long form (half as long in the short form). The instructions ask respondents to state how often each of the statements apply to them. No special exam­iner skills are needed to score or interpret this self-administered measure. The items in the scale are easy to comprehend.

Normative data were collected from a sample of 197 mem­bers drawn from one Presbyterian church and one Missouri Synod Lutheran Church in the Midwest. The means and standard devi­ations obtained for each of the three scales were: Collaborative (mean = 36.02, standard deviation = 10.67); Self-Directing (mean= 29.70; standard deviation= 10.71); and Deferring (mean = 25.81; standard de­viation = 9.19). Members were sampled through a procedure designed to control the effects of the degree of involvement in one's church. The sample was 57% female, 69% married, and varied in educational back­ ground. The lack of racial diversity in the sample raises questions as to the generaliz­ability of the norms among a racially di­ verse population.

As the authors predicted, the three problem-solving styles were found to be differentially associated with measures of religiousness as well as psychosocial com­petence. As expected, the Deferring orienta­tion was associated with a religious style characterized by high religious involvement and reliance on external rules. The Collabo­rative style was linked to an internalized form of religiousness based on an intimate, interactive, and highly involved relationship with God. The Self-Directing style was not associated with traditional religious interest and practices, favoring instead a quest ori­entation to religion.

Also consistent with the authors' predic­tions, the Deferring style of problem solving was negatively associated with such aspects of competence as personal control, self-es-

teem, and tolerance of ambiguity. In con­trast, the Self-Directing style was positively associated with personal control and self-es­ teem. When the effects of the Deferring and Self-Directing styles were statistically re­ moved, the Collaborative style was also found to be positively associated with per­sonal control and self-esteem.

A factor analysis of the 36 items of the RPS resulted in a three-factor solution which conformed well to the three scales of the RPS. This three factor solution lends strong support to the hypothesis that people use either a Self-Directing, Collaborative, or Deferring problem-solving style in their re­lationship with God. This finding, along with the data linking the Deferring style with poor psychosocial competence, and the data linking the Self-Directing/Collabora­tive styles with higher psychosocial compe­tence, combine to support the validity of this measure.

Following are the items included in the Religious Problem-Solving Scale. Items from the three subscales (Collaborative, Self-Directive, and Deferring) were mixed together to form a single questionnaire. All items were scored on the same 5-point Likert continuum ranging from "never" to "always." The short form of this measure consists of the first 18 of the 36 items listed below.

Friedel, L. A., & Pargament, K. I. (1995). Reli­gion and coping with crises in the work environ­ment. Paper presented at the 103rd annual conven­tion of the American Psychological Association, New York, NY.

Hart, A. D. (1984). Coping with depression in the ministry and other helping professions. Waco: Word Books.