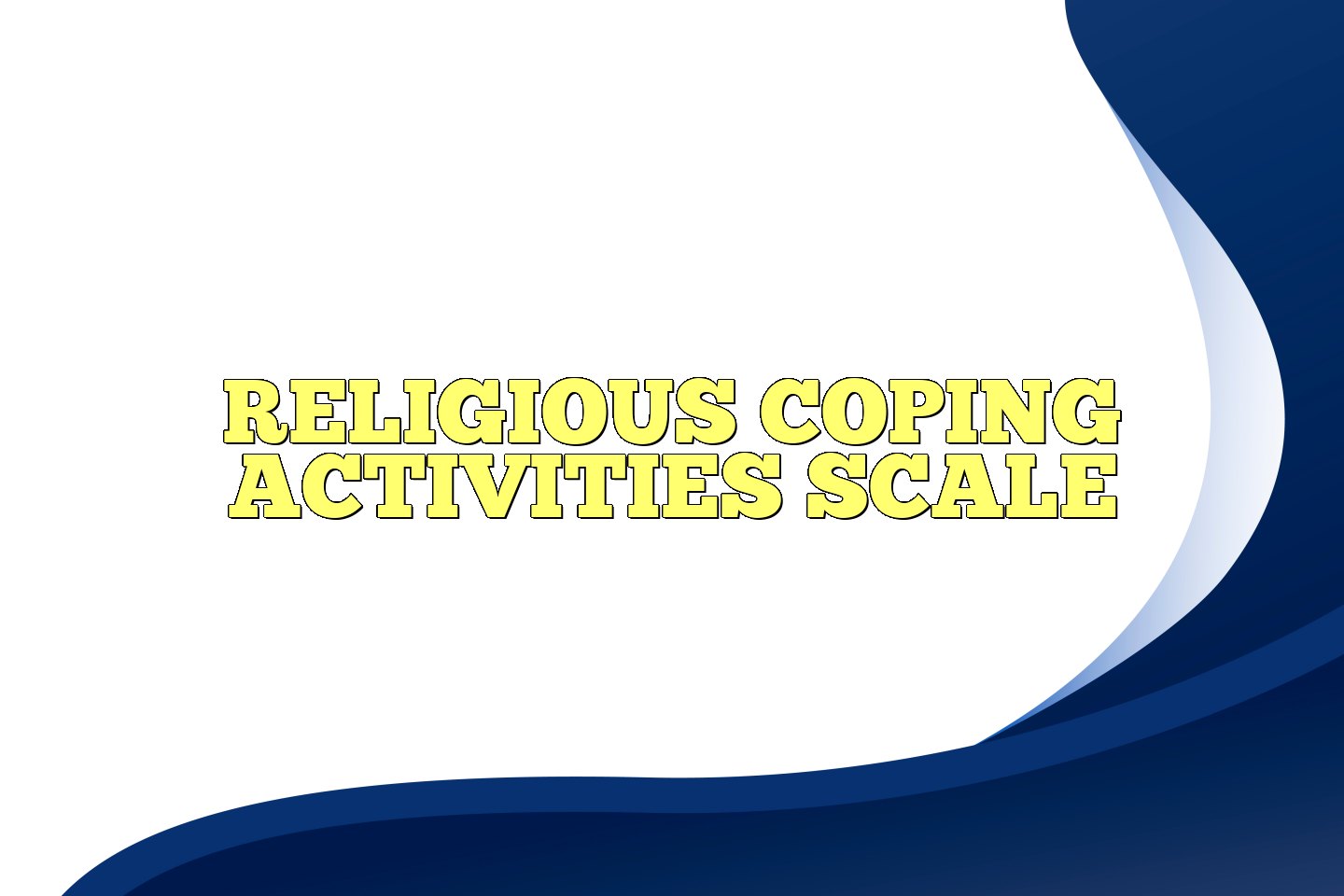 The Religious Coping Activities Scale measures the extent to which people tum to religion to cope with stressful life cir­cumstances. Research prior to the develop­ment of this instrument was based on fairly crude assessments of religious commitment (e.g., church attendance, frequency of prayer, etc.) and progress in clarifying the issue seemed to require a more sophisticated index of religiously based coping responses. Parga­ment et al. (1990) sought to supply such an instrument.

The Religious Coping Activities Scale monitors six types of religious coping. The Spiritually Based Activities subscale records an individual's reliance on a loving relationship with God. With the Good Deeds subscale, high scores reveal attempts to cope by behaving more in conformity with religious commitments. The Discontent sub­ scale records an angry and alienated reac­tion to God and to the church. Interpersonal Religious Support operationalizes tenden­cies to lean on the support of clergy and church members. The Plead subscale re­veals tendencies to question and bargain with God in hopes of obtaining a miraculous solution to personal problems. Religious Avoidance measures a religiously based at­ tempt to divert attention away from stressful circumstances.

Pargament et al. constructed a list of religiously based coping activities by consulting previous research, analyzing writ­ ten accounts of people who used their faith to meet personal challenges, and asking clergy and religious individuals to indicate how reli­gion had played a role in their attempts to cope. A list of 31 religious coping activities was created. These items were combined into a questionnaire that was administered to 528 churchgoers. All of these subjects had used religion to confront stressful experiences within the past year. Respondents noted how strongly they relied on each activity by using a 4-point Likert scale ranging from "not at all" to "a great deal." Five of the six Religious Coping Activi­ties subscales emerged when these data were submitted to a factor analysis. These five factors explained close to 100% of the variance. Three items that did not load on a common factor were combined into a sixth subscale because they seemed to define a theoretically meaningful construct. In the factor analysis, the Spiritually Based Activi­ties subscale was defined by 12 items, with 6 for Good Deeds, 3 each for Discontent and Plead, and 2 for Interpersonal Religious Support. Religious Avoidance was the sub­ scale created out of three items that did not load on a common factor.

This instrument presents a straightforward list of religiously based coping activities and should be easy for subjects to read and understand. Most respondents should be able to complete the scale within 15 minutes.

Pargament et al. supplied useful normative data. Their sam­ple consisted of adults belonging to IO dif­ferent Roman Catholic, Lutheran, Presby­terian, Episcopalian, American Baptist, and nondenominational congregations in the mid western United States. Of the stressful events recently experienced by these sub­ jects, the illness or injury of family or friends was most common (25%), followed by the death of a friend or family member (l 8%), interpersonal problems (14%), em­ployment difficulties (8%), and personal in­ juries or illness (8%). Anyone with a MMPI Lie score greater than two was eliminated.

Care was taken to ensure that samples from each congregation were as representa­tive as possible. The final group of 586 par­ticipants was 66% female, 96% white, 38% college educated, and 64% married. Average age was 46. With regard to socioeconomic status, 30% had average family incomes of less than $25,000, with 38% between $25,000 and $49,999 and 32% at or above $50,000. Given the nature of these congre­gations, males and infrequent church atten­ders were slightly underrepresented. As Pargament et al. made clear, however, this is a common problem in psychology of reli­gion research.

Pargament et al. used their scale to predict three outcome measures of coping: a mental health questionnaire, five items esti­mating general nonreligious effects of the stressful event (e.g., how much had been learned, success in controlling emotions, whether individuals were strengthened or made better, etc.), and three other items operationalizing religious outcomes (changes in closeness to God, sense of belonging to church, and spiritual growth).

The Spiritually Based Activities subscale proved to be an especially strong predictor of successful coping according to all three outcome measures. The Good Deeds, Reli­gious Support, and Religious Avoidance subscales also displayed consistently posi­tive effects. Mixed consequences were evi­dent for Plead, as this subscale was associ­ated with poorer mental health but positive religious outcomes. Discontent was consis­tently negative in its apparent influences.

Use of multiple regression procedures demonstrated that the six Religious Coping Activities contributed to the predictability of all three outcomes over and above the variance explained by a wide array of other fre­quently employed religious measures. The six subscales also exhibited significant corre­lations with measures of nonreligious coping activities, and the Religious Coping Activi­ties Scale once again produced an increment in the predictability of outcomes even when entered into the prediction equation after these nonreligious coping activities.

These data clearly documented the valid­ity of the Religious Coping Activities Scale. Particularly impressive were the multiple regression findings in which the six sub­ scales accounted for unique variance not ex­plained by other religious variables or by nonreligious responses to stress. Without doubt, the Religious Coping Activities Scale should be an invaluable research tool for in­vestigators interested in the influence of religion on reactions to stress.

Please read the statements listed below and for each statement please indicate to what extent each of the following was involved in your coping with the event. Please use the following scale to record your answers: