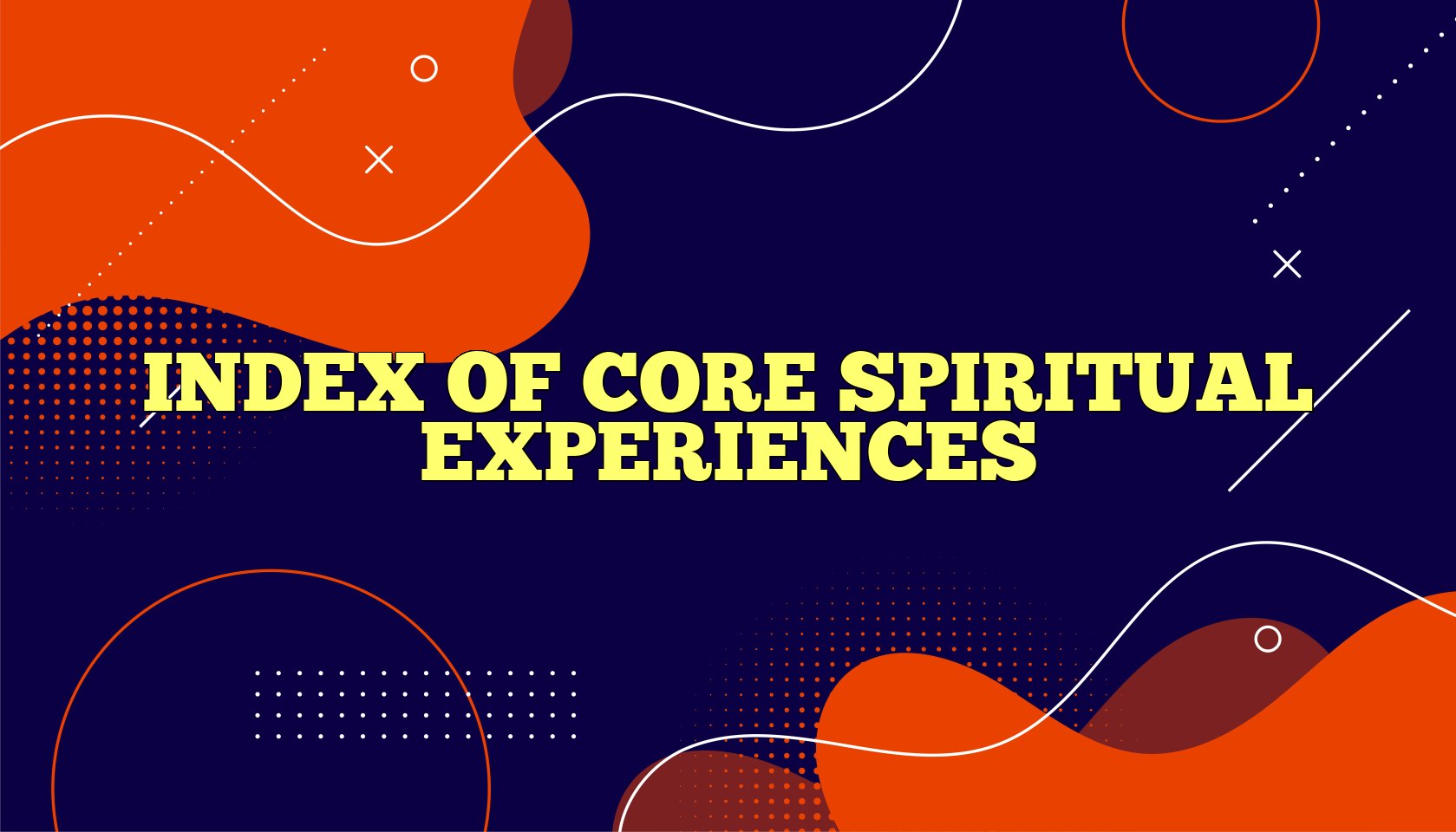 The INDEX OF CORE SPIRITUAL EXPERIENCES (INSPIRIT) was developed to iden­tify experiences that are described in more intense or concrete terms than an amor­phous "belief in God." The characteristic el­ements of core spiritual experiences are (a) a distinct event and a cognitive appraisal of that event resulting in a personal conviction of God's existence and (b) the perception of a highly internalized relationship between God and the person (i.e., God dwells within and a corresponding feeling of unity or closeness to God).

The intent of the INSPIRIT is twofold to identify core spiritual experiences that satisfy the aforementioned criteria and (b) investigate any relationships between this scale and health outcomes.

The INSPIRIT contains 7 items. Items 5, 6, and 7 were newly devel­oped for this index. Items 1, 2, and 4 are modifications of items originally developed by the National Opinion Research Center (NORC) (Davis & Smith, 1985). Item 3 was developed by NORC, in conjunction with Greeley (1974). Scale items were devised or chosen to operationalize the two key charac­teristics that distinguish core spiritual expe­riences.

The original item pool contained 11 questions. These included 4 additional items developed by NORC in conjunction with Greeley. Principal components analysis with orthogonal varimax rotation of the l l items yielded three factors. However, there was a dramatic gap in loadings separating the first factor, containing items 1-7 (eigenvalue = 4.58), from the latter two (items 9-10; eigenvalue = 1.96 and items 8, 11; eigen­ value = 1.29). Because questions 8-11 did not form a unified factor, and because items 1- 7 contained the two key aspects of core spiritual experiences, the final version of the INSPIRIT consists of items 1- 7, which Kass et al. (199l) identified as assessing the two fundamental aspects of Core Spiritual Experiences. Items 3, 5, and 7 identify experiences leading to a conviction of God's existence, whereas items 1, 2, 4, and 6 mea­ sure behaviors and attitudes that would be present among those experiencing a close­ ness to God.

In scoring the INSPIRIT, each item re­ceives a score of l-4, and subjects are di­rected to circle the response that best de­ scribes themselves. The subject's total INSPIRIT score is the mean of all items weighted equally. Scores range from 1.75 to Scores ranging from 3.5 to 4.0 were considered a strong indication of the occur­rence of at least one core spiritual experi­ence.

Scoring the checklist format of item 7 has produced. recent controversy. The author utilizes the highest score recorded for any of the 12 subtypes as the score for the whole question (Kass et al., 1991). VandeCreek, Ayres, and Bassham (1995) suggest includ­ing all responses on the 12-part checklist. VandeCreek et al. (1995) claim that the Kass method of scoring excludes significant data of potential clinical importance. Utiliz­ing the VandeCreek method of scoring, ap­ proximately 80% acknowledged at least one experience that strengthened their belief in God (coding at least one item as "3" or "4"), whereas the Kass method reported between 5% and 30%.

The administra­tion of this paper-and-pencil measure re­ quires no special skills. In an attempt to dif­fuse social desirability, instructions emphasize that there are no "right" or "wrong" answers, and respondents are en­couraged to employ their personal definition of what they call "God" when responding to the items.

The INSPIRIT was sampled against a group of 83 adult outpatients participating in a hospital-based behavioral medicine program for various medical diagnoses, including hypertension, cancer, musculoskeletal disorders, and chronic pain. This rather unique standard­ization group was necessary in order to measure the hypothesized relationship be­ tween core spiritual experiences and health improvements. The sample consisted of pre­ dominantly white (94%), female (66%) out­ patients of divergent religious backgrounds; Catholic (37%), Protestant (23%), and Jew­ish (40%). The educational background was significantly above average, with a mean in­dicating most participants had received some degree of postsecondary schooling (M = 16. l years, SD = 2.5). There is both an overrepresentation of whites and an under­ representation of the less educated, which limits the generalizability of the INSPIRIT beyond this selective sample.

In response to this limitation, a second study by VandeCreek et al. (1995) tested the INSPIRIT in a more generalized health-care setting with a larger group of respondents. Data were collected from 247 outpatients at a cancer hospital and 124 family members in a surgical waiting room. The majority of respondents were married (72%), white (91%), and male (60%). The mean age was 50 years (range = 17 to 78) and the level of education was almost equally distributed: 38% had completed high school, 30% had taken some college courses, and 32% had graduated from college. Differences be­ tween the two samples had little effect, with mean scores and standard deviations pro­duced in the VandeCreek et al. study (M = 2.97, SD= .74) similar to those reported by Kass; (M = 2.80, SD = .83). While the nor­mative data are based on a wide variety of respondents, generalizability is still limited until efforts are made to investigate how the INSPIRIT functions among minority groups.

A principal components analysis of the INSPIRIT retained all seven items in a single component (eigenvalue= 4.42), ac­ counting for 63% of the explained variance and loadings (representing the correlation between each item and the single compo­nent extracted) ranging from .69 to .85. Uti­lizing Cronbach 's coefficient alpha, an in­ ternal-consistency reliability estimate, the INSPIRIT yielded a .90 correlation, indicat­ing an impressive degree of internal reliabil­ity.

Reliability estimates are also available for the VandeCreek method of scoring. When the number of factors was limited to two, factor analysis of the six items and the 12 parts of the checklist resulted in one fac­ tor accounting for 34% of the variance and a second factor accounting for 8.4% of the variance. Loadings ranged from .52 to .68 for the first factor, and from .65 to .79 for the second factor. Cronbach's coefficient alpha was .88.

Hypothesized group differences and correlations were used to assess the construct validity of the INSPIRIT. Based on several studies that concluded that medi­tation is significantly related to the occur­rence of spiritual experiences (Davidson, 1976; Kornfield, 1979; Walsh, 1978), Kass et al. (1991) hypothesized a relationship be­ tween INSPIRIT scores and meditative ex­perience. At the onset of treatment, subjects in the sample were divided into two groups: those with less than one month of medita­tive experience and those with more than one month of meditative experience. As pre­dicted, a significant difference {p < .04) in means was found between the less experi­enced (M = 2.70) and the more experienced (M = 3.15). In demonstrating the ability of the INSPIRIT to discriminate between groups where one might logically predict differences in degree of core spiritual expe­ riences, these results assist in establishing construct validity.

Convergent and discriminant construct validity were supported in a series of pre­dicted correlations between the INSPIRIT and other measures of religious or spiritual experiences. More specifically, Kass et al. (1991) hypothesized, and analysis sup­ ported, a positive correlation between the INSPIRIT and the Intrinsic scale of the Re­ligious Orientation Inventory (ROI) (Allport & Ross, 1967) and a weak negative correla­tion with the Extrinsic Scale of the ROI (r = .69, p < .0001 and r = -.26, p < .06; respec­tively).

Additional assessments of construct va­lidity were reported in the VandeCreek et al. study (1995). Correlations between the IN­ SPIRIT and the Intrinsic Religious Motiva­tion Scale (IRMS) (Hoge, 1972) were sub­stantial, further suggesting that the INSPIRIT scale reflects intrinsic religiosity. VandeCreek then compared INSPIRIT cor­ relations with the IRMS using the Kass method for scoring item 7 (r = .61) and the VandeCreek method for scoring item 7 (r = .54). VandeCreek explains this discrepancy by suggesting that the spiritual experiences reported in the seventh item may not be re­flective of intrinsic religiosity. Alternatively, because the Kass scoring method places less emphasis on the quantity of spiritual experi­ences and more emphasis on the cognitive impact of spiritual experiences (irrespective of their number), it is possible that this scor­ing method is more reflective of intrinsic re­ligiosity.

Further investigation of both scoring methods are required for clarification of these issues.

Instructions: The following questions concern your spiritual or religious beliefs and experi­ences. There are no right or wrong answers. For each question, circle the number of the answer that is most true for you.

People have many different definitions of the "Higher Power" that we often call "God. " Please use your definition of God when answering the following questions.

The response choices are:

I had this experience and it:

Davidson, J. (1976). The physiology of medita­tion and mystical states of consciousness. Perspec­tives in Biology and Medicine, 19, 345-379.