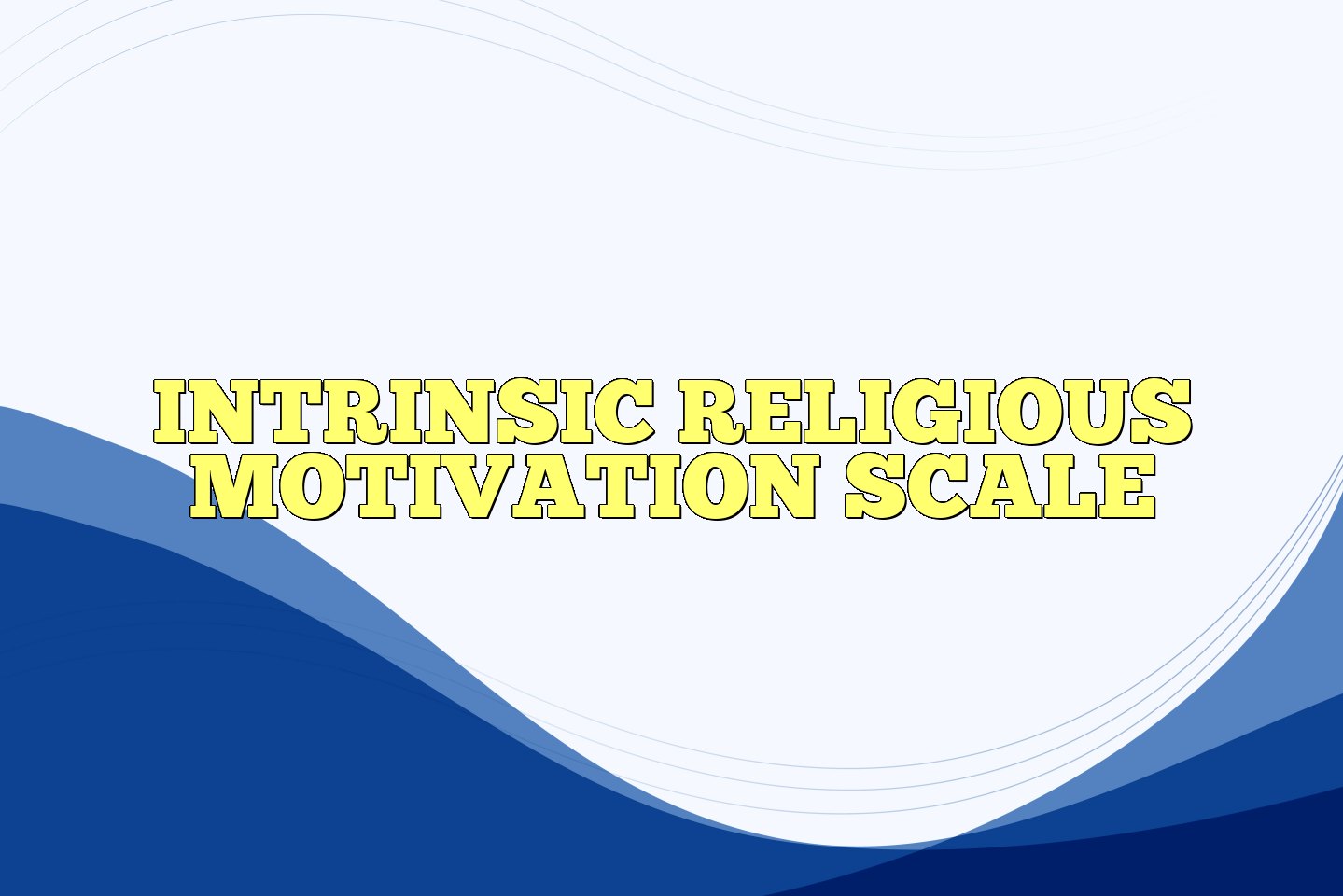 The Intrinsic Religious Motiva­tion Scale measures different ways of being religious. Although it was developed and tested within the Christian tradition, the items are applicable to a wide range of religious groups. Only two of the ten items comprising the instrument make a specific reference to God, and no items refer specifi­cally to Christianity. In addition, the instru­ment clearly avoids the potentially divisive issues of religious behaviors and beliefs. In­ stead, this scale measures the motivation be­ hind religious activity. It was Hoge's (1972) hope that by limiting the instrument to the measurement of only one aspect of reli­giousness the instrument would produce a unidimensional scale. Hoge believed that such a scale would add conceptual clarity to the relationships between religiousness and other factors of interest to social scientists (e.g., prejudice).

The Intrinsic Religious Moti­vation Scale contains ten items in a Likert­ like format. These items are designed to tap the dimension Hunt and King (1971) called "ultimate versus instrumental." Conceptu­ally, this dimension is derived from the mo­tivational aspect of Allport and Ross's (1967) Religious Orientation Scale. Unlike similar instruments (e.g., Feagin, 1964), the final items for the Hoge instrument were se­lected because they loaded on a single fac­ tor. On one end of the dimension are seven intrinsic items, and on the other end are three extrinsic items. Obviously, Hoge as­sumed that intrinsic and extrinsic faith an­chor different ends of the same dimension instead of assuming that intrinsic and extrinsic faith might represent two separate di­mensions. It should be noted that some of the items on Hoge's scale were taken from the Allport and Ross scale and the Feagin scale. Respondents have four response op­tions to the scale items ranging from "strongly agree" (1) to "strongly disagree" (4). In the computation of the overall score, the extrinsic items are reversed. Thus, a low overall score indicatesintrinsicness and a high score indicates extrinsicness.

The most useful source for someone using the scale is the original article by Hoge (1972). This article presents the actual items and makes a few suggestions for administering and scoring the instrument. The inclusion of intrinsic and extrinsic items may provide some pro­tection against response bias.

Several strategies for scoring the scale appear in the literature. The strategy advo­cated by Hoge is to reverse score the extrin­sic items, add the intrinsic and extrinsic items together, and then report an overall in­trinsic score. An alternative strategy has been to separate the intrinsic and extrinsic items and report them as separate scale val­ues (e.g., Spilka, 1977). A final variation in the literature (e.g., Sapp & Jones, 1986) is to use the Hoge instrument as a measure of intrinsicness along with some other measure of extrinsicness.

The instrument is straightforward and short, and it avoids sectarian language. It should be a particularly useful instrument for researchers that are concerned about par­ticipant fatigue effects.

Reversing the extrinsic items, Hoge reported that the reliability of the scale was .90 using the Kuder-Richardson Formula 20. The item-to-item correlations ranged from a low of .13 to a high of .72.

Reliability information was also provided by Hoge and Carroll (1978) from their sur­ vey of members of eight suburban Protes­tant churches. In attempting to identify de­ terminants of commitment in suburban churches, Hoge and Carroll administered a shortened version (six items) of the Intrinsic Religious Motivation Scale. With the short­ened version, Cronbach's alpha was .84.

Validity: In the original report by Hoge, par­ticipants were nominated by ministers who identified them as being either intrinsic or extrinsic in their religious orientation. Only those items that correlated with the minis­ters' judgments were included in the final form of the scale. The overall final version of the scale correlated .59 with these judg­ments. In addition, the Intrinsic Religious Motivation Scale was correlated with the Allport and Ross (1967) and the Feagin (1964) intrinsic scales. The correlations with these scales all ranged from .71 to .87. Of course, these high positive correlations can be explained in part by the common items shared by the scales.

Please use the following scale to indicate your response to each statement listed below:

Feagin, J. R. (1964). Prejudice and religious types: A focused study of southern fundamentalists. Journal for the Scientific Study of Religion, 4, 3-13.