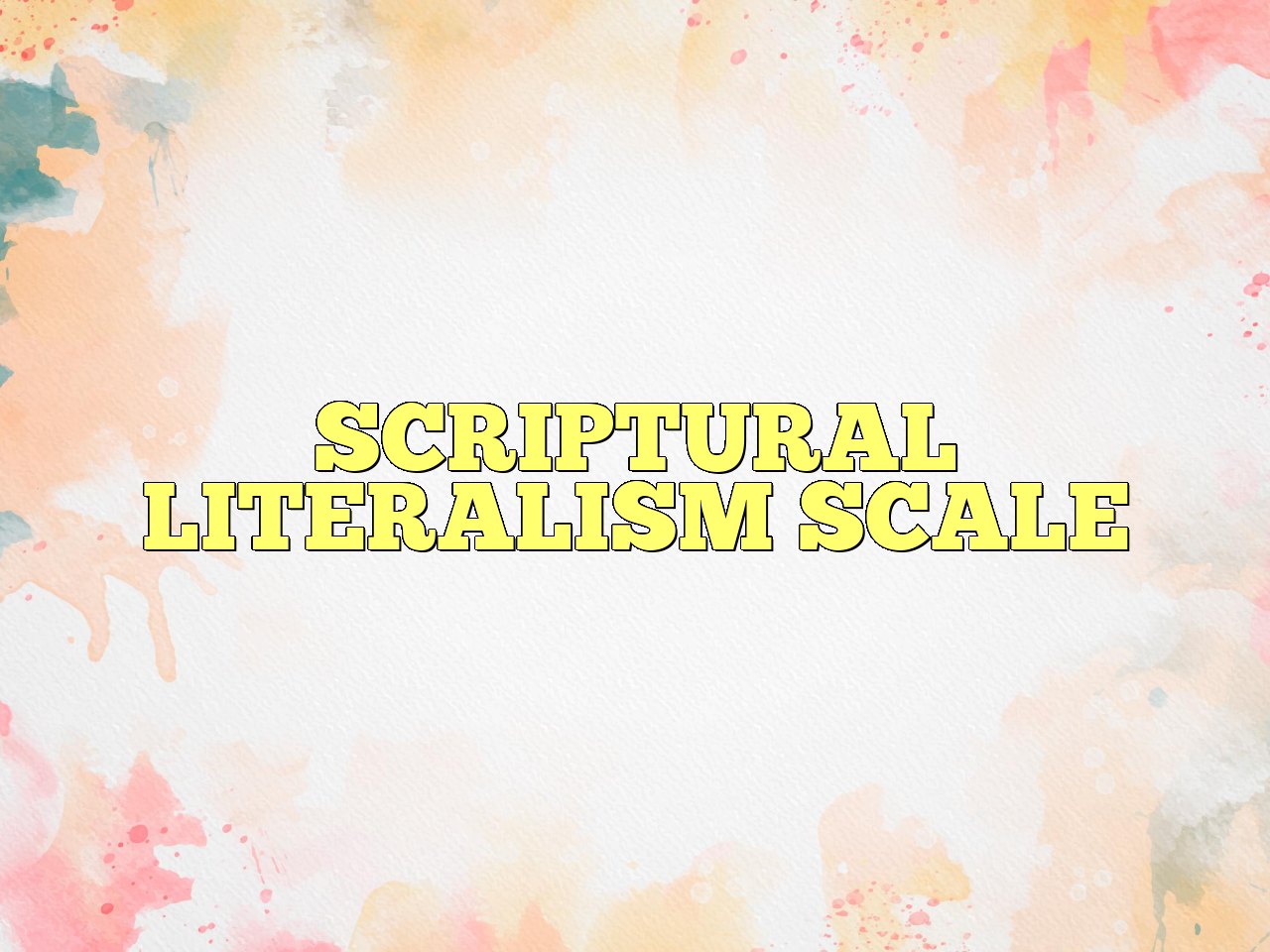 The Scriptural Literalism Scale as­sesses the degree to which an individual be­lieves in a literal, God-inspired interpretation of the Bible-as opposed to viewing the Bible as ordinary literature not necessarily in­ spired directly by a personal deity. This scale is unidimensional and evaluates the degree of scriptural literalism along a continuum.

Hogge and Friedman (1967) constructed an initial pool of 30 statements concerning the interpretation of Scripture, which they administered to a sample of 43 undergraduate students. The 16 items having the highest correlation with the sum of the other items in the pool were selected for the final version of the instrument, which was administered as part of a comprehensive sur-

vey of student samples at several major uni­versities in Texas. Subjects respond to the individual items according to a 5-point Lik­ert Scale format: +1 = slightly agree, +2 = agree, +3 = strongly agree, -1 = slightly dis- agree, -2 = disagree, -3 = strongly disagree. The 16 items having the highest correla­tion with the sum of the other items in the pool were selected for a shorter version of the scale (SLSc). In addition, two 12-item parallel forms of the scale (SLSa and SLSb) were constructed. These items included such statements as "the scriptures contain religious truths," "quotations appearing in the Scriptures are accurate," "the Scriptures are a collection of myths," and "the passage of time is accurately presented in the Scrip­tures."

The three forms of the SLS were in­cluded as part of a longer form (the "attitude survey") and were readministered to univer­sity students to develop norms for this in­strument.

The instrument is worded in a straightforward manner that en­ables it to be easily administered and scored. Furthermore, it is a brief instrument than can be easily incorporated into a more comprehensive religious assessment battery, as was done in the Jennings (1972) study. It should be noted that some of the items are reverse scored.

Split-half reliability coefficients are available in both the Hogge and Friedman (1967) and Jennings (1972) studies, with all above 0.90. Jennings also computed a Spearman-Brown coefficient value for re­ liability (r = 0.95) derived from the split­ half coefficient. Taken together, these val­ ues indicate a high degree on interitem consistency in measurement.

Scores compared on the Scriptural Literalism Scale for religious groups sub­stantially differ on the extent to which they take a more literal interpretation approach to the Scriptures. In the Hogge and Friedman study, both Baptist and Methodist students scored significantly higher on the scale than Unitarians. Freshmen tended to take a signif­icantly more literal approach than seniors, and females were significantly more literal than males. All of these between-group differences are consistent with previous find­ings pertaining to descriptive traits that are related io more conservative versus less con­servative views of scripture, and support the validity of this measure.

For each of the following statements, circle the choice that best indicates the extent of your agreement or disagreement as it describes your personal experiences:

(R) Means the item is reversed-scored.