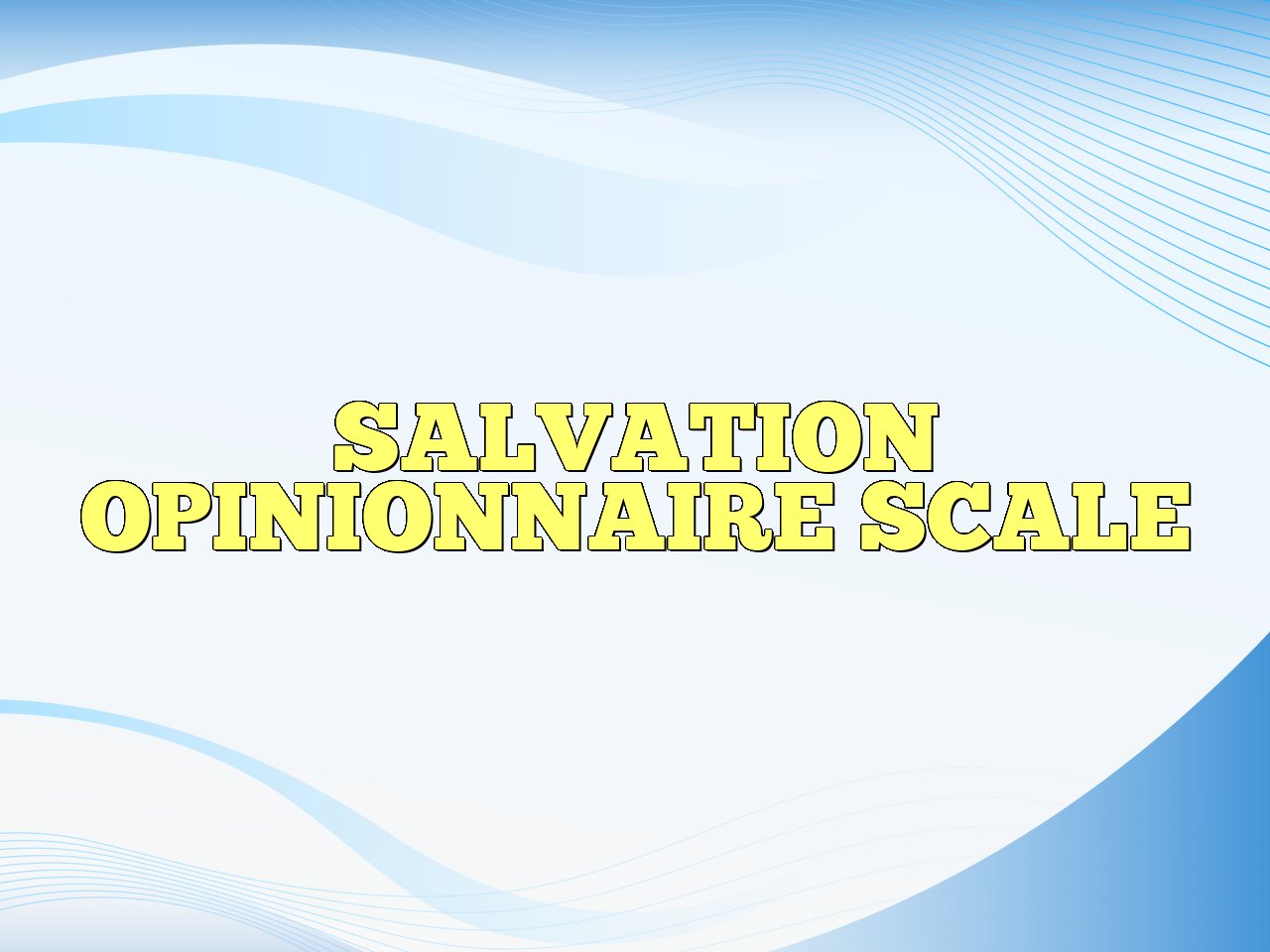 The Salvation Opinionnaire (SO) is intended to be "a brief measure of religious conservatism, liberalism, and radicalism in the Christian tradition" (Dreger & Adkins, 1991, p. 179). The authors' original intent was to place subjects appropriately along a continuum from conservative to radical.

The SO consists of 25 items, each of which represents an opinion about the nature and purpose of salvation. It is to be completed in a forced-choice agree-or­ disagree format. Dreger and Adkins (1991), the only published source containing the complete list of scale items, gives a scoring procedure based on the Thurstone method (Thurstone & Chave, 1929). This method involves summing item weights for en­dorsed items to get a raw score, then con­ verting this raw score into a percentile score. Although the scale was originally at­ tributed to Wendland (1949), all known re­ search using the scale to date has been done by Dreger (1952; Dreger, 1991; Dreger & Adkins, 1991).

The Thurstone scoring method described by Dreger and Ad­kins (1991) is more complex and involved than the summed scoring method frequently used with Likert scales. However, the process of deriving raw scores from the item weights could be easily automated using any statistical computer package allowing for variables to be created from equations. Automating the process of deriving percentile scores would be much more complex, but it may be more efficient than datamining per­ centiles by hand if a sufficiently large num­ber of subjects is involved.

The initial stan­dardization of the SO is most clearly de­ scribed in Dreger and Adkins (1991). Starting with a pool of hundreds of potential items, the 145 that seemed most probable were selected. Using methods suggested by Thurstone, these were reduced to 45 items on the basis of expert judges' responses. These items were given to 763 respondents and were reduced to 25 items using Thur­stone's method of equal-appearing intervals. A scoring procedure for this 25-item scale was based on the responses of another group of 351 subjects. These results yielded a tri­ modal distribution, interpreted by Dreger (1952) as corresponding to religious conser­vatism, liberalism, and radicalism.

The purpose of the Dreger and Adkins (1991) article was to standardize the scale, using a similar procedure. The initial judges were 48 church professionals and seminari­ans and another religiously heterogenous sample of 48 laymen. These judges rated each item on a 1 (conservative) to 7 (liberal) scale; these were used to derive scale values for each item. Seven hundred seventy-eight subjects then completed the SO in the forced-choice format; 485 of these subjects were high school, undergraduate, and gradu­ate students from one southern city, and the remainder were members of churches and church school classes in two southern cities. The overall sample had an average age of years, with approximately equal num­ bers of men and women.

Dreger (1991) examined the latent struc­ ture of the SO using the responses from these 778 subjects. Using a combination of exploratory and confirmatory factor analy­ sis on all subjects' responses or those for odd-even halves, he interpreted his results as showing a four-factor structure: Conserv­ ative, Liberal: Integration and Growth, Lib­ eral: Freeing Oneself from Insincerity and Conflict, and Radical. However, Dreger does not give a procedure for, or even men­ tion the possibility of, scoring the SO for each of these dimensions.

None of the published uses of the SO give any reliability statistics. It is unclear how reliable the scale could be using the unidimensional scoring procedure recommended by Dreger and Adkins (1991), given the multidimensional nature of the scale discovered by Dreger (1991).

Dreger (1952) did extensive intel­ligence and personality testing with 60 se­lected subjects from his sample. These sub­ jects were categorized as liberal or conservative according to denominational membership. Dreger found a significant dif­ference between the conservatives (M = 7.84) and liberals (M = 4.00) on their SO scores (t = 27.33, p < .01). He also found that SO scores were correlated with scores on the Ferguson (1941) Primary Social Atti­tudes Scale No. l: Religionism (r (28) =.77, p < .01). As a part of the SO, subjects are asked to rate themselves on the dimension of religious liberalism and religious conservatism. Dreger and Adkins (1991) reported that these ratings were virtually uncorrelated (r = .04, p < .22) with SO scores and that similar results were found in the initial standardization (Dreger, 1952). They also reported that when subjects were categorized by denomination ordered by how conservative or liberal the denomination is, these categorizations corre­lated .26 (p < .0001) with SO scores.

Check (with an X) those statements below that describe your understanding and attitude to­ ward "salvation." Leave all other statements blank.

I consider myself a: (Mark an X anywhere along the line.)

Numbers in parentheses after each item represent the factor identified by Dreger (1991) on which that item loads:

Dreger, R. M. (1991). The latent structure of the Salvation Opinionnaire, a measure of religious atti­tudes in the American Christian tradition. Educational and Psychological Measurement, 51, 707-719.