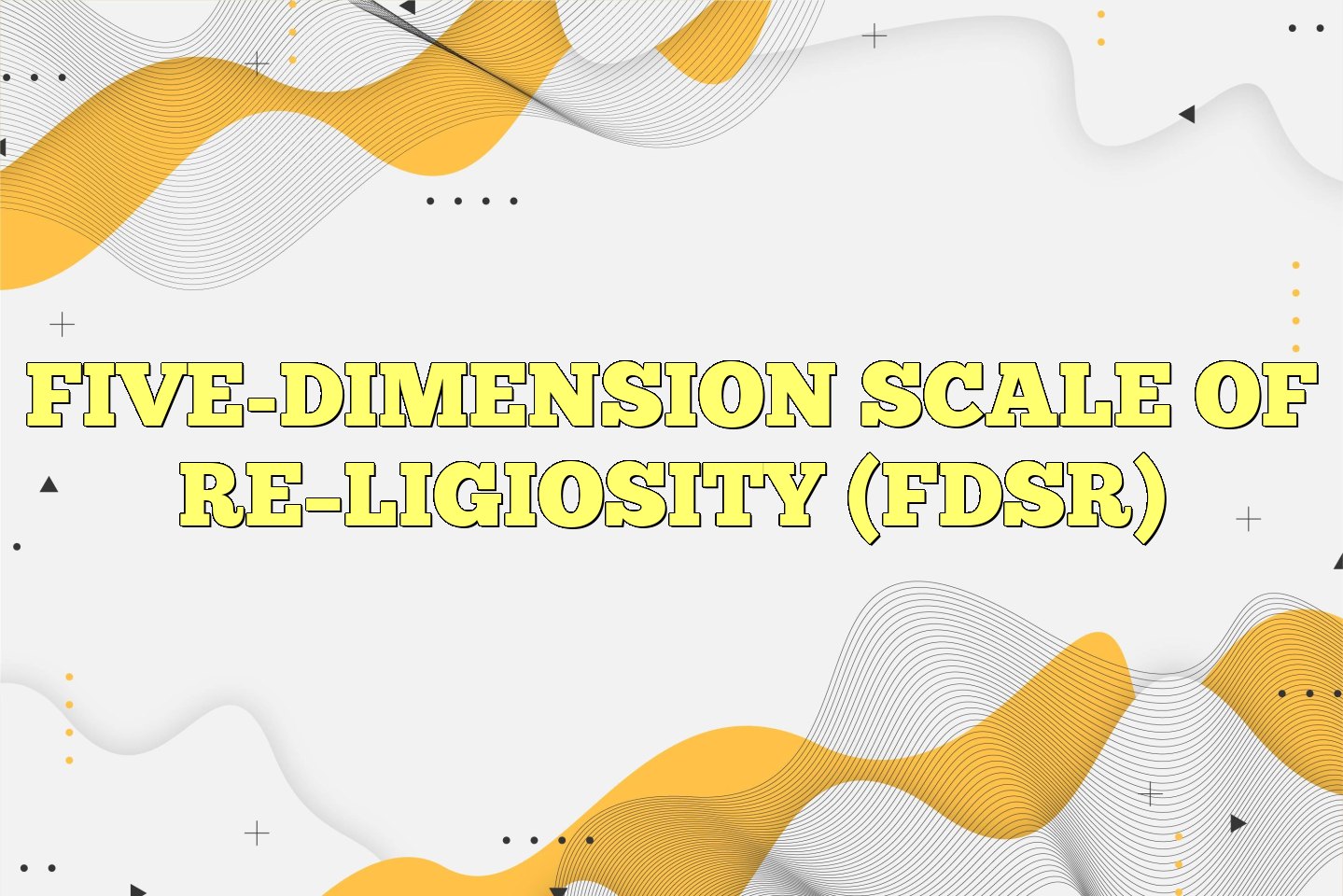 The Five-Dimension Scale of Re­ligiosity (FDSR) measures the major dimen­sions of religiosity first described by Glock (1962). They include the ideological (be­lief), intellectual(knowledge), ritualistic (re­ligious behavior), experiential (feeling and emotion), and consequential (effect of reli­gion in everyday life) dimensions. Five Guttman-type scales were constructed, one for each aspect. Faulkner and DeJong as­sume that his typology represents separate and distinct components of religiosity.

Faulkner and DeJong base their measure on the assumption that these dimensions are crucial. Unfortunately, there has not been a consensus about the nature of this multidimensional construct in more than a decade of research.

The authors propose a Guttman scaling procedure that results in five individual scores rather than a single summary score on Glock's dimensions. The items for each scale are arranged sequentially from stronger to weaker statements of attitude, and it is presumed that respondents who agree with stronger statements also agree with all weaker items.

The five scales are composed either of four or five items, each containing from two to six options. Scoring involves counting the positive responses indicated by the as­terisk on the scales provided in the appen­ dix. For example, if a person has a score of three on the ideological scale, we know she is not as high as a score-four person but is higher than a score-two person. Further, this indicates that she "affirmed the keyed response on questions three through five, but to no others." This allows the researcher, theoretically, to know an individual's pat­ tern of response for an entire scale.

This instrument's 23 items require less than 10 minutes to complete. Beyond providing the actual scales in the initial article, no special in­structions are provided for administering or scoring. Presumably the scales are pre­sented in the order given, but without the la­ bels. Some scoring confusion may result from referring at times to the whole instru­ment as a scale, the five scales, individual items on each scale, and each option in every item. Lettering the options and se­quentially numbering all 23 items might re­ duce confusion.

Since these scales were developed for re­ search purposes, the authors assume more knowledge of the Guttman scaling proce­dure than many users will have. For further detail regarding Guttman scaling and scor­ing, see Ford (1950). Basically, one's score on a scale is the total number of items indi­cating a traditional religious response. For a five-item scale, the scores range from 0 through 5. Grouped data are then translated into percentage of positive responses.

The five scales have not been standardized. Since these scales are used exclusively for research pur­poses, no manual is provided to assist in ad­ ministration, scoring, or interpretation.

Test-retest or other reliability coefficients were not reported, but the coefficient of reproducibility indicates the unidi­mensionality strength of a Guttman-type scale. The accepted minimum level is .90. All five scales met this minimum standard when initially tested at Pennsylvania State University in 1966 on a sample of 362 un­dergraduates. In 1968, Clayton reported sta­tistics on 873 undergraduate respondents from a Southern Protestant private univer­sity. Clayton's sample yielded five coeffi­cients of reproducibility equal to or higher than the Penn State sample. It appears that these scales have demonstrated an accept­ able level of reliability.

Faulkner and Delong (1966), Clayton (1968), Clayton and Gladden (1974), and Delong, Faulkner, and Warland (1976) provide evidence that all five scales more than adequately met the minimum cri­teria of unidimensionality. However, the fact that all five scales in all data sets are unidimensional says nothing about their in­ dependence from one another. Intercorrela­tion of these scales on widely diverse sam­ples, as well as many factor analyses (both varimax and oblique rotation), yield empiri­cal results that are vehemently argued in one of two directions. Either the five-dimen­sional scales measure five real and separate dimensions of religiosity or the five-dimen­sional scales measure different aspects of ideological commitment manifested in sev­eral directions.

Researchers agree on the dominance of the ideological factor over all other dimen­sions. In a factor analytic study, Clayton and Gladden (1974) report that the ideological commitment factor accounts for 78 percent of the common variance for their 1967 sample and 83 percent of the variance for the 1970 sample. Other minor factors were ex­tracted, but a second-order factor analysis yielded one general factor. Clayton and Gladden conclude that "religiosity is essen­tially a single-dimension phenomenon com­ posed primarily of ideological commitment with experience and practice being evidence of the strength of that initial and core com­mitment at the belief level" (p. 141).

In the initial study, the between-scale correlation coefficients ranged between .58 (between ideological and intellectual) and .36 (between experience and consequential) (Faulkner & Delong, 1966). These are typical moderate correlations as reported from several studies. They argued that the moder­ ate correlations supported the obvious mul­tidimensionality of such a complex phenomenon as religiosity. By 1976, they make a small concession that "the time may have come to consider social consequences as primarily a dependent variable rather than an integral part of religiosity" (Delong, Faulkner & Warland, 1976, p. 883). They concede that the consequential dimension may only be a result of the other dimensions operating. Nevertheless, they hold fast to multidimensional theory, arguing that their instrument has validly tapped the construct. The problem seems to be one of speci­ficity versus generality in measuring the re­ligious variable. Delong, Faulkner, and Warland (1976) argue that generalized and specific definitions of religiosity are com­patible. While they believe their findings support multidimensionality, it is their judg­ment that "the one-not-five or the three-not­ eleven debates over the number of dimen­sions of religiosity are primarily a function of level of abstraction and the subdivision of dimensions" (p. 884).

Another criticism by Weigert and Thomas (1969) is the wording of items used to measure Glock's dimensions. They criti­ cize the validity of this instrument on the grounds that the same semantic categories of stimuli (i.e., use of the words "view," "opinion," and "believe" in items found on the ideological as well as the intellectual di­mensions) are used. There are further exam­ples: the knowledge dimension contains three "belief" items; the ritualistic dimen­sion has two items that use the words "feel" and "believe." While this is not exhaustive, the point is made that Weigert and Thomas believe the authors do not faithfully con­ struct items that validly measure the origi­nal dimensions proposed by Glock. Faulkner and Delong (1969) wrote a rejoinder to Weigert and Thomas that effectively blunted much of their critique.

The question of construct validity, then, is still open, and it amounts to a debate over the interpretation of the findings of diverse data sets. The scales are designed for re­ search only and are not recommended for clinical assessment of religiosity.

The exact wording of items included in the religiosity scales is shown below, with an asterisk (*) marking the response defined as indicating a traditional religious response.

1. How do you personally view the story of creation as recorded in Genesis?
2. Which of the following best expresses your opinion concerning miracles?
3. What is your view of the following statement: Religious truth is higher than any other form of truth.
4. Would you write the names of the four Gospels? What are the first five books of the Old Testament?
(The second question was used for Jewish respondents.)

1. Do you feel it is possible for an individual to develop a well-rounded religious life apart from the institutional church?
2. How much time during a week would you say you spend reading the Bible and other reli­ gious literature?
3. How many of the past four Sabbath worship services have you attended?
4. Which of the following best describes your participation in the act of prayer?
5. Do you believe that for your marriage the ceremony should be performed by:

1. Would you say that one's religious commitment gives life a certain purpose which it could not otherwise have?
2. All religions stress that belief normally includes some experience of "union" with the Di­ vine. Are there particular moments when you feel "close" to the Divine?
3. Would you say that religion offers a sense of security in the face of death which is not otherwise possible?
4. How would you respond to the statement: "Religion provides the individual with an inter­pretation of his existence which could not be discovered by reason alone."
5. Faith, meaning putting full confidence in the things we hope for and being certain of things we cannot see, is essential to one's religious life.

I. What is your feeling about the operation of nonessential businesses on the Sabbath?
2. A boy and a girl, both of whom attend church frequently, regularly date one another and have entered into sexual relations with each other. Do you feel that people who give at least partial support to the church by attending its worship services should behave in this manner? Which of the following statements expresses your opinion concerning this matter?
3. Two candidates are seeking the same political office. One is a member and a strong par­ticipant in a church. The other candidate is indifferent, but not hostile, to religious organi­zations. Other factors being equal, do you think the candidate identified with the church would be a better public servant than the one who has no interest in religion?
4. Suppose you are living next door to a person who confides in you that each year he puts down on his income tax a $50.00 contribution to the church in "loose change," even though he knows that while he does contribute some money to the church in "loose change" each year, the total sum is far below that amount. Do you feel that a person's religious orientation should be reflected in all phases of his life so that such behavior is morally wrong-that it is a form of lying?