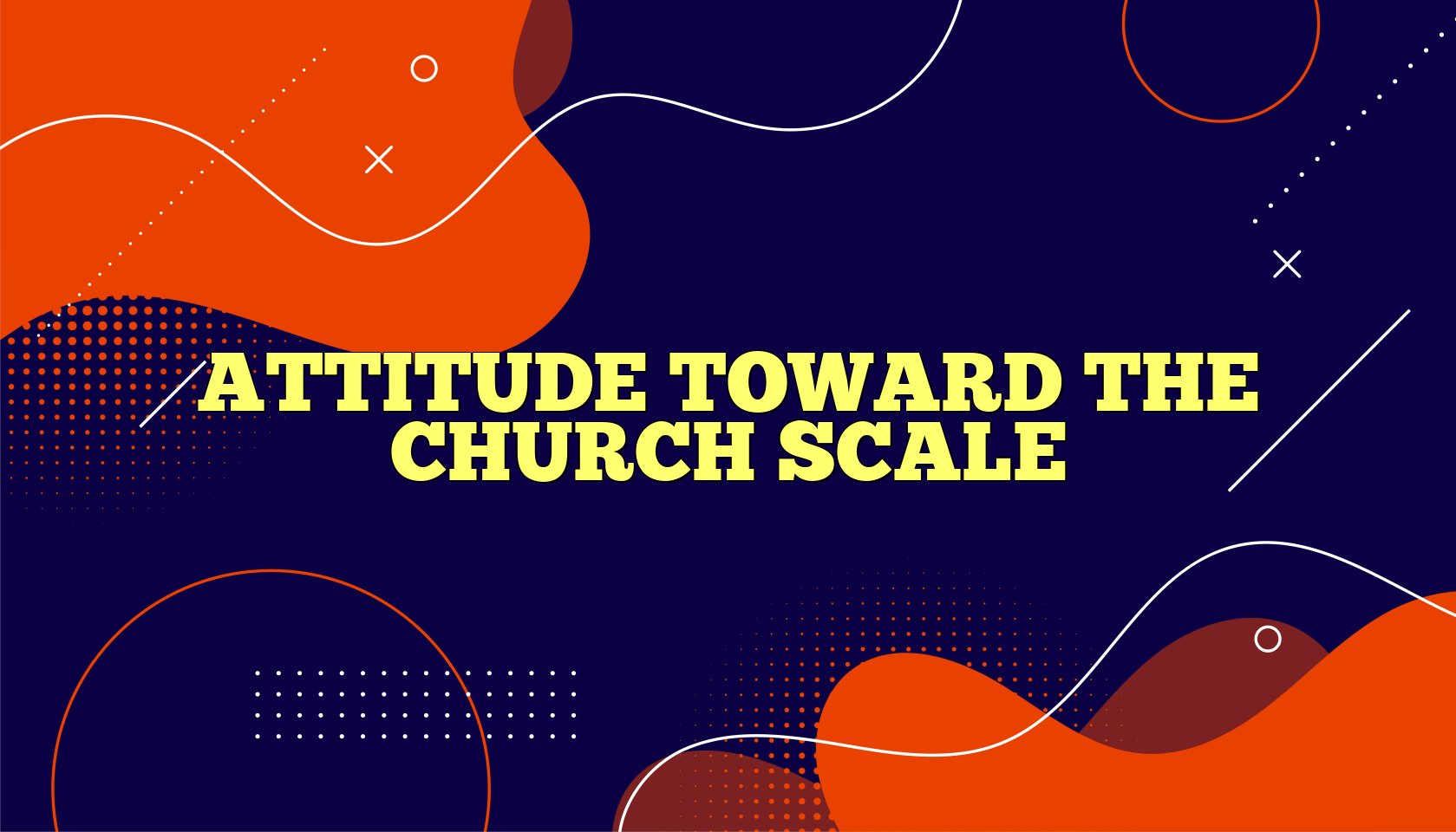 The Attitude toward the Church by low scores is the result of an arbitrary Scale was designed to measure a range of favorable and unfavorable attitudes. The scale's items represent "the church" as alter­nately a generalized institution or agency and a specific locus of religious services and social relations. The authors emphasize that the scale is intended as an unbiased measure without any implied judgment about persons with high or low scores. That favorable attitudes happen to be represented decision to assign O to the extremely favor­ able end of the scale.

A Scale for Measuring Attitude toward the Church is the best known and most widely used of the several religiosity scales developed by L. L. Thurstone and his collaborators early in the twentieth century. Other scales formally published by the Uni­versity of Chicago Press between 1929 and 1933 include five forms of the scale of Atti­tude toward God, which together assess the sensed reality of God (Forms A and B), the influence of belief in God on conduct (Forms C and D), and definitions of God (Form E, which is the only one of the five that is not quantitatively scorable); two forms of the scale of Attitude toward the Bible (Forms A and B), on which scores range from unqualified affirmation and re­spect to rejection and disparagement; and two forms of the scale of Attitude toward Sunday Observance, on which scores ranges from support of strict Sunday observance to total opposition to it. Several dozen related scales, checklists, and qualitative questionnaires, likewise intended for use by religious educators but less thoroughly developed than the ones listed above, were eventually published by Chave (1939). The develop­ment of the published scales was prompted by Thurstone's short-lived interest in exploring the usefulness of psychophysical meth­ ods for measuring a variety of social atti­tudes. The specific religious content of these scales was provided by collaborators Ernest Chave and C. K. A. Wang.

The 45 randomly ordered items of the At­titude toward the Church Scale were selected from an original list of 130 items on the basis of their content, degree of favorableness rat­ings, internal consistency, and median rank­ings. Four items were selected to represent each of 11 class-intervals of the scale; one additional item fell in an extreme, twelfth interval. Scoring is carried out by either of two methods, which reportedly yield substantially the same statistical results. One may calculate the mean scale-value (median rank­ing, as reported by Thurstone and Chave) of all the items that the subject has endorsed. Alternatively, after ranking the 45 statements according to their reported scale-values, one may calculate the mean rank order of the items endorsed by the individual.

The scale, which takes about 15 minutes to complete, can be used with individuals or groups. It may also be given to subjects to take at home. No time limit should be imposed. Subjects are to be told that altered statements will be ig­nored in the scoring process; each statement must either be endorsed as it stands or be left unchecked. There should also be no discussion of the statements before the questionnaire is completed. The authors rec­ommend offering the respondents the oppor­tunity to remain anonymous if local circum­ stances make them reluctant to be identified with their own responses.

Instructions accom­panying the Attitude toward the Church Scale provide a transformed scale-score for each statement-derived by multiplying the median ranking by 2.5 and rounding to the nearest whole number-and a table of six categories for interpreting the mean scale­ scores. These categories range from "strongly favorable to the church" to "strongly antagonistic." The quasi-normative data provided in Thurstone and Chave (1929), in contrast, are based on the original median rankings. The questionnaire was ad­ ministered to both undergraduate and gradu­ate students at the University of Chicago, to divinity students, and to persons attending the Chicago Forum, a public-interest lecture series sponsored by the Illinois League of Women Voters. The number of respondents ranged from 103 (the divinity students) to 548 (the freshmen). Frequency distributions of scores for each of the groups are presented in both tabular and graphic forms; standard deviations are also provided. The four under­ graduate classes and the graduate students showed no striking differences or trends, though there is among them a slight tendency toward bimodality. That tendency was clearer for the respondents at the Chicago Forum, who on the average were less favor­ able to the church than the other groups but also more variable. The group of divinity stu­ dents was by far the most favorable as well as the least variable of the seven groups. Similar data are provided according to reli­gious affiliation (Roman Catholics were most favorable, Jews least, and the Protestants fell in between) and sex (women were slightly more favorable than men, a tendency that also appears in the later literature).

The exceptionally high reliabil­ity of the Attitude toward the Church Scale was calculated by means of the split-half method. To create parallel forms, the re­ searchers first ranked the 45 statements in order of their scale values, from low to high, and then split the successive pairs of state­ments, alternating the form to which the higher-rank item in each pair was assigned. The extremely unfavorable statement left at the end was included in both forms. The two sets of partial scores were then correlated for two groups of respondents. An initial sample of 100 subjects yielded a correlation of .89, which, corrected by means of the Spearman-Brown formula, produced an es­timated reliability of .94 for the full scale. A second group, consisting of 200 university freshmen, yielded comparable reliability co­efficients of .85 and .92.

Reasonably strong evidence for validity is suggested by several findings of Thurstone and Chave. Persons who said that they attended church frequently showed strikingly higher scores than those who did not report frequent attendance. Similarly, persons claiming active church membership scored notably higher than those not report­ing it. Furthermore, scale scores correlated with self-ratings on a simple Likert-type scale ranging from "strongly favorable to the church" to "strongly against the church." Describing this moderately high correlation as "fairly satisfactory," Thur­ stone and Chave note that subjects tended to rate themselves as slightly more favorable to the church on the single rating scale than they proved to be on the more elaborate scale. This tendency, which Thurstone and Chave suspected was the result of social pressure, was particularly notable among those with negative attitudes toward the church. Subsequent research, especially cor­ relations with other religiosity measures (e.g., Wicker, 1971), has added to the evi­dence for validity.

Attitude toward the Church

Respondents are asked to check every statement with which they fully agree.

The Sunday Observance scale was first pub­lished in

The chief source on the development and application of the Church scale is:

Thurstone, L. L., & Chave, E. J. (1929). The measurement of attitude: A psychophysical method and some experiments with a scale for measuring attitude toward the church. Chicago: University of Chicago Press.

Subsequent Research: More than 30 stud­ies have been carried out using the Attitude toward the Church scale, most of them looking for personality and attitudinal corre­lates, tracing out changes over time, or com­ paring various subject groups. Whereas few if any significant personality correlates have been found, several researchers have re­ ported a tendency for those with favorable attitudes toward the church to be more con­ servative, authoritarian, or prejudiced. Jones (1970), in one of the most recent studies to use this scale, found that attitudes toward the church among college students had de­clined over a 37-year period. The Thurstone scales are seldom used today.

Siegman, A. W. (1962). A cross-cultural investi­ gation of the relationship between religiosity, eth­ nic prejudice and authoritarianism. Psychological Reports, 11, 419-424.

Wicker, A. W. (1971). An examination of the "other variables" explanation of attitude-behavior inconsistency. Journal of Personality and Social Psychology, 19, 18-30.