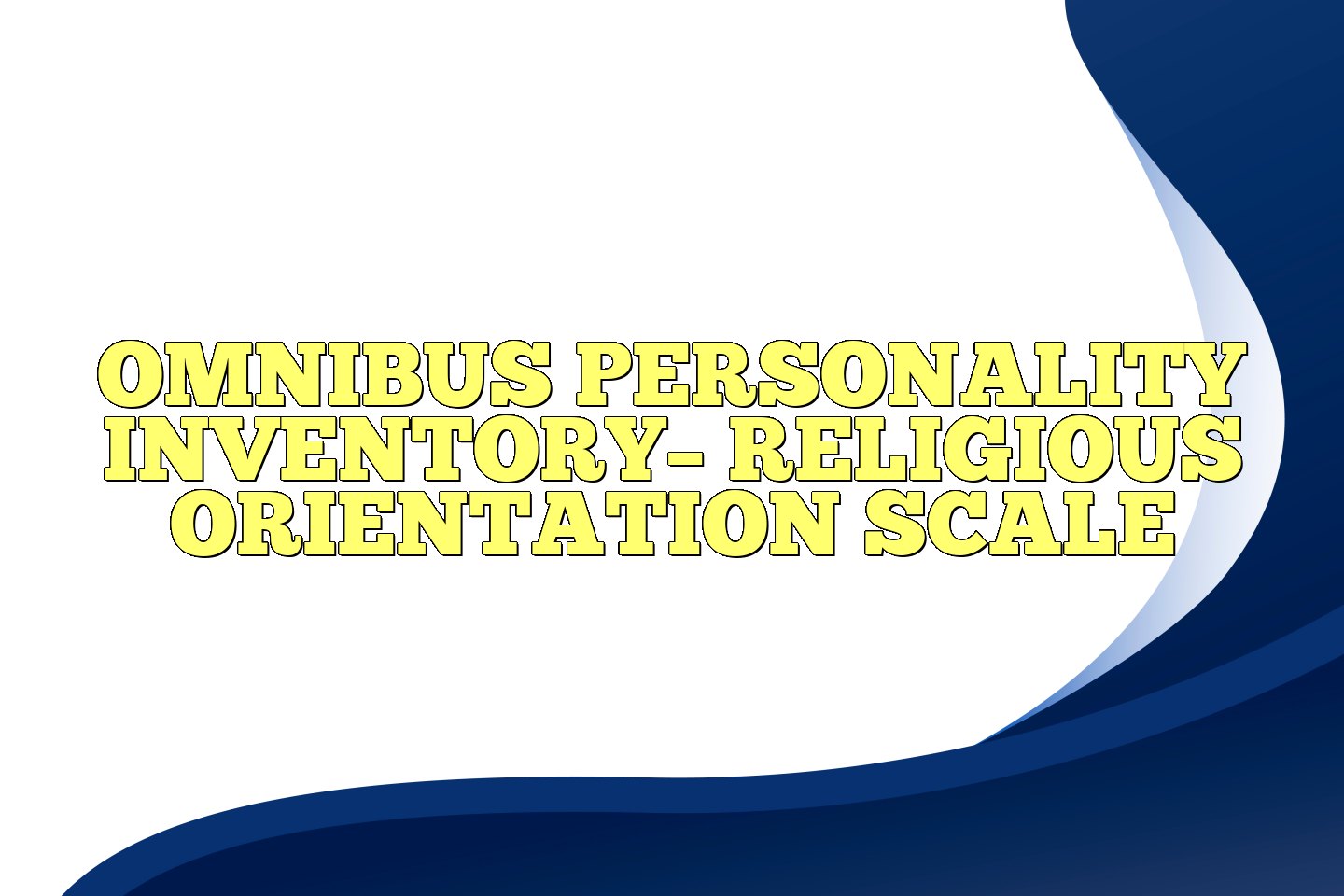 The Religious Orientation Scale (RO) is one of 14 scales that constitute the Omnibus Personality Inventory (OPI: Heist & Yonge, 1968). The RO measures individ­ual attitudes, opinions, and values with respect to religious belief and practice. The authors conceptualized religious orientation as a bipolar dimension with lib­eral versus fundamental religious commitment indicated by high versus low scores respectively (Heist & Yonge, 1968). High RO scores suggest a skeptical, rejecting at­titude toward conventional religious beliefs and practices, especially if they are ortho­ dox or fundamentalist (Dellas & Jernigan, 1990). Low RO scores suggest a strong commitment to Orthodox belief and prac­tice as well as more general conservatism and dogmatism. Such persons believe God exists and hears prayers, strongly pre­ fer to be with others who are religious, and never want to be considered skeptical or agnostic in religious matters (Heist & Yonge, 1968).

The OPI (Heist & Yonge, 1968) was developed to assess selected atti­tudes, values, and interests related to acade­mic activity and readiness among college students. Described by the authors as "eclectic," the OPI was not rooted in a particular personality theory and was intended primarily for use in educational research. Development of the OPI began with a pool of items borrowed from existing personality inventories. Rational-intuitive analysis re­duced the pool to the 385 items contained in the standard OPI form (Form F). Each item belongs to one or more of the 14 OPI scales. The Religious Orientation Scale (RO) (initially termed the "Religious Liberalism Scale"), consists of 26 true-false items de­ signed to assess religious beliefs and related attitudes as well as degree of commitment to fundamentalistic or dogmatic thinking (Heist & Yonge, 1968). The RO scale is highly correlated with the Autonomy Scale (Au), which measures personal autonomy and independence of thought. Together, these scales tap a dimension the authors de­ scribed as "freedom to learn" or more sim­ ply "authoritarianism versus nonauthoritari­anism" (Heist & Yonge, 1968).

One point is obtained for each item an­swered in the scored direction (see appen­ dix) resulting in a raw score range of O to 26 with high scores indicative of low religios­ity or liberalism and low scores indicative of high religiosity or conservatism. Norms are provided in the form of raw scores, whereas subsequent research has reported RO results as standard scores with a mean of 50 and standard deviation of 10. Heist and Yonge (l 968) offer a standard score conversion table in the OPI manual (p. 11).

Normative data regarding the OPI-RO is based on standard administration of the full OPI. Given the paucity of data regarding effects on the scale's psychometric properties, separate administration of the RO items is not rec­ ommended. The OPI is easy to administer to individuals and groups. The 385 true-false statements typically require 45 minutes to complete and there is no time limit.

OPI norms (Heist & Yonge, I 968) were based on a substantial sample of 7,283 college freshmen (3,540 men, 3,743 women) from 37 diverse col­ leges and universities across 14 states. The OPI was administered to all subjects in group format early their freshman year. In­ situations were selected to be representative of schools in various categories of higher education. RO scores ranged from O to 26 with a mean for this sample of I 1.8 (stan­dard score equivalent = 50) and a standard deviation of 6.2. The mean for men was 12.6 (SD= 6.2), while the mean for women was l l .1 (SD = 6.0).

Subsequent research indicates consistent differences between first and fourth year college students on the RO Scale. Across several samples, RO standard scores range from 39 to 46 during the freshman year and from 49 to 51 during the senior year (Baird, 1990; Chickering, 1974; Kuh, 1976). No other specialized norms are available for the RO Scale.

Heist and Yonge (1968) utilized two procedures to evaluate the reliability of the RO Scale. Internal consistency in the normative sample (N = 7283) was estab­lished with a Kuder-Richardson coefficient of .86. In a subsequent study with 400 col­lege freshman, a split-half Spearman Brown coefficient of .91 was reported. Test-retest reliability was reported for two samples. Among 67 female college students, the sta­bility coefficient was .92, while for a sam­ ple of 71 upper-class students, the coeffi­cient was .91. Both stability estimates were based on intervals of three to four weeks.

Heist and Yonge (l 968) attempted to ensure content validity of the RO Scale through careful item selection from existing instruments on the basis of congruence with the religious orientation construct. Subse­quent research has focused exclusively on establishing the RO Scale's concurrent and construct validity.

Several authors have established a corre­lation between education and RO scores, suggesting that during the college years, students evidence decreasing levels of reli­giosity and increased religious tolerance and autonomy. Chickering (1974) found that the mean RO score changed from 46 to 50 from freshman to senior year. Subsequent au­thors, utilizing both stratified sample and longitudinal designs have confirmed this re­lationship (Baird, 1990; Kuh, 1976; Lavin & Prull, 1989). Kuh (1976) and Baird (1990), using 5- and 20-year follow-up de­ signs, found significant increases in RO scores from freshman to senior year with ei­ ther no change or slight decrements in RO scores at follow-up.

Concurrent and construct validity has been further enhanced via correlations be­ tween the RO and religious behavior. Heist and Yonge (1968) found that among stu­ dents who reported attending religious ser­ vices more than once a week, the RO raw score was 4.9 versus 17.3 for students re­ porting such attendance once or twice per year. The RO was also positively correlated with verbal (.26) and mathematical (.27) performance on the SAT (Heist & Yonge, 1968), indicating a link between religious orientation and general achievement. The RO was not predictive, however, of psy­chology doctoral students' subsequent scholarly productivity (Tinsley, Tinsley, Boone, & Shim-Li, 1993).

Evaluating the RO's convergent validity, Heist and Yonge (1968) reported no signifi­cant correlation between the RO and the Ed­ wards Personal Preference Schedule or the Minnesota Multiphasic Personality Inven­tory. Strong positive correlations were re­ ported between the RO and the scales of in­tellectual quality, social undesirability, and creative personality from the Opinion, Atti­tude, and Interest Survey. Significant correla­tions between the RO and the California Per­sonality Inventory were reported for the social presence (.34), socialization (-.34), and achievement via independence (.31) scales. As expected, the RO was significantly correlated with the Study of Values-Reli­gious Scale (-.66), Theoretical Scale (.32), and Aesthetic Scale (.32). Finally, Heist and Yonge, (1968) found significant correlations between the RO and several Strong Voca­tional Interest Blank professions such as psy­chologist (.35), office worker (-.31), and banker (-.41). In a sample of 220 college stu­ dents, RO scale scores were found to be min­imally correlated with Social Desirability scores (Heist & Yonge, 1968).

OPI scale intercorrelations reported for the normative sample (Heist and Yonge, 1968) lend considerable support to the con­ struct validity of the RO scale. The RO was negatively correlated with the Practical Out­ look Scale (PO = -.40) and positively corre­lated with scales tapping autonomy (Au = .63), complexity of thought (CO = .46), thinking introversion (Tl = .32), and theo­retical/scientific interests (TO = .35). Factor analysis of the OPI has shown the RO scale loads significantly on Factor l (anti-intel­lectual authoritarianism, -.41) and Factor 8 (religious orientation, .88). This factor structure is confirmatory of the notion that low scores on the RO are indicative of prag­matic, utilitarian, and dogmatic qualities in belief and behavior. Further, the relationship of the RO to the OPI factor structure is sta­ble over time (Elton & Terry, 1969).

The OPI-RO scale has established moder­ate reliability and reasonable validity for the purpose of measuring religious liberalism versus religious conservatism among late adolescent and young adult samples in edu­cational research. Nonetheless, the scale's utility is compromised by a restricted defini­tion of religiousness as rigid, dogmatic, and indicative of authoritarianism. The dichoto­mous nature of the items creates a false po­larity between religious (rigid) and nonreligious (flexible). Rather than serving as a useful measure of religiousness or religious belief, the real value of this RO scale for the scientific study of religion may be its useful­ ness in tapping cognitive style (flexibility) as it relates to religious belief.

*Note: the ROS is best administered in the context of the OPI, not as an independent scale.

Chickering, A. W. ( 1974). The impact of various college environments on personality development. Journal of the American College Health Associa­tion, 23, 82-93.