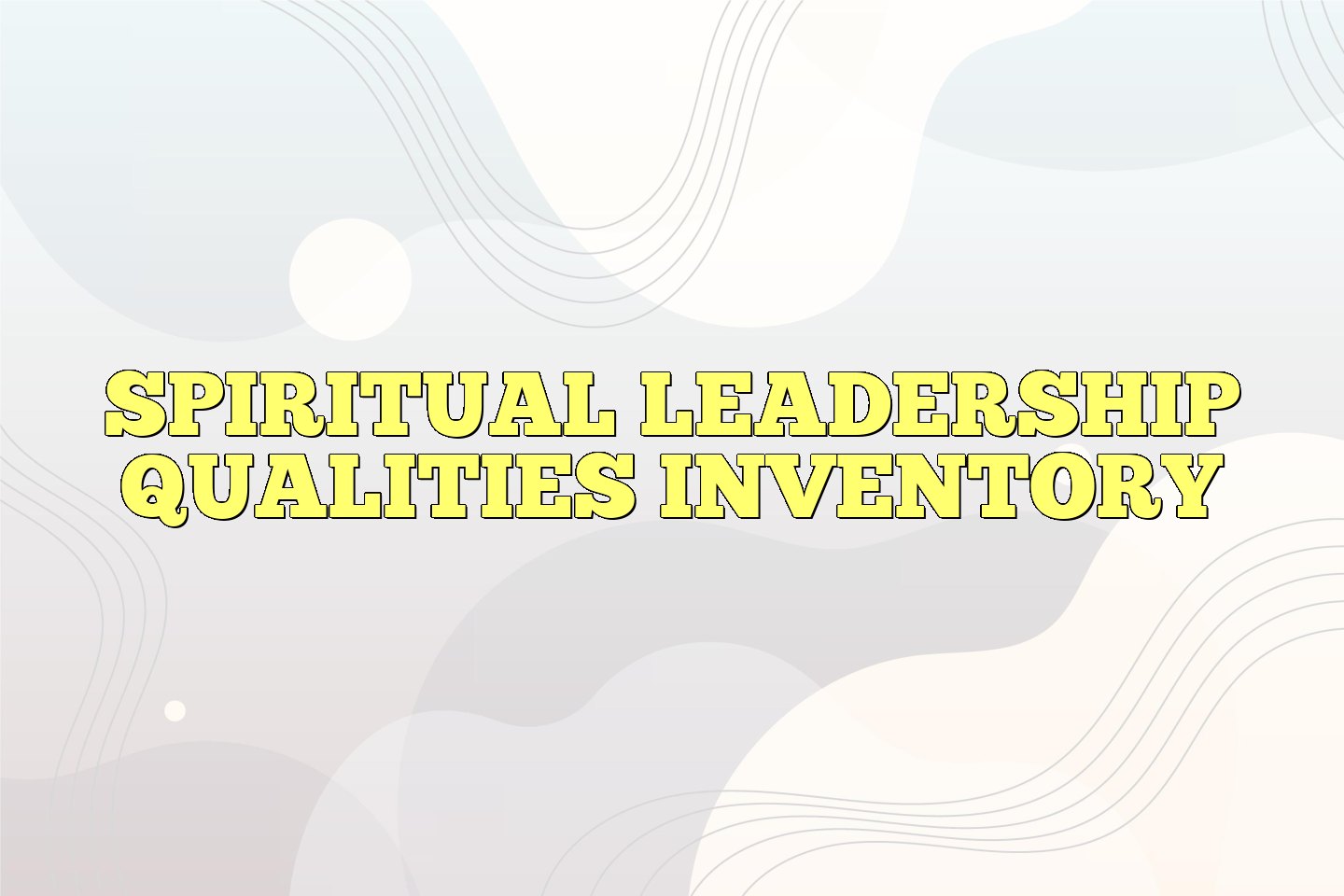 The Spiritual Leadership Quali­ties Inventory (SLQI) was designed to re­flect "the characteristics and qualities of spiritual maturity described by Paul in I Timothy 3:1-7 and Titus 1:5-9" (Townsend & Wichern, 1984, p. 306). The authors as­sert that in these passages the apostle Paul sets forth an outline of the spiritual charac­ter qualifications for elders (leaders) of the church. Their exegesis identifies, a total of 22 distinct traits or qualities. Of these, the SLQI measures 19 qualities.

The instrument's theory base assumes that the beliefs and behaviors of leaders in Christian evangelical churches are on a spir­itual level measurably higher than those of the population at large. Although other in­struments are available and are used for measuring attitudes and interests of reli­giously oriented people, broad spiritual ma­turity levels, or leadership abilities, those instruments deal with a wide range of thoughts, feelings, and values. They tend to be normed primarily for ministers or semi­narians, or they have no explicit biblical basis for determining levels of spiritual ma­turity. Thus this inventory of spiritual lead­ership qualities was developed to be applic­able not only for clergy but also for laity. A hallmark is the explicit and specific biblical content as the basis for both trait and item development. This assumption is that an in­ dividual who has a marked degree of these "biblically-derived" qualities of spiritual maturity could be considered for spiritual leadership. This instrument's purpose, then, is to "help an individual recognize areas of spiritual and psychological growth," rather than to "be a diagnostic instrument of over­ all spiritual maturity" (Townsend and Wich­ern, 1984, p. 306). This distinction, how­ ever, is not entirely clear.

The SLQI contains 222 items identifying 19 traits of spiritual maturity. A thorough exegetical study of the Timothy and Titus passages resulted in the following traits: being upright, having a good reputa­tion, being above reproach, being re­spectable, having a desire to be overseer, being holy, having an ability to teach, being temperate, being prudent, being able to manage family, being the husband of one wife, being gentle, not being quick-tem­pered, being self-controlled, not being ad­dicted to wine, not being greedy, being a lover of good, not being self-willed, and being hospitable. Specific scriptural pas­ sages, Greek words, and principles of exe­gesis are detailed in Appendix A of the In­struction Manual (Wichern, 1980).

The spiritual traits were logically derived to confirm or disconfirm the presence of those traits in a person's daily behavior. Means and standard deviations of pastors, elders, seminary students, and non-Chris­ tians are reported in Wichem's (1980) Man­ual, providing a general frame of reference for interpretation.

The SLQI pro­ vides a 22-page Instruction Manual, which explains the instrument's purpose and his­torical development, contains directions for administration, and offers interpretation guidelines. The Manual has two sample case studies to clarify the use of the SLQI in in­terpretation. Appendix D provides helpful and simple action plans for developing each of the leadership qualities measured by this instrument. The inventory may be com­pleted in about 50 minutes.

The scoring key is a single transparent overlay with seven columns, one for each page. Scoring is straightforward for anyone familiar with hand-scoring procedures. The two-sided SLQI Scoring Record explains the four-step procedure. Raw scores from one side of the Scoring Record are plotted on the Analysis Profile on the reverse side.

The Analysis Pro­ file is a graph of an individual's scores. Shaded portions of the profile indicate "new believer," "normal Christian," and "spiritu­ally mature." The distinctions are based on the mean score for all populations.

The Manual reminds the user that the usefulness of test results is directly related to the skillfulness of the administrator. Scores can be analyzed in one of three ways: as individual traits, as general trends, or as reflections of certain social attitudes and behaviors. No explanation is offered for using these levels of analysis. At several points in the Manual, users are reminded that the SLQI is not to be used as the sole basis for any administrative decision as to one's qualification for leadership. The in­strument may be combined with an educa­tional and small group process, thereby pro­ viding informal feedback for the spiritual strengths and weaknesses of potential lead­ers.

Support of the SLQI's reliability is reported both in the Manual and in the follow-up study by Townsend and Wichern (1984). Test-retest correlations are reported from l00 Christians randomly selected to take the SLQI twice. The interval between administrations was eight weeks. The coef­ficient values for the 19 traits ranged from .30 to .63, with an overall reliability of .94. All correlations were significant at the .05 level.

The SLQI Manual asserts that "nu­merous personal interviews and surveys have confirmed that the SLQI accurately as­sesses the traits it measures. In addition, several studies have shown that the SLQI discriminates between church leader and non-church leader populations" (Wichern, 1980, p. 6). Aside from these assertions, no other citations provide actual empirical data to evaluate the instrument's validity for its intended purpose. However, Townsend and Wichern (1984) cite several studies that demonstrate acceptable convergent and di­vergent validity for each scale (Ewing, Parker, & Quinn, 1983). Campbell, Carr, and Parker (1983) performed a factoranaly­ sis of the SLQI, resulting in a five-factor so­lution accounting for 70% of the variance. Parker (l 984), and later Carr (l 987), explored construct validity again using a principle components factor analysis and pro­duced a feasible five-factor explanation and a two-to-six factor solution, respectively. Unfortunately, a large percentage of the total variance was attributed to one factor, further questioning the theoretical analysis and item pool of Wichern's original study.

Townsend and Wichern (1984) attempted a comparison validation study of the origi­nal data, using 71 adults from the Dallas, Texas, area. Their sample included 22 el­ders, 22 deacons, and 27 non-Christians, ranging in age from 18-65. Comparisons among these known groups were analyzed using t-tests. On none of the I 9 traits was the non-Christian group higher than the church-leader group in total scores. Several significant differences were found on indi­vidual traits, including "gentle" and "not self-willed" (the elders were higher than deacons in both groups). In general, the SLQI did not effectively distinguish be­ tween these two leadership groups, although they distinguished the leadership groups from the non-Christian group.

The correlational results are mixed. There were high intercorrelations among the 19 trait variables, indicating high internal consistency. These results also evidence sig­nificant overlap in these scales, demonstrat­ing lack of discrimination of these character qualities. Rockwood (1986) reported a sig­nificant relationship between the spiritual development traits of the SLQI and the psy­chological maturity scores yielded on the Personal Authority in the Family System Questionnaire, an instrument based on fam­ ily of origin theory. Rockwood found a sig­nificant difference between age-group scores on both instruments, lending some credence to the SLQI's ability to distinguish leadership qualities in younger versus older participants.

Based on these findings and on the short­ age of current validity studies for this in­strument, most researchers suggest further development focusing on reexamining the exegesis of the passages and the items drawn from them. The instrument as a whole seems to have promise, but individual scales may not make the sensitive dis­ criminations the author expected. The avail­ able findings suggest the viability of dis­ criminating spiritual leadership qualities from nonleadership qualities, but the length of the SLQI might be discouraging for re­ searchers when briefer instruments measure similar constructs (Bassett et al., 1991). Thus, caution is warranted in using this as a pure clinical instrument for determining roles within a fellowship, but it might be used effectively as an educational and dis­cussion tool for developing spiritual leader­ ship qualities, assuming that any feedback given is tentative.

This survey is one way of describing human beings in terms of their beliefs, attitudes, and val­ ues. The survey consists of numbered statements. Read each statement and decide whether it is true as applied to you or false as applied to you.

Remember to give your own opinion of yourself. Do not leave any blank spaces if you can avoid it. Be sure to let your responses reflect how you feel at the present time.

Greene, M. P. (1987). The relationship between faculty-led small groups and character development of seminarians in an evangelical seminary (Doc­ tpral dissertation, University of North Texas, I987). Dissertation Abstracts International, 48-04, 0890A.