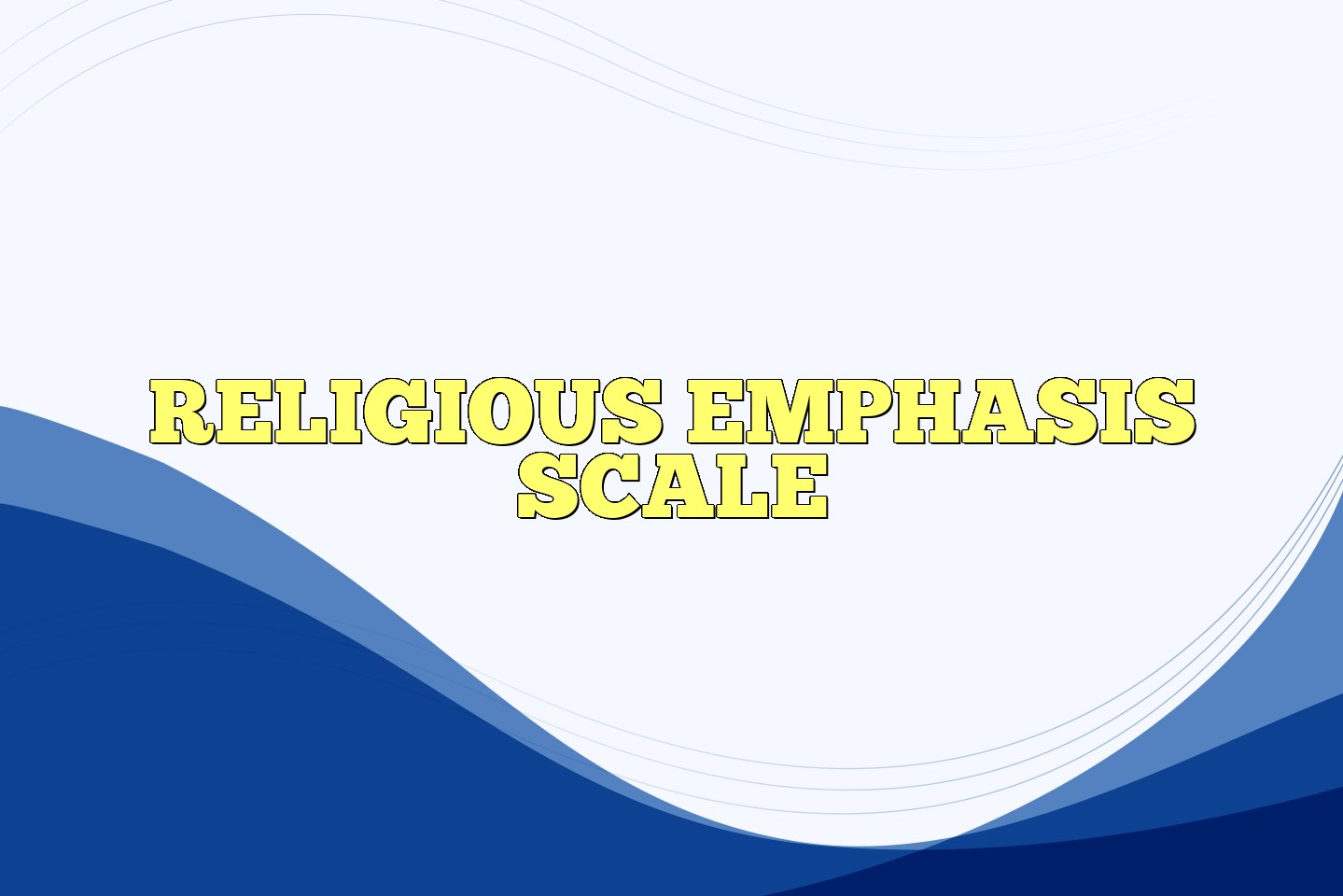 The Religious Emphasis Scale (RES) measures the extent to which one's parents emphasized the family religion as one was growing up. The scale was origi­nally developed and reported by Altemeyer (1981) and later slightly revised (Altemeyer, 1988). The revised form is discussed here. The RES was developed in the context of Altemeyer's (1981, 1988) work on right-wing authoritarianism and its link with religion.

Respondents are asked to indi­ cate the extent to which their parent sempha­sized religion while they were growing up, using a 6-point response format. Response alternatives included O (none at all), l (only a little bit), 2 (a mild amount), 3 (a moderate amount), 4 (quite a bit), and 5 (a great deal). The total scale score is determined by a sum­mation of the IO item scores.

This paper-and­ pencil measure is relatively straightforward to use, requiring no special examiner skill to administer, score, or interpret. The test has been used both with university students and their parents in Canada. It appears to be suitable for adolescent through adult sam­ples in similar cultures.

Two primary sam­ples were used in Altemeyer's (1988) work with this scale. Five hundred and thirteen introductory psychology students completed the scale as part of a course research bonus credit system. Also, 549 parents of these students responded to the scale, which was part of a questionnaire package sent and re­ turned by regular mail. Average scores on the scale were 17.7 for the students and 25.0 for the parents; variance was 161 and 186 respectively.

The average interitem correla­tion for these 10 items was .55, with a re­sulting Cronbach 's alpha of .92, identical for both the university student sample and their parents.

Altemeyer (1988) provides docu­ mentation regarding correlations between the Religious Emphasis Scale and other measures of religion and authoritarianism. These relationships are in the expected di­rections. For example, correlations between Religious Emphasis and other measures de­veloped by Altemeyer (1988), for the student and parent samples respectively, were Right­ Wing Authoritarianism (.37, .30), Religious Doubts (-.30, -.23), and Religious Pressures (.59, .43). Comparable correlations for other scales included Fullerton and Hunsberger's (1982) Christian Orthodoxy Scale (.59, .49), and Allport and Ross' (1967) Intrinsic Reli­gious Orientation (.58, .50) and Extrinsic Religious Orientation (-.20, -.15) Scales.

The correlations with a single-item measure of church attendance were .62 and .44 for the two groups respectively.

Further, in earlier work with this scale (Altemeyer, 1981), students' and parents' ac­ counts of the emphasis placed on religion in the home correlated .70 and .73 in two stud­ies. That is, students' accounts of the reli­gious circumstances of their youth were corroborated by their parents. There was also a reasonably strong relationship (.48 to .53) between Religious Emphasis scores and the extent to which students still reported ac­cepting the teachings of the home religion.

After naming the particular religion in which they had been raised, participants are asked to respond to the following items, on a 0-5 basis, to indicate "how much their parents empha­sized practicing the family religion while they were growing up" (Altemeyer, 1988, p. 205).

Altemeyer has con­tinued to develop this scale, and a 16-item version was recently used (Hunsberger & Altemeyer, 1995) in research on apostates, again revealing strong psychometric proper­ ties. Cronbach's alpha for the 16-item ver­sion was .95 and .96 in two samples of more than 800 university students each.