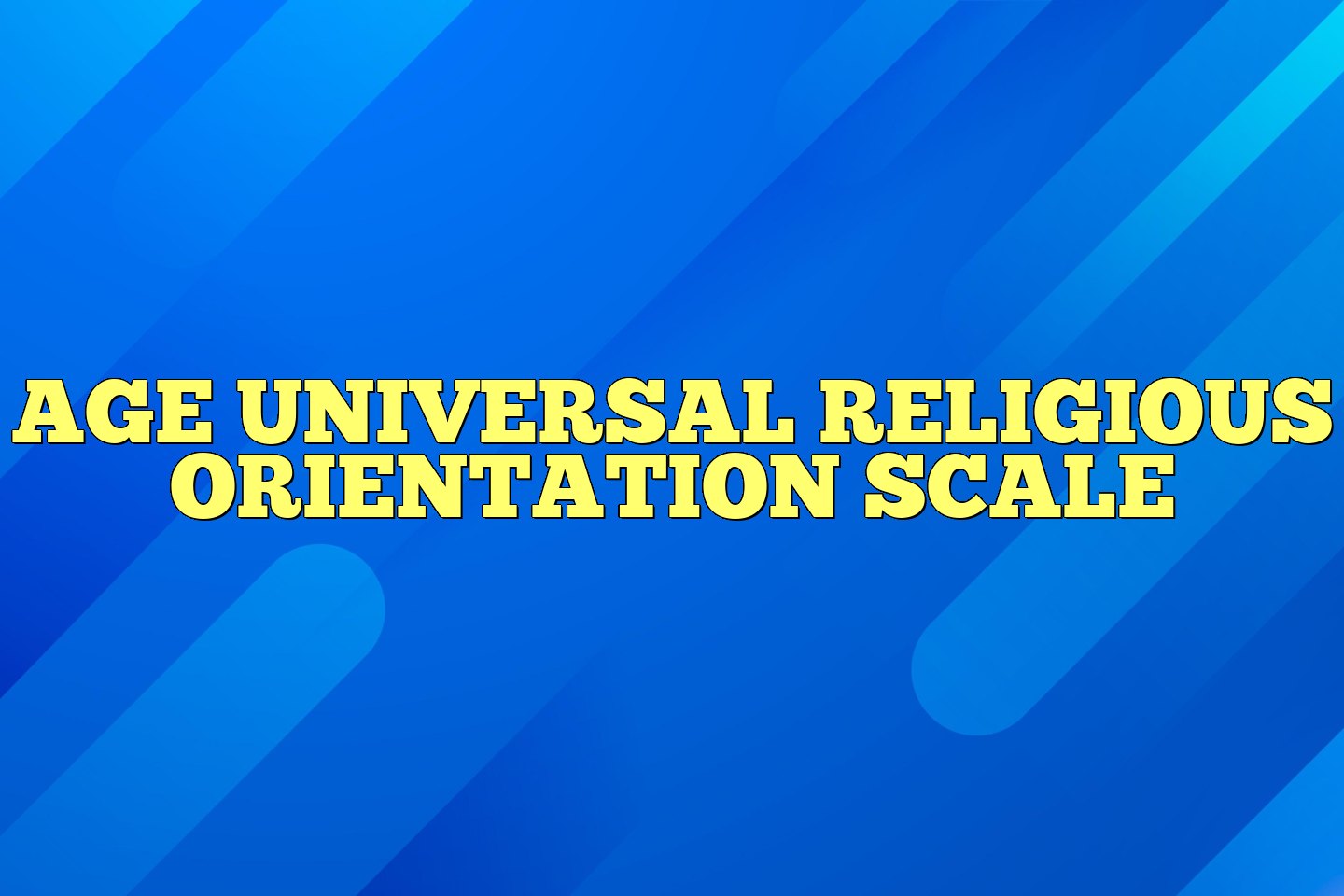 sic (I) and an extrinsic (E) orientation. But, Nineteen of the 20 items are scored on as the name suggests, this scale is useful for the same 5-point Likert continuum scale, both adults and children. Since its publica- with 1 indicating strong disagreement and 5 tion in I 983, the scale has been revised indicating strong agreement with each state- based on further psychometric evaluation. The other item, part of the I subscale, (see Gorsuch & McPherson this volume). measures the frequency of church attendance

This scale is a modified verdance, also on a 5-point Likert continuumsion of the Allport and Ross (1967) 1-E Re- where 1 indicates "a few times a year or ligious Orientation scale where each item is less" and 5 indicates "more than once a a rewritten version of the original. It is com- week."

Ross scale. Whereas the original scale retinoic and the 11 extrinsic items should be quires language ability beyond that of the scored separately, since they apparently reflet independent dimensions rather than two unipolar constructs (see the discussion under "Results and comments" on the 1-E Religious Orientation Scale of Allport and Ross, 1967). The score of each subscale is determined by summing the scores of the 9 or 11 items, thus providing ranges of 9 to 45 for the I measure and 11 to 55 for the E measure.

This paper-and­ pencil measure requires no special exam­iner skill to administer, score, or interpret. No instructions are provided, nor are they necessary beyond the usual guarantee of confidentiality and the emphasis on no "right" or "wrong" answers as an attempt to diffuse a socially desirable response ten­dency. The purpose of the test is clear: to measure I and E religious orientations in a fashion suitable for both children and adults. Face validity of the scale is high in that items are clearly related to either the I or the E orientation.

Two primary sam­ples were used. The first sample consisted of 101 "adult Protestant Christian volunteers" from six churches and a college dor­mitory. Adults were necessary to correlate the Allport and Ross items with the rewrit­ten items of the Age Universal Scale. In some cases there were multiple rewritten items with the highest correlating item (to the corresponding Allport and Ross item) selected.

The second sample consisted of 138 fifth and 119 seventh graders of various levels of verbal comprehension, as measured by the Altus (1948) Information Inventory. The au­thors maintained that children at a given grade level with lower verbal abilities should respond with equal reliability as those with higher verbal abilities if the scale claims to be useful at that particular grade level. As noted later, a precaution is neces­sary with children below the seventh grade who score low on measures of verbal com­ prehension.

With the first sample of adult Protestant volunteers, internal consistency reliability coefficients were .66 for the E subscale and .73 for the I subscale. These coefficients compare with .70 and .73 re­spectively with the same subjects on the Allport and Ross (1967) scale. Individual item-to-subscale correlations were not re­ ported. The correlation between I and E subscales was -.39. Among the 230 fifth­ and seventh-grade students (after 27 stu­ dents with scores of O or I on the Informa­ tion Inventory were dropped; see discussion under "validity") in the follow-up study, the alpha coefficients were .75 for E and .68 for The 1-E correlation in the follow-up study was -.28.

In the follow-up study reported in the same article, Gorsuch and Venable (1983) included a measure of verbal ability called the Information Inventory (Altus, 1948) as a check on the properties of the Age Univer­sal Scale with fifth- and seventh-grade chil­dren of varying verbal abilities. Using mul­tiple regression, the authors concluded that the Age Universal Scale was appropriate for all but those with the lower verbal abilities below the seventh grade. For a sample of in­dividuals below the seventh grade, they rec­ommended including the Information Inven­tory (which can be group administered in less than five minutes) and exclude those children with abilities at the two lowest lev­els from a range of nine levels.

The following items are included in the Age Universal Religious Orientation Scale. Items were administered in the (random) order listed and were all scored (except the sixth item) on the same 5-point Likert continuum:

Nelson, P. B. ( 1989). Ethnic differences in in­trinsic/extrinsic religious orientation and depres­sion in the elderly. Archives of Psychiatric Nursing, 3, 199-204.