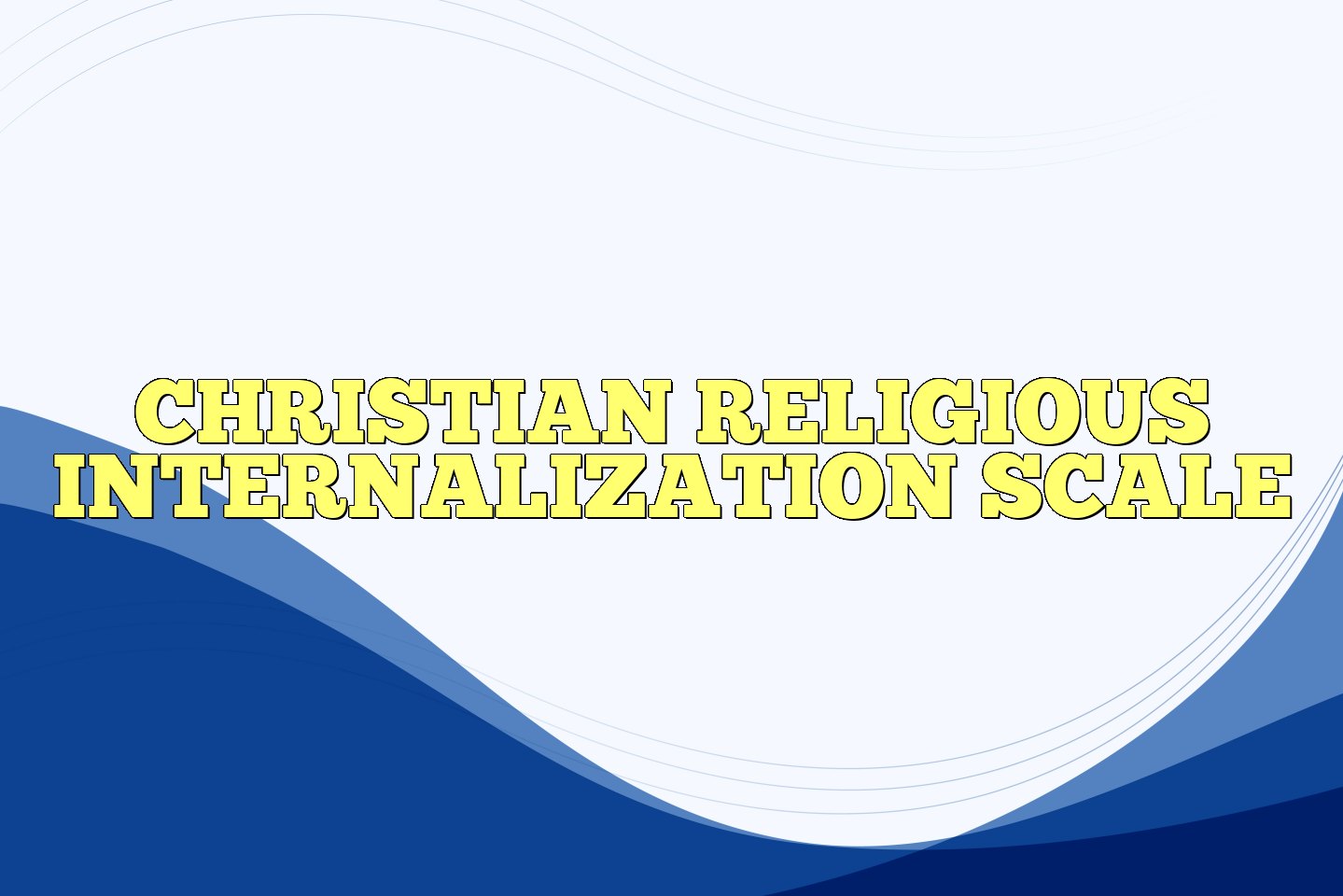 The Christian Religious Internal- Description: The CRIS is a 12-item meaization Scale (CRIS) assesses the degree of sure designed to identify an individual's internalization for Christian beliefs and style of religious orientation. Preliminary practices based on self-determination the­ory. Internalization refers to the process through which an individual transforms an externally prescribed regulation or value into an internal one. In other words, in inter­nalization one "takes on" the value or regu­lation as one's own. Theories of internaliza­tion acknowledge that there can be varied degrees of internalization. Ryan et al. (1993) identify introjection and identifica­tion as two types of religious internalization.

Introjection represents a form of internal­ization in which beliefs and practices are maintained through contingent self-ap­proval, guilt, and esteem-related activities. Thus, introjected behaviors are performed because one "should" do them or because not doing so may result in anxiety, guilt, or loss of esteem. Identification, on the other hand, represents a more fully internalized regulation in that the individual experiences behavior as volitional or self-determined. Beliefs and practices associated with identi­fication are experienced as a personal value and the individual perceives them as ema­nating from himself or herself to a greater extent than in introjection. Given the nature of the distinction between the two types of internalization, Ryan et al. (1993) expect di­vergent and largely opposing relations to adjustment and mental health, with identifi­cation associated with more positive out­ comes and introjection with more negative outcomes. Thus, the intent of the CRIS is twofold: (a) to assess an individual's type of religious orientation and (b) to examine how variations in introjection and identification are associated with well-being, mental health, and other established measures of re­ligious orientation.

versions of the CRIS included a 36-item pool that was administered to two large samples of Christian subjects for the pur­pose of factor and internal consistency analysis. These preliminary studies indi­cated a reliable two-factor structure and the possibility of creating a brief version consisting of the 12 items constituting the CRIS. Factor analysis with varimax rotation of the CRIS consistently yielded two factors corresponding to the two types of internal­ization identified as introjection (eigenvalue= 3.00, 3.49, 3.50 across three samples of Christian subjects) and identification (eigenvalue = 2.20, 2.47, 2.80 across the three samples).

In scoring the CRIS, each item receives a score of 1-4 and subjects are directed to cir­cle the response that best describes them­ selves. To distinguish religious orientation from general motivation, respondents indi­ cate the degree to which various motives would be salient to them if they were to per­ form a religious behavior. No items are neg­atively worded and two subscale scores are created for each subject representing the mean of the six items loading on each fac­ tor. No significant correlation was found be­ tween the introjection and identification subscales (r = .07). Likewise, gender differ­ences in subscale scores were examined and no significant differences on either subscale were detected.

This paper-and­ pencil measure requires no special skills to administer, score, or interpret. No instruc­tions are provided, and none are necessary beyond the usual guarantee of confidential­ity and the emphasis on no "right" or "wrong" answers. Face validity of the CRIS is high in that items clearly reflect one ori­entation or the other.

The CRIS was sampled against four groups of Christian subjects. As indicated by Ryan et al. (1993), Christian (i.e., Catholic and varied Protes­tant) denominations were used because (a) they were readily available, (b) they have been the focus of past research on religious orientation with which comparisons can be drawn, and (c) pilot survey and interview studies suggested that both introjection and identification are common forms of motiva­tion underlying Christian practices. As the title Christian Religious Internalization Scale suggests, generalizability remains limited to Christians until efforts are made to investigate how the CRIS functions among non-Christian religions.

The first sample consisted of 105 under­ graduates (31 men and 74 women) at a sec­ular university who identified themselves as Christian. The mean age of these partici­pants was 20.5. The second sample con­sisted of 151 undergraduates (47 men and 104 women) from a Protestant college (n = 84) and a Catholic university (n = 67). The mean age of these participants was 22.5. The third sample consisted of 41 subjects drawn from an adult Sunday school class at a suburban Protestant church. The mean age of these adults was 35. The fourth sample consisted of 333 male (149) and female (184) participants in a summer evangelical project in New York City. Their mean age was 17.5. Denominationally, 47% classified themselves as Baptists, 27% claimed non­ denominational status, and the remainder reported other denominational affiliation. Both evangelical (sample 4) and less behav­iorally engaged Christian subjects from a secular setting (sample 1) were utilized for comparison purposes in testing for differ­ences in introjection and identification. Sub­ jects in all four samples participated on a volunteer basis and were assured of the con­fidentiality of their responses.

With the first sample of self­ identified Christian students from a secular university, factor analysis yielded two fac­ tors, representing introjection and identifi­cation, and accounted for 23.3% and 29.1% of the explained variance, respectively. Loadings (representing the correlation be­ tween each item and the factor extracted) ranged from .73 to .52 for introjection and from .84 to .57 for identification. Internal consistency reliability estimates found that in this sample both subscales had alpha coefficients of .82, indicating adequate inter­nal reliability.

Factor analysis results from the second sample were similar to those obtained in the first sample, with six items falling on each of the two factors representing introjection and identification. Introjection accounted for 20.5% of the explained variance and loadings ranged from .72 to .61. Identifica­tion accounted for 29.1 of the variance with loadings ranging from .84 to .57. Alpha coefficients were .82 and .69, respectively.

Insufficient sample size prevented factor analysis from being performed on the third sample of Protestant adults. However, in­ dices of internal consistency for introjection and identification suggest adequate reliabil­ity (a.= .64 and .79, respectively).

Hypothesized group differences and correlations were used to assess the construct validity of the CRIS. In a case of "known groups" validity, Ryan et al. (1993) predicted and analyses supported a signifi­cant difference in religious internalization between subjects who had volunteered to engage in evangelical work and less behav­iorally involved subjects at a secular univer­sity. More specifically, analyses of variance revealed that evangelical youths scored higher on both the introjection and identifi­cation subscales of the CRIS than the com­ parable sample drawn from a secular envi­ronment (p < .001). Total score means on introjection were 11.13 (SD = 3.56) and 13.88 (SD = 2.88) for secular college Chris­ tians and their matches from the evangelical sample, respectively. Corresponding means for identification were 17.88 (SD = 3.96) and 22.42 (SD = 1.81). In demonstrating the ability of the CRIS to discriminate between groups where one might logically predict differences in degree of religious internalization, these results assist in establishing construct validity.

Convergent and discriminant construct va­lidity were supported in a series of predicted correlations between the CRIS and other measures of religious internalization. Corre­lational studies in three Christian samples provide evidence that identification is closely associated with Allport and Ross's (1967) di­mension of intrinsic religiosity (correlations ranged from .33 to .77) and with what Batson and Ventis (1982) called the Religion as an End orientation (correlations ranged from .22 to .78). Moderate correlations between intro­jection and extrinsic religiosity and Religion as a Means orientation (correlations ranged from .10 to .31 and .17 to .40, respectively) suggest that the introjection subscale of the CRIS measures something more specific than either of these constructs. Batson and Ven­tis's Religious as a Quest orientation was un­ related to either type of internalization. Both identification and introjection were generally associated with greater church attendance and the Doctrinal Orthodoxy Scale (Batson, 1976), though this was particularly true of identification.

The following items are included in the Christian Religious Internalization Scale. All items are scored on the same 4-point Likert continuum:

One reason I actively share my faith with others is:

Because I would feel bad about myself if I didn't. Because I want other Christians to approve of me.

When I turn to God, I most often do it because:

A reason I pray by myself is:

A reason I attend church is:

Note: A longer version of the scale is available from Richard Ryan, Dept. of Psychology, University of Rochester, Rochester, NY 14627---0001.

No subsequent re­searchy using the scale has been published.