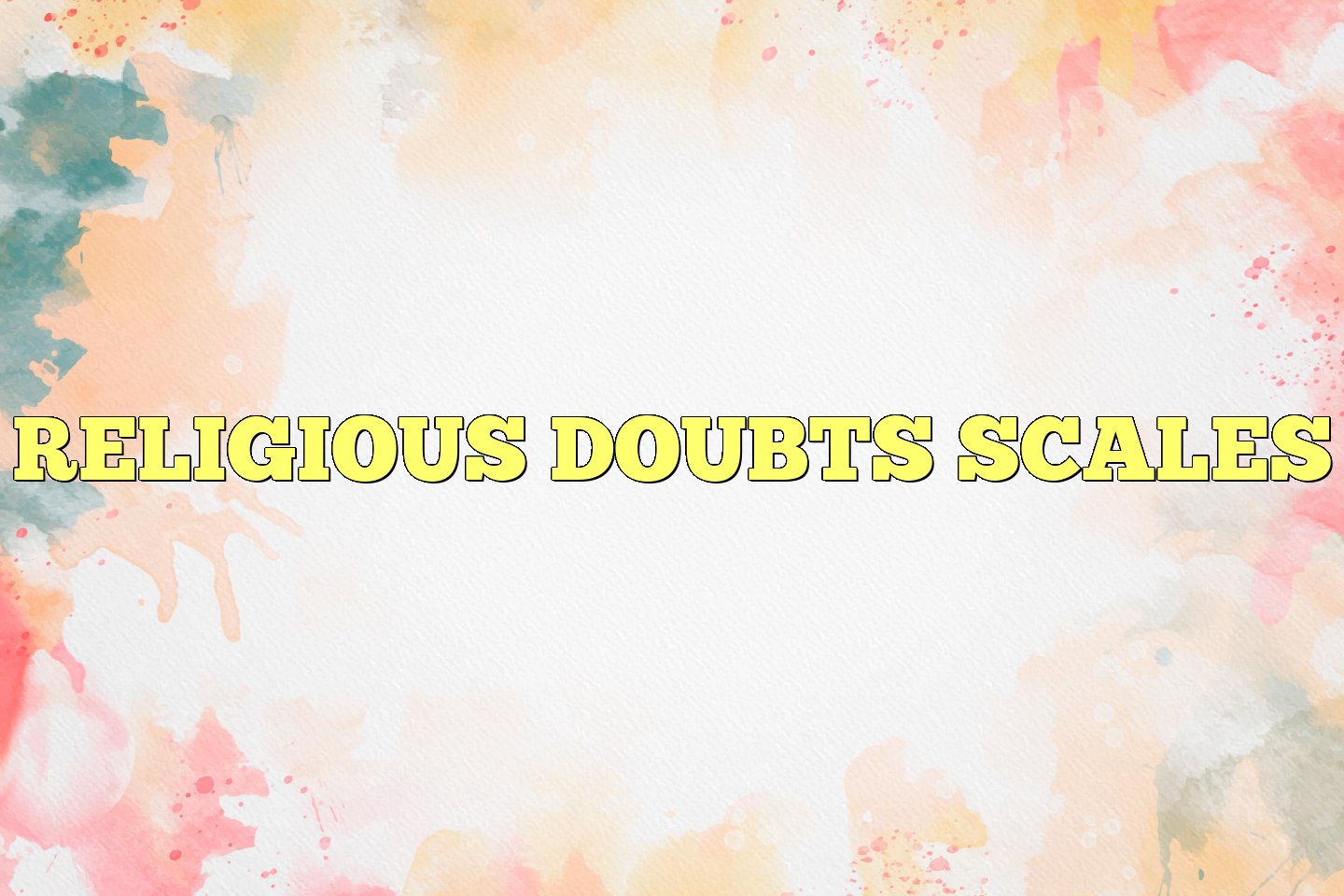 The Religious Doubts (RD) Scale is de­ signed to measure the degree to which peo­ple experience doubts about traditional reli­gious teaching. The scale is composed of ten items. Each item is answered on a six­ point scale that asks the subject to indicate the extent to which he or she has had such doubts. The answer options range from 0 (none at all) to 5 (a great deal). The total score is simply the sum of the answers to the 10 items. The statements are designed to assess both intellectual and experience­ based hesitations about religious belief and commitment.

In a sample of over 500 University of Manitoba psychology students and a simi­lar-sized sample of their parents, the aver­ age interitem correlations were .32 and .36, respectively. The internal consistency relia­bility coefficients were .84 for the students and .86 for their parents. The mean of the single-item scores for the students was 1.89 (scale mean= 18.9); the mean for their parents was 1.45 (scale mean = 14.5). As would be expected on theoretical grounds, RD scores correlated negatively with belief in Christian orthodoxy, intrinsic religious orientation, church attendance, frequency of prayer, loyalty to beliefs ac­ quired during childhood, belief in a final judgment, control of impulses, obedience to authority, and a belief in Satan. RD scores correlated positively with extrinsic reli­gious orientation and the importance of being good over holding beliefs. These trends occurred in both the parents' and stu­ dents' samples.

The interitem correlations, internal con­sistency reliability coefficients, and pattern of relationships attained with other mea­ sures suggest that the Religious Doubts Scale has good statistical properties and shows promise for use in subsequent re­ search. It has recently been replaced by a 20-item version (Altemeyer & Hunsberger, 1997) that asks respondents to indicate both

Appendix A The Religious Doubts Scale

Below are listed reasons that people sometimes give for doubting traditional religious teach­ings. Please indicate the extent to which you have had these doubts.

Philosophical discussion and life experience suggest to us that there may be a variety of root causes of religious doubt. For example, one person may doubt because of apparent conflicts between religion and science, while another may doubt as a response to personal tragedy.

In order to assess the degree to which var­ious sources of doubt are germane to a particular case, Hunsberger, McKenzie, Pratt, and Pancer (1993) wrote a set of short vignettes, each of which is intended to be sensitive to a different reason for doubting. Ten vignettes were prepared. The subject was instructed to read each one and then answer the following question: "How much religious doubt does this type of issue arouse for you?" Response alternatives could range from O (no doubt at all) to 10 (a great deal of doubt).

The ten vignettes assessed doubt rooted in the following causes: science versus religion controversy, a specific event such as the death of a close friend, truth claims of other religions, challenges to traditional teachings by scholars of religion, violation of self-in­terest such as unanswered prayer, shortcom­ings of organized religion, the idea that God may be a mere human projection, the failure of religious claims such as faith healing, and the perception that there is no need for God in attempts to explain the universe.

childhood; the remammg 2 correlations were almost 0. The correlations between the scores for all vignettes and present and past church attendance were negative. These trends also held for the total vignette score.

These findings suggest that this method­ ology for measuring doubt, particularly its ability to pinpoint the particular source of that doubt, has potential for future research.

The above two ways of measuring doubt en­able us to assess those hesitancies about reli­gion that people can easily admit. But some people may have secret doubts about what they have been taught that they have never shared with another person. These would nat­urally be difficult to access, but Altemeyer (1988, pp. 152-153) developed a clever methodology for getting a glimpse of them.

Over 400 students in his general psychol­ogy course had learned about the "Hidden Observer" phenomenon in hypnosis re­ search. The Hidden Observer is a technique used in hypnosis research to see if subjects will reveal experiences that the hypnotist has told them do not exist. For example, your arm may be submerged in a bucket of ice water, which ought to feel very painful, but your hypnotized self feels no conscious pain (due to hypnotic suggestion to feel no pain). However, the Hidden Observer is aware that it hurts and can admit such if

asked. With this knowledge about the "Hid­ den Observer" phenomenon as a back­ ground, the students were later given the in­structions contained in Appendix C.

Of the 200 subjects for whom Altemeyer reports data, 101 high (top quartile) and 99 low (bottom quartile) in right-wing authori­tarianism, one fourth (50) of them said that the Hidden Observer indicated "secret doubts that s/he had kept strictly to her/himself." The high authoritarians are more likely to firmly adhere to conservative religious be­liefs. Yet for them, the Hidden Observer ex­ pressed secret doubts, ones that had never been shared with another person, at a rate of approximately one third. This method can be adapted in order to explore feelings, opin­ions, or tendencies that a person or group may not be inclined to openly discuss.

You may recall the lecture on hypnosis dealing with Hilgard's research on the "Hidden Ob­ server." Suppose there is a Hidden Observer in you, which knows your every thought and deed, but which only speaks when it is safe to do so, and when directly spoken to. This question is for your Hidden Observer: Does this person (that is, you) have doubts that (s)he was created by an Almighty God who will judge each person and take some into heaven for eternity while casting others into hell forever?

Choose one of the following answers: