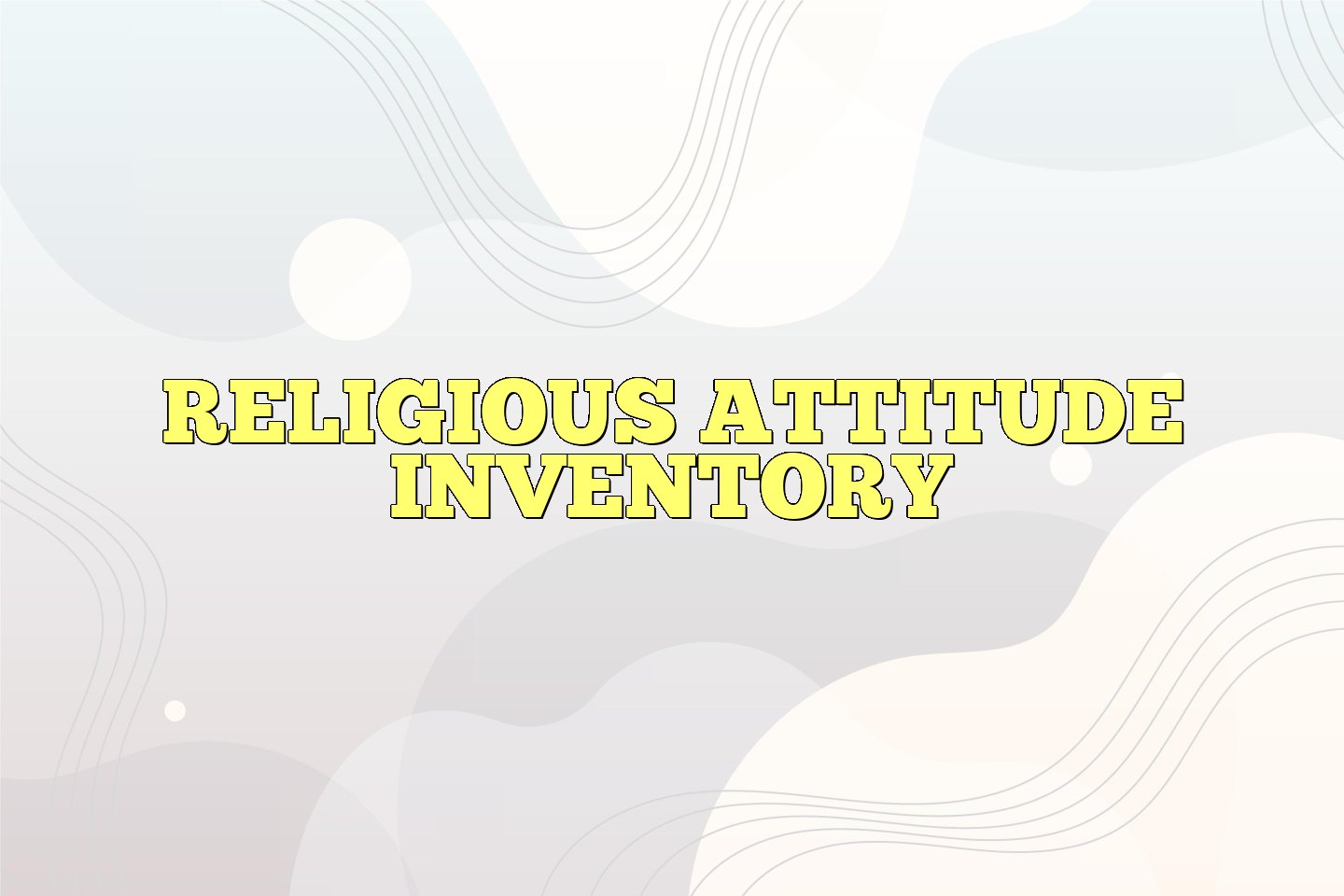 The Religious Attitude Scale was designed to measure British university stu­ dents' attitudes toward the Christian reli­gion. It assesses the degree of agreement with a series of statements regarding general tenets of Christianity, as well as the neces­sity of religion for life well-being and moral development. Results are set on a contin­uum from an overall positive to an overall negative attitude toward religion.

Although the present scale was created specifically to look at the religious attitudes of students at a British university, the authors also aimed to create a measure that could be used in other research on reli­gious attitudes. At the time of its develop­ment, other tools existed for assessing simi­ lar constructs, such as attitudes toward the church and God (Thurstone & Chave, 1929), social attitudes (Eysenck, 1947), and religious beliefs (Brown & Lowe, 1951). However, none were adequate for the authors' purpose. Previous scales were di­rected toward a more general population, used only with American students, or were designed to obtain two distinct groups rather than a continuum of religious atti­tudes. In order to minimize the dimensions of belief that are included, only Christians, agnostics, and atheists were used in the de­velopment of the scale.

Construction of the scale began with a pilot study using the same population that was used in the final analyses. Results were obtained using two initial, parallel forms of the questionnaire, Form A and Form B, consisting of 22 items each. Half of the par­ticipants received Form A first and the other half Form B, with each receiving the alternate form three weeks later. The items were then analyzed, resulting in the final 21-item scale and corresponding weights for each response. The measure requires participants to indicate their degree of agreement or disagreement with statements

The Religious Attitude Scale is a brief, self-administered scale and should take approximately 15 minutes to complete. No directions are re­ quired for its administration, but scoring in­ volves weighted responses and, therefore, a key is necessary. Because it is directed to­ ward university students with a Christian, atheist, or agnostic background, it would not be appropriate for use with other reli­gious populations.

The normative sample for this scale was derived from a stratified random sample of students from the University of Sheffield. The resulting 463 participants came from all disciplines and ranged from first to fourth year of study. The majority of the sample consisted of Christians, although atheists and agnos­ tics were also included.

The authors used two methods to determine reliability. First, the scale was divided into three sections that were then correlated. Results of this analysis showed that the sections were correlated above .95, suggesting good internal consistency. Sec­ond, Cronbach's formula for the coefficient alpha revealed a score of .97, again indicat­ing good reliability for the scale.

To assess validity of the scale, re­spondents were divided into two groups based on reported religious activities and beliefs. The pro religious group consisted of those who indicated active church member­ ship, church attendance more than three times in one month, and saying private prayers at least once a week. The anti reli­gious group consisted of those who indi­cated their beliefs to be either atheist or ag­nostic. Scores on the Religious Attitude Scale did not overlap between these two groups. Those in the antireligious group had a median score of 60, whereas the pro religious group had a median score of 116, with those reporting more frequent re­ligious activities revealing even higher scores.

Below are 21 statements that concern religious beliefs. Please indicate the extent to which you agree or disagree with each of them. On the right-hand side of the page you will find five alternative answers. Place an "X" opposite each statement in the column that best repre­sents your opinion.

Please do not leave out any statements even if you find it difficult to make up your mind.

The numbers in parentheses after each statement refer to the Thurstone scale values of the items. Values range from O to 11. Low values indicate pro religious and high values antireligious attitudes.

Weights are indicated by the numbers in the ruled columns and should not be included when administering this scale.

Poppleton, P., & Pilkington, G. (1963). The measurement of religious attitudes in a university population, British Journal of Social and Clinical Psychology, 2, 20--36.