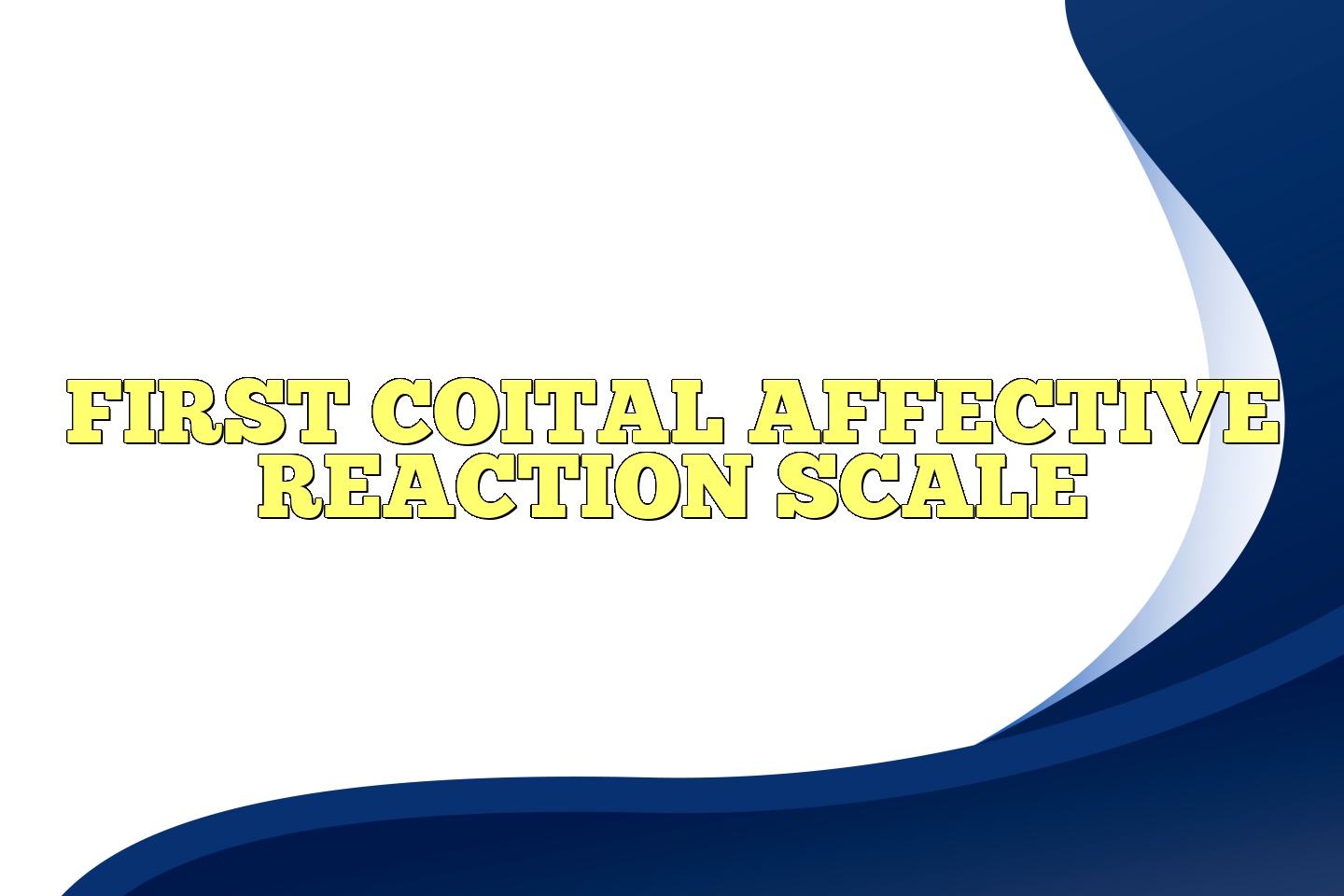 Research on premarital coital activity has generally focused on incidence, prevalence, and changing trends, with little attention given to the affective aspects of the experience. However, affective variables are an important component of human sexual behavior. The importance of assessing affect to facilitate a better understanding of the relation- ship between feelings (as predictors or consequences) and sexual behaviors, attitudes, and norms has been high- lighted by the findings of several researchers (Byrne, Fisher, Lamberth, & Mitchell, 1974; Schwartz, 1993; Weis, 1983). Scales used by Byrne et al. (1974) and Weis (1983), in their assessment of affect, stimulated the development of the First Coital Affective Reaction Scale (FCARS). The scale was developed as part of a cross-cultural research project comparing first coital experiences of American and Swedish women from an affective, behavioral, and attitudinal perspective (Schwartz, 1993). This scale measures subjects’ (male or female) reported affective reactions to their first coital experience.

The First Coital Affective Reaction Scale FCARS consists of 13 bipolar items, using a 7- point Likert format for the measurement of each item. Respondents answering Yes to the question “Have you ever had sexual intercourse (defined as penile-vaginal penetration)?” are asked to indicate the degree to which they had experienced the following feelings in reaction to their first coitus at the time that it occurred: confused, satisfied, anxious, guilty, romantic, pleasure, sorry, relieved, exploited, happy, embarrassed, excited, and fearful. The responses range from 1 (representing Not Experiencing the Feeling at all) to 7 (representing Strongly Experiencing the Feeling), with the numbers in between representing various gradations between these extremes. (To protect anonymity, two versions of the scale are provided to respondents. The respondents who have never engaged in sexual intercourse can complete a version asking about how they think they would feel during their first sexual intercourse. Thus far, only the version for coitally experienced participants has been used for analysis.)

In across-cultural study, the scale, includedina self-report anonymous questionnaire focusing on coital initiation and the circumstances surrounding the event, was administered to a sample of 217 female undergraduates drawn from institutions in the northeast, southeast, mideastern, and western regions of the United States (Schwartz, 1993). As part of the same study, the scale was administered to a sample of 186 female undergraduates from institutions in the north- ern, middle, and southern regions of Sweden. The entire questionnaire, including the FCARS, was translated into Swedish. A complete description of the translation procedure is provided in Schwartz’s article.

Respondents are asked to circle the number (1 to 7) in each item that most closely represents the way they felt. The scale takes approximately 2 minutes to complete, making it easy to include in questionnaires in which time and length are important considerations.

Each scale item uses a 7-point Likert response format yielding a possible score range of 1 to 7. Items 2 (satisfied), 5 (romantic), 6 (pleasure), 8 (relieved), 10 (happy), and 12 (excited) are reversed in scoring so that on all items 1 represents a positive response and 7 represents a negative response. Thus, greater positive FCARS affect would be represented by a lower total score and greater negative affect would be represented by a higher total score. Items may be scored and looked at separately to assess the degree to which a specific affective reaction was experienced (e.g., guilt, exploitation, pleasure, confusion, etc.).

For face validity the scale was reviewed by a panel of three sexuality experts. In addition, 10 of the participants in the pilot test were individually interviewed to get their opinions regarding format, readability, clarity, and possible bias. Recommendations were incorporated into the final version of the scale. The FCARS construct validity was supported by Schwartz’s (l993) findings of expected differences between the American and Swedish samples (greater negative affect among the American group) based on Christensen’s (1969) theoretical assertions. These findings were also consistent with Christensen’s earlier findings comparing Danish and American cultures (Christensen & Carpenter, 1962a, 1962b; Christensen & Gregg, 1970).

The FCARS has recently been translated to Arabic and administered in modified version to Turkish university students (Askun & Ataca, 2007).

This scale is copyrighted by the author. With appropriate citation, it may be used without permission for the purpose of research.

How do you think you will react to your first sexual intercourse at the time that it occurs? I anticipate feeling: (The 13 responses for Question 2 are repeated.)

Christensen, H. T., & Carpenter, G. R. (1962a). Timing patterns in the development of sexual intimacy: An attitudinal report on three modern western societies. Journal of Marriage and the Family, 24, 30–35.

Schwartz, I. M. (1993). Affective reactions of American and Swedish women to their first premarital coitus: A cross-cultural comparison. The Journal of Sex Research, 30, 18–26.