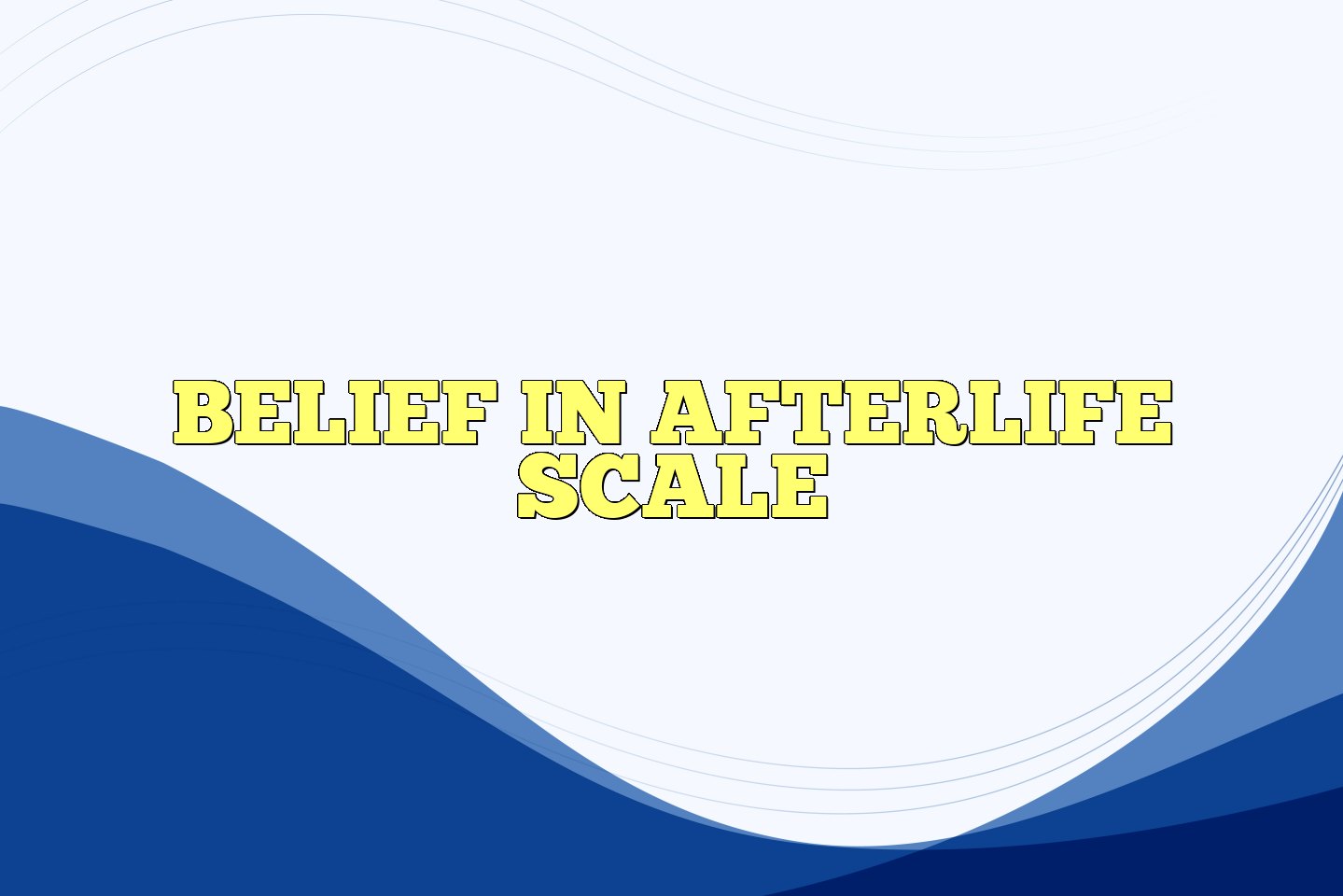 belief in any particular form of afterlife; the wording of items on the test could be equally agreed with by someone who believes in reincarnation as one with a more, for exam­ple, Orthodox Christian view of the hereafter.

Osarchuk and Tatz (1973) pro­ posed two forms (Form A and Form B) of the BA scale. Each consists of 10 statements reflecting acceptance or rejection of the idea of an afterlife. Form A contains seven re­ verse-scored items and Form B has six such items. The scale uses Likert scaling, with subjects responding on a O (total disagree­ment) to 10 (total agreement) scale. A score is derived by summing the responses after reversing those for items rejecting belief in an afterlife; therefore, a higher score indi­ cates greater acceptance of the idea that life continues, in some form, after death.

The first, practi­cal consideration is selecting a form of the scale to use. Two forms were developed to serve as pretest and posttest in Osarchuk and Tatz's (1973) original experiment. Of the available published sources using this. scale, only one (Berman & Hays, 1973) specifically mentions that Form A was used; the other articles to be reviewed here did not specify which form of the scale was used. Two (Littlefield & Fleming, 1984; Schoen­rade, 1989) were pretest-posttest experi­ments and presumably used both forms.

One possible variation from Osarchuk and Tatz's (1973) original instructions for the use of the scale is in the Likert scale to be used by subjects. For example, Smith, Range, and Ulmer (1992) had their subjects respond on a 1-5 scale instead of the 0-10 scale used by Osarchuk and Tatz (1973).

A potential difficulty in using the scale relates to the required reading level of the items (see appendix). Many of the items would be difficult to understand for some­ one without a fairly extensive vocabulary. The language used renders the scale not at all appropriate for use with children.

Osarchuk and Tatz (1973) had 169 male and female students at C. W. Post Center (Long Island University) respond to 50 statements of belief or nonbe­lief in an afterlife. The two forms were con­ structed by randomly assigning to each form 10 of the 20 items that best distinguished the upper and lower 20% of subjects on the total score for all 50 items.

Osarchuk and Tatz (1973) used this scale in an experiment examining how inducing fear of death would affect belief in the af­ter life. They did not present official norms for the scale, but their pretest scores are in­ formative concerning both forms' psycho­ metric characteristics. Across forms, the av­erage score for the 311 male and female introductory psychology students who com­pleted the experiment was 52 (Form A, M = 53, SD = 24.41; Form B, M = 51, SD = 25.57). Male and female subjects scored similarly (averaging 52.3 and 51.4, respec­tively). Catholic and Protestant subjects (with means of 61.4 and 62.5, respectively) scored higher than agnostics/atheists or Jews (averaging 48.9 and 42.4, respec­tively), though these groups were not statis­tically compared. Berman and Hays (1973), however, found significantly higher BA score for females than males in their study of "300 college-age subjects," though they do not report any statistical tests or means.

Schoenrade (1989), using a different scoring procedure (though not explicitly stated, apparently averaging responses on a 1-11 scale rather than summing responses on a 0-10 scale), found an average of 8.01 for the 80 University of Kansas general psy­chology students (all of whom were Christ­ian and at least moderately interested in reli­ gion) who completed the BA scale as a pretest in her experiment. Similarly, Smith, Range, and Ulmer (1992) found an average score of 4.3 (determined by averaging re­sponses on a 1-5 scale) for their 121 sub­ jects who had experienced the death of a loved one in the last 7 years.

Of the published sources, none report any internal consistency ratings or other statistics of reliability for the scale. Osarchuk and Tatz (1973) reported the Form A and Form B pretest scores provided above for 156 and 155 subjects, respectively, but did not perform any statistical tests to com­ pare the scales. In one unpublished source, Casebolt (1992) used Form A of the BA scale as an experimental pretest for his 60 introductory psychology subjects and found it to have a Cronbach's alpha of .89.

In their original research, Os­ archuk and Tatz selected from their initial pool of subjects a low BA and high BA group. One third of each group was pre­sented with images and statistics relating to the chance of death for people in their age group (death threat condition); one third was told that they would be given a series of electrical shocks of varying intensity (shock threat condition); the remaining subjects, the control group, played with a child's toy for the period of time taken by the shock and death threat manipulations. Examina­tion of pretest-posttest change scores showed that only the high BA-death threat group showed a significant change in BA score (an average increase of 9.5 points). Osarchuk and Tatz also found that the BA scale scores were significantly correlated with subjects' estimates of their own belief in an afterlife, measured on a 1-100 scale with 5-point intervals (r (309) = .428, u < .001). Similarly, Berman and Hays (1973) found a significant relationship (r = .24, p < .01) between the BA scale Form A and the Lester (1967) fear of death scale with their 300 college student subjects.

Littlefield and Fleming (1984) used the BA scale in a pretest-posttest experiment. Their 87 introductory psychology subjects completed the BA and several death-related scales. Three weeks later the same subjects participated in an experiment in which one third faced a death threat (watched a film about death by fire), one third watched an anxiety-provoking film unrelated to death, and one third watched an innocuous film. All subjects then completed posttest BA and death scales. Change scores for the BA scale showed a decrease for the death-threat group and a slight increase for the other two groups.

Schoenrade (1989) completed a similar experiment with I 00 general psychology students, all of whom were Christian in background and at least moderately inter­ ested in religion. All subjects had been asked previously to rate how strongly they believed in an afterlife on a 1-9 scale. Eighty of these subjects had also completed the Osarchuk and Tatz BA scale. They ma­nipulated confrontation with one's own death by having subjects complete the Spilka, Stout, Minton, and Sizemore (1977) Death Perspectives scales and the other form (not specified) of the Osarchuk and Tatz BA scale either before or after listen­ing to a tape describing the events of their own immediate and unexpected death. Sub­ jects classified as high in belief in afterlife according to the self-report item scored higher on positive and negative death per­spectives when confronted with their own deaths than did those subjects who were high in BA but not confronted with their own death first. However, there was no par­allel increase in BA scale scores for those subjects who completed the Osarchuk and Tatz scales.

Casebolt, J. (1992). [The effect of terror man­agement and the threatening or bolstering of after­ life beliefs on attributional derogation of AIDS vic­tims.] Unpublished raw data.