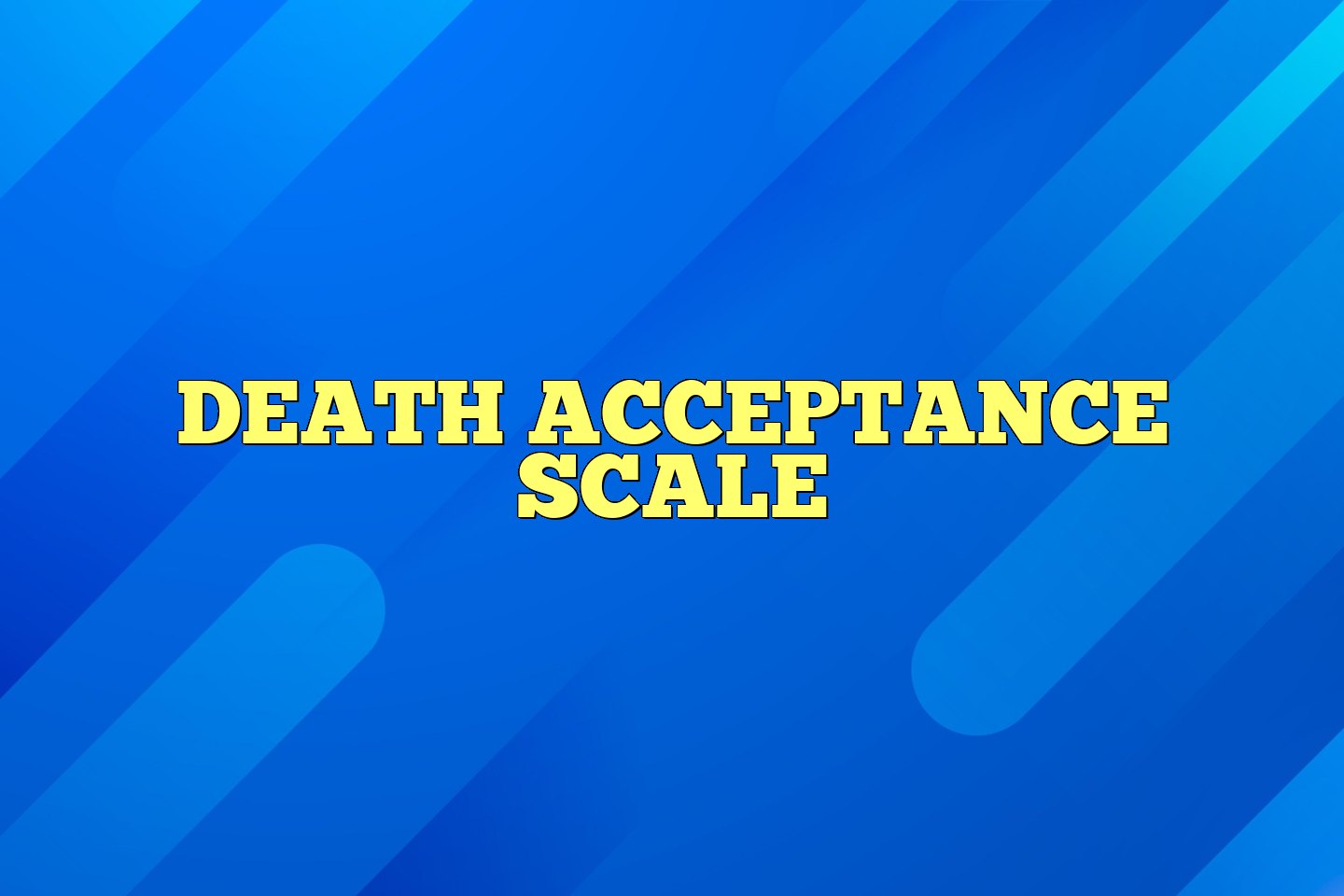 The Death Acceptance Scale is based on the theoretical idea that the oppo­ site of death anxiety (the construct that has received so much attention in death re­ search) could be either denial-rejecting and refusing to deal with death-or accep­tance-coming to terms with death through thought and effort. Ray and Najman (1974) suggest that subjects scoring lowest on a measure of death anxiety may actually have the most anxiety, and are very successful death deniers "in the Freudian sense-peo­ple who do feel anxiety but cannot acknowl­edge it" (p. 312). A person who has come to terms with death, on the other hand, may willingly acknowledge some remnant of lin­gering anxiety.

The variable that this scale is intended to measure is death acceptance. Ray and Naj­man (1974) see a death-acceptant person as someone who "will not deny that [death] does concern them but will also be able to be positive about death" (p. 312).

The original scale is a 7-item Likert scale. All the items are written in the positive direction; agreement indicates a higher level of death acceptance. Ray and Najman (1974) do not include specific in­structions regarding what Likert scale should be used. Several items on the scale (see appendix) are suggestive of reverse­ scored death anxiety items, and at least one item (item 5), because of its gender-exclu­sive wording, could be potentially difficult for female subjects to respond to.

The scale is short and standardized instructions used with typ­ical Likert-type items would work. Scoring is simple and straightforward. The items lend themselves to being nested within a longer instrument.

The original re­ search using the Death Acceptance Scale (Ray & Najman, 1974) was a survey of 206 Australian first-year sociology students. The Death Acceptance Scale was part of a longer instrument including measures of death anx­iety, achievement orientation, and authori­tarianism. No average scores or any other sort of normative information were re­ ported.

Ray and Najman (1974) report cor­ relations in the -.20s between the Death Ac­ceptance Scale and two death anxiety mea­ sures (Templer, 1970; Sarnoff & Corwin, 1959). They also found that religious non­ believers scored significantly higher on death acceptance than religious believers. They did not explain how this distinction was made. Thus difference was not found for either of the death anxiety scales, and thus was interpreted as supporting the idea that death acceptance is an independent con­ struct from death anxiety.

Durlak and Kass (1981) included the Death Acceptance Scale, along with 15 other death-related scales, in a factor-ana­ lytic study of data from 350 college stu­ dents, approximately equal in gender and averaging 21 years of age. The Death Ac­ceptance Scale loaded moderately and nega­tively on two of their five factors: Negative Evaluation of Personal Death and Negative Reaction to Pain. No independent accep­tance factor emerged.

Warren (1982) studied a sample consist­ing of death involved subjects (e.g., funeral directors, etc.), at-risk subjects (sport para­chutists and hang gliders), and control sub­ jects selected to match the age and educa­tion of the first two groups. They found that the Death Acceptance Scale was signifi­cantly and negatively correlated with measures of death fear, anxiety, and concern (r's -.23 to -.36). Subjects who identified them­ selves as accepting of death had higher Death Acceptance Scale scores than those who did not.

Ray and Najman (1987) propose a new balanced Death Attitude Scale, consisting of items from the Death Acceptance Scale, the Templer (1970) Death Anxiety Scale, and several new items. This new scale, scored in the direction of a more negative attitude to­ ward death, was correlated -.35 with a mea­ sure of social desirability, .45 with a modi­fied version of the Taylor (1953) Manifest Anxiety Scale, and .20 with the Rosenberg (1965) Self-esteem Scale. Subjects in this study were 95 volunteers who returned a survey sent to a sample of 500 registered Australian voters.

Please indicate the extent to which you agree with each of the following statements.