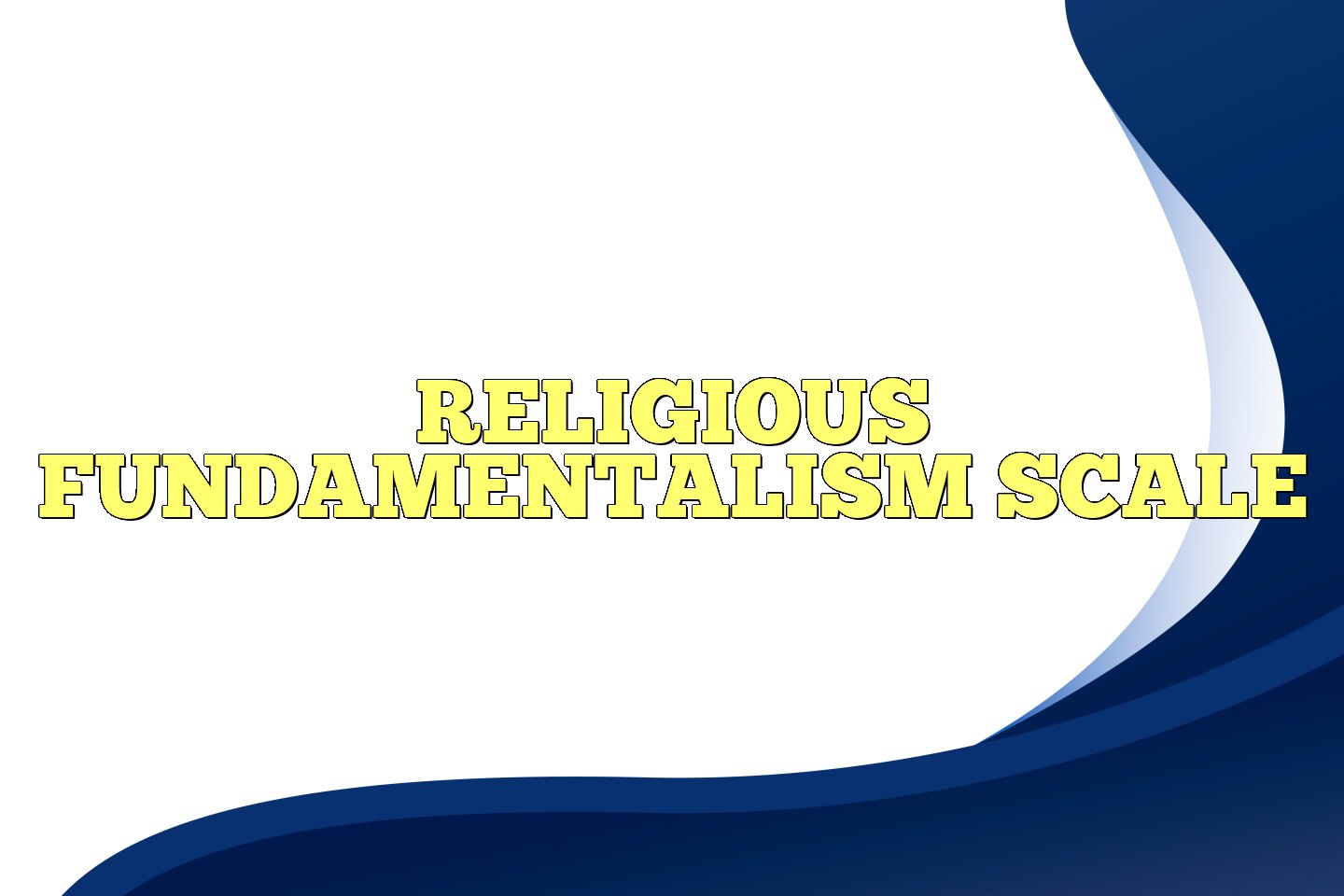 The Religious Fundamentalism Scale (REL) is one of 13 Minnesota Multi­ phasic Personality Inventory (MMPI) con­ tent scales developed by Wiggins (Wiggins, 1966). The term "fundamentalism" was not intended to refer to any specific group or formal religious body. Item content is most reflective of strong religious beliefs and re­ligiously motivated behavior. Those with high scores on the REL see themselves as religious, churchgoing people who sub­ scribe to a number of fundamental religious beliefs regarding interpretation of the Bible, the second coming of Christ, and the exis­tence of hell and the devil (Wiggins, 1966). They tend to view their faith as the only true one. In addition to firm religious belief, high REL scores may be indicative of more global rigidity, dogmatism, and intolerance of those whose beliefs are different (Cald­ well, 1988; Graham, 1987). Among psychi­atric populations, elevated REL scores are associated with lower rates of substance abuse, impulsive behaviors, and family con­flict, but higher rates of disorganization and delusional thinking (Graham, 1987; Lachar & Alexander, 1978). Low REL scoressug­ gest nonfundamentalist religious beliefs and may indicate greater tolerance of divergent beliefs and practices (Graham, 1987). The REL does not effectively distinguish be­ tween those with rigid versus flexible reli­gious beliefs. Therefore, researchers and clinicians must interpret the REL with cau­tion and perhaps only in the context of an additional indicator of dogmatism/rigidity.

The REL content scale was de­ rived from the MMPI (Hathaway & McKin­ ley, 1951), the most widely researched and utilized personality inventory in the world. In contrast to the empirical criterion keying procedures used in development of the stan­dard MMPI scales, Wiggins (1966) devel­oped the content scales to reflect the manifest or "overt" content of the person's self­ report. He therefore applied both intuitive face validity judgments and psychometric principles to collapse the original 26 MMPI item categories (including one labeled "Re­ligious Attitudes") into mutually exclusive content scales that represent "the major sub­stantive clusters of the MMPI" (p. 12). Em­pirical criteria for inclusion of an item within a content scale were a correlation of the item with its total scale of .30 or greater and the requirement that the correlation of the item with its scale exceed its correlation with all other scales. This process resulted in adoption of 13 content scales (including the REL) with maximal homo­geneity and no item overlap. The scales are internally consistent and moderately inde­pendent (Wiggins, 1969; Wiggins, Gold­ berg, & Applebaum, 1971).

The REL is composed of 12 items that tap fundamental religious beliefs. Half of the items are either explicitly Christian or broadly Judeo-Christian. The remaining items are clearly religious but not specifi­cally Judeo-Christian. The 12 items are spread throughout the MMPI. Each is scored l if true, with the exception of the last item (491), which is scored 1 if false. Norms are available for raw scores that range from O to 12 (higher scores indicate greater religious fundamentalism). REL scores may also be converted to T scores for clinical evaluation. In this case, a T score of 70 is considered high, whereas 40 is low.

Unfortunately, available normative data is based on stan­dard administrations of the full MMPI. While no norms are available for separate administration of the REL items, research indicates minimal effect on results when single MMPI scales are administered sepa­rately (Perkins & Goldberg, 1964). The MMPI contains 566 items that cover a range of subject matter from physical condition to the subject's moral and social attitudes. Time for administration varies but rarely ex­ceeds 90 minutes. Subjects must have a sixth-grade reading level and are instructed to respond true or false to every item. The MMPI is easily self-adminstered and re­quires no extra instruction or supervision. REL scale scores may be obtained by either hand scoring the 12 items or utilizing a computer scoring program. In contrast to the standard MMPI scales, no K-correction or other internal adjustment procedure is available to correct for self-favorableness versus self-criticalness on the REL scale. The Religious Fundamentalism Scale was eliminated from the MMPI-2 (Kohutek, 1992). Only one of the REL on the MMPI- 2, making calculation of the REL impossi­ble from MMPI-2 data.

Wiggins (1966) normed the MMPI content scales using 16 small but distinct samples composed of mil­itary personnel, college students, and psy­chiatric patients. Mean REL scores ranged from 7.33 among psychiatric patients with "symptom reactions" to 5.11 for patients di­agnosed with sociopathic personality distur­bance. For a sample of 261 Air Force men, the mean was 7.16, whereas for 96 college students the mean was 5.91. Using the re­ vised Minnesota norms (Hathaway & Briggs, 1957), REL means were 6.32 for men (N = 225) and 7.17 for women (N = Subsequent state university norms (Illinois, Oregon, and Minnesota) (Wiggins et al., 1971) offered REL means of 5.75 for men (N = 291) and 6.32 for women (N = Finally, Colligan and Offord (1988) recently offered updated content scale norms utilizing contemporary census­ matched adult samples. Mean REL scales were 6.7 for men (N = 646) and 7.8 for women (N = 762). Across each of these normative studies, the range of REL raw scores is typically O to 12.

In spite of their relative brevity, each of the Wiggins content scales demon­strates consistent reliability across divergent samples (Taylor, Ptacek, Carithers, Griffin, & Coyne, 1972). Of the 13 scales, the REL offers the highest internal consistency coefficients. Coefficient alpha reliability was .67 for Air Force men and ranged from .82 to .89 (men) and .76 to .86 (women) in three samples of university students (Wiggins, 1966). Additionally, the REL was found to have test-retest reliability of .95 (men) and .93 (women) after a six-week interval in a sample of 203 college students.

In his original monograph, Wig­ gins (1966) utilized the MMPI content scales in discriminant analyses on several distinct psychiatric groups. The contribution of the REL to discriminating between diag­nostic groups was negligible. An evaluation of the factor analytic convergence of the content scales with the Differential Person­ality Inventory scales among a large psychi­atric sample found the REL to load highly on a factor titled "impulse expression versus religiosity." Here REL was negatively cor­ related with rebelliousness, impulsivity and deviant attitudes (Hoffman & Jackson, 1976). The REL also tends to show slight positive correlations with age and small negative correlations with education (Colli­ gan & Offord, 1988).

The REL tends to measure a highly spe­cific dimension not represented on standard personality inventories. For example, the REL shows small and inconsistent correla­tions with the Adjective Checklist, California Personality Inventory, and the Edwards Per­sonal Preference Schedule (Wiggins et al., 1971). The REL also correlates minimally and in the expected direction with the MMPI standard scales. For example, correlations with scales tapping distress and impulsivity were as follows in the Wiggins et al. (1971) study: F (distress) = -.26; Scale 2 (depres­ sion) = -.17; Scale 4 (psychopathic-deviate) = -.14; and Scale 9 (hypomania) = -.15. Finally, convergent validity for the REL was reported by Taylor et al. (1972), who found substantial correlations between the REL and the Omnibus Personality Inven­tory-Religious Orientations Scale (r = .83). These authors also utilized two example an­chored scale questions (e.g.,. "How reli­gious are you, in a fundamentalist sense?") with polar anchors being "strongly religious vs. not very religious in a fundamentalist sense" (p. 546). Correlations between the two anchored scales and the REL were .759 and .774.

A subsequently developed MMPI content scale, the Religious Identification Scale (RI: Panton, 1979) measures much the same con­ struct and includes 10 of the 12 REL items. The RI, however, currently lacks sufficient demonstration of its psychometric proper­ ties. The REL must be recommended as the best established MMPI scale of religious be­lief and behavior.

Religious Fundamentalism Scale of the MMPI

Caldwell, A. B. (I 988). MMPI supplemental scale manual. Los Angeles: The Caldwell Report.