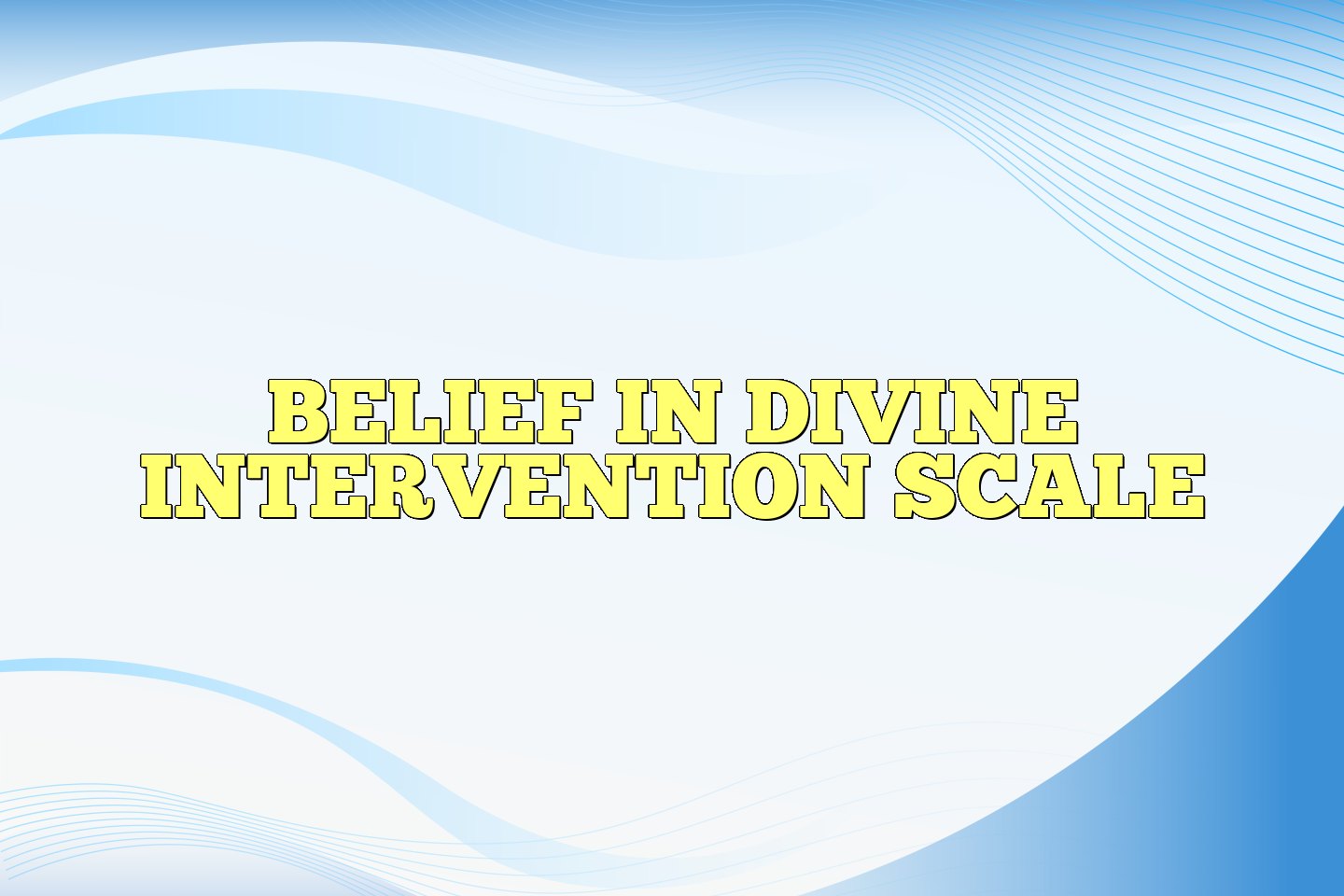 The Belief in Divine Intervention Scale (BOIS) is intended to be a general mea­ sure of belief in divine intervention for use with a variety of populations and situations. The scale is reported to be unidimensional.

The six items of the BOIS were selected from an initial 10-item pool. The original ten items were created to tap various categories of divine intervention (e.g., physi­cal healing and direct communication with humans). No theoretical basis for the cate­gories was noted by the authors. Those items with corrected item-total correlations above .6 were retained. Of the six items retained, two dealt with divine healing; two others measured divine communication; one item focused on divine intervention in nature; and a final item dealt with a global statement of belief in divine intervention. A 6-point rating scale is used to assess level of agreement or disagreement with each item; scale options range from "strongly disagree" to "strongly agree" with anchors for every point. Two of the six items are reverse scored.

The paper-and­ pencil scale is easy to administer, score, and interpret. It requires no special examiner skill or training. Minimal directions are nec­essary for administration and scoring. The six items would take only a few minutes to complete by simply selecting a rating on the 6-point scale. Scoring likewise requires lit­tle time and is obtained by converting the scale to a 1-6 point scale and then summing the scores of the six items (after reversing items 3 and 5). The purpose of the test is clear: to measure an individual's self-re­ ported belief in divine intervention.

A ceiling effect was observed with the Christian college group; most of the stu­ dents in this sample scored near the maxi­ mum possible score. Thus it was noted that the "BOIS is not and will not be effective in discriminating among individuals within a homogeneous and extreme group" (Degel­ man & Lynn, 1995, p. 43). Whether or not the items would differentiate among mem­bers of different Christian traditions remains to be investigated.

Degelman and Lynn (1995) esti­mated the internal consistency of the BOIS for both sub-samples as well as the com­bined sample. The community college sam­ple produced a Cronbach's alpha of .898, the Christian college sample yielded .924, and Cronbach's alpha for the total sample was .910. It was noted by the authors that the low reliability found for the Christian college subsample was likely due to the re­stricted range of scores produced by the ceiling effect. No estimates of test-retest re­ liability are yet available.

Validity: The items appear clearly related to the target construct of belief in divine inter­ vention. Preliminary support for the validity of the BOIS is found in Degelman and Lynn (1995). The authors conducted a principal components analysis using the combined sample of community and Christian college students (N = 209). They found that all six items had high loadings on the primary component (loadings ranged from .811 to .845). This finding supported their hypothe­sis that the BOIS was in fact measuring a unitary construct. Similar findings were re­ ported for a principal components analysis using only the community college subsam­ple; no analysis was reported for the Christ­ ian college subsample.

No other data were provided to confirm the construct validity of the scale. A compar­ison of scores on the BOIS with the two closely related measures cited by the authors (i.e., God as Causal Agent scale [Ritzema, 1979; Ritzema & Young, 1983] and the Di­ vine Influence scale [DeVellis et al., 1985]) might be helpful. Given the high face validity of the scale, an exploration of the role of so­cial desirability may also be necessary.

Some supportive evidence for the concur­ rent validity of the BOIS can be distilled by examining the results of the authors' analyses involving three additional variables. The au­thors hypothesized that scores on the BOIS would be significantly and positively related to self-rated importance of religion (Gorsuch & McFarland, 1972), external locus of con­trol (Levenson, 1981), and a belief in a just world (O'Neill et al., 1988). BOIS scores were found to be significantly related to self­ reported importance of religion (r = .78, p < .001). BOIS scores were not found to be sig­nificantly related to either external locus of control or a belief in a just world (p > .10).

Directions: Please respond to each statement by circling the number that best reflects the ex­tent to which you agree or disagree with each statement.

Subsequent Research: Given the recent de­velopment and publication of this measure, no subsequent research has yet been pub­lished.