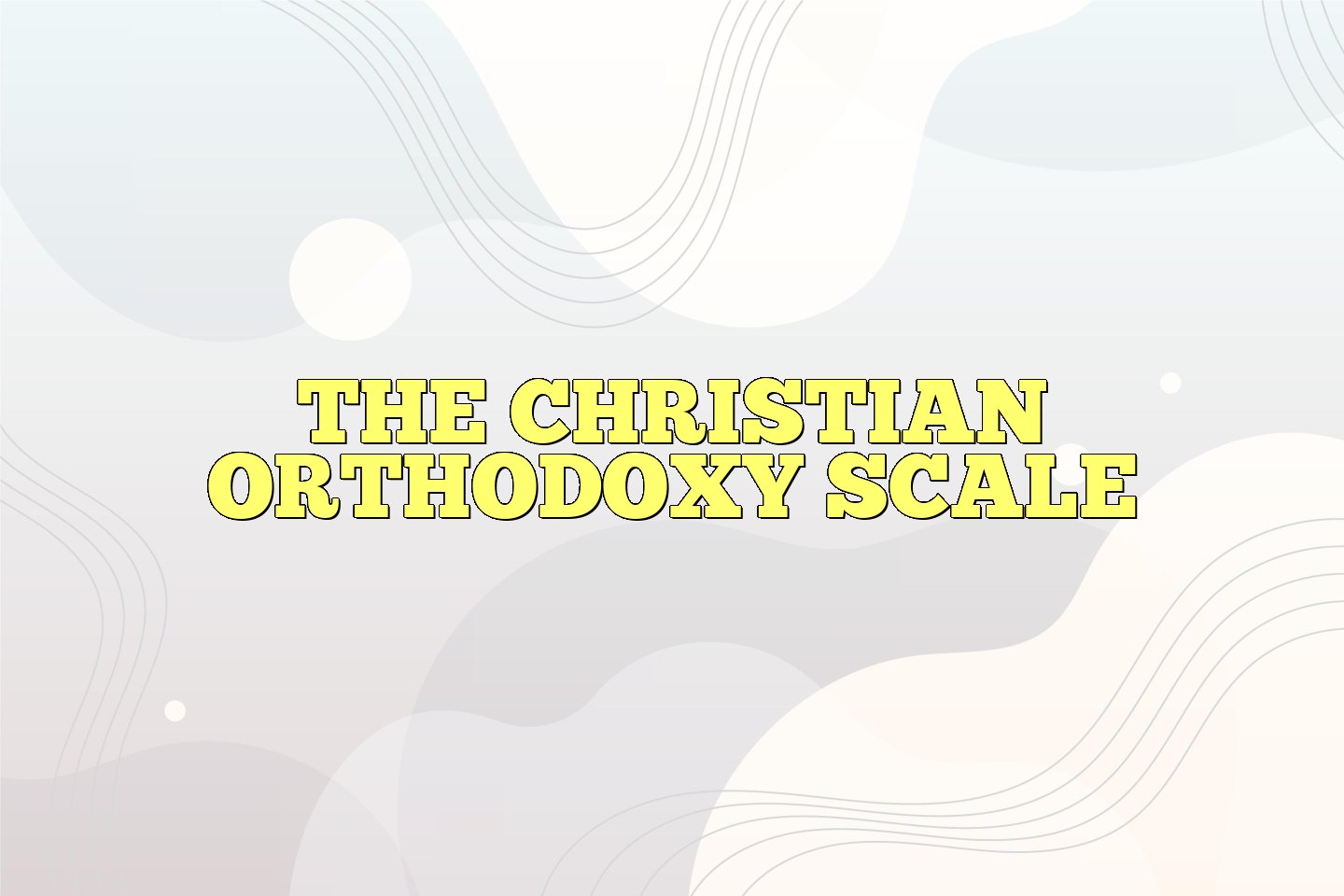 The Christian Orthodoxy (CO) Scale is a relatively unidimensional measure of the degree to which someone accepts be­liefs central to Christianity. Although, over the centuries, different Christian groups have varied somewhat in particular aspects of their beliefs, there are certain beliefs that are common to all who would use the name "Christian." These are the "bedrock" state­ments that define the faith and are expressed in the Apostles' Creed and the Nicene Creed. It is the degree of acceptance of the content of such statements that this scale is designed to assess.

The CO Scale taps beliefs that fall into the following categories: the exis­tence of God, the nature of the Trinity, God as creator, Jesus as divine, the virgin birth of Jesus, Jesus' mission to save humankind, Jesus' death and resurrection, Jesus' immi­nent return to Earth, God's judgment of people after death, life after death, the inspira­tion of the Bible, miracles, and the efficacy of prayer. The various items that make up the scale represent one or more of these ele­ments. A tenet of the scale is that they are knit together to define Christian orthodoxy.

Two versions of the CO Scale are avail­ able. The first, longer version (Fullerton & Hunsberger, 1982) is highlighted in this re­ view. The second, shorter version (Huns­ berger, 1989) is composed of only six items; yet, for its brevity, its statistical properties are comparable to those of the longer scale. The two scales correlate highly with each other.

The CO Scale comprises 24 items and takes 10 to 15 minutes to complete. Half of the items are negatively worded so that dis­ agreement with the item is scored in the or­ thodox belief direction. Each item is an­swered on a 7-point Likert scale ranging from -3 (strongly disagree) to +3 (strongly agree), with O as a neutral point. A constant of 4 is added to each raw score, and these numbers are then summed to yield the total CO score. CO scores can range from a low of 24 to a high of 168.

No special in­ structions or training are needed. The ratio­nale stated in the instructions for taking the scale is clear. The resulting CO score can be meaningfully compared across a variety of religious denominations.

Subject samples on which item selection was based included several hundred students from Manitoba high schools and the University of Mani­toba. The subjects came from predomi­nantly Christian (both Protestant and Catholic) backgrounds and a cross-section of the socioeconomic strata.

students. In addition to reporting the overall scores for each sample, scores for males and females are reported separately. Some dif­ferences in CO scores between males and females seem apparent; for 7 of the IO be­liever groups (discounting the apostates), the women scored higher than the men.

As expected, the apostates had, by far, the lowest CO score. Their overall mean was 61.8; all other groups averaged be­ tween l l l.9 and 130.4. These are sufficient comparison data for future research pur­poses.

The CO Scale has strong statis­ tical reliability properties. In the several samples mentioned above, mean interitem correlation coefficients range from .57 to .70. Internal consistency reliability coeffi­cients for the same samples are all .98, ex­cept for one that is .97. Factor analysis showed that there was one factor that runs through the set of items and that all of the items load on this factor. These findings suggest that the CO Scale items "hang to­ gather" well to form a unidimensional mea­ sure of orthodox belief.

Similarly impressive validity coef­ficients are documented. The CO Scale shows the following correlations with a va­riety of measures that it ought to predict: at­ tendance at religious services (.62), fre­quency of prayer (.70), scriptural-devotional reading (.57), overall religious behavior (.75), and extent of trust in the religious guidance of the Bible (.77) and the church (.68).

Furthermore, mean CO scores for various "known groups" emerge the way they should. For example, people who were raised in a particular religion but then re­jected religion had a mean of 61.8, whereas people who merely switch from one denom­ination to another had a mean of 130.4. Overall, these data and the face validity of the items on the scale suggest that it mea­ sures what it is intended to measure.

This survey includes a number of statements related to specific religious beliefs. You will probably find that you agree with some of the statements and disagree with others, to vary­ing extents. Please mark your opinion on the line to the left of each statement, according to the amount of your agreement or disagreement, by using the following scale:

If you feel exactly and precisely neutral about a statement, write down a "O" in the space provided.

Note: No response is scored a "0" on the (-3 to +3) response scale for each item. It is suggested that a par­ ticipant's data be discarded if he or she does not answer 10 or more items. Data can easily be prepared for analysis rescaling responses such that -3 = 1, -2 = 2, -1 = 3, 0 (or no response)= 4, + I = 5, +2 = 6, and +3 = 7. The keying of all negatively worded items-indicated above by an asterisk (*)-is reversed so that for all items a low score indicates an unorthodox belief and a high score indicates an orthodox belief. The CO score is then computed for each subject by summing over the 24 items.

Note I: The scale authors also use a -4 (very strongly disagree) to +4 (very strongly agree) response format. Procedures for using this format are similar to those for the -3 to +3 format noted above.

Note 2: Those items printed in bold face are the six items for the short form of the scale.

Altemeyer, B., & Hunsberger, B. (1992). Au­ thoritarianism, religious fundamentalism, quest, and prejudice. The International Journal for the Psychology of Religion, 2, 113-133.

Kirkpatrick, L. A. (1993). Fundamentalism, Christian orthodoxy, and intrinsic religious orienta­tion as predictors of discriminatory attitudes. Jour­ nal for the Scientific Study of Religion, 32, 256-268.

Pratt, M. W., Hunsberger, B., Pancer, S. M., & Roth, D. (1992). Reflections on religion: Aging, be­ lief orthodoxy, and interpersonal conflict in the complexity of adult thinking about religious issues. Journal for the Scientific Study of Religion, 31, 514-522.

Hunsberger, B., Pratt, M., & Pancer, S. M. (1994). Religious fundamentalism and integrative complexity of thought: A relationship for existential content only? Journal for the Scientific Study of Re­ligion, 33, 335-346.