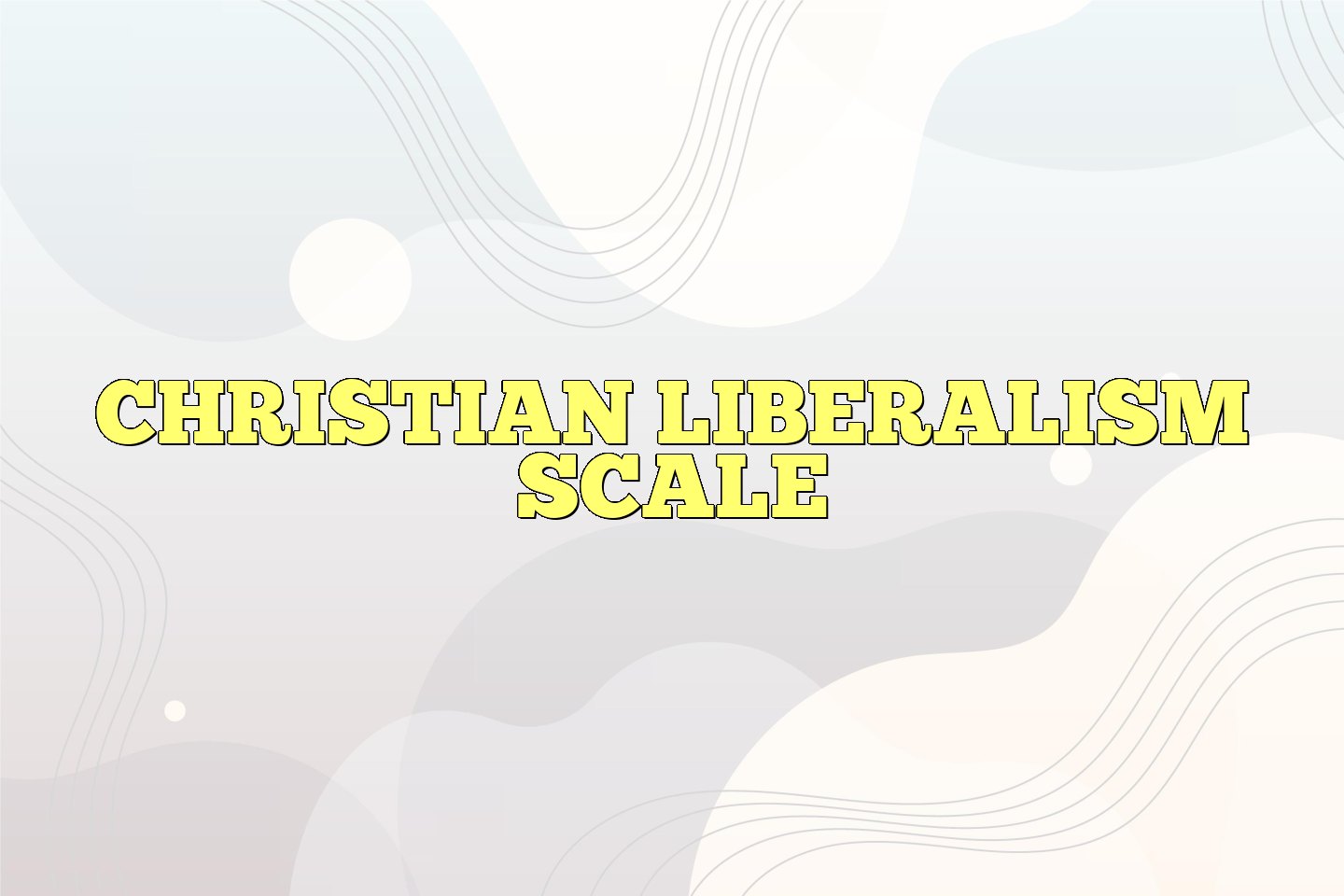 This CHRISTIAN LIBERALISM SCALE measures a personal commitment to the theological, anthropo­logical, and epistemological assumptions of liberal Christianity. Stellway (1973) argues that within a liberal Christian framework, God is described more in natural than in supernatural terms. Orthodox notions about sin receive little attention, emphasis being placed instead on the dignity and creative potential of human beings. Associated with these beliefs is a confidence in reason and empiricism rather than revelation as the most reliable means for obtaining trustwor­thy knowledge.

Stellway created his instru­ment to test the prediction that religious and sociopolitical liberalism would be positively correlated. Researchers had explored this question previously but typically had as­ sumed that religious liberalism was made apparent in an absence of fundamentalism, orthodoxy, or conservatism. Stellway's po­sition was that "Christian liberalism consti­tutes more than a residual category" and that it "must be measured as precisely as possible" (p. 431).

This operationalization of Christian liber­alism includes six positively scored state­ments. Reactions to each are made along a 5-point strongly disagree (I) to strongly agree (5) scale. Stellway analyzed the aver­ age reaction to each statement, but total scores could be computed by summing across all six responses. In this latter in­ stance, scale values would range from 6 to 30.

Stellway used in­terviews to obtain his data, but these items could be combined in a simple self-report questionnaire that utilizes standard instruc­tions and typical administration procedures. Subjects should be able to complete such an instrument in five minutes or less. The six items seem fairly easy to read, and such a scale represents a reasonable and usefully brief operationalization of Christian liberal­ ism as defined by Stellway (see appendix).

Residents of a small town and rural areas of west-central Illinois served as Stellway's subjects. All 322 were white male heads-of-households between the ages of 25 and 50. Stell way did not report the mean and standard deviation of his Christian liberalism scores. However, given the nature of his sample, these data would not have served as acceptable norms for most research purposes.

A number of findings supported the validity of this scale. Most important, perhaps, Christian liberalism correlated -.48 with a measure of Christian conservatism. After education and occupational status were partialed out, Christian liberalism also displayed predicted relationships with a be­lief that free enterprise should be controlled (.22), a commitment to the use of law to im­ prove the living conditions of disadvantaged groups (.19), and a personally expressed lib­eral sociopolitical preference (.18).

Based on the sociological literature, Stellway further hypothesized that partial correlations would be more robust in sub­ jects who had unfulfilled occupational aspi­rations. With these participants, Christian liberalism did indeed correlate more strongly with a belief in controlling free en­terprise (.49) and with a liberal sociopoliti­cal preference (.35). An inverse relationship also appeared with a conservative defense of the status quo in American society (-.34).

[The items below should be preceded by standard questionnaire instructions. Subjects re­spond to each statement using the following response options: "strongly agree" (5), "agree" (4), "neutral or no opinion" (3), "disagree" (2), and "strongly disagree" (I).]

Pyle, R. E. (1993). Faith and commitment to the poor: Theological orientation and support for gov­ernment assistance measures. Sociology of Reli­gion, 54, 385-401.

Stellway, R.I. (1973). The correspondence between religious orientation and sociopolitical liberalism and conservatism. Sociological Quarterly, 14, 430-439. Copyright© 1973 by the Midwest Sociological Society.