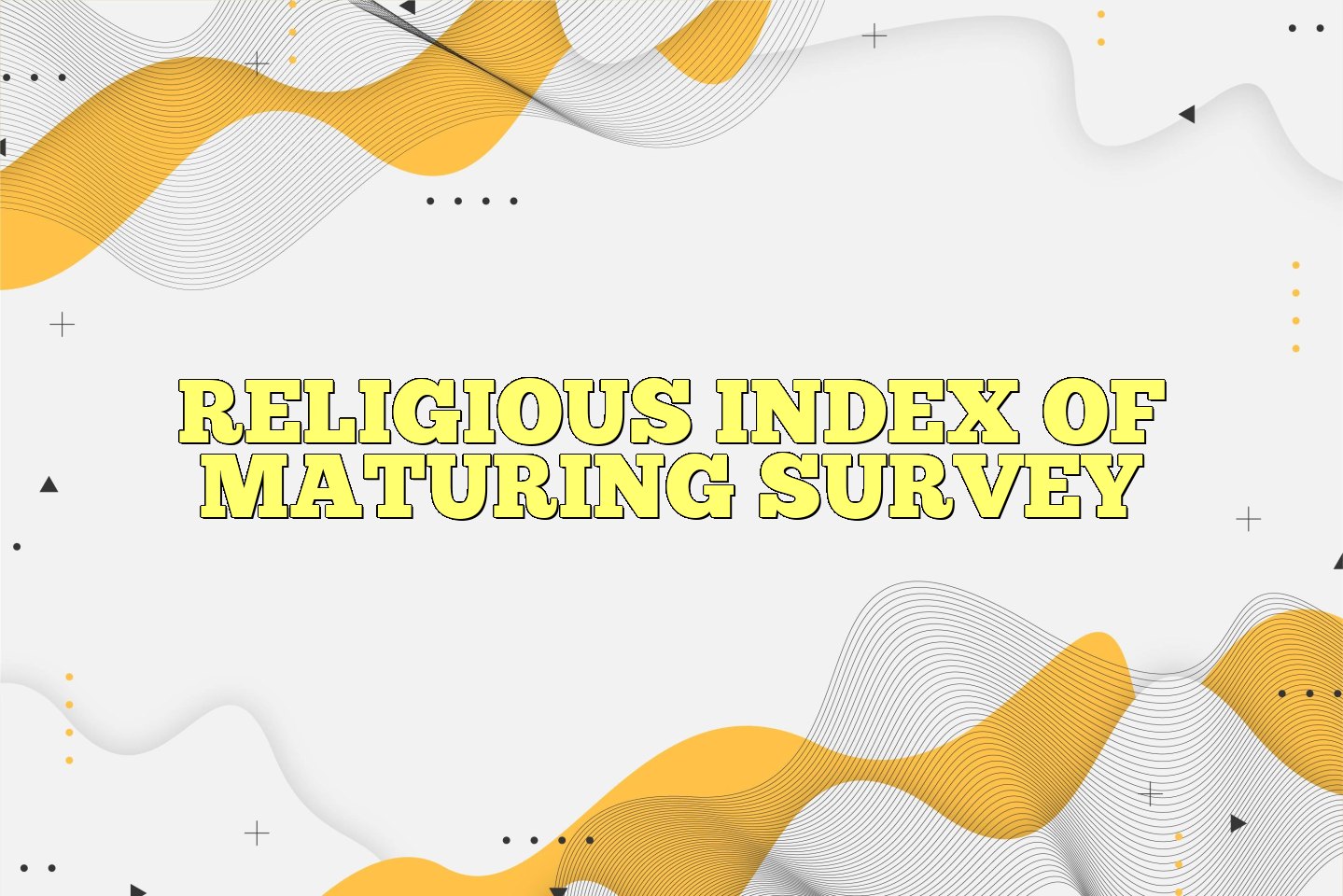 The Religious Index of Maturing then listed the following criteria as defining Survey (RIMS) assesses religious maturity his construct of religious maturity: (a) phe- by evaluating an individual's feelings and nominal in nature; (b) a process and not orientation pertaining to his or her religious necessarily a set of objective standards; (c) life. This measure pertains to religion in reality based; (d) intrinsically motivated; (e) general and does not assess any particular involving a religious identity, either with an religious commitment. organization or as personally defined; (f) in- Marthai (1980) began with the notion valving a religious self concept in that one that religious maturity has some basis in an has a sense of acceptance of self in light of individual's self concept or ego identity. He one's religion; (g) reflecting wholeness; (h) volitionally based; (i) involving changes in behaviors, attitudes and/or values; U) re­flecting growth towards more complete and whole behaviors; (k) associated with satis­faction; (I) somewhat related to physical and cognitive maturity; and (m) an unending growth process.

Marthai constructed 79 state­ment items using, as a guideline, Clark's (1970) 10 questions for appraising mature religion. Other general statements were in­cluded reflecting religious concepts, theo­ logical issues, and generally accepted reli­gious behaviors. After administering this initial version of the instrument to 250 Bap­tist church members in and around the Grand Rapids, Michigan area, Marthai (1980) used a factor analysis of his initial sample results to refine the instrument down to the 19 items having the highest loadings on the primary factor. This factor seemed to be "centered around the constructs of growth, satisfaction and positive behavioral change in and through one's religion" (p. 25).

To score the instrument, Marthai (1980) simply totaled the Likert ratings for the 19 scored items (e.g., A/Completely true = 5, E/Completely false = 1), reversing the val­ues for the five negatively worded items. The Likert ratings were then totaled for an overall score on the RIMS.

The administra­tion of the instrument is straightforward. Statements are clear, concise, and appropri­ ate for a variety of religious and nonreli­gious contexts. This instrument is short and can be easily completed by normal adults in 15 minutes or less. The format allows the measure to be easily combined with other instruments.

The instrument was administered to 216 adolescents (grades 8-12) at three conservative Christian schools in the south. Each school was ad­vertised as nondenominational and conserv­ative in doctrinal beliefs (holding to the fun­damentals of the Christian faith).

All but one of the students were white, and 45% of the respondents were male. Mean grade level was 9.3 years and mean age was 15.5 years. Mean years since con­ version as self-reported was 7.04 years. The denominational preference was 48% Bap­tist, 12% Presbyterian, 8% Methodist, 7% Independent, 3% Pentecostal and Full Gospel, 3% Lutheran, and 19% nonrespon­dent. The students were described as middle class by school administrators.

Thirty-three students from one school were tested twice within a period of 10 days. The test/retest reliability coeffi­cient was .81. The Cronbach inter-item co­ efficient for internal consistency was .93. The high level of internal consistency might be expected based on the selection criterion for the items to be included in the final draft of the instrument.

Since Marthai hypothesized a strong relationship between positive self­ concept and. religious maturity, the Ten­nessee Self-Concept Scale (TSCS) (Fitts, 1965) was administered along with several other instruments in addition to the RIMS. The statistically significant positive correla­tions with the TSCS Total-P scores (r = 0.39, p < .01) and TSCS Moral-Ethical sub­ scale (r = 0.54, p < .01) indicated good con­ struct validity for the RIMS.

The Spielberger State-Trait Anxiety In­ventory (Spielberger, Gorsuch, & Lushene, 1970) was administered as part of the above battery to test the hypothesis that the reli­giously mature individual would demon­strate wholeness, in part by being less anx­ious. The significant negative correlations with both state (r = -0.22, p < .01) and trait anxiety (r = 0.21, p < .01) indicate good construct validity here as well.

This is a survey that will be used to find out how people think about their religion. Please an­swer the following statements by circling the choice which best describe you.

Please respond with your first impression about yourself and do not deliberate on any one question. Please answer for how you personally agree or disagree with the statement and not how other people might expect you to answer. Religion in this survey means all of your per­sonal beliefs about God and spiritual things. There are no right or wrong answers. They are only right if they reflect your personal beliefs.