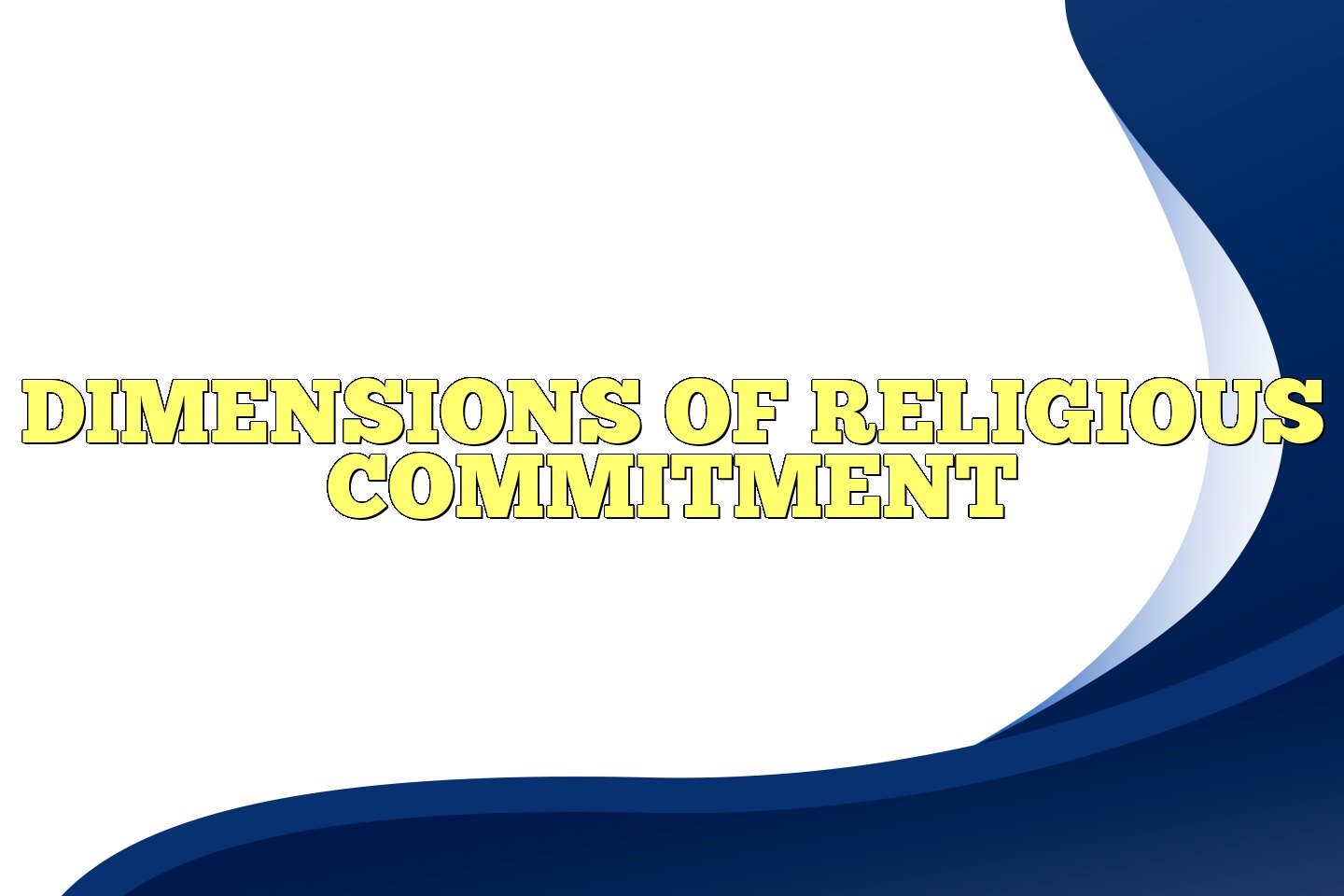 The Dimensions of Religious Commitment Scale is an extensive set of re­ligious measures designed to cover five dimensions of religiosity: belief, ritual, expe­rience, knowledge, and consequences. The latter dimension (consequences) is omitted because it is not strictly a measure of reli­giosity itself. The remaining four dimen­sions are covered by a set of 48 different items, many with multiple subsections.

Weigert and Thomas (1969) raised criti­cisms about the Glock and Stark approach. They pointed to a significant overlap between the belief dimension and knowledge dimension, arguing that both are really part of the ideological domain. Nevertheless, apart from the possibility of an overlap be­ tween these categories, the independence of the other dimensions is not questioned. However, a more critical analysis of Glock and Stark's work by Clayton (1971) and Clayton and Gladden (1974) suggested that all of the dimensions, with the possible ex­ception of a consequential scale, might re­ ally be measuring aspects of religious be­lief.

In contrast, the extensive research pro­ gram conducted by King and Hunt (1975) has offered strong corroboration for the multidimensionality claimed by Glock and

Glock and Stark's dimensions of religious commitment measures are an important element in the evolution of socio­ logically oriented attempts to measure reli­gion. They represent the growing realization in the 1960s that religion was a complex phenomenon that demanded a multidimen­sional approach to its measurement. Influ­enced by earlier work of Gerhard Lenski, Glock and Stark approached the issue of creating religious measures by identifying the important components or dimensions of religion. For each of these dimensions they created a set of survey questions that could be combined into indices. The following di­mensions of religiosity produced these in­ dices:

Glock and Stark's dimensions of reli­gious commitment measures can be viewed as a pool of survey items that could be used by researchers studying religion. As Glock and Stark themselves demonstrated, one might not need to use all the possible items that are available. Furthermore, if only cer­tain aspects of religiosity are deemed impor­tant to the research, then one or more of the indices could be used independently. Care should be taken not to claim that religion is being measured comprehensively. Others have followed essentially the same basic framework but have created different spe­cific items (Faulkner & Delong, 1966; King & Hunt, 1969). One could compare the Glock and Stark items with alternatives and create a composite set of measures that suits exactly the needs of a particular study.

A major consid­eration with the use of a multidimensional set of religious measures is whether or not the precision gained in such an approach is necessary for the purposes of the study. Generally, including all of the Glock and Stark measures as part of a larger instrument would necessitate a fair amount of time for the subject to complete all the items. Re­ searchers would have to allow up to 30 min­utes for these items to be completed. In some cases fewer items could be used with an accompanying loss of precision.

The scoring procedure for the items is straightforward. The indices are simply con­ structed by assigning numbers to the possi­ble answers and summing the totals. An­swers deemed as indicating religiosity are assigned higher values and answers indicat­ing a lack of religiosity are not given any value. Thus the higher the total score, the more religious the respondent is on that par­ticular dimension.

In a number of cases Glock and Stark did not use all of the possible items created for a given dimension. In some cases, items were omitted because they were relevant only to a specific religious subgroup. In other cases, Glock and Stark found through index validation analysis that a smaller group of items served as well as a larger set of questions.

The 1966 publica­tion by Glock and Stark reports the results for two samples. The first was a 1963 study of over 3,000 church members drawn from 118 Protestant and Roman Catholic congre­gations in four counties in northern Califor­nia. The second sample was a national study (N = 1,976) that was part of a National Opinion Research Center (NORC) survey of the nation in 1964. The first sample com­pleted self-administered mail surveys and the second sample involved in-person inter­ views.

A major concern was to discover if the results of the regional study (California) would be similar to the national sample. Glock and Stark reported that the national data confirmed empirically the findings of - the regional study. Since publication of Glock and Stark's study other researchers have adopted some of the same measures. But there have been no systematically replicated studies of the exact same instrument. Nevertheless, Glock and Stark (1966) provides useful normative data to anyone using these measures.

No reliability data were re­ ported.

Extensive item intercorrelations were conducted to see if the various mea­ sures were logically connected. Individual items did, in fact, correlate well with the in­ dices that were created. In some cases Glock and Stark present product moment correlations for these correlations (range: .404 to .766); in other cases, they do cross tabulations between items and indices. Be­ yond item analysis, Glock and Stark do not offer any external validity checks. They re­ port data that can be intuitively confirmed such as differences between various denom­inations on religious orthodoxy, participa­tion, etc. For example, more theologically conservative Protestant groups such as Baptists demonstrate higher levels on the mea­ sures of religious orthodoxy.

We now tum to another part of religious life-religious belief. We are concerned to learn not only what people believe but also how important their beliefs are to them. We hope you will find that the questions allow you to express your own beliefs. If not, please write a comment next to any question that you would consider to be inappropriate.

31. Which of the following statements comes closest to expressing what you believe about God?
32. Which of the following statements comes closest to expressing what you believe about Jesus?
' 33. The Bible tells of many miracles, some credited to Christ and some to other prophets and apostles. Generally speaking, which of the following statements comes closest to what you believe about biblical miracles.
34. Please think about each of the religious beliefs listed below and indicate how certain you are that it is true according to these choices: Completely true, probably true, proba­bly not true, definitely not true
35. When you think of salvation, do you think primarily of being granted eternal life be­ yond the grave or do you think primarily of being released from sin and protected from evil in this life?
36. Please read each of the items listed below and decide whether you think it is:
38. Do you believe Jesus will actually return to the earth some day?
IF YOU THINK JESUS WILL DEFINITELY OR PROBABLY RETURN, PLEASE AN­ SWER THE FOLLOWING QUESTION:
How soon do you expect Jesus' return to happen?
39. What do you feel will probably happen to you after death? I feel that I will:
40. How certain do you feel about the answer you have just given?
41. How sure are you that you have found the answers to the meaning and the purpose of life?
So far, we have asked about your religious activities, your religious knowledge, and your re­ligious beliefs. The next series of questions has to do with your religious experiences, that is, with what feelings you may have had which you would think of as religious.
42. To begin, would you describe briefly any experience which you have had in your life which at the time you thought of as a distinctly religious experience.
43. Listed below are a number of experiences of a religious nature which people have re­ ported having. Since you have been an adult, have you ever had any of these experi­ ences, and how sure are you that you had it? Answer either: Yes, I'm sure I have; Yes, I think I have; or No
IF YOU HAVE ANSWERED NO TO ALL OF THE ABOVE, do you feel that it is pos­ sible for people to have religious experiences?

The following questions give attention to still another topic-the history of Christianity. Here we are interested to learn how church people view the events of early Christianity and the Reformation period.

Note: Most of the religiosity items are found on pages 1- 7 of the questionnaire (items 1-43). Information on index construction is also found in their book.