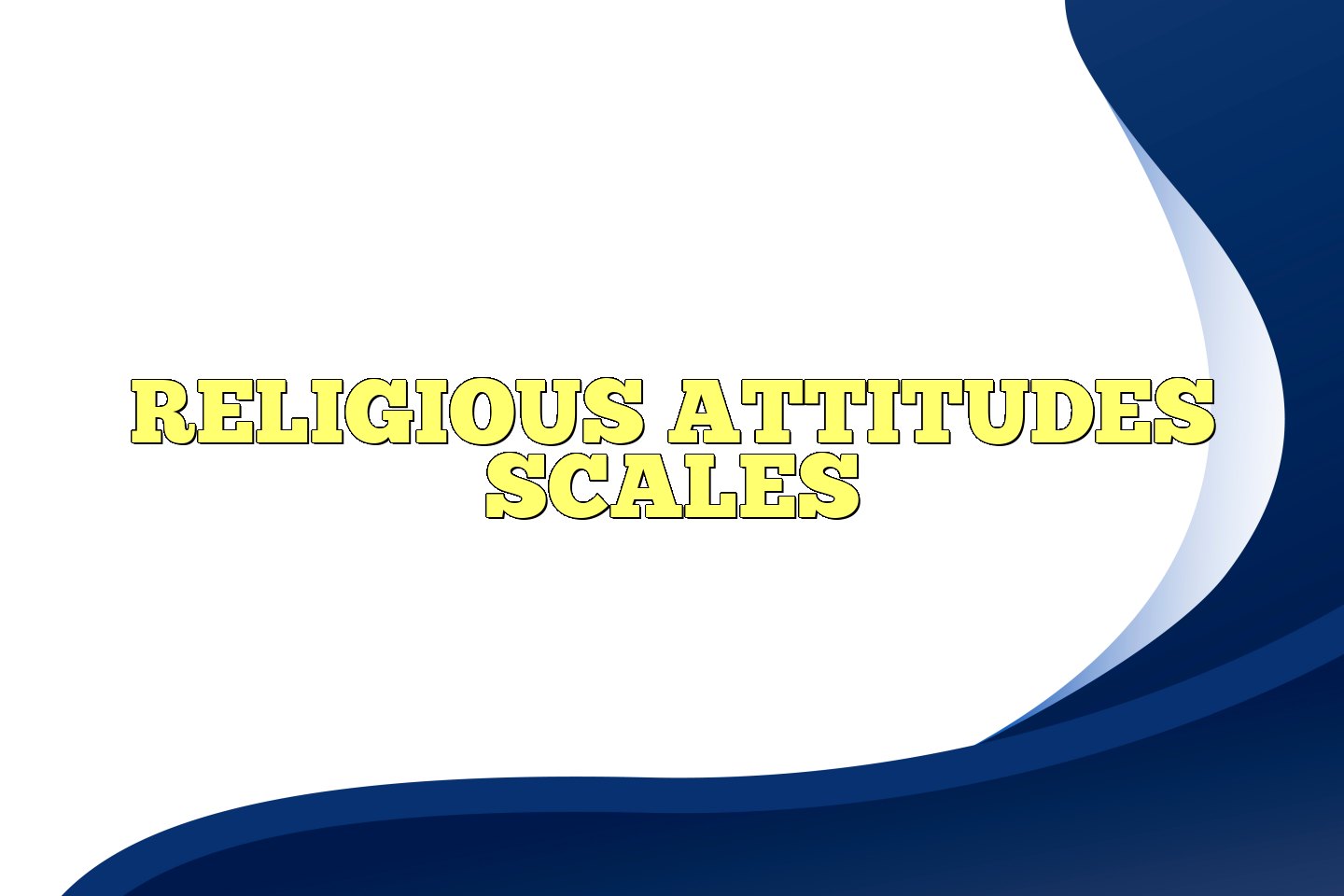 The Religious Attitudes Scales were designed to measure what are con­ceived of as eight dimensions of religiosity or religious attitudes: church orientation, rit­ualism, altruism, fundamentalism, theism, idealism, superstition, and mysticism. (1) Church orientation refers to positive atti­tudes toward and active involvement in the church, conceived mainly as a local institu­tion. (2) Ritualism gives primacy to formal worship services that are carried out with precision and orderliness. (3) Altruism con­ sists of concern for and helpfulness toward others and a corresponding valorization of the church's teachings against selfishness and individualism. (4) Fundamentalism is defined here primarily as biblical literalism and the conviction that the Bible is an infal­lible personal guide for living. (5) Theism designates an affirmation of the existence of God as a personal, omniscient, and omnipo­tent caretaker and guide. (6) Idealism is defined as an uncompromising dedication to ideals and principles apart from any theistic assumptions. (7) Superstition refers to belief in ordinary superstitions, in astrology and psychic phenomena, and in ultimately mys­terious spiritual forces. (8) Mysticism entails an affirmation of the possibility of ineffable knowledge of and union with God or some ultimate reality, which are thought to be at­tainable by means of silent waiting, meditation, or prayer.

Each of the eight dimensions is represented by a 12-item scale. Four of the statements on the Church Orientation Scale as well as four on the Altruism Scale were taken from Thurstone and Chave's (1929) Attitude Toward the Church Scale. Similarly, four items on the Superstition Scale were borrowed from the Fascism (F) Scale developed by Adorno, Frenkel­ Brunswik, Levinson, and Sanford (1950), and four on the Idealism scale were taken from still other sources. The scales may be individually administered or the 96 items may be randomly mixed, as the author him­ self chose to arrange them. Subjects respond to each item on a 5-point Likert scale that ranges from "strongly disagree" to "strongly agree," with the midpoint designated "unde­cided." Numerical equivalents to the five categories range from O to 4. Twenty­ three of the items are reversed in their word­ing; scoring of these items is thus likewise reversed. Scores on each scale range from 0 to 48. A total religiosity score can also be derived, by averaging the individual's eight scale scores. Maranell used this mean scale score only for an initial ordering of the eleven denominational groups he studied.

There is no fixed format required for the administration of this instrument. On some occasions, the 5- point response scale was printed after each of the 96 statements. At other times, a test booklet with the randomly arranged state­ments was accompanied by a standardized answer sheet that could then be easily scored with a set of eight templates.

Maranell recommends that, in randomiz­ing the questionnaire items, researchers should be careful not to begin the question­naire with negative statements that might damage rapport with certain subjects. Maranell gives no indication of the order he himself employed. Users will have to format their own versions of the question­naire and design their own scoring tem­ plates.

Because this in­strument was designed primarily for corre­lational and experimental research, no effort was made to develop formal norms for these scales. Yet Maranell (1974) does provide mean scores for various subject groupings, which were formed according to occupa­tion, dwelling area, house type, educational level, and region of the country. Thus he does offer some basis for interpreting indi­vidual scores.

Test-retest reliabilities were twice calculated for the eight scales, the first time with a one-week interval between administrations and the second time, using a different but likewise unspecified group of subjects, with an interval of one and a half weeks. In both cases the mean reliability co­ efficient-the coefficient of stability-was .87, with individual scales ranging in relia­bility from .68 to .99. Under both condi­tions, seven out of eight scales had reliabili­ties in the .80s or .90s.

To ensure the highest possible level of reliability and validity, Maranell constructed his scales using an item-analy­ sis technique developed by Allen Edwards. For each scale, Maranell selected for his two criterion groups those students who fell either in the top or in the bottom 25% of the distribution of total scores. He then com­ pared the item means for these two groups by using the statistic t, which measures the extent to which the two groups score differ­ently on the item. Edwards proposed a min­imum t of 1.75 for including an item on a scale; all of Maranell's 96 items meet this minimum requirement and t values typi­cally range much higher. Following Maranell, scale items are listed at the end of this review in descending order of t val­ues, which are listed to the right of each item.

Maranell asserts that the scale statements say what one would expect them to and thus that the scales have "face validity." Useful though this quality is for enlisting a sub­ject's cooperation, it does not assure us that the instrument genuinely measures the vari­ables after which its scales are named. Far more significant for assessing the scales' construct validity is the accumulation of re­ search evidence that Maranell lays out in the chapters of his book. He features in particular the pattern of denominational differ­ences that he found in a stratified random sample of clergy. On the total religiosity score, Catholic priests had a strikingly higher mean than the clergy in the other ten groups, and the Unitarian-Universalist min­isters had a notably lower one; the clergy of the remaining nine denominations were only slightly distinguished from each other. On the individual scales, a diversity of pat­ terns appeared. In some cases-the Ritual­ ism Scale, for example, on which the Catholic and Episcopal clergy stood out from the rest-the pattern seems to confirm that the scale measures more or less what it is supposed to. In other cases, however, the trends raise questions about the scale's pre­cise meaning.

On the Altruism Scale, to illustrate, the Catholic, Seventh Day Adventist, and Church of Christ clergy scored highest and the Lutheran, Episcopal, Presbyterian, and Unitarian-Universalist clergy scored lowest. While there may be some truth in Maranell's claim that these results reflect genuine differences in altruism resulting from exclusivistic tendencies or social class, an examination of the items on the Altruism Scale suggests that a high score does not re­flect "unselfish concern for others" per se, but the conviction that the church is vital for overcoming human selfishness and that the respondent is interested in the church mainly "because of its work for moral and social reform." It is telling that, for all of the subject groups, the Altruism Scale tends to correlate more highly with the Fundamen­talism Scale than with any of the others, in­cluding the Idealism Scale. Moreover, the Altruism Scale shows the same tendency to correlate positively with superpatriotic, au­thoritarian, and anticivil-liberty attitudes that appear for all of the other scales except Idealism. Only on anti-Black, anti-Semitic, and antiforeign attitudes does it consistently diverge from the others and join with the Idealism scale in opposition to these atti­tudes. And whereas the Idealism Scale cor­ relates -.78 with a measure of general mal­ adjustment, the Altruism Scale correlates a significant .37. This scale is obviously something more than a simple measure of altruism.

The Ritualism Scale, which shows an even stronger positive relation with politi­cally conservative attitudes than the Funda­mentalism Scale does, tends like some of the other scales to correlate positively with suggestibility, perceptual rigidity, anxiety, general maladjustment, dependency, and fa­naticism, and negatively with scholastic ap­titude, ego strength, and social desirability. Instead of representing a thoughtful appre­ciation for ritualization, as we find in the work of Erik Erikson (1977), the Ritualism Scale's emphasis on precision and orderli­ness tips the scale in the direction of what Erikson himself called ritualism, defined as a pathological distortion of playful ritual­ization. Thus any would-be user of Maranell's scales should carefully take into account the scale items themselves and the patterns of Maranell's findings instead of simply relying on the names of the scales.

Please use the following scale to indicate the extent to which you agree with each statement:

Note: Scoring for the items followed by (R) should be reversed.

Subsequent Research: Maranell's (1974) book-length work sums up a series of re­ search undertakings that were earlier re­ ported in the journal literature. The scales have apparently not been used subse­quently.

Thurstone, L. L., & Chave, E. J. (1929). The measurement of attitude: A psychophysical method and some experiments with a scale for measuring attitude toward the church. Chicago: University of Chicago Press.