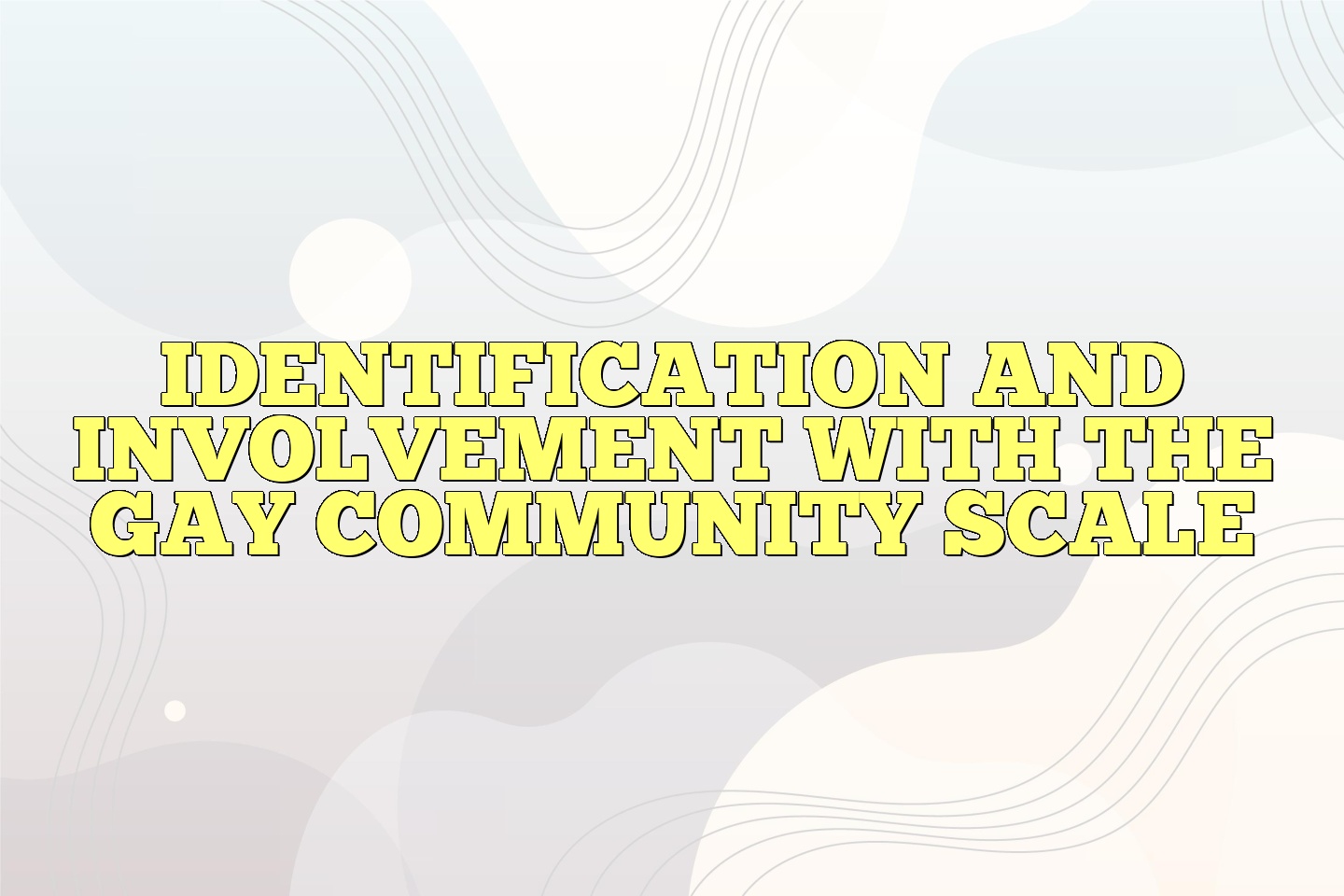 Identification and Involvement With the Gay Community Scale‌

The Identification and Involvement with the Gay Community Scale (IGCS) is designed to measure involvement with and perceived closeness to the gay community among men who have sex with men. Although bisexually and homosexually active men are often considered to be part of the same homogeneous group, there are substantial individual differences in the extent to which these men perceive themselves to be part of a larger gay community and in the degree to which they self-identify as gay (Stokes, McKirnan, & Burzette, 1993; Vanable, McKirnan, Stokes, Taywaditep, & Burzette, 1993). The IGCS was developed to characterize these individual differences. The scale was initially developed as part of a larger research program designed to identify both individual and community level variables associated with HIV risk behavior among a het- erogenous group of bisexually active men (see McKirnan, Stokes, Doll, & Burzette, 1995, for a description). Thus, although the construct tapped by this scale may be equally relevant to women who have sex with women, reliability and validity data have been gathered only for men.

The scale consists of a eight self-report items. Four items require respondents to rate how much their degree of agreement with attitude statements regarding the importance of self-identifying as gay and associating with a gay community. Response options range from completely disagree (1) to completely agree (5). In previous testing of this instrument, these four questions were embedded within a larger set of questions assessing attitudes toward sexuality and AIDS. Three items tap the frequency with which respondents read a gay or lesbian newspaper, attend gay or lesbian organizational activities, and frequent gay bars. The final item assesses the overall number of gay friends in the respondent’s social network.

An earlier version of this scale, focussing only on behavioral indices of involvement in the gay community, was described by Stokes et al. (1993). The present version, which includes subjective ratings of identification with the gay community, was initially tested using a face-to- face interview format in which responses were elicited by trained interviewers. In a more recent study (McKirnan & Vanable, 1995), the scale was administered using a self- report format, yielding similar psychometric properties.

Respondents are instructed to circle the response that most accurately describes their personal attitudes and experiences. The scale requires 2 to 3 minutes to complete.

Prior to computing scale scores, responses to questions 5 through 8 should be converted to numeric values (A = 1, B = 2, C = 3, D = 4, E = 5). Final scale scores are obtained by computing a mean across the eight items. Item 4 must be reverse coded. Higher scores indicate more identification and involvement with the gay community.

Reliability and validity data come from a large, diverse sample of bisexual and gay men living in the metropolitan Chicago area (N = 750). African-American (51%) and White (49%) respondents between the ages of 18 and 30 were recruited on the basis of specific sexual behavior criteria. During the first phase of the research, interviews were conducted with men reporting that they had both male and female partners within the past 3 years (n = 536). The remaining 214 men were recruited on the basis of having only male sexual partners in past 3 years. For the complete sample, 43% of respondents self-identified as bisexual, 48% self-identified as gay, and 7% self-identified as being straight (2% refused to provide a label).

The Cronbach alpha for the complete sample was .78. A subgroup of respondents (n = 218) completed a 1-year follow-up interview. Test-retest reliability for this subsample was .74.

In the sample described above, scores on the IGCS were positively correlated with 7-point Kinsey ratings of sexual orientation (r = .58, p <.0001) such that people with stronger involvement and identification with the gay community tended to rate themselves as more homosexual in orientation. Similarly, scores on the IGCS reliably differentiated between men who variously described their sexual orientation as either gay, bisexual, or straight (Ms = 3.09, 2.38, & 1.51); F(2, 733) = 159.0, p <.0001. In addition, men showing greater identification with the gay community were more “out” to others about their same-sex activity, were less self-homophobic, reported that their friends were more accepting of their sexual preferences, and were more oriented toward using gay bars as a social resource, rs = .53, –.35, .56, .47, ps <.0001. Similar construct validity data are reported by Stokes et al. (1993), using an earlier version of this scale.

Support for this research was provided through Cooperative Agreement Number U64/CCU506809-02 with the Centers for Disease Control and Prevention.

Identification and Involvement With the Gay Community Scale

Directions: This questionnaire concerns some of your general attitudes and experiences. For each question, circle the response that is most accurate for you personally. Answer the questions quickly, giving your first “gut reactions.”