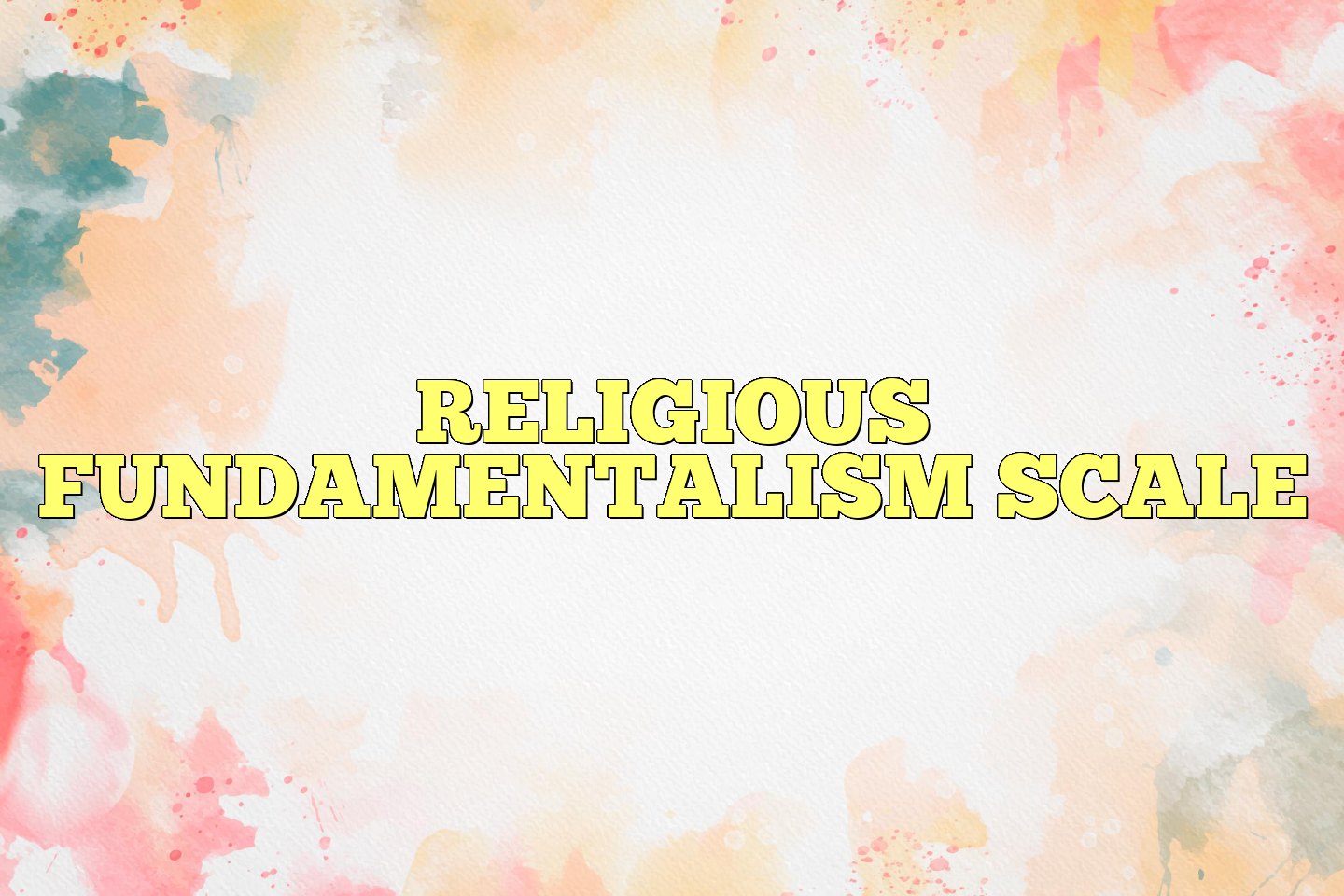 The RELIGIOUS FUNDAMENTALISM SCALE is designed to measure a "fundamentalist" way of holding and ex­ pressing one's religious beliefs. It is best to let the authors say, in their own words, what "fundamentalism" is intended to mean: "The belief that there is one set of religious teachings that clearly contains the fundamental, basic, intrinsic, essential, inerrant truth about humanity and deity; that this essential truth is fundamentally opposed by forces of evil which must be vigorously fought; that this truth must be followed today according to the fundamental, unchangeable practices of the past; and that those who believe and follow these fundamental teachings have a special relationship with the deity" (Altemeyer & Hunsberger, 1992, p. 118).

The important feature of the Religious Fundamentalism (RF) Scale is that its items are free of doctrinal content. Past scales designed to measure fundamen­talism included lists of doctrinal statements with which the adherent could express greater or lesser degrees of belief. Such measures confounded the content of one's beliefs with the mental process by which those beliefs are held. The RF Scale allows us to get beyond this problem because its items contain statements that can apply to many religions. Thus the RF Scale can mea­ sure the degree to which someone is reli­gious in a fundamentalistic sense, whether the person is a Christian, Muslim, Jew, or other. The measure opens the door for a whole new line of research.

The measure is theoretically and empiri­cally related to other constructs in ways that make sense. It is associated with overall right-wing authoritarianism and with each of its three components--conventionalism, submission to authority, and authoritarian aggression-and with Altemeyer's (1996) Dogmatism Scale. The measure is also cor­ related with degree of Christian orthodoxy, which suggests that some people who hold specific and traditional beliefs also hold them in a rigid way. It is clear, however, that there are also exceptions to these trends and the RF Scale taps an important, separate dimension (Altemeyer & Hunsberger, 1992).

The RF Scale comprises 20 items. Half of the items are worded in the con-trait di­ rection in order to control for a response-set bias. Each item is scored on a 9-point Likert scale for which the answer options range from "-4" to "+4" for the "very strongly disagree" and the "very strongly agree" an­swers, respectively. A neutral answer option of "O" is allowed. In order to eliminate neg­ative numbers and obtain the final score, which is the sum of the scores for the 20 items, the scores are reversed for the con­ trait items and a constant of five is then added to the raw scores. Total scores may range from a low of 20 to a high of 180, with a theoretical midpoint of 100.

The RF Scale takes approximately IO minutes to complete. No special training is required to administer the scale, and the scores are readily inter­pretable. Because the scale is nonsectarian, it is neutral with respect to specific doctrinal orientations and may be used within a variety of religious and academic contexts.

The initial samples on which test item selection and assessment of the scale's statistical properties were based included 463 students from Wilfred Laurier University in Ontario, Canada, and 235 students from the University of Mani­toba. Nearly all participants had been raised in Christian faiths. Additional data came from the parents (247 mothers and 244 fa­thers) of introductory psychology students at Manitoba. For the parent study, the over­ all mean RF score was 84.6, with a standard deviation of 33.0.

Examination of the content of the items suggests that the questions on the scale represent the aspects of belief that are imbed­ded in the authors' conceptual definition of fundamentalism. Moreover, the RF Scale has been found to correlate with other measures in ways that would be expected based on the construct that it is intended to measure. For example, in various samples RF has corre­lated between .66 and .75 with the Right­ Wing Authoritarianism Scale (Altemeyer, 1988). It has also been found to correlate from .60 to .75 with the Christian Orthodoxy Scale (Fullerton & Hunsberger, 1982), .57 t with the Dogmatism Scale, .30 with a measure of prejudice, .41 with an anti homosexuality scale, and -.79 with a balanced measure of religion as a quest. Furthermore, a group of 20 fundamentalist Protestants had a mean score of 130.6, significantly higher than several other religious groups (Altemeyer & Hunsberger, 1992). Exploring the robustness of the RF Scale by testing it with non-Christ­ian religious people, Hunsberger (1996) re­ ports correlations of .42 to .65 between RF and anti homosexual attitudes for Hindus, Muslims, Jews, and Christians. Overall, al­ though the scale is fairly new and the data­ base is still being assembled, the available data point strongly to the scale's validity.

This survey includes a number of statements about general religious opinions. You will prob­ ably find that you agree with some of the statements and disagree with others, to varying ex­ tents. Please indicate your reaction to each of the statements by marking your opinion to the left of each statement, according to the following scale:

If you feel exactly and precisely neutral about a statement, mark a "O" next to it.

Note: The higher the score, the more fundamentalist the response. * = con-trait item, for which the --4 to

Altemeyer, B., & Hunsberger, B. (1992). Au­ thoritarianism, religious fundamentalism, quest, and prejudice. The International Journal for the Psychology of Religion, 2, I 13-133.

Hunsberger, B. (1996). Religious fundamental­ ism, right-wing authoritarianism and hostility to­ ward homosexuals in non-Christian religious groups. The International Journal for the Psychol­ ogy of Religion, 6, 39-49

Hunsberger, B., Pratt, M., & Pancer, S. M. (1994). Religious fundamentalism and integrative complexity of thought: A relationship for existential content only? Journal for the Scientific Study of Re­ligion, 33, 335-346.