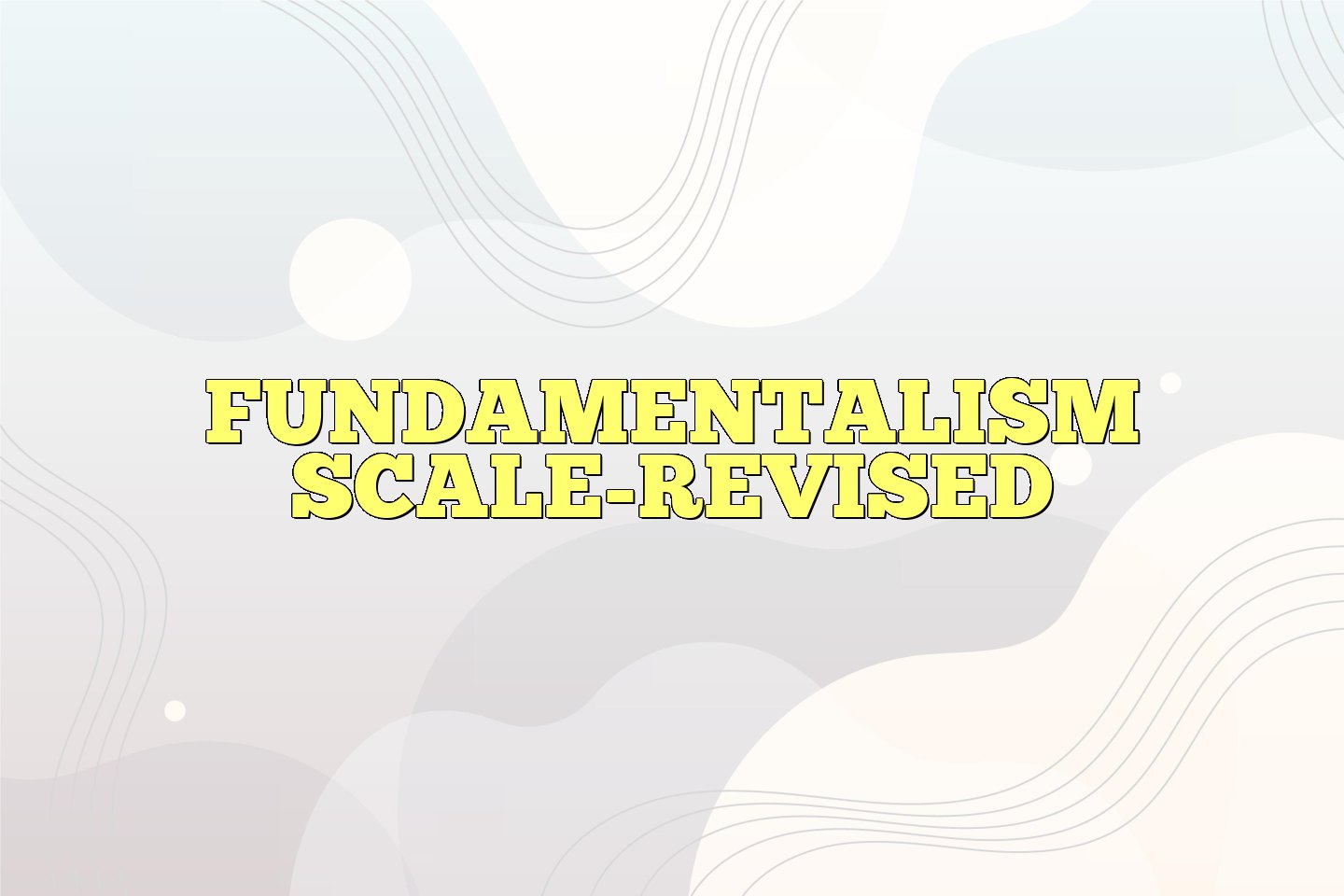 The Fundamentalism Scale was revised from the Religious Attitude Inven­tory developed by William E. Broen (1957a; (also reviewed in this volume). Items per­taining to this measure assess the extent to which one subscribes to the orthodox tenets of the Christian faith with an emphasis on a literal interpretation of the Bible as the word of God, the essential sinfulness of man, and the need for and rightful fear of a punishing God. Individuals scoring low on this scale would tend to adopt a more liberal view of the Scriptures and a humanistic view of the human condition, with persons having the ability to realize their innate potential through their own efforts apart from God.

Gorsuch and three of his grad­uate students reviewed all of the fundamentalism/nonfundamentalism items in Broen's (1957a) original scale (see 8.9 in this vol­ume for a review of Broen's instrument). They retained only those items that they could unanimously agree on as retaining face validity or relevance with regard to the religious trait of fundamentalism (33 items in all from Broen's original 58). Respon­dents simply note whether they agree or dis­ agree with a series of statements.

The instrument is relatively straightforward and easily admin­istered in a variety of settings. The scale is useful for both religious and nonreligious groups, although the instrument generally assumes a Christian orientation. In terms of scoring, Gorsuch simply added up the number of fundamentalism items with which the respondent agreed. For those fundmamen­talism items that are reverse worded (de­ noted by an asterisk in the scale), disagree­ing with that statement increments the total score by one.

In an unpublished study, Gorsuch administered his selected portion of Broen's fundamentalism items in the Religious Attitude Questionnaire to 50 students (32 males, 18 females) at Texas Christian University. The mean score on the Fundamentalism Scale was 15.34 (SD = 5.12). Gorsuch and Smith (1983) adminis­tered their revised version of Broen's origi­nal instrument to 164 undergraduate stu­ dents who were taking social science, nursing, and religion courses at a small Christian college. The Fundamentalism Scale mean was 23.94 (SD = 5.29).

Reliability coefficients are un­ available for Gorsuch and Smith's (1983) 33-item Fundamentalism Scale. However, in an unpublished study, Gorsuch adminis­tered Broen's Religious Attitude Inventory to 50 students (32 males, 18 females) at Texas Christian University. The interitem consistency coefficient for all of the funda­mentalism items in Broen's instrument was 0.76 (K-Richardson formula), which would give some indication of what might be ex­pected with Gorsuch and Smith's version.

No validity measures are available for Gorsuch and Smith's (1983) version of the Fundamentalism Scale. The following might give some indication of the construct validity of this measure. In an unpublished study, Lawrence Wrightman and a student administered Broen's Religious Attitude In­ventory to college students attending Bel­mont College, Wheaton College (Wheaton, IL), and Central Michigan University. They then correlated both the "Nearness to God" and "Fundamentalism" scores with scores from the Dimensions of the Philosophies of Human Nature Scale developed by Larry Wrightman. For male students at Central Michigan University, scores on the Fundamentalism Scale were significantly corre­lated with how negatively one viewed human nature (r = 0.32), with the extent to which one viewed persons as being less than altruistic (r = 0.31), and with the extent to which one viewed persons as being less than independent agents (r = 0.36). Students at Wheaton College had a significant correla­tion between fundamentalism and indepen­dence (lack of) domain of their views on human nature (r = 0.29). The findings were similar for the female students.

Directions: Circle the A if you agree with a statement, and circle the D if you disagree with the statement. Make a choice for each statement. Do not spend too much time on any one statement. We realize the difficulty a person who does not believe in the existence of a God might have in answering a statement such as "God watches over us." (Disagree might be in­terpreted as meaning that "there is a God who does not watch over us.") If you do not believe in the existence of a God, show your disagreement with the concept by circling the disagree when you come to such a statement.