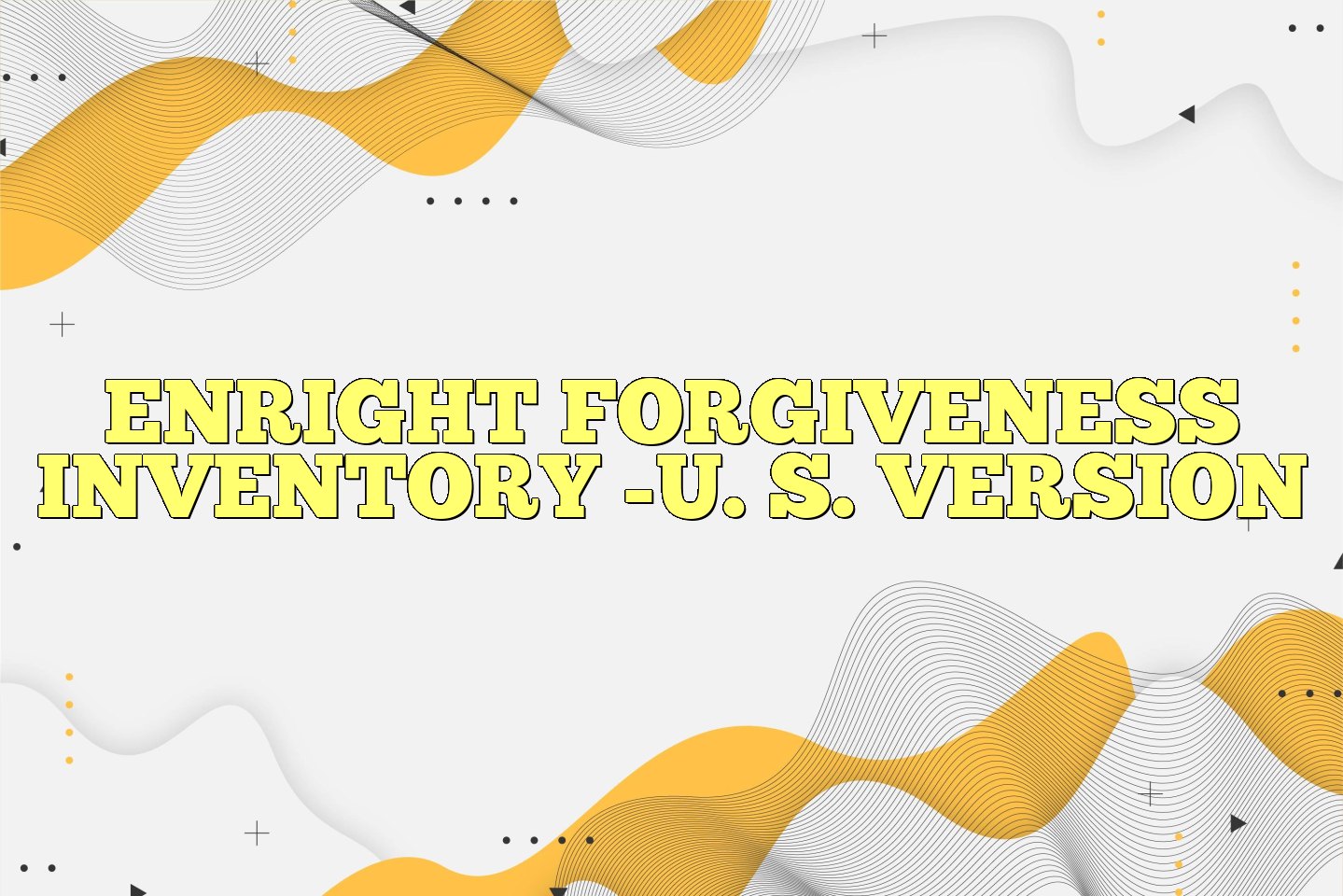 The Enright Forgiveness Inven­tory -U. S. Version (EFI-US) was developed to measure the degree to which the respon­dent has forgiven a particular target person (e.g., a particular friend, family member) who has hurt or offended the respondent. Forgiveness is conceptualized as a multidi­mensional construct involving cognitive, af­fective, and behavioral components.

Subkoviak et al. (1995) define forgive­ ness as the overcoming of negative affect, judgment, and behavior toward an offender and the presence of positive affect, judg­ment, and behavior toward an offender. These changes occur in the face of considerable interpersonal hurt. On this basis, Subkoviak et al. measure forgiveness with six subscales designed to measure the spe­cific dimensions included in their definition of forgiveness: (l-3) Absence of Negative Affect, Negative Judgment, and Negative Behavior; and (4-6) Presence of Positive Affect, Positive Judgment, and Positive Be­havior toward an Offender.

Subkoviak et al. (1995) see forgiveness as a universal construct that should apply to persons from all cultures and religious backgrounds. They have collected data in Brazil, Israel, Korea, Saudi Arabia, Taiwan, and the United States. The following review examines the scale and the norms that have been developed based on their U. S. sample.

Items are scored on a 6-point Likert-type scale (1 = strongly disagree, 2 = disagree, 3 = slightly disagree, 4 = slightly agree, 5 = agree, and 6 = strongly agree). Items on the absence of affect, cognition, and behavior scales are reversed scored so that higher scores on all subscales indicate greater for­giveness. Items can be summed in two ways. First, items on each subscale can be summed to derive a set of six subscale scores, with scores ranging from 10 to 60. Second, all 60 items can be summed (after the negative items have been reverse scored) to derive a total score, with scores ranging from 60 to 360.

This paper­ and-pencil measure requires no special qualifications to administer. Respondents are simply directed to think of a person who has seriously offended or hurt them, and then to indicate their agreement with items that indicate the degree to which they have experienced certain feelings, thoughts, or behavioral intentions regarding the of­ fender.

Data to investigate the validity of the EFI-US were gathered in several days. First, the subscales were correlated with each other. The subscales were highly inter­ correlated, with correlation coefficients ranging from .80 to .87.

Second, the subscales were correlated with a single-item measure of the degree to which respondents had forgiven the person that they rated as they completed the instru­ment. ("To what extent have you forgiven the person that you rated?") The EFI-US subscales were moderately correlated with this single item, (Pearson r's from .60 to .68). Subdoviak et al. (1992) indicate that coefficients of this size are impressive, given that one of the variables was a single­ item measure with limited reliability. Third, the EFI-US scales were correlated with the Crowne-Marlowe (1960) social desirability scale.

Fourth, Subkoviak et al. (1995) hypothe­ size that forgiveness should lead to reduced anxiety in relationships that are particularly intimate or developmentally significant. On this basis, they reason that an instrument that purports to measure forgiveness should be correlated with indices of mental health. Subkoviak et al. correlated the EFI-US with measures of anxiety and depression, hypoth­esizing that forgiveness should lead to improvements in these psychological symp­toms. They found that the EFI total score had a small and negative correlation with anxiety for their total sample (r = -.15). For respondents in their sample who reported that the interpersonal offense that they encountered had initially caused a great deal of hurt, forgiveness had a larger negative correlation with anxiety (r = .25). For mar­ried respondents who rated their spouses, forgiveness was moderately and negatively correlated with trait anxiety (r = .53) and state anxiety (r = -.44). Correlations of anx­iety with other particular subsets of their sample were also conducted, yielding some support for their hypothesis that forgiveness should be conductive to mental health.

Subkoviak et al. (1995) found no signifi­cant relationship between the EFI and the Beck Depression Inventory for the total sample. However, they did find that among the adult sample, the negative affect sub­ scale of the EFI was negatively correlated with depression among those respondents who had reported that they had received a great deal of hurt from a family member.

Additional support for the instrument's validity comes from McCullough (1995), who found that the participants in a week­ end seminar designed to encourage forgive­ ness had significantly higher EFI total scores following the intervention than did participants in a waiting-list control group. These findings suggest that the EFI might be valuable for investigating the efficacy of interventions that are designed to promote interpersonal forgiveness.

The following six items are sample items, one for each subscale. Items are answered on a 6- point Likert Scale ranging from zero ("strongly disagree") to five ("strongly agree"). The en­tire scale is available through Robert D. Enright, Ph. D., Dept. of Educational Psychology, University of Wisconsin, Madison, WI 53706-1796.