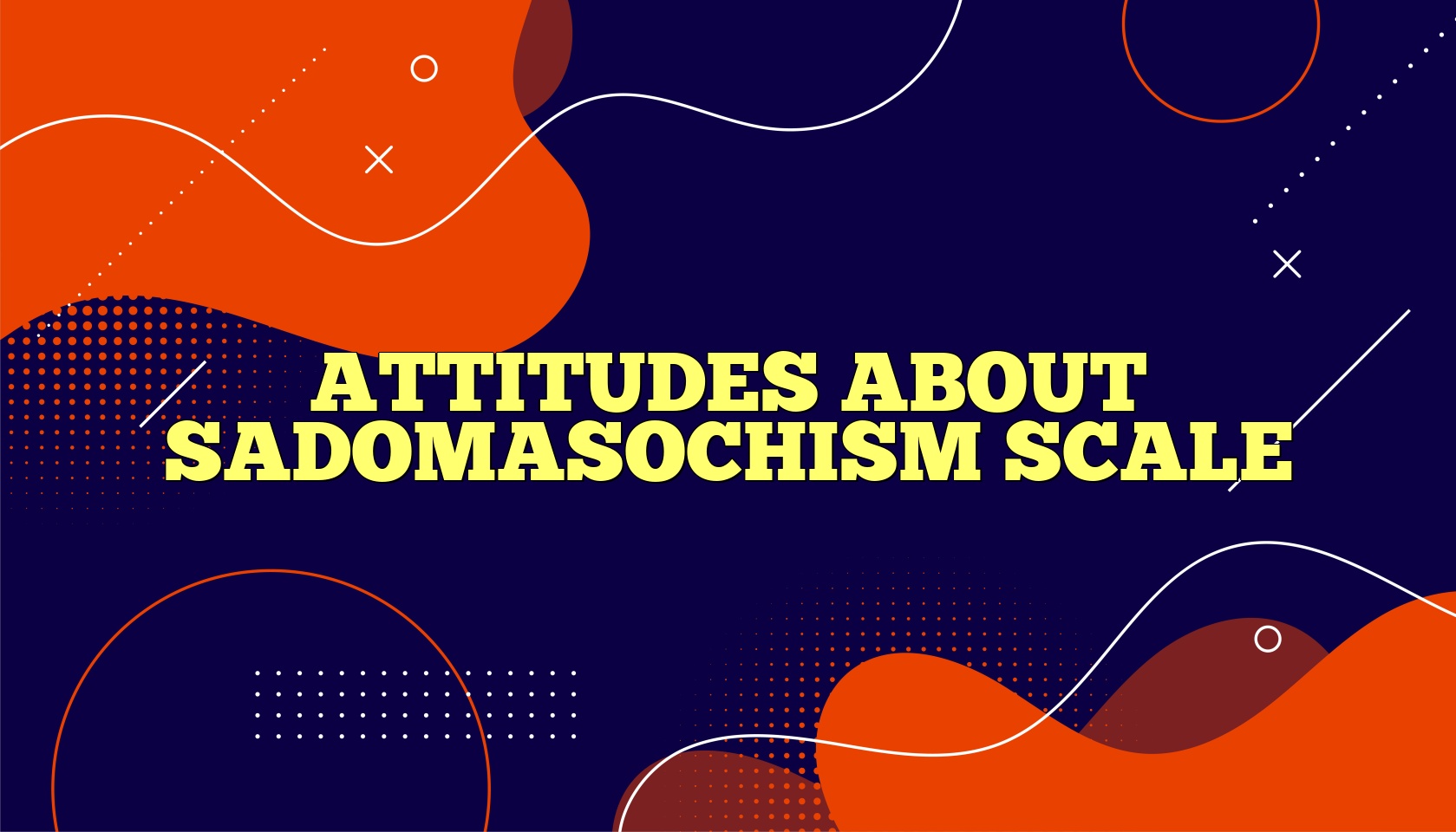 The Attitudes About Sadomasochism Scale (ASMS; Yost, 2010) assesses stereotypical and prejudicial attitudes about individuals involved in consensual, sexual sadomasochism. Sadomasochism (SM), in this context, refers to the safe and consensual sexual activities of an adult subculture that practices bondage, discipline, domination, submission, sadism, and masochism as part of their sexual interactions (Scott, 1980; Weinberg, Williams, & Moser, 1984). Many SM activists claim that identifying as a sadomasochist is similar to identifying as a lesbian, gay man, or bisexual, in that SM is an identity that defines their sexuality and their preferred manner of sexual interaction (Taylor & Ussher, 2001). Others argue that SM is best conceptualized as a set of sexual practices or activities, with no implication for identity (Langdridge, 2006). In either case, prejudicial attitudes about such individuals have begun to be documented (Wright, 2006), just as prejudice and discrimination against individuals based on sexual orientation have been well documented over the past few decades (Herek & Capitanio, 1996).

Psychotherapists reporting discomfort working with clients who engage in SM (Ford & Hendrick, 2003), and reports of therapist bias from SM practitioners seeking therapy (Kolmes, Stock, & Moser, 2006), indicate a need for greater understanding about SM within the mental health professions. Furthermore, recent custody cases in which a parent’s involvement in SM is used as evidence of unfit parenting (Klein & Moser, 2006), and raids in which police charge consenting adults with lewd behavior, nudity, and assault for engaging in SM in semiprivate settings (Ridinger, 2006), demonstrate anti-SM bias in the legal system.

The ASMS is a multidimensional measure of prejudicial attitudes about sadomasochism, which provides a reliable and valid means of assessing such prejudice. It is a useful tool to examine the prevalence of anti-SM attitudes, particularly among populations that come into contact with SM practitioners in settings where discriminatory attitudes could have serious consequences. By using the ASMS to survey these attitudes, educational programs could specifically address the anti-SM bias held by psychotherapists, lawyers, judges, and the police. More broadly, this measure is a useful tool for sex researchers and social scientists interested in discrimination against sexual minorities.

The ASMS is a 23-item measure that was developed using a sample of 213 participants and validated using a sample of 258 participants. In the first sample, 58 items were administered and explored through factor analysis. After deleting items that lacked variance or loaded highly on multiple factors, an exploratory factor analysis yielded four subscales: Socially Wrong (the belief that SM behavior is morally wrong and socially undesirable); Violence (linking SM activity to violence against an unwilling partner); Lack of Tolerance (suggesting that SM can be an acceptable form of sexuality among willing partners [reverse scored]); and Real Life (the belief that SM practitioners carry their SM interests into their daily lives). Confirmatory factor analysis using a second sample further supported the structure of the ASMS, with fit indices above .90 indicating that the four-structure model adequately fit the data.

Response options range on a Likert-type scale from 1 (Disagree Strongly) to 7 (Agree Strongly) with a neutral midpoint of 4 (Neither Agree nor Disagree). The instrument can be completed in 10 minutes.

So that higher scores indicate negative attitudes about SM or SM practitioners, the four items phrased in a positive direction (all items in Lack of Tolerance) are first reverse coded. Then items within each subscale are averaged to form a subscale score.

Validation analyses using all 471 participants showed that the ASMS demonstrated good concurrent validity at the subscale level by correlating in expected ways with other established scales. All subscales were positively correlated with prejudicial attitudes about lesbians and gay men, and with a measure of general sexual conservatism, suggesting that prejudicial SM attitudes are an extension of more general sex-negative attitudes. The Socially Wrong subscale was most strongly correlated with a measure of right-wing authoritarianism, which would be expected given that the items in this subscale are closely related to moral judgments and society’s role in maintaining order. Lastly, the only subscale significantly correlated with a measure of rape myths was Violence, showing that participants who supported inaccurate beliefs about rape (such as blaming the victim) also believed inaccurate statements associating SM with rape.

However, a multiple regression analysis showed that over half of the variance in the ASMS (58%) remained unexplained by the four established scales, indicating that the ASMS measures specific attitudes about SM and SM practitioners that cannot be accounted for by social and sexual conservatism alone. In other words, the ASMS captures a set of attitudes specific to SM that do not overlap with already-developed attitudinal scales.

Finally, the ASMS demonstrated validity through its ability to discriminate between groups of participants (based on their prior knowledge of SM, their self-identifi- cation as being involved in SM, and friendships with SM practitioners). The more participants knew about SM prior to this study, the more positive their attitudes, consistent with the idea that knowledge creates a more accurate perception of SM practices. Also, participants who identified themselves as involved in SM had more positive attitudes, consistent with social psychological research on in-group favoritism showing that group members perceive others in their group in positive terms, even if the group is stigmatized in the broader society (Frable, Platt, & Hoey, 1998). Lastly, participants who had a friend who was involved in SM also had more positive attitudes, consistent with the contact hypothesis of stigma reduction (Allport, 1954), which explains that positive attitude change occurs when intergroup contact takes place under optimal circum- stances.