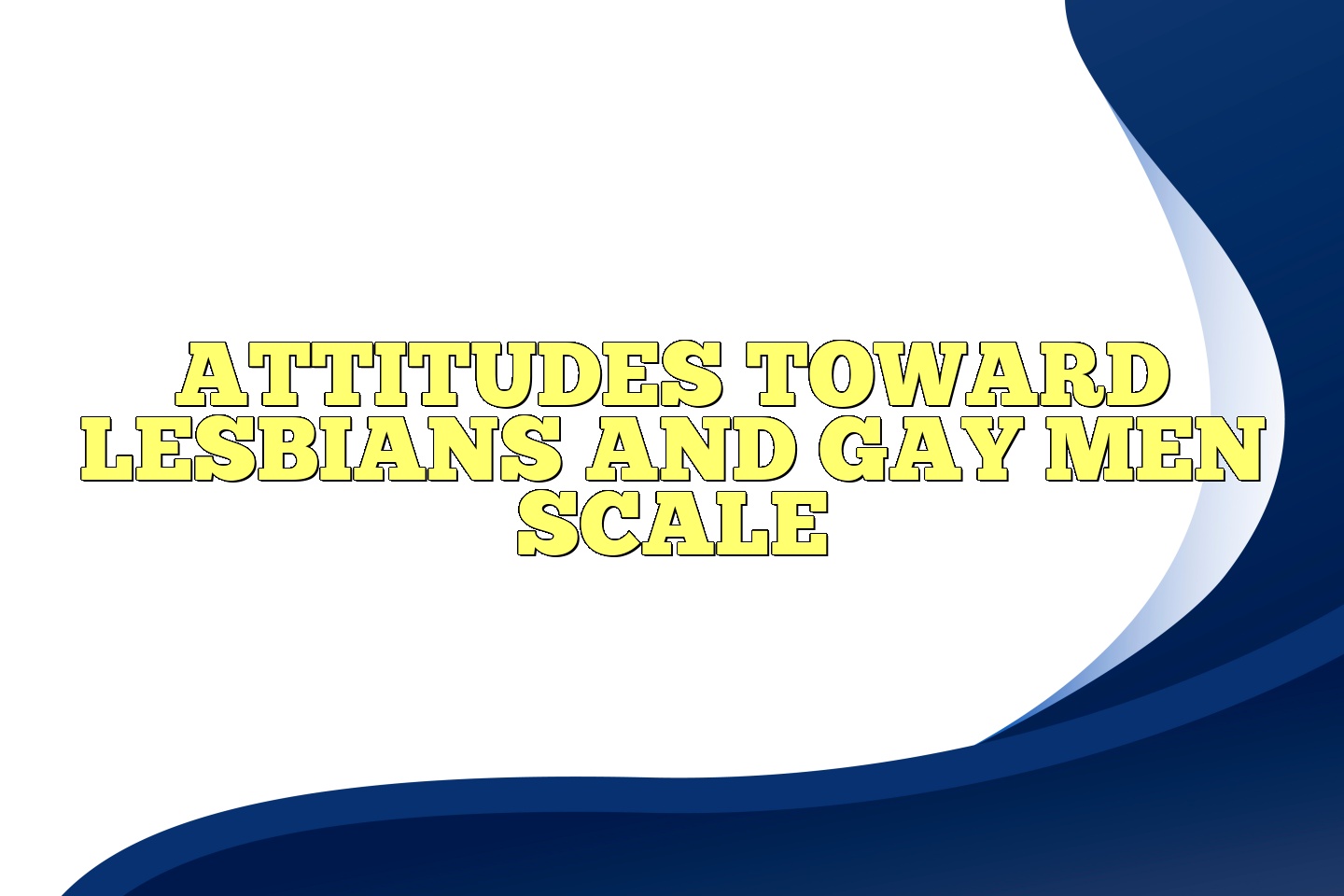 GREGORY M. HEREK1 AND KEVIN A. MCLEMORE, University of California at Davis

The Attitudes Toward Lesbians and Gay Men (ATLG) Scale is a brief measure of heterosexuals’ attitudes toward gay men and lesbians. The original scale consisted of 20 different statements, 10 about gay men (ATG subscale) and 10 about lesbians (ATL subscale), to which respondents indicated their level of agreement or disagreement. Shorter versions have subsequently been developed, consisting of ATG and ATL subscales with parallel versions of 3, 4, or 5 items. These shorter versions have been found to be highly correlated with the original, longer subscales (e.g., rs >.95 between 5-item versions of the ATG and ATL and their 10-item counterparts), and their use is now recommended instead of the original subscales.

The ATLG can be self-administered (presented on paper or on a computer) or administered orally (as in a telephone survey). When presented visually, scale items are typically accompanied by a 5-, 7-, or 9-point Likert-type scale with anchor points of Strongly Disagree and Strongly Agree. When administered orally during telephone or face-to- face interviews, four response options are usually offered (Strongly Disagree, Disagree Somewhat, Agree Somewhat, Strongly Agree), and respondents are allowed to volunteer a middle response (e.g., “Neither Agree nor Disagree”). Completion time is roughly 30–60 seconds per item.

Scoring is accomplished by assigning numerical values to the response options (e.g., for a 7-point response format, 1 = Strongly Disagree, 7 = Strongly Agree) and summing across items for each subscale. Some items are reverse scored as indicated below. For ease of interpretation, the sum of item values can be divided by the total number of items to yield a score that matches the response scale metric. The possible range of scores depends on the response scale used.

Scores on the original ATL and ATG subscales, which are based on responses to differently worded items, were not directly comparable. Researchers wishing to compare respondents’ attitudes toward gay men with their attitudes toward lesbians were advised to use parallel forms of one subscale (usually the ATG items). The use of such parallel forms (with each item presented once in reference to gay men and once in reference to lesbians) is now recommended for all ATLG scale users, as shown in the Exhibit.

The ATLG subscales have high levels of internal consistency. When self-administered, α > .85 with most college student samples and α > .80 with most nonstudent adult samples. For telephone surveys with oral administration to adult samples, α > .80 for 5-item versions and α > .70 for 3-item versions. Test-retest reliability (rs > .80) has been demonstrated with alternate forms (Herek, 1988, 1994).

Scores on the ATLG subscales are reliably correlated with other theoretically relevant constructs (e.g., Herek, 1994, 2009; Herek & Capitanio, 1996, 1999a). Higher scores are associated with high religiosity, lack of inter- personal contact with gay men and lesbians, adherence to traditional gender-role attitudes, belief in a traditional fam- ily ideology, and endorsement of policies that discriminate against sexual minorities. In addition, ATG scores are reliably correlated with AIDS-related stigma.

The ATLG’s discriminant validity also has been established. Members of lesbian and gay organizations scored at the extreme positive end of the range, and nonstudent adults who publicly supported a gay rights ballot measure scored significantly lower on the ATLG than did community residents who publicly opposed the initiative (Herek, 1988, 1994).

Administration in Other Languages and Outside the United States

Although the ATLG was originally developed for administration to English-speaking heterosexual adults in the United States, it has also been used in research conducted in England (Hegarty, 2002) and Canada (Mohipp & Morry, 2004), and translated versions have been administered in the Netherlands (Meerendonk, Eisinga, & Felling, 2003), Singapore (Detenber et al., 2007), Brazil (DeSouza, Solberg, & Elder, 2007), Chile (Cardenas & Barrientos, 2008; Nierman, Thompson, Bryan, & Mahaffey, 2007), and Turkey (Gelbal & Duyan, 2006). In addition, a Spanish-lan- guage version was created for a study of California adults of Mexican descent (Herek & Gonzalez-Rivera, 2006). In these studies, scale reliability has been consistently accept- able (typically, α > .80), and the patterns of correlations between ATLG scores and theoretically related constructs have been similar to those obtained with U.S. English- speaking samples.

Item order effects have been observed among heterosexual males in telephone surveys, which may indicate a gender- linked pattern in heterosexuals’ attitudes (Herek, 2002; Herek & Capitanio, 1999b). For more information about the ATLG’s development and usage, see Herek (1994, 2009). Researchers need not obtain the author’s permission to use the ATLG in not-for-profit research that is consistent with the American Psychological Association’s Ethical Principles of Psychologists.

Cardenas, M., & Barrientos, J. (2008). The Attitudes Toward Lesbians and Gay Men Scale (ATLG): Adaptation and testing the reliability and validity in Chile. The Journal of Sex Research, 45, 140–149.

Mohipp, C., & Morry, M. (2004). The relationship of symbolic beliefs and prior contact to heterosexuals’ attitudes toward gay men and lesbian women. Canadian Journal of Behavioural Science, 36, 36–44.

*This item is included in the 3-item version (ATLG-R) of the subscale.

Note. The Spanish-language version was adapted for use by Herek and Gonzales-Rivera (2006).

Component Measure of Attitudes Toward Homosexuality

Researchers have demonstrated that attitudes toward gay men and lesbians are multidimensional and that, to fully understand antigay prejudice, these different aspects of people’s attitudes and perceptions should be considered (see Kite & Whitley, 1996; LaMar & Kite, 1998). Because attitudes toward homosexuality can serve different functions for different people (Herek, 1986), antigay prejudice can best be understood by considering these differing perspectives. One attitude component reflects the general belief that homo- sexuality violates traditional values, for example, whereas another component reflects the possibility that people fear contact with gays and lesbians in general or sexual advances from a same-sex other specifically. These attitudes are sepa- rate from the stereotypic beliefs people hold about gay men and women and from people’s tendency to support or deny gay men and lesbians’ civil rights.

To construct this measure, established measures of attitudes toward homosexuality, summarized in Beere (1990), were reviewed. Initially, 174 items were selected that conceptually represented five components of attitudes toward homosexuality: Civil Rights, Condemnation/Tolerance, Contact, Morality, and Stereotypes. These items were categorized by component, and overlapping items were eliminated. For those categories not well represented by previous measures, new items were written.

A sample of 270 college students completed the measure, and their responses were analyzed using a varimax

factor analysis. Results revealed five factors that accounted for 56.8% of the variance. Most parallel items for lesbians and gay men loaded on the same factor; the exception was that the gay male and lesbian contact items emerged as separate factors. Contrary to expectations, civil rights did not emerge as a separate factor. Rather, those items loaded on the Condemnation/Tolerance factor, thereby resulting in four final components.

Correlations Among Subscales of Component Measure of Attitudes Toward Homosexuality

Note. All correlations are significant at p < .001. Reprinted from LaMar and Kite (1998), Table 2, with permission from Taylor & Francis.

Disagree. It is recommended that the item order be randomized and parallel items not appear contiguously on the measure. At administration, items from the four factors can be intermixed. However, each factor can be used as a stand- alone instrument to assess a specific component of attitudes toward homosexuality. The instrument takes approximately 15 minutes to complete.

Subscales are created for each of the 10 factors by first reverse scoring items that are worded negatively. Items that are reverse scored are marked on the instrument (see the Exhibit). Subscale scores are then created by averaging participants’ ratings on the items. LaMar and Kite (1998) reported correlations among the subscales. Correlations between the gay male and lesbian versions of the sub- scales are high for Condemnation/Tolerance (r = .90) and Morality (r = .91) and smaller for Contact and Stereotype (see Table 1).

Information concerning the internal consistency of the sub- scales is presented in the description of the development of the scale (see above). Additional information is provided in Table 1. Test-retest reliability of the measure has not been established.

To establish validity of the factors, LaMar and Kite (1998) compared mean subscale scores for each target sex for male and female respondents. Results showed that men evalu- ated gay men more negatively than they evaluated lesbians on both the Condemnation/Tolerance and the Morality subscales. On these two subscales, women respondents evaluated gay men and lesbians similarly. For the Contact subscale, men rated contact with gay men more negatively than contact with lesbians, and women rated contact with

lesbians more negatively than contact with gay men. There were no sex of respondent differences on the Stereotype subscale, but gay men were evaluated more negatively than lesbians on that subscale. These results provide support for the idea that attitudes toward homosexuality are multidimensional.

Component Measure of Attitudes Toward Homosexuality

Record your responses to each item using the following scale: