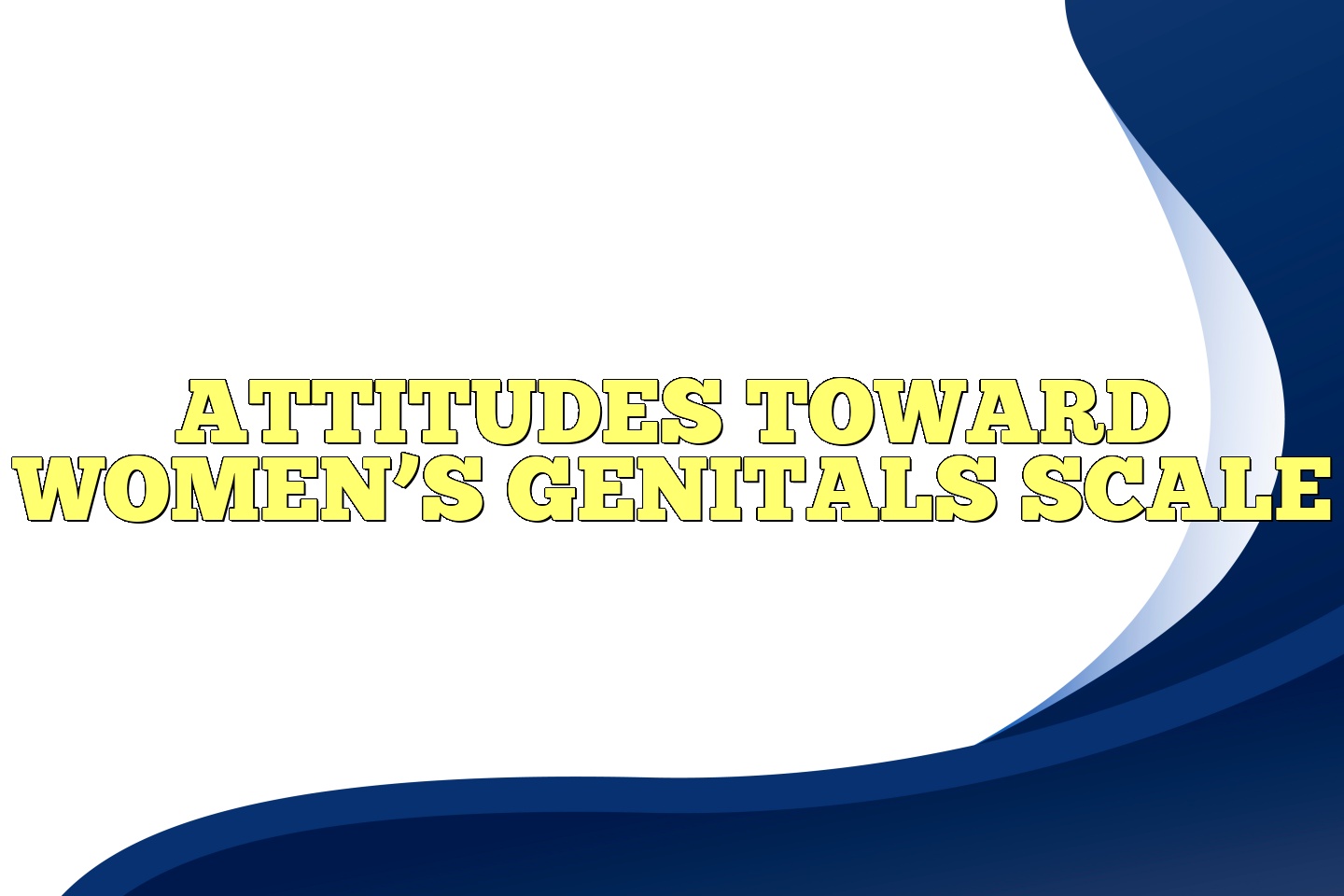 Women’s sexual and sexual health behaviors may be influenced by a range of factors including their perceptions of female genitals, such as whether vaginas are clean or dirty, attractive or unattractive, or whether they smell or taste pleasant. As an example, women who believe that vaginas generally smell bad or are “dirty” may avoid receiving cunnilingus or may avoid annual pelvic exams. The Attitudes Toward Women’s Genitals Scale (ATWGS) was designed with the intent to measure individuals’ perceptions of women’s genitals (Herbenick, 2006) rather than genital self- image, a concept that relates to how one perceives one’s own genitals, which is measured by other scales.

The ATWGS is a 10-item measure composed of statements with which respondents are asked to indicate their agreement or disagreement. The scale was developed in multiple stages. In Phase One, nine brief pilot surveys were completed by 370 women and men in order to elicit perceptions of women’s genitals using open-ended and closed- ended items. These data, in combination with a review of literature related to women’s genitals, were examined for

common themes. A total of 14 themes were found: genital appearance, vaginal birth, size in relation to function, menstruation, hygiene, pubic hair, smell, taste, communication, femininity, “looking” (e.g., either looking at oneself or allowing another to look), wetness, touching, and oral sex. Based on these themes, 101 items were written by the author and informed by feedback from a team of experts in the areas of gender studies, medicine, public health, psychology, and women’s sexuality. The items were then administered as part of a larger survey to 604 undergraduate and graduate students (362 women, 242 men; mean age

= 20.0) and, through an iterative process involving the use of reliability analysis, the scale was reduced to 10 items. Further research is recommended in order to understand the scale properties among other adult populations and clinical samples. The ATWGS may be particularly well suited for use in research that purports to understand how educational curricula or interventions can help to change attitudes toward women’s genitals over time. It may also be a useful measure among clinical samples of women who have experienced a change in their genital appearance or function, such as in samples of women with vulvar cancer or lichen sclerosus.

Respondents are asked to read a series of 10 statements and to indicate their agreement or disagreement using the response options of Strongly Disagree, Disagree, Agree, or Strongly Agree. Time to completion is typically less than 5 minutes.

In the initial testing of the scale, men scored significantly higher on the ATWGS, on average, than women (29.77 vs. 26.48, p < .001). Further research is recommended to understand the stability and consistency of these gender differences.

The following items are about people’s feelings and beliefs related to women’s genitals (both the vulva and the vagina). The world vulva refers to a woman’s external genitals (the parts that one can see from the outside such as the clitoris, pubic mound and vaginal lips). The word vagina refers to the inside part, also called the birth canal.

Please mark an “X” in the box to indicate how strongly you agree or disagree with each statement.

Herbenick, D. (2006). The development and validation of a scale to mea- sure college students’ attitudes toward women’s genitals. Unpublished doctoral dissertation, Indiana University.

Herbenick, D. (2009). The development and validation of a scale to mea- sure attitudes toward women’s genitals. International Journal of Sexual Health, 21, 153–166.