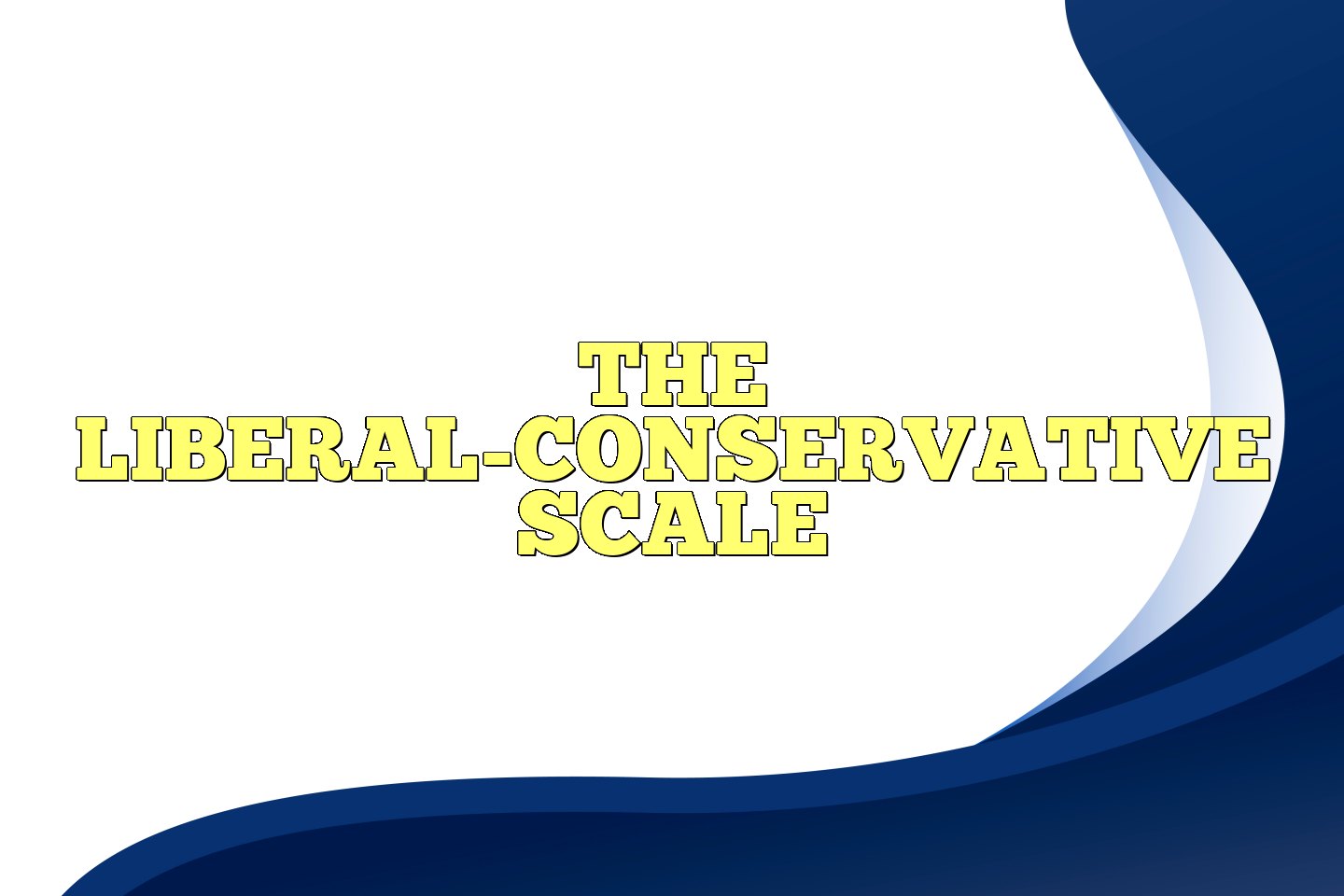 The Liberal-Conservative Scale measures attitudes of members of the Roman Catholic Church on two dimensions: liberalism (L) and conservatism (C). Catholics with liberal attitudes are charac­terized as advocating radical changes in religious practices and beliefs. Conversely, "conservative" Catholics seek to maintain traditional approaches to the Church. Coursey (1974) maintains that liberalism and conservatism are relatively consistent and strong dimensions that characterize members of the Catholic faith. The liberal­ conservative religious attitudes held by Catholics are similar to and consistent with liberal-conservative attitudes toward other areas of life.

In addition to the two main dimensions, this scale is broken down further into six subscales that measure the following fac­ tors: pious submissiveness, ecumenical atti­tudes, marriage issues, church rules, styles of worship, and social rights. The piety fac­ tor (subscale 1) measures loyalty and obedi­ence to authority and level of zeal for adher­ing to traditional recommendations for piety from the Church. The ecumenical attitudes factor (subscale 2) refers to the degree to which members see a need to close the church off to other religions. Coursey (1974) labels this factor the "Catholic ghetto mentality." Marriage issues (subscale 3) are primarily concerned with issues such as birth control, divorce, and celibacy of the clergy. The fourth subscale deals with main­taining or rejecting church regulations of a nontheological nature (e.g., appropriate dress for priests and nuns, and level of in­volvement of Church authority in Catholic education). Styles of worship (subscale 5) addresses issues involving changes in the Mass implemented as a result of recommen­dations made by the Second Vatican Coun­cil (1962-65), such as the celebration of Mass in English instead of Latin and the types of hymns allowed. The sixth factor, social rights, deals with the Church's in­volvement in social and political issues.

This scale was designed in re­sponse to the conflict within the American Catholic Church that arose following the declarations passed by the Second Vatican Council. Traditional (conservative) Catho­lics feared that introducing a large number of major changes in to the Church structure and worship format would lead to the down­ fall of Catholicism. More liberal Catholics welcomed and eagerly embraced the new changes. Coursey (1971, 1974) developed the L-C Scale in order to help psychologists and clergy better serve members of this once very unified denomination by placing their conflicting attitudes within a psycho­ logical framework.

This scale consists of 40 forced-choice items in a 4-point Likert-type format. Re­sponses range from "strongly agree" to "strongly disagree." Twenty of the items re­flect a liberal (L) attitude, and 20 advocate a conservative (C) stance. The L items are re­ verse scored. For each item, then, scoring is as follows: I = the most liberal response, 3 = no response to the item, and 5 = the most conservative response. A summary score is obtained by summing responses to each item. Scores can range from 40 (an ex­tremely liberal attitude) to 200 (an ex­tremely conservative attitude).

This scale is a self-administered paper-and-pencil measure.

The responses are easy to score and inter­ pret. No special skills or instructions are re­ quired to administer this scale. It was de­ signed for the average American Catholic layperson, with a ninth-grade education, since the items were pretested for under­ standing at this level.

One caution for using this scale, over 20 years after its initial development, is that the political climate of the Church has changed markedly since the early 1970s. Many of the issues addressed in the scale items, which were highly controversial immediately fol­ lowing Vatican II (e.g., casual dress for reli­gious leaders, mass celebrated in English, and guitar music at worship), may not distin­guish liberal from conservative Catholics today. However, some of the items do reflect ongoing controversial issues (e.g., marriage of priests, use of birth control, and abortion).

For both parishes, the average interitem correlation was .19 with a reliabil­ity estimate of .93. Individually, the parishes provided reliability estimates of .92. Factor reliability across time was established one year later with three additional factor analyses. L-C summary score correlated .32 with age, .29 with occupational level, and -.40 with education.

Ninety-eight potential items were originally generated for this scale. These items were examined by 10 judges from the sociology and theology departments at a Catholic college in order to establish face validity. In order for an item to be included in the scale, an 80% agreement among the judges about the item's liberal/conservative nature was required. Fifty-five items re­mained after this process.

The results of three studies were used to establish construct validity for this scale (Coursey, 1974). Several predictions about the nature of the liberal and conservative constructs were made. In the first study, it was predicted that members of a more con­servative parish would score higher on the L-C Scale than members of a more liberal parish. The mean scores for these two parishes (conservative parish: M = 171.04, SD = 34.34; liberal parish: M = 155.82, SD = 31.19) were significantly different (t = 5.85, p < .001) in the predicted direction.

It was predicted in the second study that students exposed to a liberally oriented edu­ cation would score lower on this scale than students who receive a more conservative education. In addition, it was also predicted that students with a longer exposure to a lib­erally oriented education would have more liberal scores than students with less expo­ sure to such an education. Two hundred eighty-six 9th and 12th grade students from four Catholic coeducational high schools participated in this study. A shortened high school version of the original 55 item scale was used. Consistent with the predictions, students from the more liberal schools scored lower than students from the less lib­eral schools. Also, the mean score for the 12th graders was significantly lower than the mean score for the 9th graders.

A third study used 98 matched pairs of individuals (matched on sex, age, vocational status, education, and income) from two samples to cross-validate the L-C Scale. The two samples were drawn from subscribers who read and endorsed either a liberal or a conservative Catholic journal. The 40-item L-C Scale was administered to the respon­dents. The overall summary score and the scores on the six subscales were all signifi­ؤantly different for the two samples in the predicted direction with p < .001.

Instructions: For each item below, state whether you "strongly disagree," "disagree," "agree," or "strongly agree."

Coursey, R. D. (1974). Consulting and the Catholic crisis. Journal of Consulting and Clinical Psychology,42, 519-528. Copyright © 1974 by the American Psychological Association.

Subsequent Research: No additional stud­ies that used the L-C Scale were located in the published literature since its initial de­ velopment.