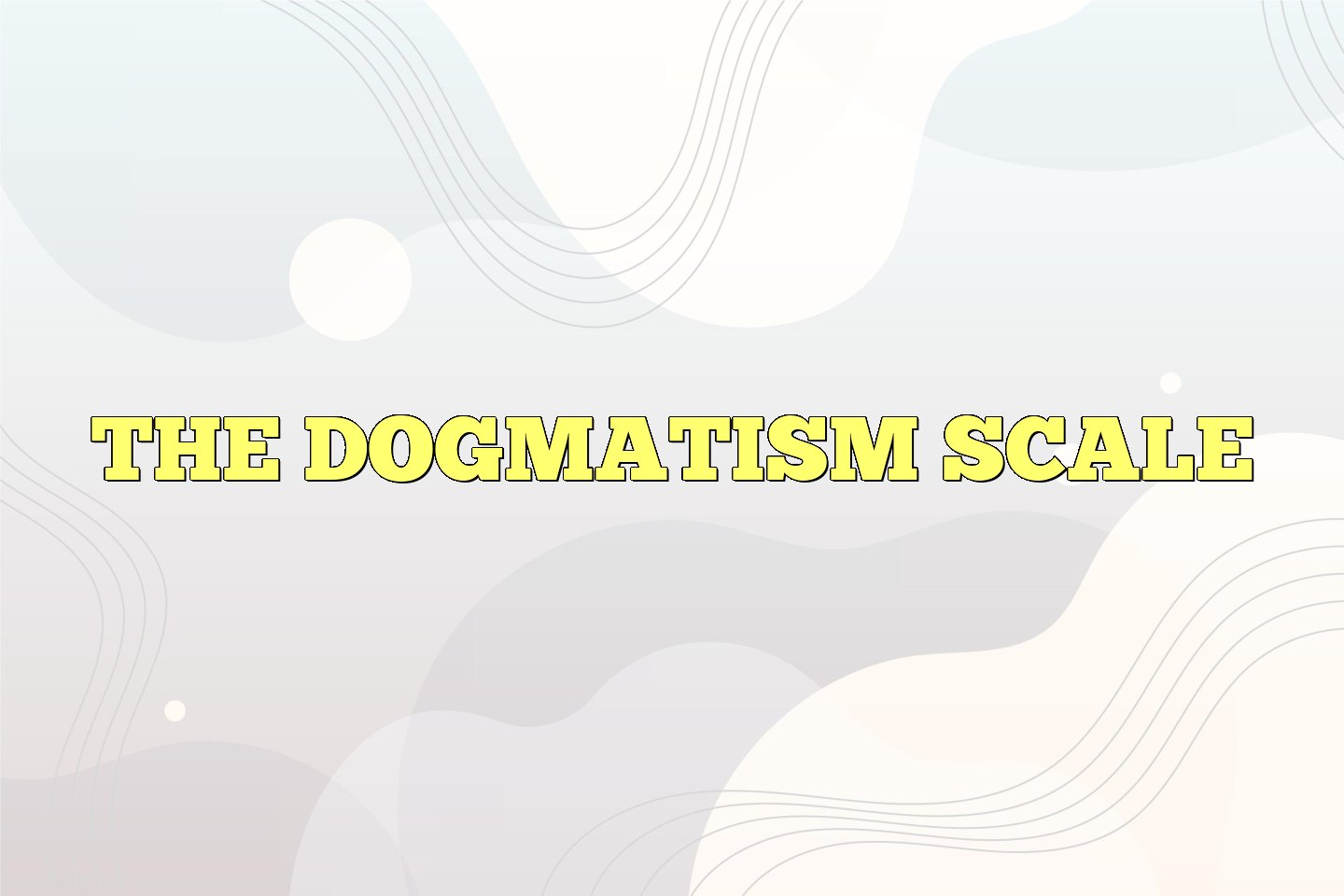 The Dogmatism Scale measures individual's belief systems on the dimen­sions of their relative openness or closed­ ness. According to this scale, people with closed belief systems are classified as dog­matic. They are characterized by viewing authority as absolute and the world as threatening (Rokeach, 1960). A person with a closed belief system is quick to reject any opinions or ideas that conflict with his or her accepted view. Such individuals tend to compartmentalize their beliefs in such a way that conflicting concepts from different sources of authority can exist in relative iso­lation from each other and therefore remain uncriticized by the believer.

In contrast, an individual with an open belief system respects the power of author­ity but not to the extent of absolute accep­tance. The open eye system is characterized by assessing information from authority in comparison to information from other sources. 'A person with an open system ac­tively seeks out ideas from other perspec­tives. Conflicting concepts are not kept in isolation from one another but are tested through application to resolve discrepancies. The open person does not understand the world as threatening.

This scale was developed to measure any type of dogmatism, not just that of a religious nature. The items were devised in order to measure the general be­lief system of the respondent and not the specific content of his or her beliefs. The author maintains that the distinction be­ tween measuring the general belief orienta­tion versus the specific belief content is the key in separating the Dogmatism Scale from the Authoritarianism, or F, Scale (Adorno et al., 1950). The Dogmatism Scale measures individual intolerance and general authori­tarianism.

As originally designed, the Dogmatism Scale contained 57 items (Form A). After four successive revisions (Forms B through E) and the use of 89 different items, the final form (Form E) contains 40 items (see the Appen­ dix). Though all forms are available for re­ search, Form E has been most extensively used and, unless otherwise indicated, is the form discussed in this review. The test is scored on a 6-point scale ranging from +3 to -3, with the O point omitted. The respondent indicates relative agreement (to +3) or dis­ agreement (to -3) with each item. For scoring purposes, the scale is converted to a +I to +7 scale by adding the constant 4 to each item score. The total score on this scale is simply the sum of the scores obtained on all items, with a high score indicating a dogmatic or closed belief system. No items are negatively worded. The range of scores for Form E is 40 to 280. Rokeach maintains that this scale is equally valid for research in the Soviet Union and other Eastern European countries.

The test is self­ administered and takes approximately 20 minutes to complete. Though the required reading level was not established, normative data were collected not only from college students but also from British workers at an automotive plant and from a VA domiciliary. No other special instructions or admin­istrator skills are necessary.

Normative data (re­ ported in Rokeach, 1960) for the first four versions of the scale included three separate samples from Michigan State University (one group for Form A; two groups for Form C), a sample from two New York City colleges (Form B), a group from Purdue University (Form C), and British students from Univer­sity College in London and Birbeck College (Form D). Form E involved samples again from the University College in London and Birbeck College, five sample groups from Ohio State University, a sample from Michi­gan State University, and three samples of destitute veterans from a New York State VA domicilary. The normative data are thus based on a wide variety of respondents.

The total Form E sample consisted of 508 individuals. Mean scores for this version ranged from a low of 141.3 (one sample of Ohio State students) to a high of 183.2 (one sample of veterans). Among American col­lege students only, the range was far more re­stricted (141.3 to 143.8). English students scored higher (152.8) than American students but this may be due, in part, to the existence of Communist students found in the British college sample who scored higher in dogma­tism than other political groups (Rokeach, 1960, p. 91). Standard deviations for Form E were quite consistent among the sample groups, ranging from 22.1 to 28.2.

One purpose of the scale's revi­sions was to increase Reliability (Rokeach, 1960). The highest reliability coefficient (.91) was found in Form D. Form E, the form used as the basis of review here, had reliability coefficients ranging from .68 to .93 among the various normative samples. Rokeach (1960) maintains that these relia­bilities are satisfactory given the broad range of items, many apparently unrelated to each other, covered by the scale (p. 90).

The method of "Known Groups," a form of concurrent validity, was used to as­sess the validity of this scale. Two studies, which obtained apparently contradictory re­sults, were conducted. In the first study graduate faculty in departments other than psychology at Michigan State University were asked to select non psychology gradu­ate students whom they would describe as having either open or closed belief systems as defined by Rokeach. Sixteen subjects judged by their professors to be high in dog­matism and 13 subjects judged to be low were selected and paid for their participa­tion. The students were administered the Dogmatism Scale along with the Opiniona­tion Scale (Rokeach, 1956), the Authoritar­ian (F) Scale (Adorno et al., 1950), and the Ethnocentrism (E) Scale (Adorno et al., 1950). The results showed no difference be­ tween the two groups on any of the scales.

The second study was carried out in the same fashion as the first except psychology students selected the subjects from acquain­tances of theirs who were not studying psy­chology. Ten subjects judged to be ex­tremely high in dogmatism and ten that were judged to be extremely low in dogma­tism were used. The results showed a highly significant difference between the two groups (p = .01) in the predicted direction.

The author, although admitting there may be other reasons, accounts for these different findings by suggesting that the student-pro­fessor relationship produces a "masking" ef­fect on the professors' judgments. Students may be more guarded in their interactions with professors than with peers, mixing a re­spectful attitude with an enlightened facade.

Please indicate the degree to which you agree or disagree with each statement using the fol­ lowing rating scale.