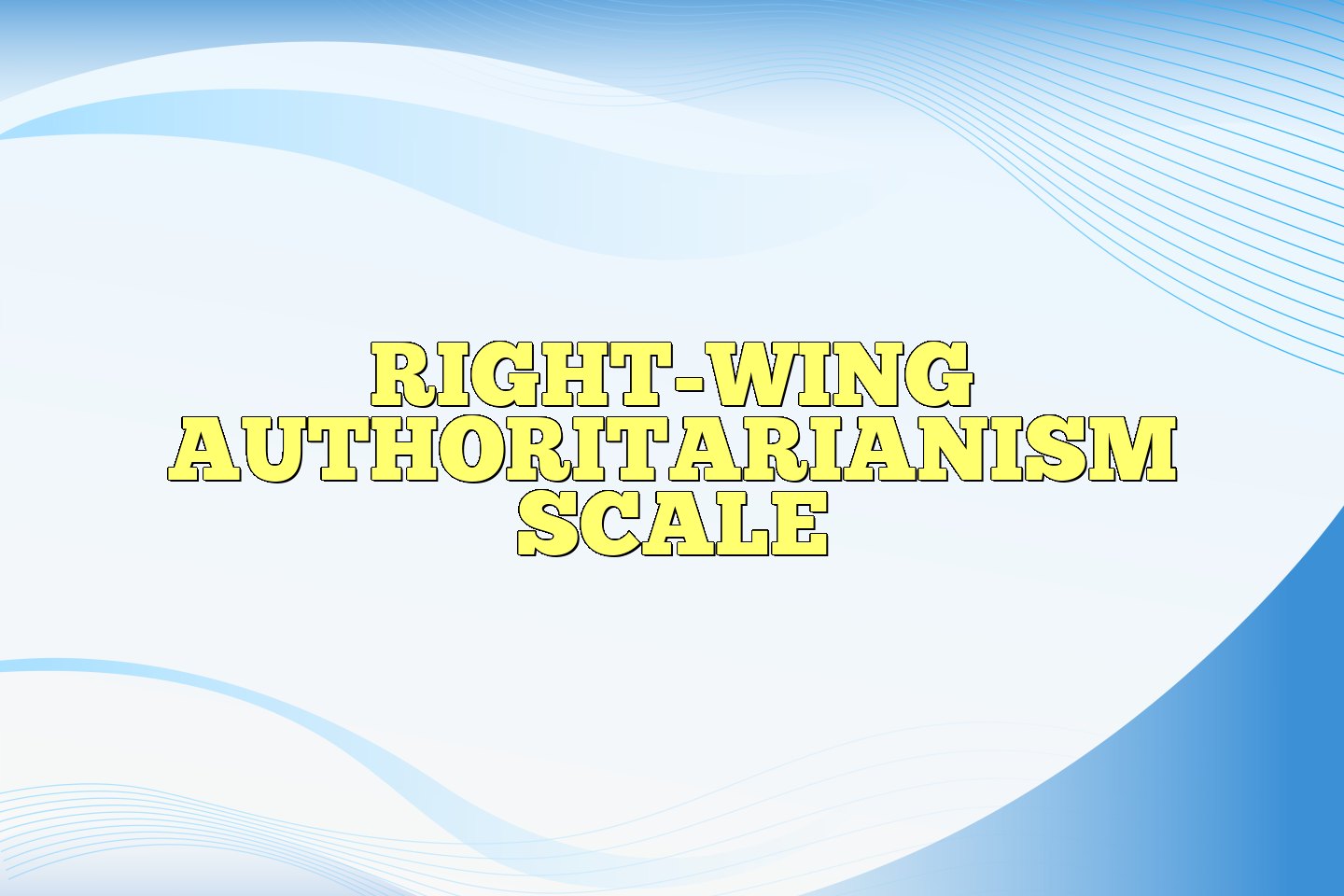 The Right-Wing Authoritarianism (RWAS) Scale is intended to measure the trait of authoritarianism in the service of es­tablished authority. In Altemeyer's (1988, p. 2) own words, right-wing authoritarianism means the combination of the following three attitudinal clusters:

It should be emphasized that RWA is rep­ resented by the combination of these three attributes, not by one of them only. For ex­ ample, someone who happens to hold conventional views is not automatically, neces­sarily authoritarian. But someone who shows conventionalism (in the sense given above) knit together with the other attitudes would be seen as right-wing authoritarian.

The stimulus for the development of the RWA scale was the pioneering work on The Authoritarian Personality (Adorno, Frenkel-Brunswick, Levinson, & Sanford, 1950). Conceived in psychoana­lytic terms, the high authoritarian was seen as being possessed of unconscious hostility and thus susceptible to fascist propaganda. This idea was a theoretical milestone be­ cause it was the first time that psychologists stated a compelling rationale for a possible link between personality and ideology. However, the F Scale, used to assess the authoritarian personality, contained method­ological flaws, and by the 1960s much of the research centered on problems with the scale rather than on the theory that underlay it.

Research on the topic waned until Alte­meyer developed a simpler conceptualiza­tion of authoritarianism and a suitable scale to measure it. The RWA Scale, which, un­ like the F Scale, is balanced against re­sponse sets, has been modified annually since its first publication in 1981. This re­ view addresses the 1994 version.

It is often asked whether there is also an authoritarianism on the left. Altemeyer (1996) has recently advanced such a con­ceptualization and research bearing on it. Thus far, however, left-wing authoritarian­ ism has proven unrelated to religious vari­ables, whereas the right-wing version has a rich history of connections.

The 1994 RWA Scale contains 34 state­ments but only the last 30 are scored. Each item is answered on a 9-point Likert scale for which the answer options range from -4 (very strongly disagree) to +4 (very strongly agree). A neutral answer is indicated by a 0. A final score is obtained by adding a con­stant of five to all answers. The individual scores are then summed to yield a total score. RWA scores can range from a low of 30 to a high of 270, with a theoretical mid­ point of 150.

The scale takes approximately 20 minutes to complete. No special training or instructions are required. The instructions on the scale are clear and self-explanatory.

While the initial standardization group consisted of Univer­sity of Manitoba students in the early 1970s, cross-validating studies quickly extended the findings to many other North American student populations and even parents of uni­versity students. Tens of thousands of peo­ple have since completed the scale, resulting in a large volume of data collected from dif­ferent samples and in different cultures and languages. The scale has shown robustness across its versions and the various samples, even internationally after being translated into Russian, German, and Spanish.

Altemeyer (1996) cites over 30 studies for which the internal consistency reliability ranged from .81 to .95. The only exception was a coefficient of .43 among 400 Xhosa-speaking students who answered the scale in English. Generally speaking, the reliability of the RWA Scale has increased to about the .90 level or better as a result of test improvements over the years. Test­ retest reliability coefficients for students have ranged from .95 over a one-week inter­val to .85 for 28 weeks between testings.

The combined evidence suggests that the RWA Scale measures what it is in­ tended to measure. High RWAs tend to ad­ here to traditional religious teachings more than low RWAs, suggesting that the scale is sensitive to the attribute of conventionalism. This finding occurs for samples of Chris­ tians, Palestinian Muslims, and Orthodox Jews. RWA is positively correlated with Christian orthodoxy and dogmatism. In sev­eral studies, RWA scores correlated between .66 and .75 with religious fundamentalism. Similar data show that high RWAs tend to be more prejudiced, more willing to use punitive measures, and more likely to in­ form established authorities of others who violate laws. People high in RWA also tend to endorse statements at Stage 2 (mythic-literal faith) and Stage 3 (synthetic-conven­tional faith) in Fowler's theory of faith de­velopment. Altemeyer (1996) has recently concluded that religious fundamentalism is largely the right-wing authoritarian 's re­sponse to the religious impulse. Overall, the data fall into a pattern of what would be ex­pected on theoretical grounds.

Instructions: This survey is part of an investigation of general public opinion concerning a va­riety of social issues. You will probably find that you agree with some of the statements, and disagree with others, to varying extents. Please indicate your reaction to each statement by marking your opinion next to the statement, according to the following scale:

If you feel exactly and precisely neutral about a statement, mark a "O'' next to it.

You may find that you sometimes have different reactions to different parts of a statement. For example, you might very strongly disagree (-4) with one idea in a statement, but slightly agree (+1) with another idea in the same item. When this happens, please combine your re­ actions and write down how you feel "on balance" (that is, a -3 in this example).

* Item is worded in the contrait direction, that is, the right-wing authoritarian response is to disagree.

A-4 to +4 response scale has been used on the RWA Scale since 1980, rather than the usual -3 to +3, be­ cause experiments have shown it produces (marginally) higher reliability. Either a 9-point or a 7-point re­ sponse scale appears to be superior to the 5-point scale Likert (1932) invented. A 3-point response scale ("disagree-?-agree") seems to damage appreciably a scale's psychometric properties among populations capable of making finer distinctions (Altemeyer, 1988, pp. 39-42).

The following book presents the 1994 RWA Scale. See Altemeyer's 1981 and 1988 books in the references below for ear­lier versions of the scale.

Altemeyer, B., & Hunsberger, B. (1992). Au­ thoritarianism, religious fundamentalism, quest, and prejudice. The International Journal for the Psychology of Religion, 2, 113-133.

Hunsberger, B. (1996). Religious fundamental­ ism, right-wing authoritarianism and hostility to­ ward homosexuals in non-Christian religious groups. The International Journal for the Psychol­ogy of Religion, 6, 39-49.

Hunsberger, 8., Pratt, M., & Pancer, S. M. (1994). Religious fundamentalism and integrative complexity of thought: A relationship for existential content only? Journal for the Scientific Study of Re­ligion, 33, 335-346.

Leak, G. K., & Randall, B. A. (1995). Clarifica­tion of the link between right-wing authoritarianism and religiousness: The role of religious maturity. Journal for the Scientific Study of Religion, 34, 245-252.