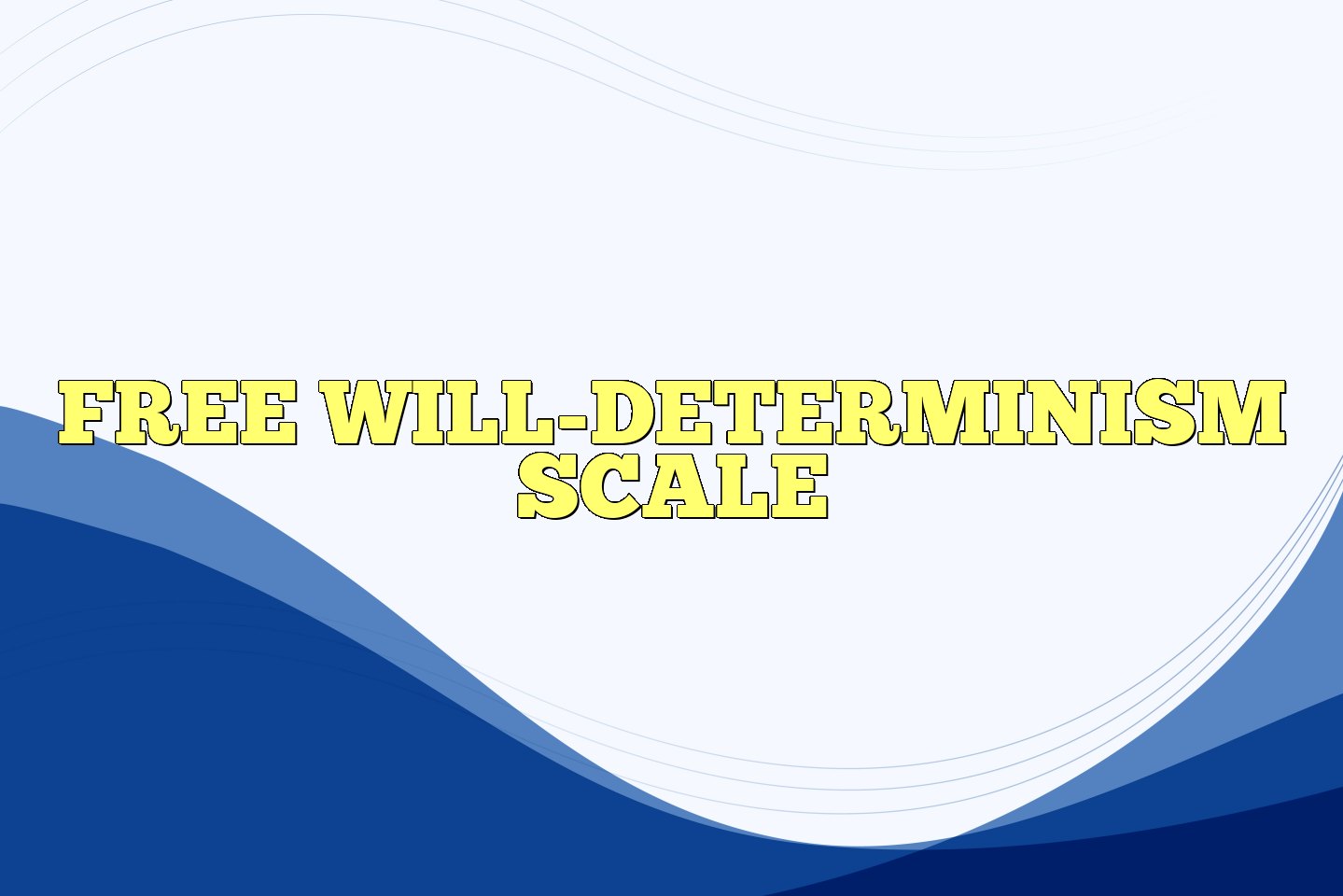 The Free Will-Determinism Scale is a 19-item scale with some items adapted from earlier work by Viney, Wald­ man, and Barchilon (1982). The items are presented in a Likert-type format with re­sponses ranging from (1) "strongly agree" to (9) "strongly disagree."

The scale yields three scores. Some items assess religious-philosophical determinism, "the belief that a force such as God or fate acts to control our behavior" (Stroessner & Green, 1990, p. 791). Others measure psy­chosocial determinism, "the belief that envi­ronmental factors determine our behavior" (Stroessner & Green, 1990, p. 791). The lib­ertarianism items measure the role that free will and choice play in actions and out­ comes.

The scale is an easy-to-administer paper-and-pencil instru­ment. The language is straightforward and simple. The scoring system utilizes numeri­cal indicators of agreement-disagreement presented in a Likert format. The scale is appropriate for individuals of normal intelli­gence from the teen years on. The scale items do not address the issue of genetic or biological determinants of behaviors. This is a shortfall of the present scale.

The original study was broad in that 507 students provided the data; the study was narrow in that the range of diversity was somewhat restricted: stu­ dents attending a private liberal arts spon­ sored by a mainline Protestant denomina­tion located in the midwestern United States.

Stroessner and Green (1990) conducted a factor analysis (principal axes with varimax rotation) to determine the in­ ternal structure of the 19-item scale. Three primary factors were found, each conform­ing to one of the predicted dimensions. Each item loaded on only one factor; two items that contributed to no factor were not scored and were dropped from further considera­tion.

No other measures of reliability were re­ ported. Test-retest reliability should be easy to establish with the type of items included in the scale.

The items are transparent and thus lack of face validity is of no problem to re­spondents. No attribution bias was found in the study. Respondents judging self made the same type of judgment (i.e., punitiveness, rehabilitation, locus of control) as the re­spondents judging another. This represents a case or scale in which the fundamental attri­bution error was not reported. This in itself is unique.

The relationships between types of deter­minism and locus of control were interest­ing, yet unpredicted. Libertarians and reli­gious-philosophical determinists exhibited more internal locus of control than did psy­chosocial determinists. Individuals endors­ing a religious-philosophical deterministic belief exhibited more external locus of con­trol than did those low in the belief. These findings hint for construct validity. The rela­tionship to punitiveness for actions was mixed: individuals with extreme views in both directions were more punitive than in­dividuals favoring a moderate belief.

Subsequent Research: The authors have not conducted further research using the scale, nor are they aware of other re­searchers who have employed the scale in their research. The scale and questions that the issue of free will determinism raises provide a potentially rich source of future research with issues relating to such diverse aspects of personality as religious experi­ence, locus of control, attribution of respon­sibility and blame, and the limitations of self-control.