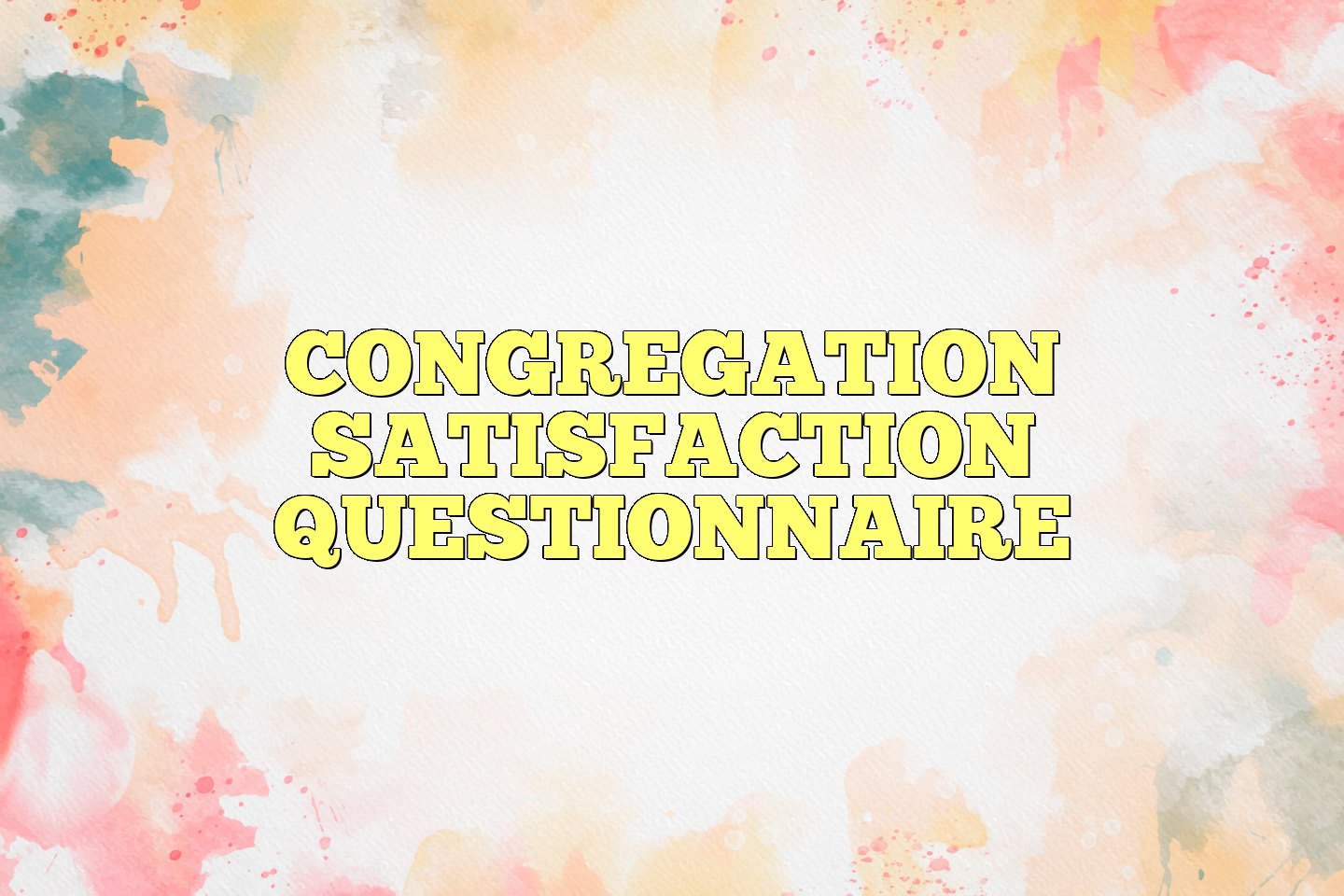 This scale was developed to measure member satisfaction with the church or synagogue. Several dimensions of member satisfaction were initially identified through interviews with clergy and congre­gation members from Christian and Jewish religious institutions. A content analysis of the tape-recorded interviews resulted in the following eight dimensions, which assessed satisfaction with leaders, members, facili­ties, services, education, policies, special programs and activities, and clergy. Approx­imately 20 words or short phrases were ini­tially generated to describe each dimension. The revised scale contains seven dimen­sions (i.e., religious services, church mem­bers, church leaders, special programs and activities, religious education for children, religious education for adults and church fa­cilities). For each dimension, respondents are asked to rate how accurately IO words or short phrases describe their congregation. Questions are constructed on a 5-point Lik­ert scale with response possibilities ranging from l (not at all descriptive) to 5 (com­pletely descriptive). Items include both pos­itive and negative descriptors. Scores for each dimension are computed by reverse coding the negative items, and computing a mean score for each item (i.e., adding the scores of all members on a particular item and dividing by the number of responses).

Item averages are then added together and divided by the total number of items in the scale.

The Likert-type item format and the short descriptors for each satisfaction dimension make this ques­tionnaire relatively easy to complete. The instructions and the purpose of the scale (i.e., to measure member satisfaction on a variety of dimensions) are clear. The scale takes no special training to administer, score, or interpret. As there is no ideal score for each of the scales, interpretations can be made using the absolute scores from the questionnaire. Higher scores are indicative of greater satisfaction, whereas lower scores indicate areas in need of improvement to in­ crease member satisfaction. Confidentiality of responses should be guaranteed to help ensure that the questions are answered in a forthright manner.

The CSQ was normed on 13 Christian congregations, but is also applicable with synagogues. Five ad­ditional congregations (3 Jewish and 2 Protestant) declined to participate. The congregations were diverse in size (range 100 to 6,200), racial composition (4 black and 9 white congregations), denomination (e.g., Baptist, Roman Catholic, African Methodist Evangelical), and average length of mem­bership (range 4 to 35 years). The sample consisted of 353 members (37% male; 79% white) with a mean age of 44 and average education of some college or trade school. This sample was comparable to the total population of the 13 congregations on iden­tifiable characteristics, but no information was available to compare the level of in­volvement of the sample to the total popula­tion.

of .67. Cronbach 's alpha coefficients for the other seven scales ranged from .80 (Clergy) to .90 (Education). A subsample of partici­pants (n = 56) completed the CSQ 4 weeks after the initial administration. Test-retest reliabilities were all acceptable and ranged from .62 (Clergy) to .82 (Policies).

Several revisions were made to the origi­nal scales: the Policies and Clergy Scales were dropped because they did not discrim­inate between congregations as well as the other scales; additional items were added to some scales (e.g., Facilities) to increase the internal consistency of the scale; the Educa­tion Scale was divided to assess the reli­gious education of adults and children sepa­rately; and the response options were changed from a 3-point to a 5-point Likert scale to alleviate skewness. The revisions resulted in coefficient alphas that were mod­erately high: Religious Services, .85; Mem­bers, .85; Special Programs and Activities, .79; Child Education, .85; Adult Education,.88; Leaders, .82; and Facilities, .94. The CSQ seems to be reasonably reliable in as­sessing congregation satisfaction.

To examine how well the CSQ fits with existing theory and research, the au­thors investigated the scale's convergent and discriminant validity and how it corre­lates with demographic variables and other constructs. Along with the CSQ, the partici­pants answered a single item that assessed each of the scale constructs. Correlation ma­trices were computed between the CSQ and its corresponding single item measure (het­ero method), between the individual CSQ scales (monomethod), and between the sin­gle item measures (monomethod).

Convergent validity was established using correlations between each of the scales and its single item counterpart. All correlations were significant (p < .001), and ranged from .32 (Facilities) to .43 (Leaders; Clergy).

Using criteria established by Campbell and Fiske (1959), divergent validity was examined by three criteria. (a) Correlations of the same satisfaction construct measured by the two different methods should be higher than the correlation between that construct and any other construct (mea­sured differently). In the analysis of the CSQ, this criterion was met in 95% of cases. (b) Correlations between the same satisfaction construct measured differently should be higher than the correlation be­ tween that construct and any other con­ struct (measured in the same way). Little support was found using this criterion, as it was met only 31% of the time. (c) Kendall's coefficient of concordance was used to examine the pattern (rank order) of correlations in each of the monomethod and heteromethod correlation matrices. The Kendall's Coefficient (.77) was significant, indicating a comparable pattern of correla­tions between the two methods of assessing church satisfaction. Although the second criterion was not met, the first and third standards provide support for the divergent validity of the instrument.

Each of the scales was significantly cor­related with at least one other demographic and/or religiosity measure (i.e., frequency of church activities, frequency of prayer, age, and number of church members known). For instance, satisfaction with reli­gious services was positively related to fre­quency of church attendance and frequency of prayer outside of church. Furthermore, each of the scales had a relatively different pattern of correlations with other variables, suggesting that the scales measured distinct dimensions of church satisfaction. Social desirability had no influence on these corre­lations. Overall, the CSQ appears to validly assess congregation satisfaction.

Listed below are several words and phrases that may or may not describe a specific area of your church. Please: